Chelyabinsk, Russia: Fighting in his own hometown for the first time in his professional boxing career, WBO World Light Heavyweight Champion Sergey “Krusher” Kovalev (33-3-1, 28 KOs) takes on the WBO’s mandatory challenger, Anthony Yarde (18-0, 17 KOs) of the UK, on Saturday, August 24th at the Traktor Arena in Chelyabinsk, Russia. The event will be presented by RCC Promotions, Main Events, Krusher Promotions and Queensberry Promotions. This will be Kovalev’s 16th consecutive world title bout. That is more than the three other light heavyweight champions combined. 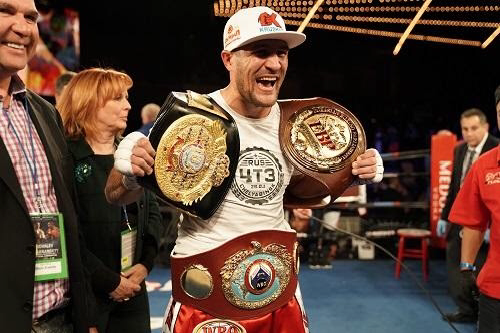 The Three-Time World Light Heavyweight Champ, Sergey “Krusher” Kovalev, explained the significance of this fight. “I am thrilled to fight for the first time in my home town of Chelyabinsk. It is a dream to defend my WBO title in front of all my friends and family back home. Thank you to Igor Altushkin, Egis Klimas and Main Events for making this dream a reality and thank you to Anthony Yarde for agreeing to fight in my backyard.”
Challenger, Anthony Yarde, replied, “I am more than happy to achieve my goal in Russia and I think it is only right that a great world champion such as Kovalev is given the opportunity to defend in his home country. He has earned that right. What I know is that on Aug. 24 another World Title belt will be under British ownership and I will have done it the hard way-one that nobody will be able to question” He continued, “This is my time and I am going to show the world what I am all about. Everything has fallen perfectly into place for me. This will be my coronation as world champion and I am going to realize my dream by beating the most decorated of the current world title holders.”
“We are so pleased that Sergey, one of boxing’s greatest all-time road warriors, will finally get the chance to defend his title in his own hometown, where he grew up and where his most-devoted fan base resides,” said promoter Kathy Duva of Main Events. “I can only imagine how excited Sergey’s friends and neighbors will be to finally get the chance to see him perform in person. We are most grateful to Igor Altushkin, RCC Promotions, Queensberry Promotions and Anthony Yarde for making this great event possible.”
Kovalev’s long-time manager and friend, Egis Klimas added, “Sergey has wanted to fight in his hometown for a long time. But he has always been the one to go and fight in another fighter’s backyard. Now that he is back where he rightfully belongs, on top of the light heavyweight division, it is exciting that he finally gets this opportunity. Thank you to RCC Promotions, Igor Altushkin, Queensberry Promotions and, of course, Anthony Yarde for making this fight possible.”
“It is a fantastic opportunity for Anthony and he has earned his shot by working his way to the No.1 spot in the rankings. He has showed what he is all about by being prepared to go into Kovalev’s backyard and it demonstrates the confidence he has in his own ability,” explained Yarde’s promoter, Frank Warren. “Everybody knows Kovalev is a tremendous puncher and a fearsome presence in the ring. It is something we first saw over here when he fought Nathan Cleverly, and he has continued to operate at the very highest level. Anthony possesses tremendous self-belief and we back him to come away with the spoils. But whatever does happen in the fight, it is one that he will take a lot of valuable experience from.”
The fight will be seen on Match TV in Russia, BT Sport in the UK and US distribution information will be released soon.