INDIO, CALIF. (July 18, 2019): A huge battle between two undefeated super lightweight prospects heads to the Coachella Valley as Luis Feliciano (12-0, 8 KOs) takes on Genaro “El Conde” Gamez (9-0, 6 KOs) in a 10-round main event of the Aug. 22 edition Golden Boy DAZN Thursday Night Fights at Fantasy Springs Casino in Indio, Calif. The fights will be streamed live on RingTV.com and on Facebook Watch via the Golden Boy Fight Night Page beginning at 10:00 p.m. ET/7:00 p.m. PT. The series will also be available on regional sports networks around the nation.
Feliciano is a 26-year-old boxer who is defined by his humility outside the ring and his dangerous killer instinct in the ring. The native of Milwaukee, Wis. has his roots Puerto Rico, where he has developed a strong following after fighting there several times since debuting as a professional in 2017. Feliciano, who is under the tutelage of the renowned trainer Ben Liraand managed by Ralph Heredia, is ready to take his career to the next level. 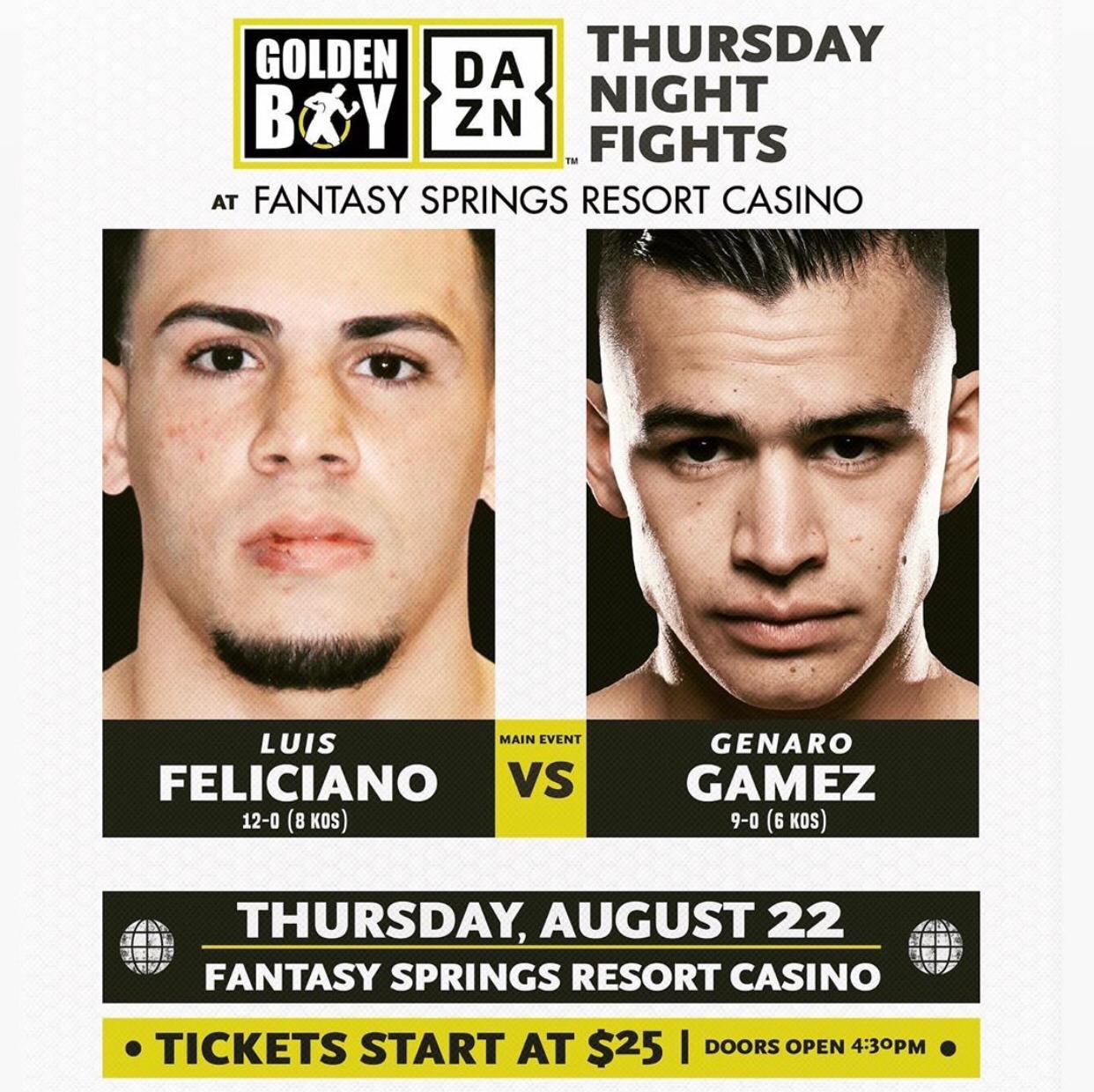 “I’m more than ready for my career to take off,” said Luis Feliciano. “I’ve been staying really busy fighting here in the United States and in Puerto Rico. That’s going to make the difference in this fight, along with my skills. This fight is going to make me into a contender, so I’m going to work very hard to get my hand raised.”
Gamez is a native of San Diego, Calif. who possess an explosive style that combines speed and power. Since making his debut in 2016, Gamez has maintained an unblemished record, though he has had some issues making weight in previous fights. The 24-year-old pugilist maintains that his issues are in the past, and he’ll now fight at 140 pounds. Gamez will take on toughest test of his career in a battle that will demonstrate which one of these young fighters is destined for a world title shot.
“I’m back and I’m stronger than ever,” said Genaro Gamez.“I’ve been waiting for an opportunity like this, so I’m excited to demonstrate my skills. When I have a big challenge, I perform even better, so I look forward to obtaining a great victory against Luis Feliciano.”
In the co-main event, Blair “Flair” Cobbs (11-0-1, 7 KOs) of Las Vegas, Nevada will fight against Steve “Manos de Oro” Villalobos(11-0-1, 9 KOs) of Mount Vernon, Wash. in a 10-round welterweight battle.
Kevin Ventura (10-0, 8 KOs) of Omaha, Nebraska will participate in a six-round lightweight fight against Brian Gallegos (6-1, 4 KOs) of Las Vegas.
Raul “Cougar” Curiel (6-0, 4 KOs) of Tamaulipas, Mexico will fight Chris “Milly” Ousley (11-0, 9 KOs) of Chicago, Illinois in a six-round super welterweight bout between two Golden Boy prospects.
Richard “Kansas Kid” Acevedo (5-0, 5 KOs) of Garden City, Kansas will participate in a six-round super welterweight fight.
Anthony Garnica (3-0, 2 KOs) of Oakland, Calif. will fight in a four-round super bantamweight clash.
Opponents for the undercard will be announced shortly.