ORANGE, Calif. (June 25, 2019) – Junior welterweight Pedro Melo (11-0, 7 KOs) makes his first appearance of the year as the headlining attraction of “Path to Glory” this Friday from Omega Products International in Sacramento, Calif.
Moreno, a former Silver Gloves Champion and U.S. Junior Olympic team member, faces fellow prospect Gilberto Espinoza (11-1, 6 KOs) of Tijuana, Mexico in the 8-round main event.
Moreno, 21, was born in the Mexican state of Jalisco, but his family relocated to Salinas, Calif. when he was five-years-old. One year later, they moved to Sacramento. Friday’s fight marks the second time Moreno will appear in front of his hometown fans. 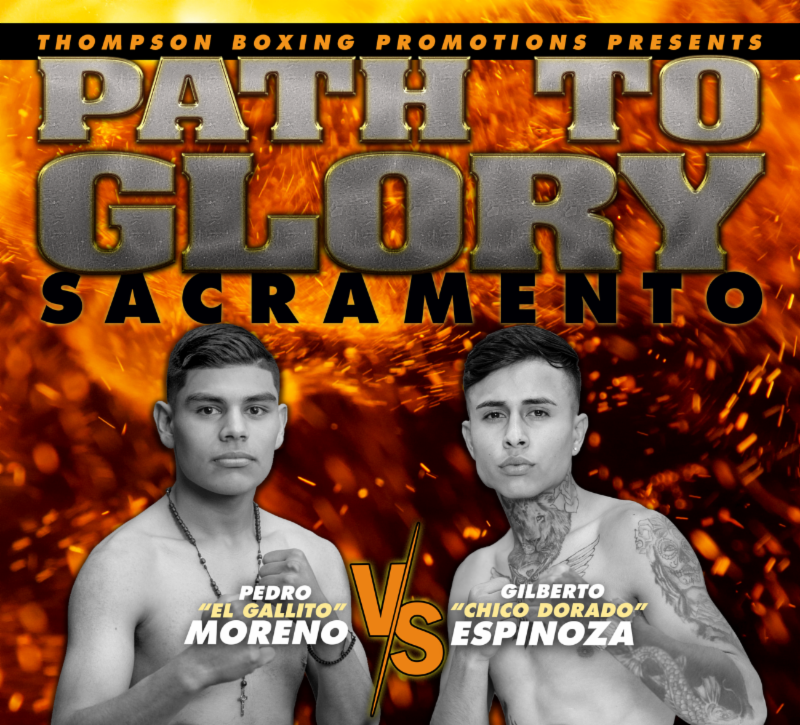 “I’m incredibly grateful for this opportunity,” said Moreno, who signed with Thompson Boxing last year. “Some boxers go their entire careers without fighting in their home city. It’s a big responsibility, but one that I’m ready for.”
The self-described boxer-puncher will receive a stern test from the equally young Mendoza. In previous fights, Mendoza has switched between orthodox and southpaw stances in an attempt to confuse his opponent. Moreno, who started boxing at age twelve, isn’t concerned with any tricks he may see.
“I’ve seen a lot of styles in the amateurs and I spar with heavier guys,” Moreno said. “I just focus on what I need to do to get the win.”
Moreno’s last fight from Sacramento occurred from the same outdoor venue last June against the previously unbeaten prospect Luis Zarazua. Moreno landed clean shots in virtually every round and with his size advantage, looked comfortable fighting in close quarters.
Moreno, who started his career at lightweight but already has filled out to 140 lbs., will be the naturally bigger fighter come Friday night.
“I’ll be able to wear Mendoza down with my size,” Moreno said. “Especially if the fight goes to the pocket.  He’ll have to cover up more than he’d like.”
Tickets for “Path to Glory” are priced at $40, $60, & $100 and are available for purchase at ThompsonBoxing.com, or by calling 714-935-0900.
In the 6-round co-feature, welterweight prospect Loui Lopez (6-0, 3 KOs) of Corona, Calif. meets Dwain Victorian (5-4-1, 3 KOs) of Stanton, Calif. Lopez, 22, turned professional last year and registered five wins.
In other action, Sacramento native Manuel Jaimes Barreto (5-0, 5 KOs)looks to extend his knockout winning streak to six when he battles Alex Solorio (4-5, 1 KO) of Mexico (6-rounds). The bout will be contested in the lightweight division.
Featherweight Arnold Dinong (4-0, 1 KO) of San Mateo, Calif. fights Francisco Camacho (7-10-1, 3 KOs) of Mexico in a scheduled 4-round fight.
Junior lightweight and Sacramento local Will Villa (2-0) will fight an opponent to be named later (4-rounds).
In the “Path to Glory” show opener, lightweight Sebastian Salinas of Indio, Calif. makes his professional debut against Michael Gaxiola (4-16) of Modesto, Calif. (4-rounds).

All fights will be live streamed on TB Presents: Path to Glory via our Facebook page, YouTube channel and ThompsonBoxing.com. Beto Duran will handle blow-by-blow duties, while Doug Fischer provides expert, color commentary.
The livestream starts at 8:00 p.m. PT / 11:00 p.m. ET.
Omega Productions International is located at 8111 Fruitridge Road in Sacramento, CA 95826 and can be reached at 916-635-3335.

“Path to Glory” is presented by Thompson Boxing Promotions and sponsored by Everlast.
For more information, please visit ThompsonBoxing.com.
For regular updates on our fighters, events, and promotions, please check our Facebook Page, watch our YouTube channel on Thompson Boxing TV, and follow us on Instagram and Twitter @ThompsonBoxing.