LOS ANGELES (June 13, 2019): Seniesa “Superbad” Estrada (17-0, 7 KOs) overcame her toughest challenge yet as she defeated Gretchen “Chen Chen” Abaniel (18-11, 6 KOs) via technical knockout to defend her WBC Silver Light Flyweight Championship in the scheduled 10-round main event of the June 13 edition of Golden Boy DAZN Thursday Night Fights at Avalon Hollywood. Abaniel was not able to continue after the fourth round, handing Estrada the victory. 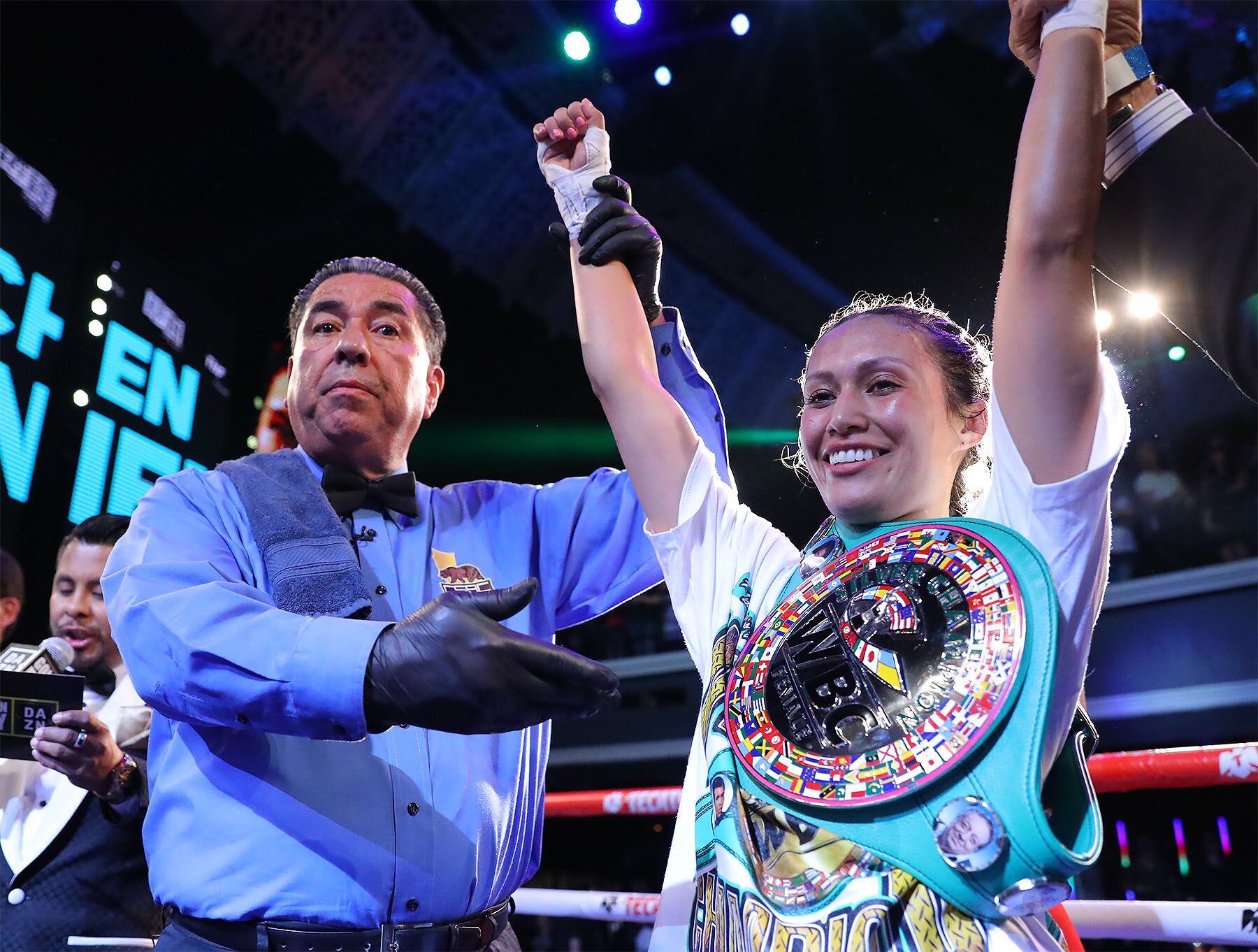 PHOTOS BY: TOM HOGAN FOR GOLDEN BOY PROMOTIONS
“Everyone knows about the rivalry between me and Marlen Esparza,” said Seniesa Estrada. “Eventually, that fight is going to happen. She can get it any time. For now, I want a title shot. I want to face Yesenia Gomez. Let’s make it happen in September.”
Armenian contender Azat Hovhannisyan (17-3, 14 KOs) overpowered Glen Porras (32-9, 20 KOs) of Cotabato, Philippines en route to a fourth-round technical knockout in a super bantamweight battle originally scheduled for 10 rounds. The fight was stopped at 2:08 of the aforementioned round. 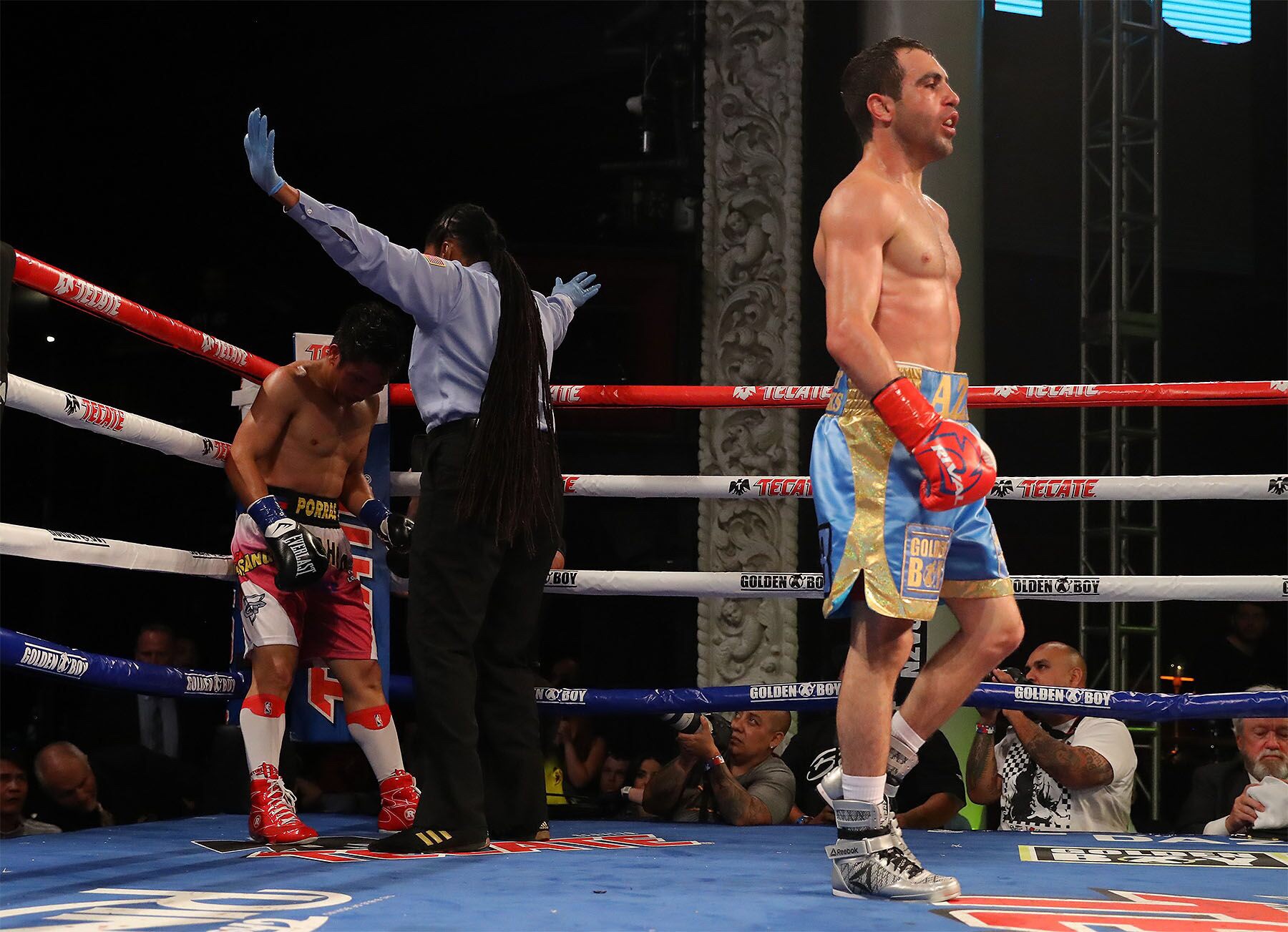 “I had a great preparation,” said Azat Hovhannisyan. “I sparred very hard and everything went well in camp. I’m boxing more in my fights, but I also bring a lot of action. I want T.J. Doheny, and then I want Danny Roman, Rey Vargas [again] and Emanuel Navarrete.”
Carlos Caraballo (12-0, 12 KOs) of Guayanilla, Puerto Rico defeated Esteban Aquino (12-7, 7 KOs) of La Romana, Dominican Republic via knockout in the second round of a super bantamweight fight originally slated for six rounds. Caraballo won with time of 1:52 of the aforementioned round. 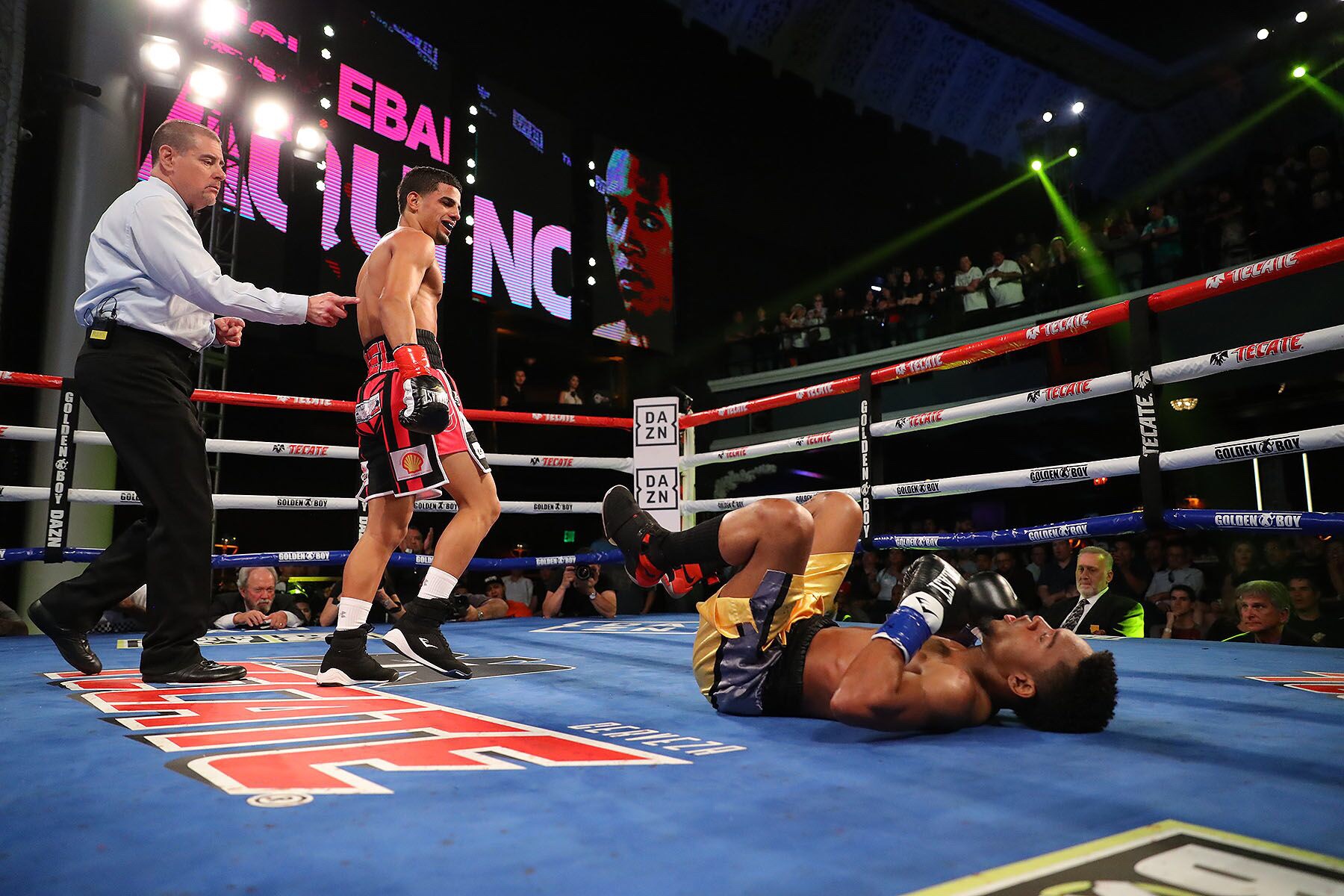 “That’s what I was trying to do, get a spectacular knockout,” said Carlos Caraballo. “I have the power to do it, and that’s what I trained for at the gym. I noticed he wasn’t really attacking in the second round. We take things round by round, so I saw the opportunity and took it.”
Cesar Valenzuela (15-6-1, 5 KOs) of Phoenix, Arizona scored an eight-round unanimous decision victory against Christian Gonzalez (19-4, 15 KOs) of Buena Park, Calif. in a lightweight clash. Valenzuela won with scores of 73-79, 73-79, and 73-79. 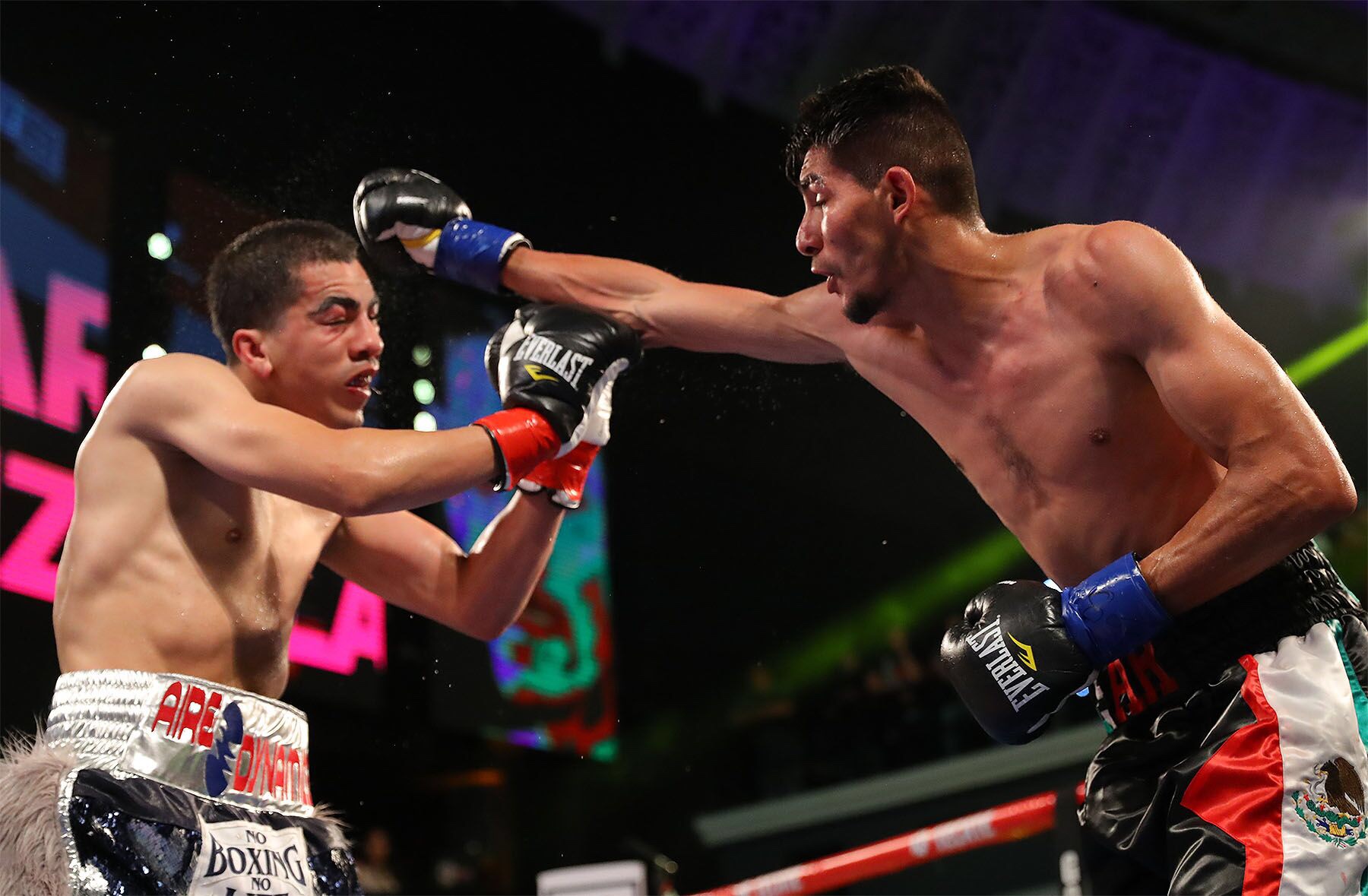 “We knew he was a hard hitter,” said Cesar Valenzeula. “We knew he would come in throwing wild punches and that he had no defense, footwork or head movement. So, I used my distance, jab, and footwork. I also was able to get him with my straight right hand, which he could not see coming.”
Bektemir Melikuziev (1-0, 1 KO) made a successful professional debut by stopping Marin Rios (23-20-4, 13 KOs) of La Pampa, Argentina via knockout in a scheduled six-round light heavyweight fight. Melikuziev ended at matters at 1:39 of the first round. 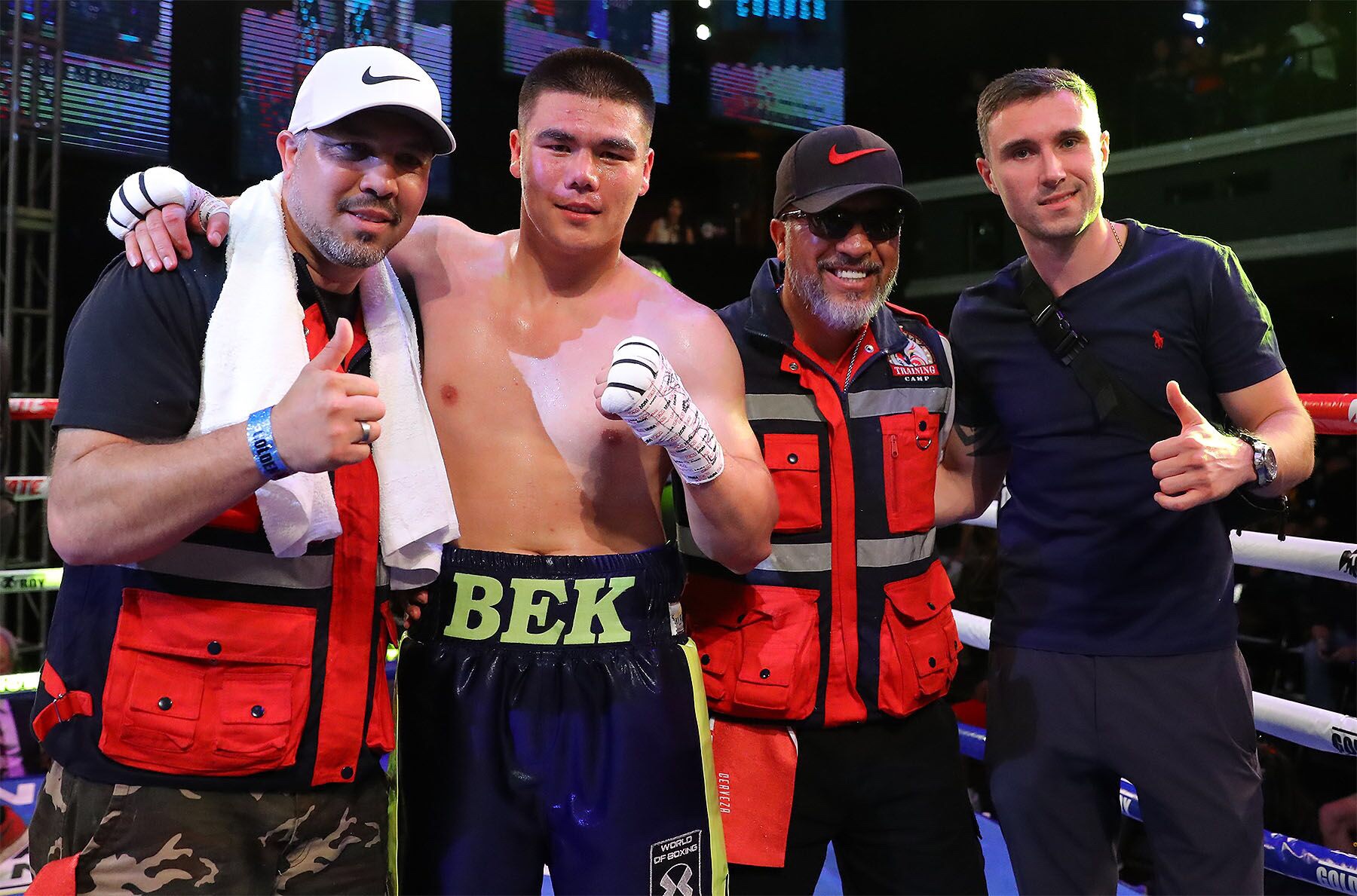 “What happened is what always happens,” said Bektemir Melikzuiev.“I wanted the toughest challenge out there, and I went in there and took care of business. Now it’s time for me to keep going and stay busy.”
Estrada vs. Abaniel was a 10-round fight for the WBC Silver Light Flyweight Title presented by Golden Boy. The event was sponsored by Tecate,”THE OFFICIAL BEER OF BOXING.” The fights took place Thursday, June 13 at Avalon Hollywood. The event was streamed live on RingTV.com and on Facebook Watch via the Golden Boy Fight Night Page. The series is also available on regional sports networks around the nation. To see when and where the series is available in your area, click here.
For more information, visit www.goldenboypromotions.com and DAZN.com. Follow on Twitter @GoldenBoyBoxing and @DAZN_USA. Become a fan on Facebook at www.facebook.com/GoldenBoyBoxing and https://www.facebook.com/DAZNUSA/. Follow on Instagram @GoldenBoyBoxing and @DAZN_USA. Follow the conversation using