LOS ANGELES (Sept. 5 2019): Explosive Armenian contender Azat ‘Crazy A’ Hovhannisyan (18-3, 15 KOs) earned a shot at the WBA Super Bantamweight World Title by defeating Franklin Manzanilla (18-6, 17 KOs) of Caracas, Venezuela via knockout at 2:58 of the fourth round of a scheduled 12-round eliminator fight in the main event of the Sept. 5 edition of Golden Boy DAZN Thursday Night Fights at the Belasco Theater in Los Angeles. The event was streamed live on RingTV.com and on Facebook Watch via the Golden Boy Fight Night Page. The series is also available on regional sports networks around the nation. 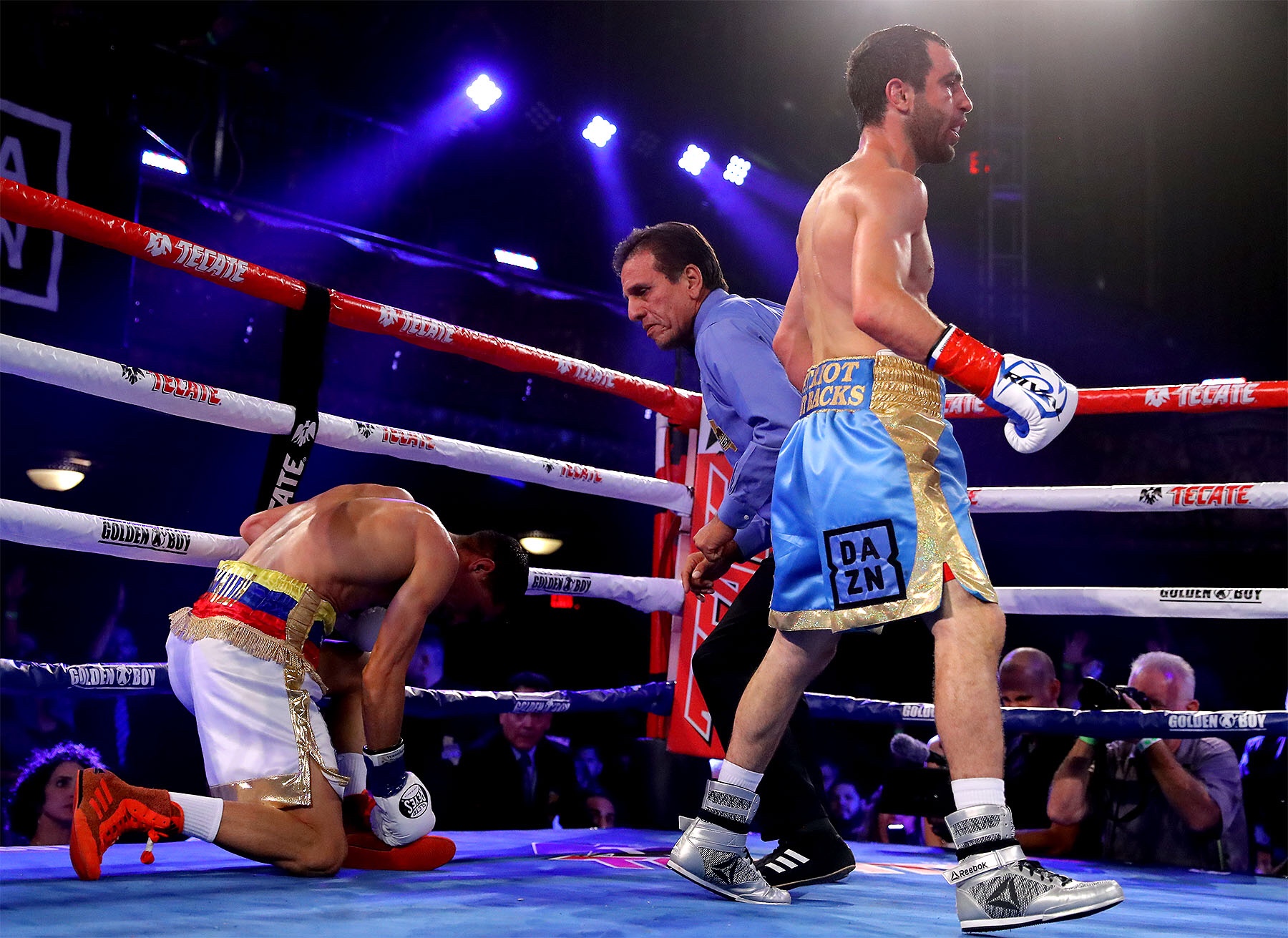 PHOTOS BY: TOM HOGAN FOR GOLDEN BOY PROMOTIONS
“This was a very easy fight at first,” said Azat Hovhannisyan. “I could have made it a 12-round fight, and he would not have touched me. But wanted to make it a tough fight. I wanted to make it an exciting fight. I didn’t even feel his punches. If Rey Vargas doesn’t want a rematch and Danny Roman is injured, then I want Emmanuel Navarrete.”
“We knew that Azat Hovhannisyan was a good fighter,” said Franklin Manzanilla. “We also knew he was a tough warrior. But I’m a man who likes to clash too. I tried to box, but I had to fight because that’s what people pay to see. It was the wrong game plan, but either way I’m going to rest and see what opportunities are out there for me. I’ll be back.”
In the co-main event Edwin Valentin (9-0, 8 KOs) of Salinas, Puerto Rico defeated Julio Bassa (21-9, 13 KOs) of Monteria, Colombia via unanimous decision in an eight-round lightweight battle. Valentin won with three scores of 79-73. 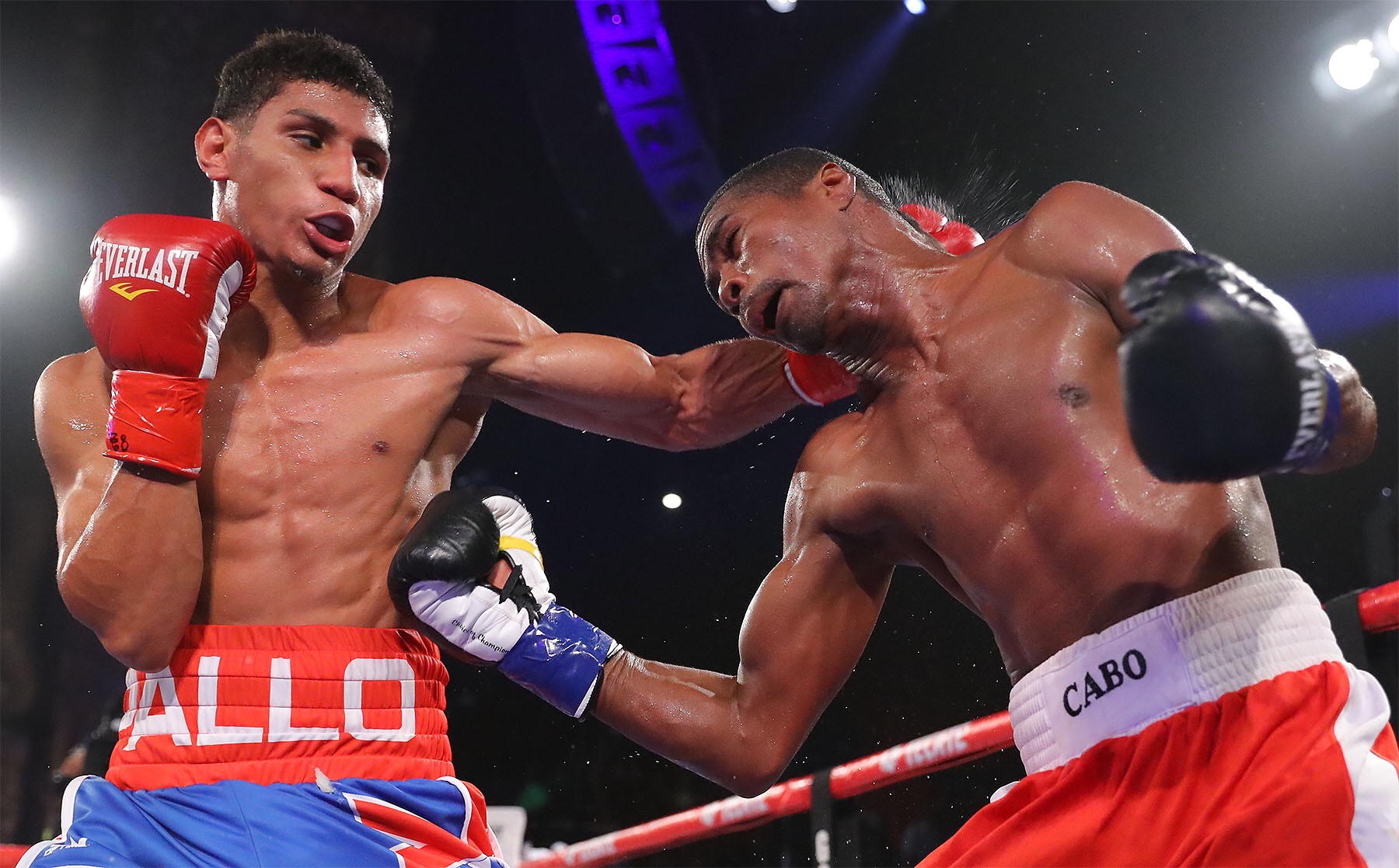 “If feel happy. It was a fight that lasted the distance,” said Edwin Valentin. “I’m happy with Julio for giving me the opportunity. It was a fight with an experienced warrior. This fight will help on the long run because there’s big things coming, if God permits it. Now, I’m to go back home to Puerto Rico and continue to work hard. I want to give thanks to all my people, my team who did an excellent job. Yes, we need to make some adjustments, but we’re happy and grateful for the opportunity.”
Super Featherweight prospect James Wilkins (8-1, 6 KOs) of Staten Island, N.Y. beat Luis May (21-16-1, 8 KOs) via six-round unanimous decision. Wilkins earned two scores of 79-73, while one judge had it 78-74. 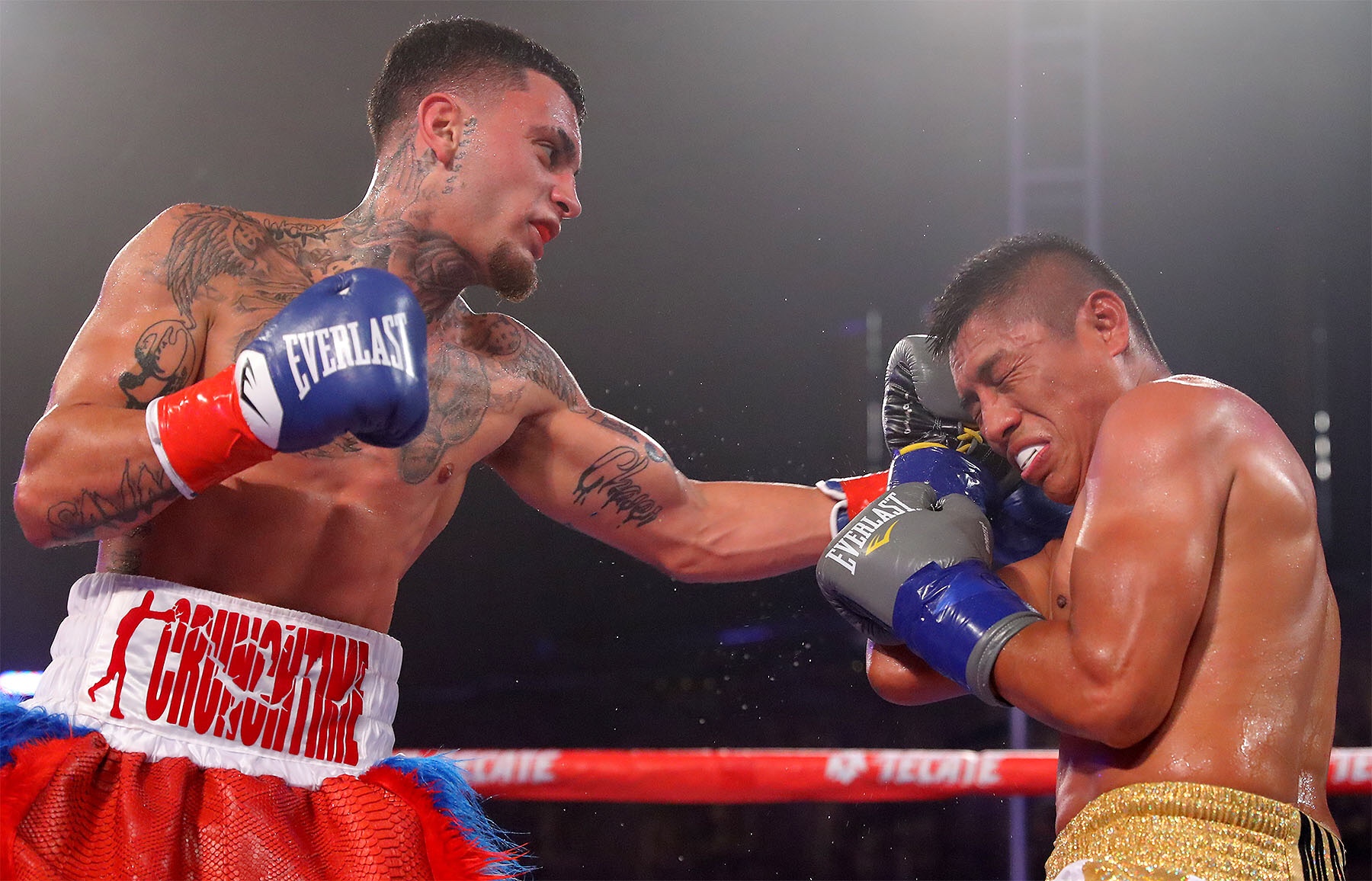 “I’m happy with the win. I boxed, and I boxed smart,” said James Wilkins. “I fought a veteran, and I feel like I did great. What’s next? Whatever Golden Boy wants for me.”
Chris “Milly” Ousley (12-0, 9 KOs) of Chicago scored a six-round unanimous decision win against Even Torres (7-9, 5 KOs) of El Paso, Texas in a super middleweight fight. Ousley won with two scores of 59-55, while one judge scored it 60-54. 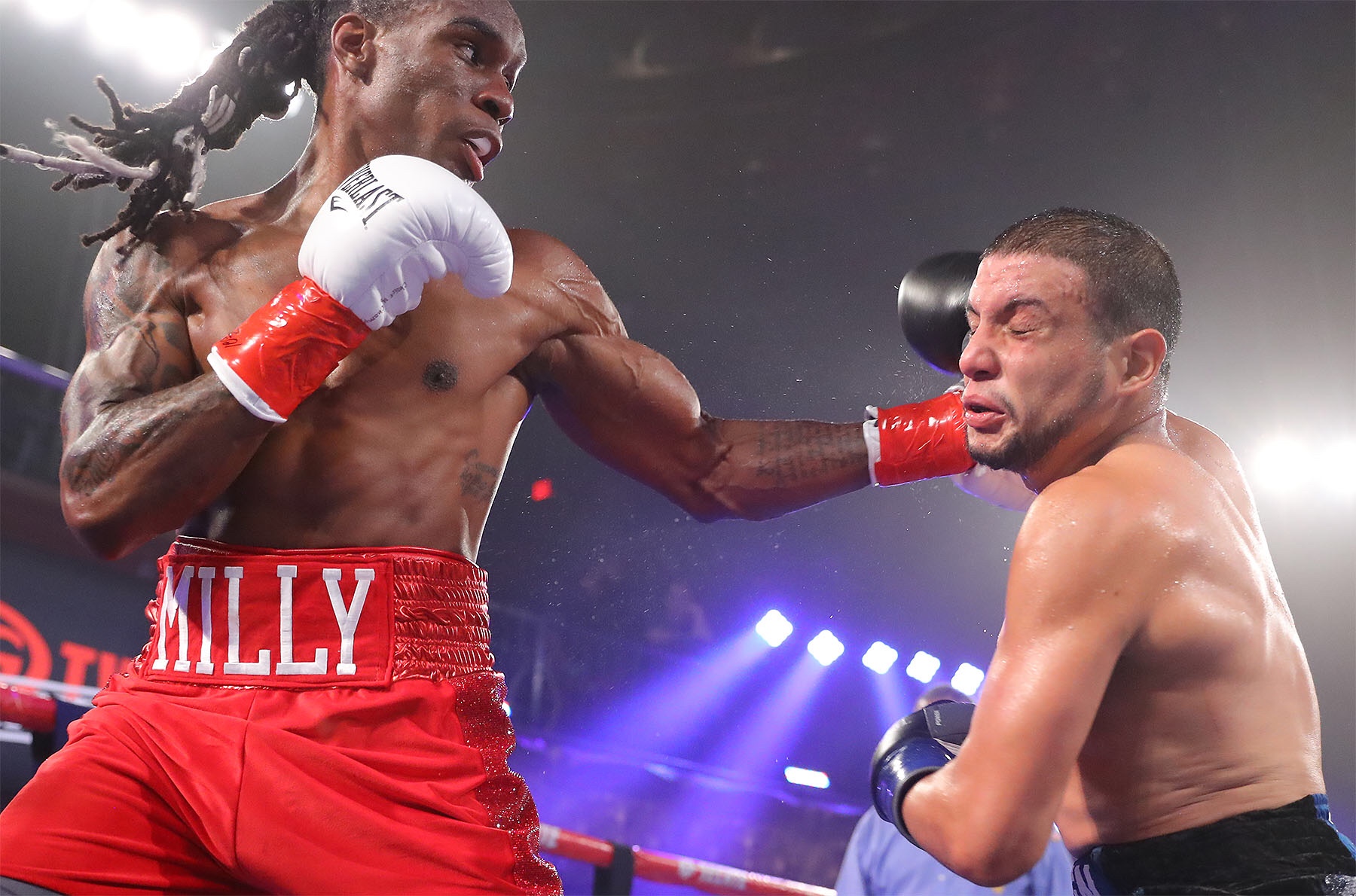 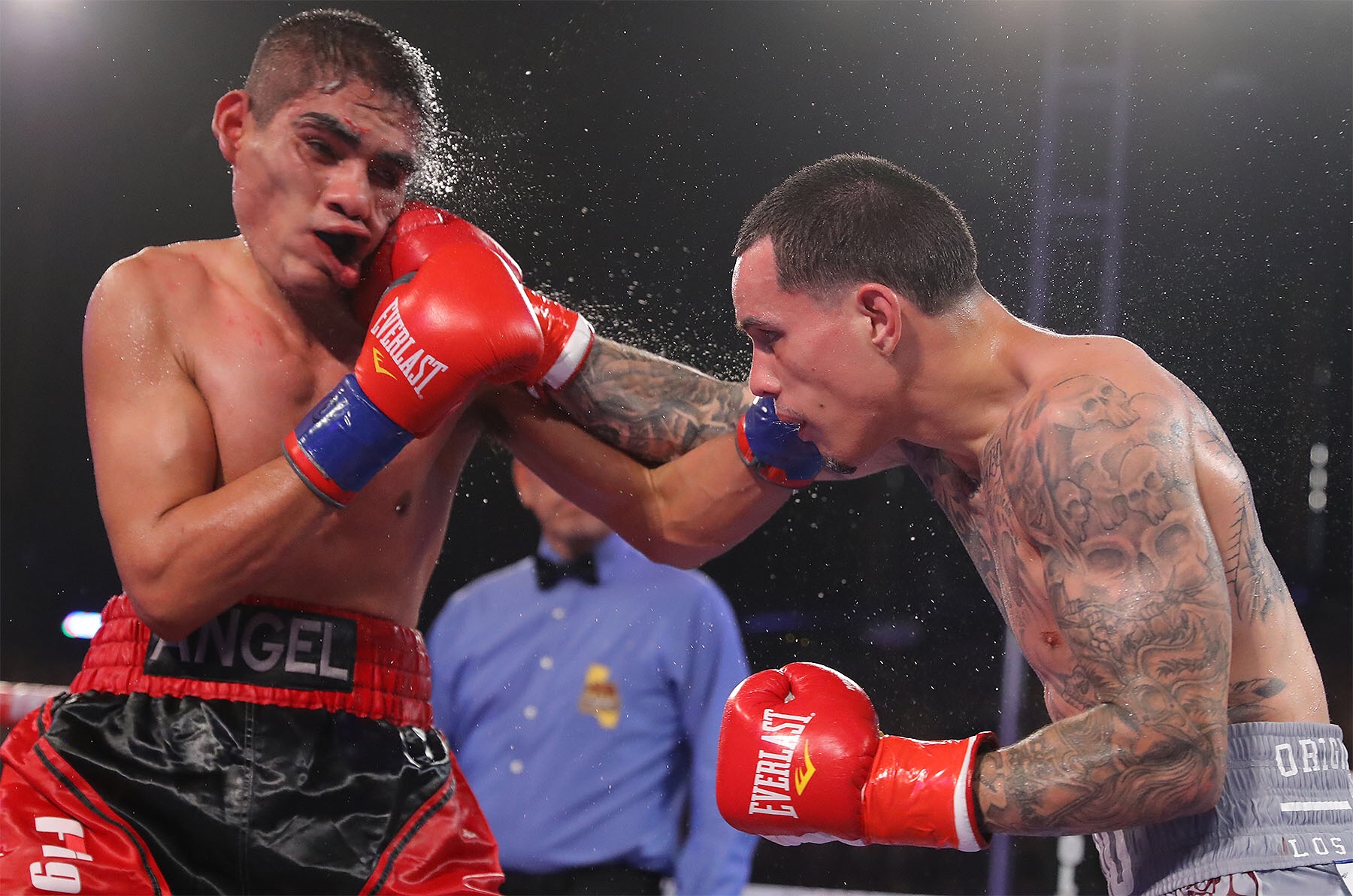 “I was in there with a veteran,” said Herbert Acevedo. “He’s a tough guy, and he’s been in the ring with some great guys. I want to thank Golden Boy for the opportunity.”