FLINT, Mich. (August 14, 2019) – Undisputed middleweight champion Claressa Shields and former world champion Ivana Habazin squared-off and exchanged words at a pair of press conferences in Flint and Detroit on Wednesday, as they previewed their battle for the WBO Junior Middleweight World Championship taking place Saturday, October 5 live on SHOWTIME from Dort Federal Event Center in Flint, Mich.
In the main event of SHOWTIME BOXING: SPECIAL EDITION (9 p.m. ET/ 6 p.m. PT), Shields will aim to make history as the fastest fighter in boxing, male or female, to become a three-division world champion, in her first professional fight in her hometown of Flint.
Wednesday’s press conference in Flint featured Mayor Karen Weaver offering words of encouragement for the city’s hometown hero.
Shields vs. Habazin is promoted by Salita Promotions. Tickets for the live event can be purchased at Ticketmaster.com and at the Dort Center box office.
Here is what the press conference participants had to say Wednesday from the Dort Federal Event Center in Flint and the Hotel St. Regis in Detroit:
CLARESSA SHIELDS
“I’m so happy to be here. This moment is a long time coming. I’ve been a pro for nine fights and all I’ve wanted to do is come back home and fight. I haven’t fought here since the amateurs when I was 18. 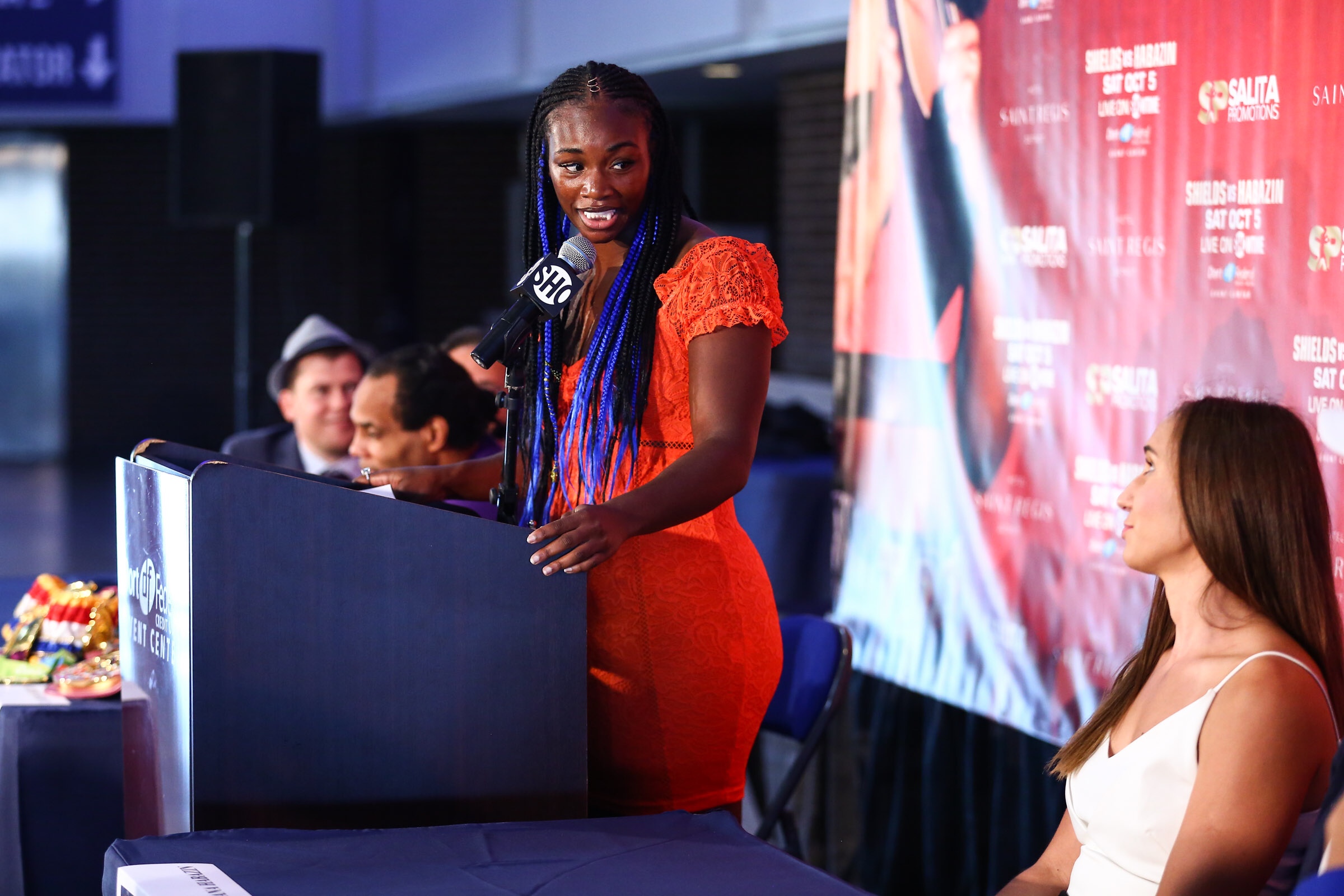 PHOTOS BY: STEPHANIE TRAPP FOR SHOWTIME BOXING
“To be here now as a pro with two Olympic gold medals, all my belts and my whole team here, it just feels really good. Our city has gone through rough times with the water crisis, but I wanted to show that we’re still fighting people.
“A lot of us here are fighting daily. I’m happy that I can be in the ring doing what I’m doing, but outside of the ring I get to inspire kids. Having a summer camp here this summer really changed me. My knee injury gave me more time to spend with the kids, and that time with them made me stronger.
“I understand that Habazin is here and wants to win, but don’t come here like this is going to be a walk in the park. Christina Hammer thought this was a joke, so I hope Habazin is taking this as seriously as possible.
“I love this challenge, but you will not beat me in front of my family and friends. I’m going to destroy her. Don’t miss this, because this is going to be a knockout.
“I’m so excited about this fight. My last fight was supposed to be the toughest fight of my life, and it was probably the easiest pro fight I’ve had so far, and it was against an accomplished long-reigning champion.
“You can’t talk about women’s boxing without thinking of me. This fight is here in Flint, Michigan because of what I’ve done and what I’ve accomplished. I appreciate Ivana for wanting this challenge, but she’s acting crazy talking about knocking me out.
“She’s going to be in defense mode I think. I’ve seen how she fights. If she thinks she’s going to stand there blow for blow with me, she’s crazy. She has good movement and hand speed, but she has a lot of flaws.
“Being at 154-pounds, I’m going to be stronger and I’m going to be faster. I’ve never had a problem making weight and it won’t be a problem at 154.
“I’m looking forward to seeing everyone in Flint for the fight and really embracing the city. Buy tickets because you do not want to miss this fight. I hope she can fight like she can talk so it can be a great one for the fans.”
IVANA HABAZIN
“This is a really big opportunity for me. I was a world champion and I’m looking forward to winning a title in another division. 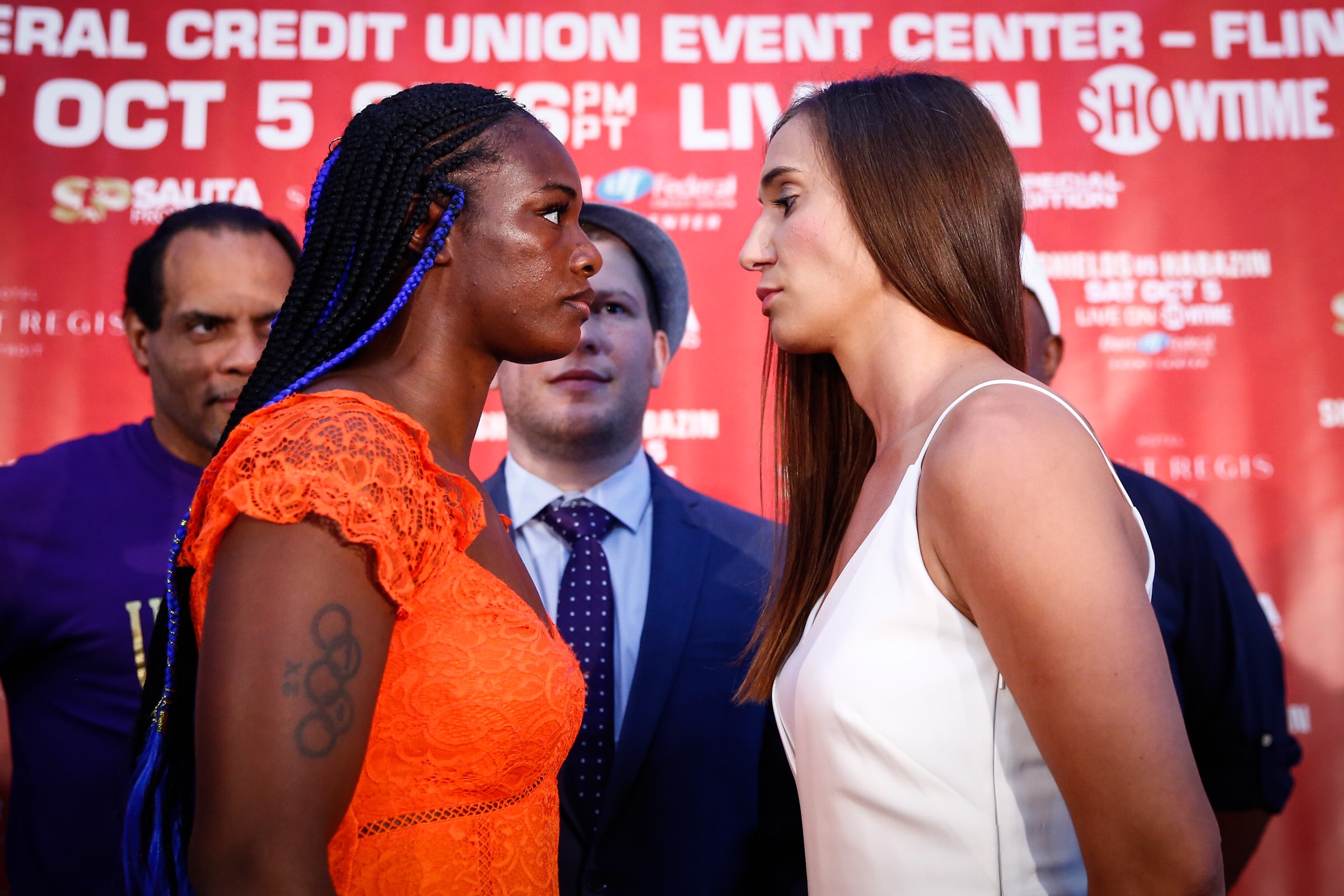 “Claressa Shields is a spectacular fighter and I have respect for her, but I’m going to bring the fight to her. I didn’t come here just to fight; I came here for victory.
“She is taking on a big challenge. If she says she’s going to make the weight, then I believe her. But I know that it’s going to be tough for her because it’s not her natural division. I hope she makes the weight and that we’ll have a good fight. Fighting at 154-pounds is an advantage for me.
“When I decided to fight at middleweight, I started fighting there because I wanted to fight her. She’s the best fighter out there, and I know that I can beat her. When they told me that she wanted to go down in weight, I knew it was the perfect time.
“It doesn’t matter to me if the fight is in Flint, London, New York or anywhere. The ring is my home and what happens in there is the most important thing. I’m always the underdog and I like to be in that position. I won my title in my opponent’s hometown and I’m going to do it again.
“I’m at the point in my career where it could be my last chance to do something big and change my life. This isn’t just a fight for a title, it’s a fight for my life. When you only have one chance and you’re really hungry, anything is possible.
“It’s going to be tough in her hometown to beat her on points, so I’m coming here to knock her out.
“I’m happy to see that she is healthy because she needs to be ready for what I’m going to bring on October 5.”
JOHN DAVID JACKSON, Shields’ Trainer
“It’s great to be here for this event. This should a good fight between two hungry fighters leaving it all in the ring. 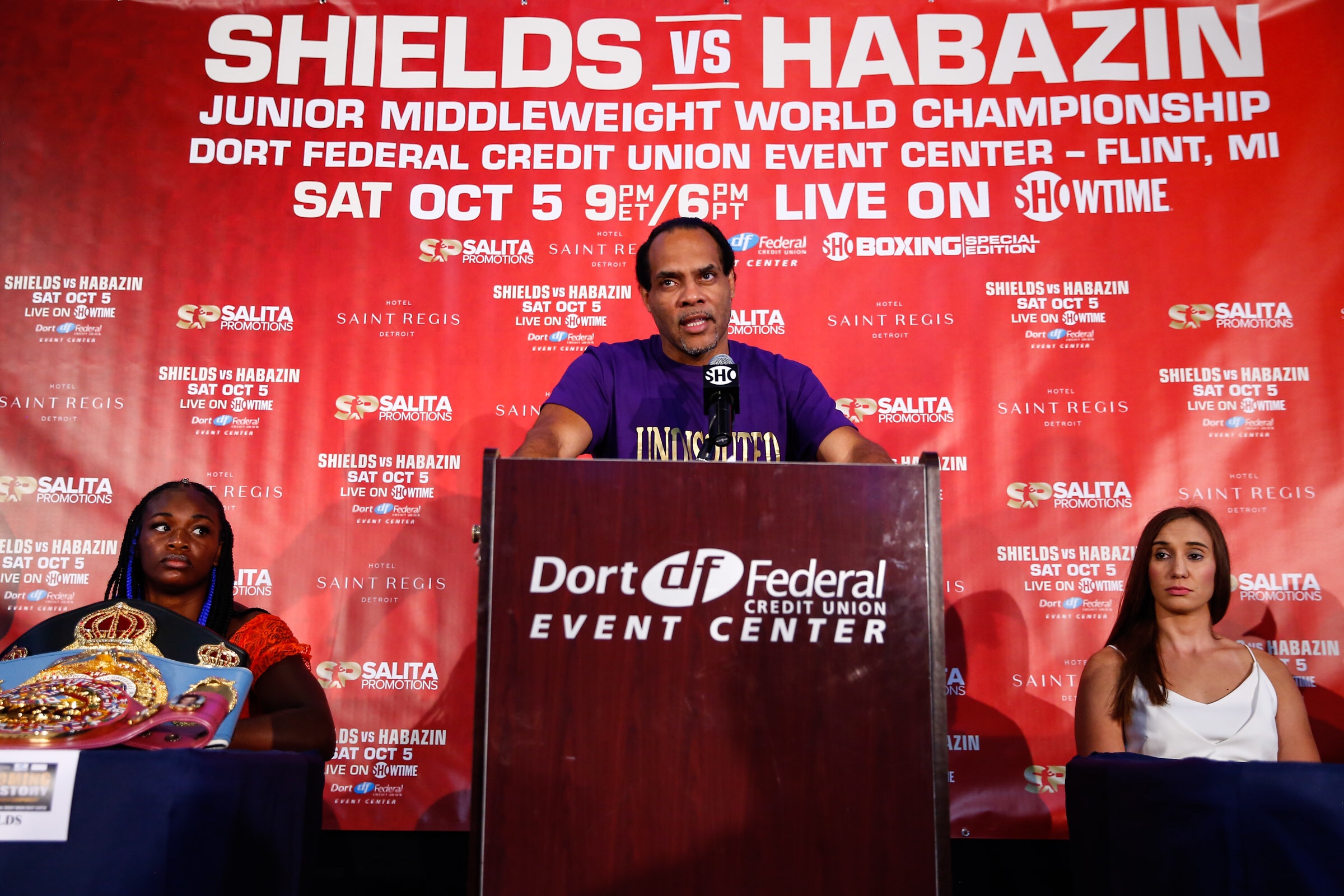 “Habazin has a great trainer in Bashir Ali, so I know that she’s going to be ready for us. Claressa will be ready too, so I just have to make sure everything is set with our game plan.
“Claressa is the biggest star in women’s boxing and we have to be ready for any and all opponents. This is another step towards her becoming the greatest women’s boxer of all time. My job is to make sure she gets there.
“I’m looking forward to a great fight and I can’t wait to see everyone in this arena on fight night. After fight night she’ll be a world champion again, and when the dust settles, she’ll be the best of all time.”
BASHIR ALI, Habazin’s Trainer
“This is a fight with two world champions going after another world title. People take things for granted, and we know that Claressa has accomplished a lot, but there are going to be two strong fighters in the ring. 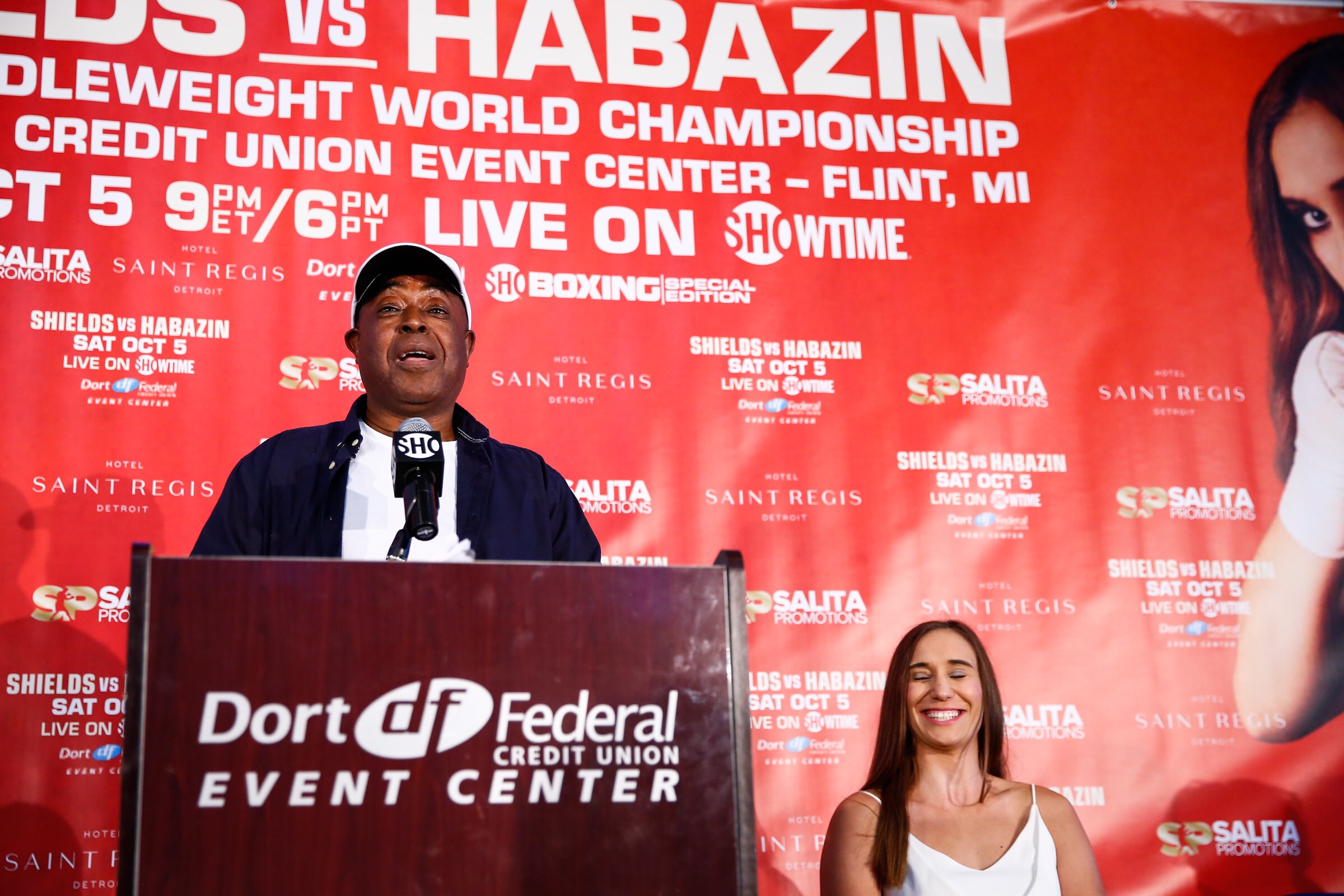 “You can look back and see so many big upsets throughout the history of the sport and it should teach you not to take anything for granted. These are two fighters who are going to give everything they’ve got.
“I’m not just preparing Habazin for a fight, but I’m preparing her for the mindset behind the fight. In this case, my counterpart John David Jackson is a threat. We know we have to work to win this fight.
“I’m not going to rest easy until we win this belt. I tell Habazin every day that we have to put our best foot forward and give it everything we have.”
FLINT MAYOR KAREN WEAVER
“We are so glad that you are here for this great event. I want to thank Claressa for what she is doing. She’s been saying she wants to have a fight at home, and home wants you to have a fight here. 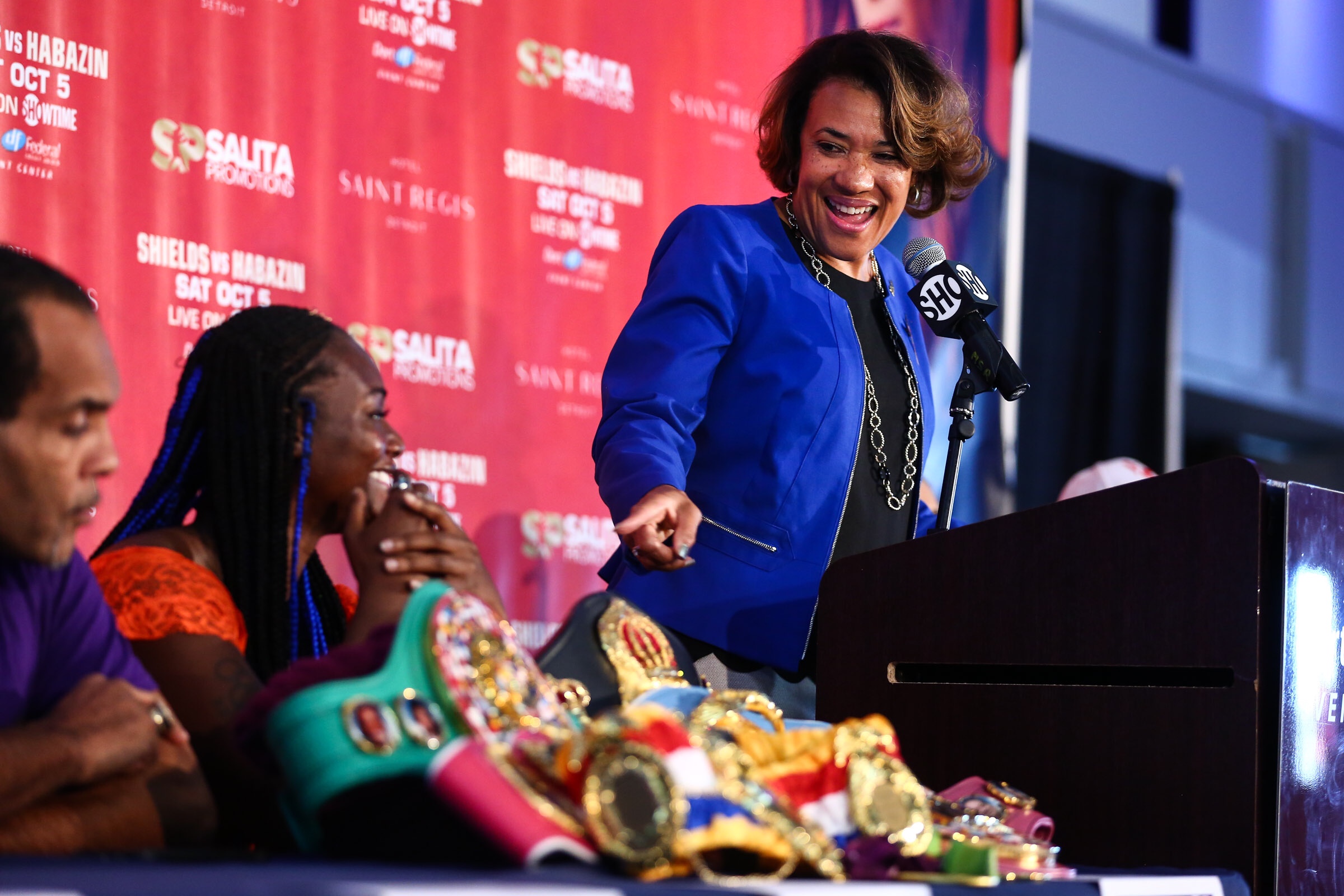 “This is a big deal for Flint. We’re so excited to have Claressa bring this fight to the city of Flint, because it shows people a different side of Flint. It shows people our toughness and our strength and grit.
“It’s so important to us that Claressa comes home and is involved with the community. Every opportunity that she has, she’s gives back to the community and it means a lot to us.
“I just want Claressa to know how happy we are, how proud you continue to make us, and we know it’s not going to stop. We can’t wait for the fight October 5.”
DMITRIY SALITA, President of Salita Promotions
“Claressa Shields will look to make history again when she fights for a junior middleweight title. We had offers from around the country to host this fight, but Claressa was very focused on bringing a big fight back home to Flint. This is going to be a great night for the city. 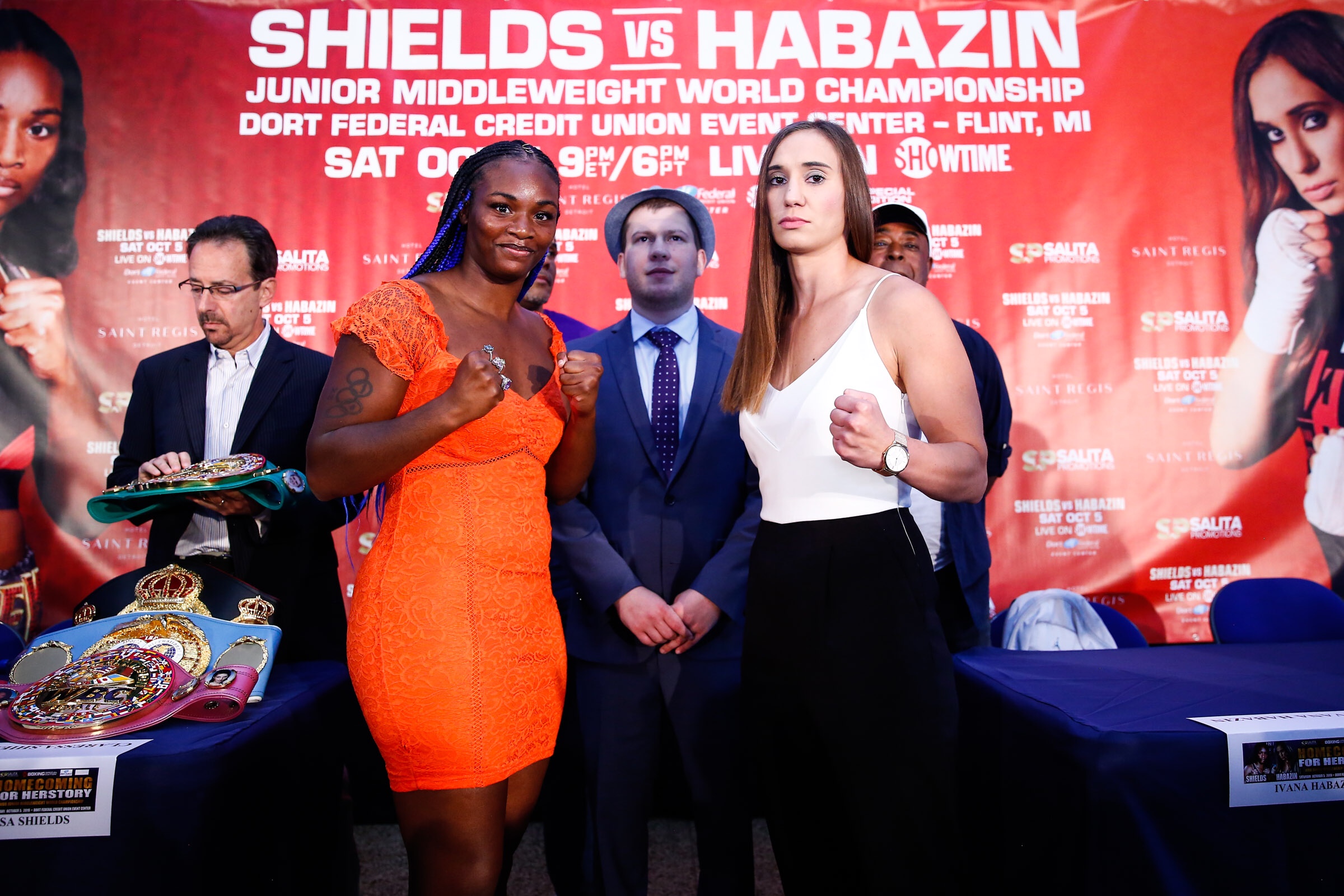 “Claressa Shields has accomplished a lot in her life in boxing and as a humanitarian and role model, but she will be achieving a first on October 5, because it will be her first time fighting as a pro in her hometown of Flint. She has a special relationship with Flint and I know that Flint is going to support her as she looks to make more history in her already remarkable career
“Claressa is going to have a tall task against Ivana Habazin, who not only has won a title, but enters this fight on a five bout winning streak and has been focused on this challenge for a long time.
“I want to thank SHOWTIME for their commitment to Claressa’s career and to women’s boxing as a whole. They’re an important partner on this journey that we’re all on with Claressa, and it’s exciting to have a platform like SHOWTIME for her to display her talents on.
“This has all the makings of a tremendous fight and a night that will be remembered for a long time, so you’re going to want to make sure you buy a ticket, or if you can’t be there watch it live on SHOWTIME.”
MARK TAFFET, CEO of Taffet Media & Shields’ Manager
“We couldn’t be more pleased to be here in Flint. We know that this is going to be a great event and we’re proud to have this fight with Claressa Shields here and we look forward to all the fans in Flint, Michigan coming out. 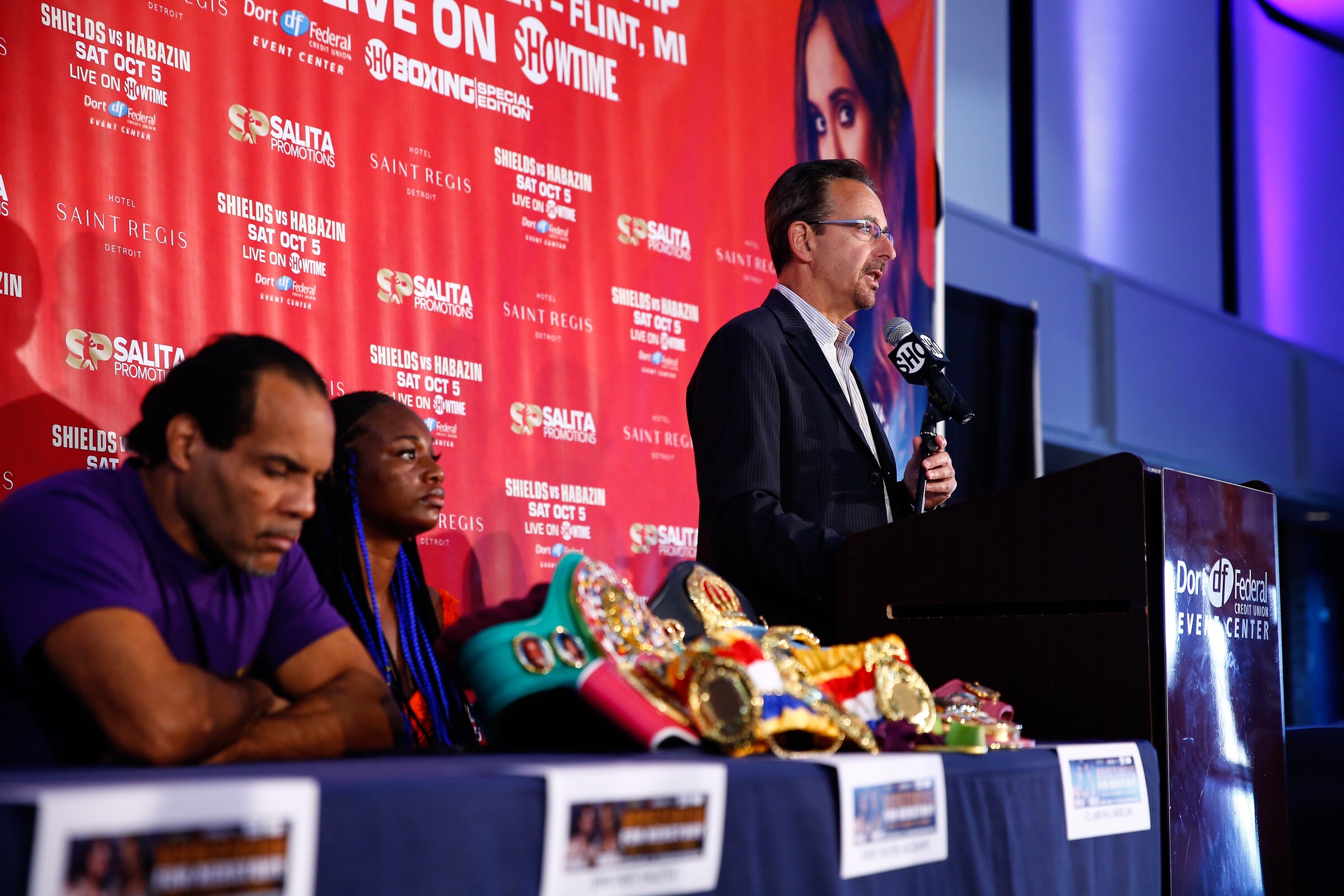 “I’ve worked with many of the biggest and greatest fighters of all time, but I’ve never been more proud of a fighter and more proud to work with a fighter, than I am with Claressa Shields. She isn’t just once in a generation, she’s truly once in a lifetime.
“Before Claressa is done, she won’t just set records, but she will make her mark outside of the ring, like the greatest athletes in history. I believe that she is going to change the game forever.
“Ivana is an accomplished world champion herself, and one of the top fighters in women’s boxing. She’s very proud of her accomplishments in boxing and we couldn’t be more pleased to have a woman of her character as part of this historic fight.”