Houston, TX:          Yesterday at the Fighter Nation Gym in Houston, Texas junior middleweight prospect Evan Holyfield, middle son of Hall of Famer Evander Holyfield, officially announced he has teamed up with Main Events to launch his professional career. Below are quotes from this event: 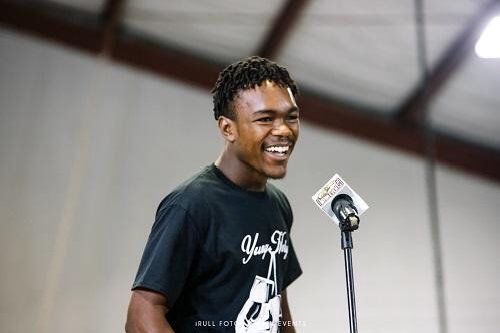 Evan Holyfield:
“I signed with Main Events! First off, I would just like to thank God for allowing me to get to this position. There were times in my life when things didn’t make sense and I always prayed for perseverance. I want to thank Kathy Duva for taking a chance on me. I want to thank my whole team and I want to thank my mom. We have been through a lot and it took a lot to get here. I probably wouldn’t be here without her.” 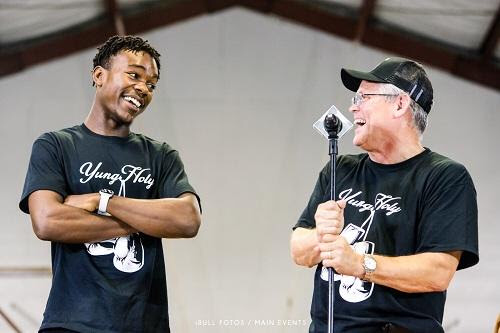 Maurice “Termite” Watkins – Holyfield’s Manager/Trainer:
“About 30 something years ago I got to meet this man named Lou Duva. We got to become friends and he had this fighter. His name was Evander Holyfield. I want to give a big shout out to Evander because I would not be here without him. Toi Irvin, Evan’s mother, thank you for trusting me with your son. We’ve made this decision and we have come a long way in a short time. We have a little way to go until we get where we want to be – and that is that championship of the world!
“When I met Lou Duva, he had Evander Holyfield, Pernell Whitaker, Meldrick Taylor, Mark Breland and he did some great things in the boxing world. But, really, I have to give the credit to Dan Duva. Dan was actually the brains behind things. They have both gone to be with the Lord so it is my pleasure to introduce the woman who is Main Events now, Kathy Duva.” 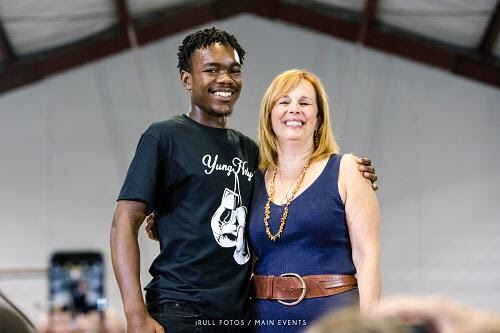 Kathy Duva – CEO of Main Events:
“Thank you, Termite. Almost 35 years my late husband’s company made advances as a young up-start boxing promoter. He made it clear that we had arrived in a very big way when Dan announced that we had signed six boxers from the greatest Olympic boxing team of all time. Most of those fighters went on to achieve greatness as world champions. In the professional ranks, two of those fighters had such spectacular careers that they are now accepted universally among the all-time greatest practitioners of the sweet science. Tragically, we lost one of them last week, Pernell Whitaker. The other, of course, was Evander “The Real Deal” Holyfield.
“His iconic fights with Dwight Muhammad Qawi, Buster Douglas, George Foreman Riddick Bowe, and, of course, Mike Tyson placed him among the all-time heavyweight greats. His historic career is now the stuff of legends. Back then Main Events was blessed to have the opportunity to launch Evander’s career and guide his assent. As he became the undisputed cruiserweight champion in just his 12th fight and then, as if to defy the many pundits that that pronounced him as too small, Evander patiently explained that it isn’t the size of the man but the size of his heart that matters. He landed a right hand to knockout Buster Douglas and become the undisputed heavyweight world champion.
“Back in 1984, my job at Main Events was publicist. So, obviously I could go on with great pride to speak about Evander’s many accomplishments but that is not why you asked me all to be here today. We have something very different in mind, as Termite and Evan have already told you. I used to laugh because when Dan would joke with Evander whenever he congratulated him on the birth of another son, that Dan was going to ask for dibs on signing him someday. I never imagined in my wildest dreams it would actually happen. But I am delighted and amazed to tell you that it did.
“People have asked me what made me decide to sign Evan. I have to say that when I met him just a few weeks ago that three things jumped out at me. We very rarely sign pro debut fighters at Main Events, and I have never signed a big-time fighter’s son. But he truly is a super athlete. He already has what we call ring intelligence. He is a student of the game and he is analytical in his approach to his chosen profession. Finally, he has a passion to succeed. That became crystal clear to me as I read the book this talented young man wrote when he was still a teenager. That’s right. He wrote a book! Talk about a work ethic! When I was teenager all I could do was get my term papers turned in on time. 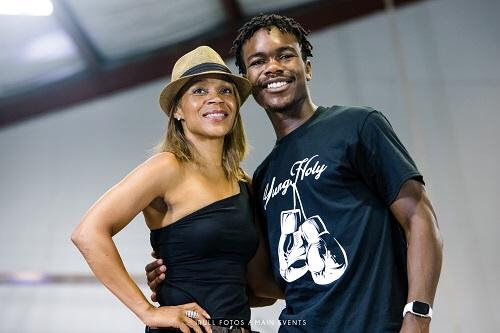 “I met his mom, Toi Irvin, for the first time yesterday. All I could say is Toi you have raised an impressive young man. I am thrilled at the prospect of promoting his career. Particularly, because I am able to announce it here in this very ring that once graced Kenny Weldon’s gym. This ring hosted some of the greatest fighters of all time. Muhammad Ali fought in this ring and Evan’s dad trained in this ring. I think you can almost taste the history of the ring right now.
“It is with great pride and anticipation that I am here to tell you how thrilled we are at Main Events, my whole staff, that we are going to play a role in this young man’s career. I am one of the only people in this room who is old enough to remember watching Termite Watkins when he was in the amateurs. I became very familiar with his colorful background when he coached the Iraqi amateur boxing team. Then he called me out of the blue one day and asked me if Main Events would be interested in signing one of his young recruits. I wasn’t able to help him then but I am glad I am glad I was able to say yes when he called this time. I look forward to getting to know Termite and the rest of his team much better in the coming months and years. From what I can see, I can tell this is going to be a really fun ride!” 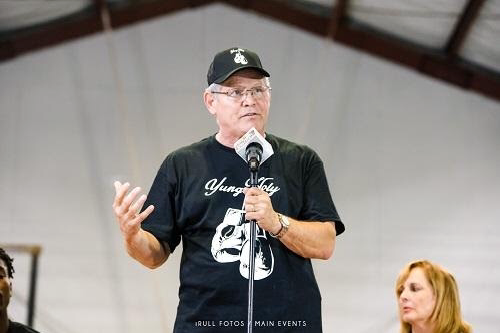 Termite:
“I am just honored and thrilled that this guy from North Shore is over here doing business with Kathy Duva. When I wanted to put this team together, I wanted to make sure it was complete. Really and truly though I can’t take the credit. It was a God thing. It was God that brought this team together. When we were just coming together, I called a guy named Tim Hallmark. I was so honored that he would even take my call. I knew him because he was the one that took Evander Holyfield and made him big and strong. We here at Fighter Nation we want to have the best equipment. My friendship with Tim just grew and flourished. In my opinion, Tim Hallmark, is one of the greatest strength and conditioning coaches in history. 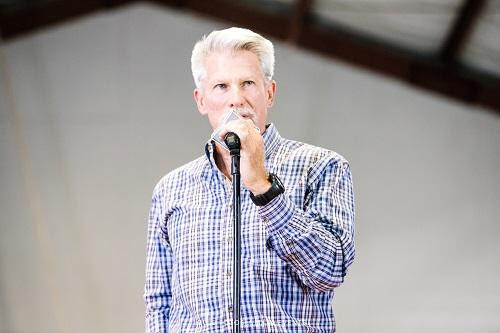 Tim Hallmark – Evan’s Sports Performance Coach:
“First off, I am just so blessed to be here. The Word of God says, ‘This is the day the Lord has made. Let us rejoice and be glad.’ And that is just the truth. I have been a sports performance coach for 40 years. I have worked with just about every sport out there. Some of the greatest people I have been blessed to meet are in boxing. Hands down.
“I don’t know how many of y’all actually knew Kenny Weldon. If Kenny didn’t like you, you knew it. If Kenny liked you, you knew it. For whatever reason he liked me. I came for Kenny’s funeral and Termite and I reconnected. I came over here to Fighter Nation to see what was going on and if you have ever seen it, it’s like going to church in a gym and a dance hall all at the same time. It is crazy awesome. While I was there someone came in the door and they needed some help. Termite stopped the workout. Everybody came over and everybody prayed for that person. Every time I have been back here that’s what I see. That is what goes on here five and six nights a week. This ground is part of God’s plan. Just to say I am a little part of Fighter Nation makes me very proud.
“Evander and I had been talking about Evan turning pro. I said to him and I said to Toi that you need to go and see Termite at Fighter Nation. Evan came down to see if it was a good fit. He took Evan into his home and showed him the way we do things. I have been very blessed because between Toi and Evander I get the inside scoop about this young man. Toi would call me and tell me things about Evan that only a mama would know. These things would give me an advantage. I have been working with Evan for about 14 months.
“I have worked with a lot of athletes in a lot of sports and this guy is really unique. He has a variety of assets that are crazy. Evan could have been successful in whatever he wanted to do. This is what he chose to do. He is super smart because he is a great listener. He doesn’t say a lot but then he will say something to let you know he was tuned in. I have the greatest expectations about what this man is going to do and I am thankful to be part of it.”