INDIO, CALIF. (July 18, 2019): Tureano Johnson (22-2-1, 14 KOs) of Nassau,
Bahamas scored a ninth-round stoppage victory against Irish contender Jason Quigley
(16-1, 12 KOs) in the 10-round main event of the July 18 edition of the Golden Boy DAZN Thursday Night Fights at Fantasy Springs Resort Casino in Indio, Calif. The fight was stopped after Quigley’s corner advised the referee to call a halt to the fight after the ninth round. 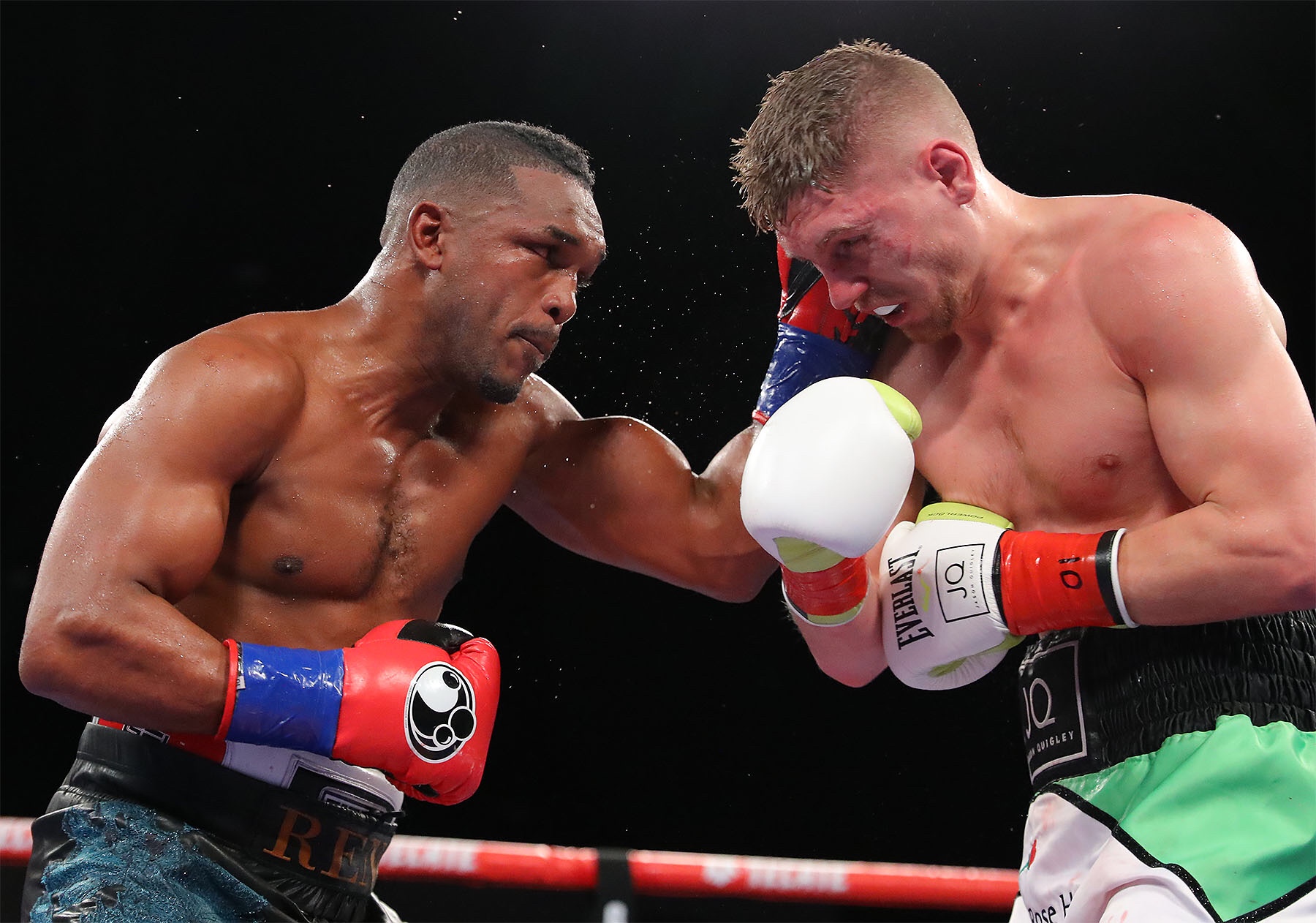 PHOTOS BY: TOM HOGAN FOR GOLDEN BOY PROMOTIONS
“You don’t know what I’ve been through,” said Tureano Johnson. “But soon you’ll see why everything I went through was worth it. I pay my respects to Jason Quigley. He showed a lot of heart. I hit him with everything but the kitchen sink, and he still didn’t quit. I’m here to get a big strap. I want a world title.”
“I wish Tureano Johnson the best,” said Jason Quigley. “I have respect for you. I congratulate you on your win.”
Leonardo Baez (16-2, 9 KOs) of Mexicali, Mexico captured the NABA Super Bantamweight Title with a 10-round unanimous decision victory against Alberto “Impacto” Melian (5-1, 3 KOs) of Buenos Aires, Argentina. Baez won with three scores of 97-93. 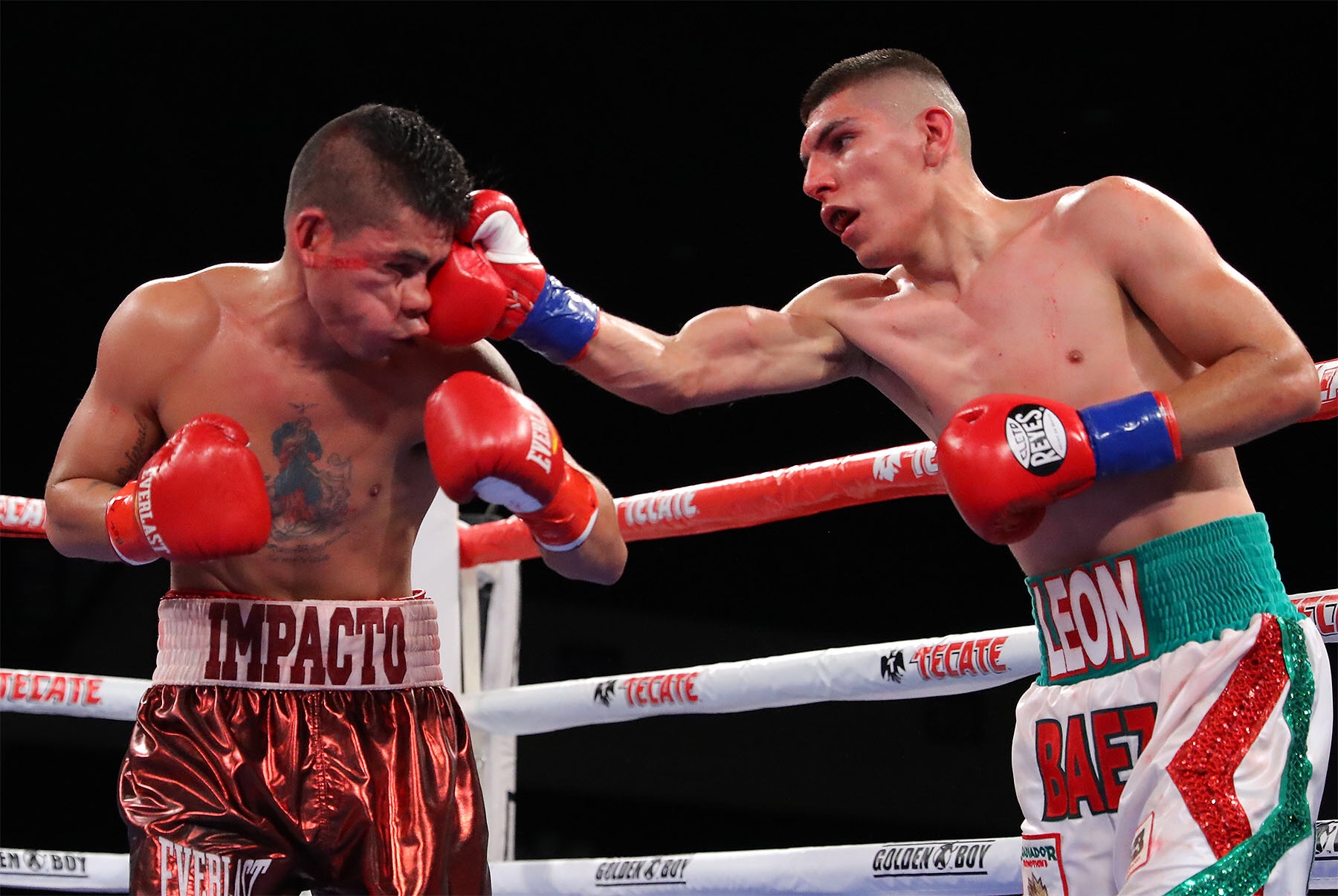 “I feel excellent. This is my first time fighting in the United States,” said Leonardo Baez. “I want to thank Golden Boy for the opportunity. I won because of my heart. I threw the harder punches. I’ll be honest, I lost the last round, but I won this fight because of my heart.”
Marlen Esparza (7-0, 1 KO) of Houston, Texas successfully defended her NABO Flyweight Title via eight-round unanimous decision against Sonia Osorio (13-7-1, 3 KOs) of Mexico City, Mexico. The judges scored the fight 78-74, 79-73 and 79-73. 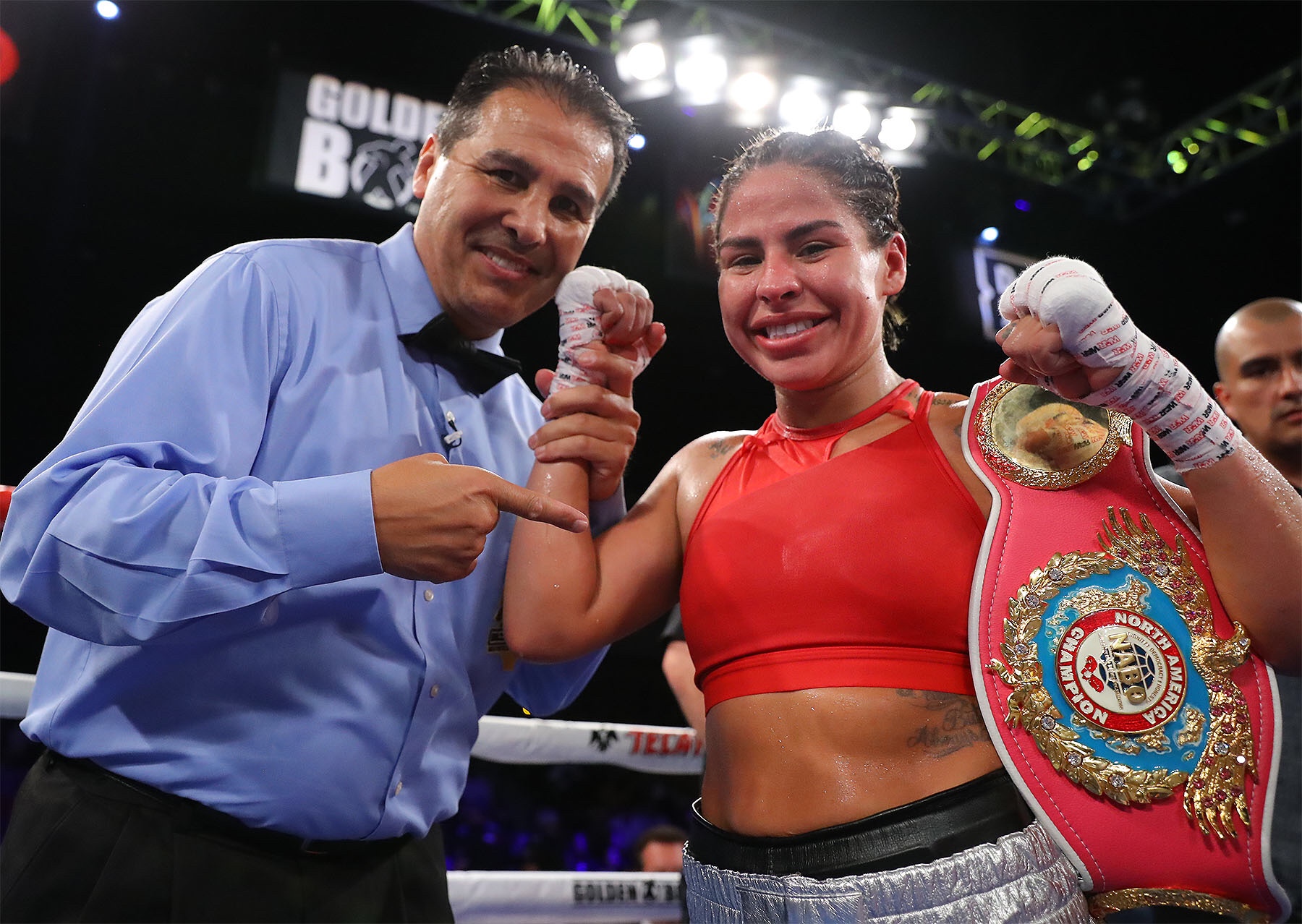 “I think I did okay,” said Marlen Esparza. “I’m always so hard on myself, though. She kept putting her head on my chest, which I didn’t like. The referee never stopped her, which makes me think he was letting us fight. That’s good, but I also figured I had to take matters into my own hands. So, I found my timing and started landing the counter right hand. I want to beat Seniesa Estrada’s ass first, and then I want to fight for a world title.”
Local hero Anthony “The Quiet Storm” Reyes (7-0, 5 KOs) of Coachella, Calif. scored a first-round knockout victory against Gilberto Duran (3-4, 3 KOs) of Yakima, Wash. in a scheduled six-round super bantamweight fight. Reyes stopped a bloody Duran at 2:10 of the round just mentioned.
“I like that I came out smart and strong,” said Anthony Reyes. “I worked hard to be able to go the distance and fight all six rounds. But we got the knockout, which is even better.”
Ricardo “El Niño” Sandoval (16-1, 11 KOs) of Rialto, Calif.defended his WBC Youth Intercontinental Flyweight title via fifth-round knockout against Marco Sustaita (12-1-1, 10 KOs) of Oceanside, Calif. The battle, which was originally scheduled for 10 rounds, was stopped at 1:16 of the fifth round. Both men exchanged two knockdowns before Sustaita was stopped. 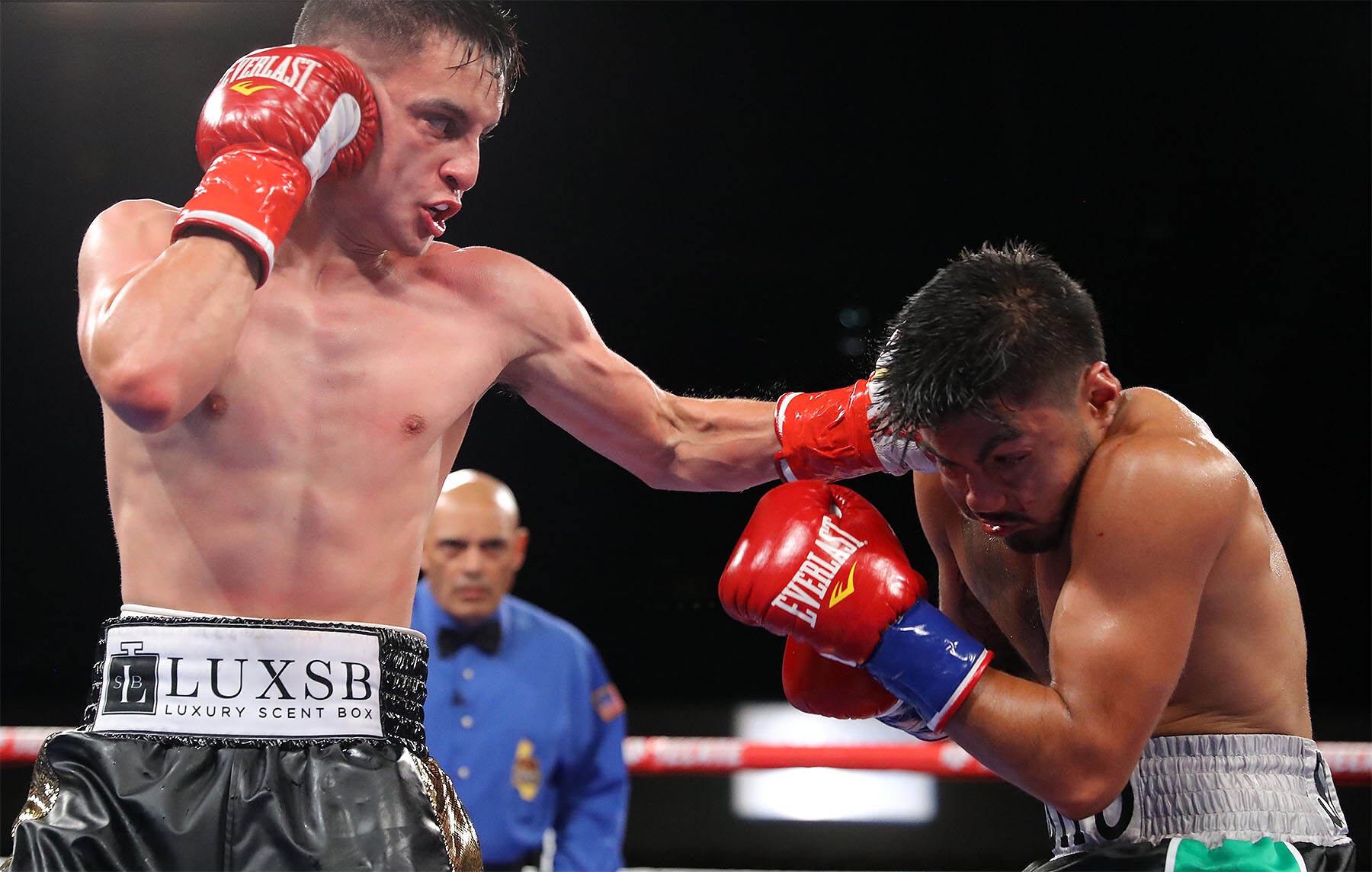 “I faced a good opponent,” said Ricardo Sandoval. “We knew he was strong, so our plan was to box and take our time. Little by little we found our rhythm. Hopefully, Golden Boy can give me another opportunity.”
Carlos “The Solution” Morales (19-4-3, 7 KOs) of Los Angeles scored a second-round knockout victory against Rosekie Cristobal (15-5, 11 KOs) of Cotabato, Philippines in a scheduled 10-round lightweight clash. The time of the stoppage was 1:08. 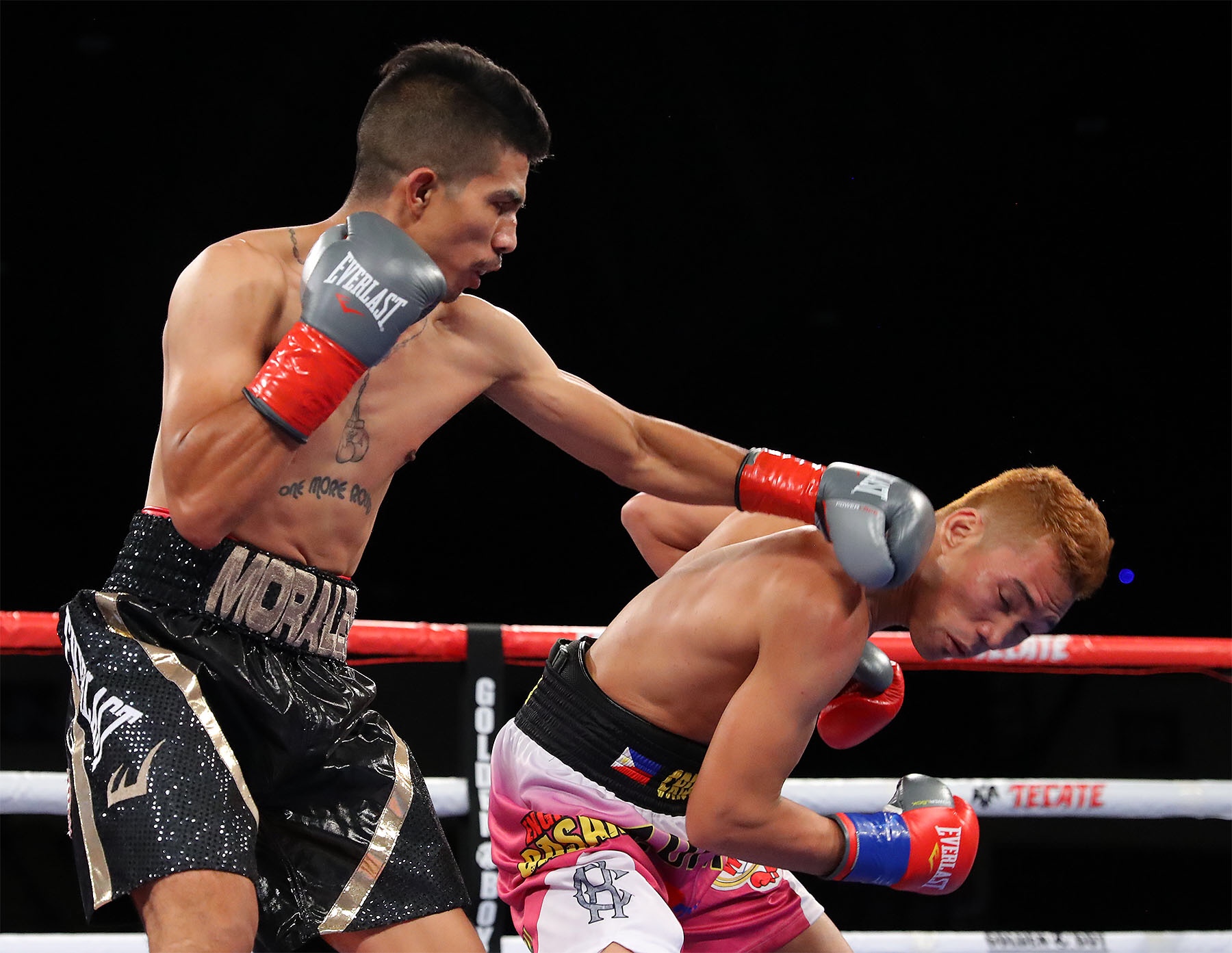 “The great Morales is back,” said Carlos Morales.“I’ve moved up to lightweight, and I plan to stay there. I want to get into the top ten of the world and fight for at title.”
Charles Huerta (21-6, 12 KOs) of Paramount, Calif. defeated Filipino fighter Recky “The Terror” Dulay (11-6, 8 KOs) via eight-round unanimous decision in tonight’s opening bout, which was in the lightweight division. Huerta won with scores of 78-74, 78-74, and 77-75. 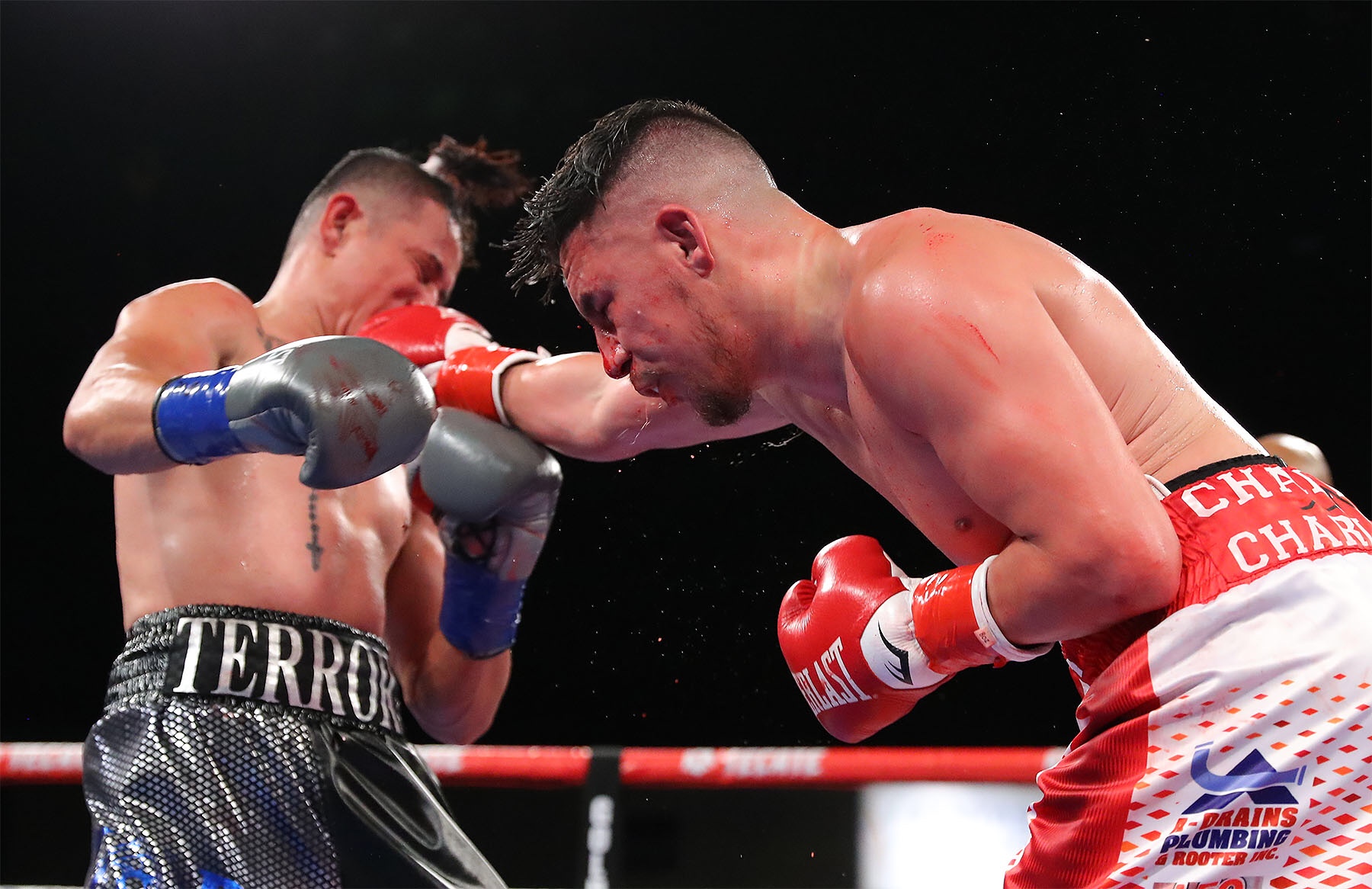 “I give my performance a C,” said Charles Huerta. “I think I could have hit the body more. His trying to land headbutts played a big factor though, and he didn’t get warned until he actually headbutted me. We’ll see what’s next for me. I’m going to get back in the gym soon, and hopefully I get one more fight before the year ends.”