DAZN TO BROADCAST WHYTE VS RIVAS AROUND THE WORLD

The Heavyweight title eliminator between Dillian Whyte and Oscar Rivas for the number one spot in the WBC will be streamed live in all DAZNmarkets on Saturday, July 20, from The O2 in London. DAZN is available across four continents with the service available in the United States, Canada, Germany, Austria, Switzerland, Italy, Spain, Japan and Brazil.

Whyte (25-1 18 KOs) holds the number one slot with the WBC and puts that on the line as the hard-hitting ‘Body Snatcher’ continues to blast his path to a World title shot. The Brixton banger put Derek Chisora away in devastating style in his last outing, the pair thrilling the Greenwich crowd in their rematch in December – before icing Del Boy in the 11th round. 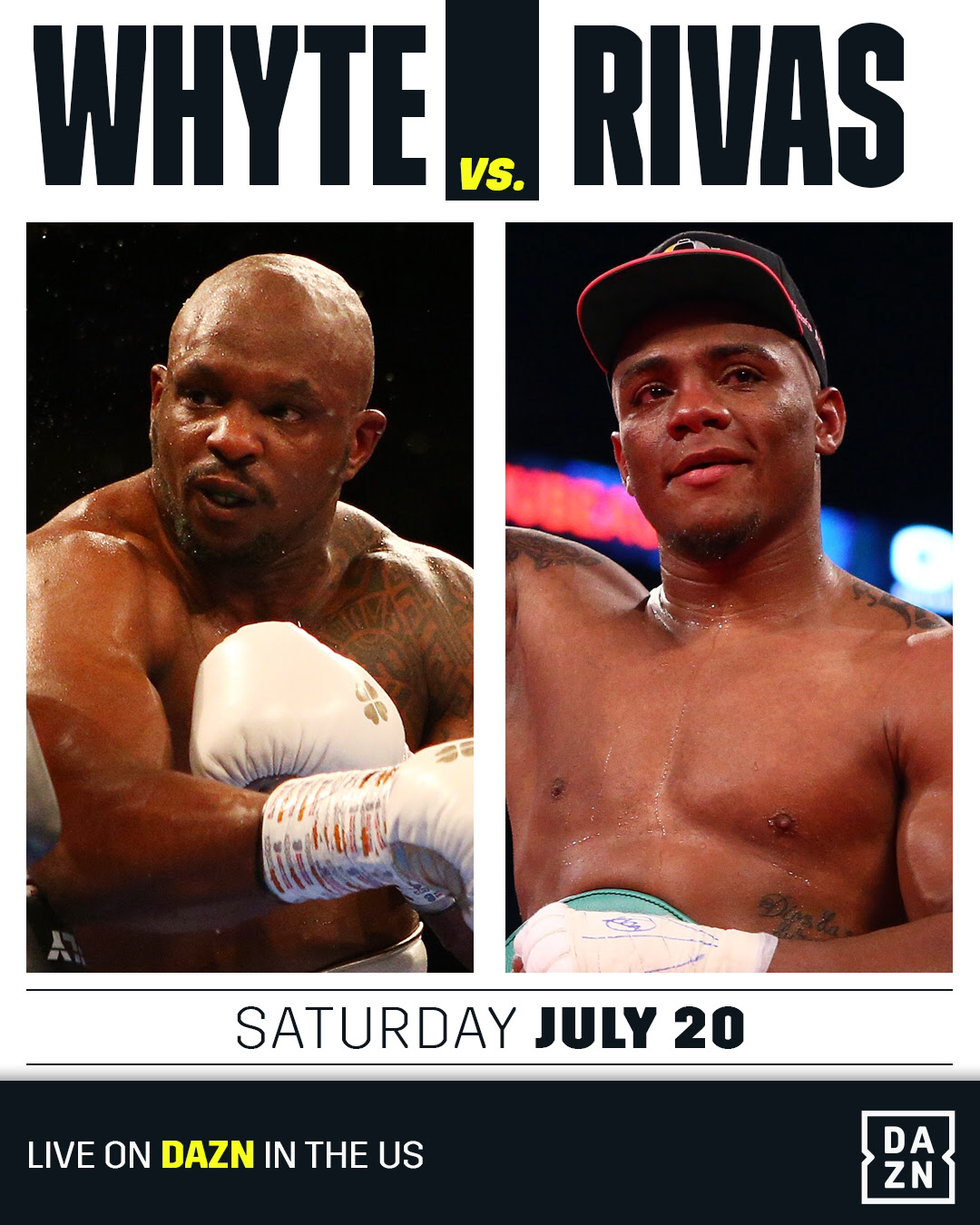 The 31-year-old Briton will be gunning for a tenth straight win against Rivas, with wins over Joseph Parker, Robert Helenius and Lucas Browne sandwiched between his two wins over Chisora. Whyte has become a must-watch fighter since rocking old foe Anthony Joshua in their battle at The O2 in December 2012, and yet again takes on a high-risk challenge as he cements his spot as the leading Heavyweight contender in the world.

Rivas (26-0 18 KOs) is yet another dangerous challenger for Whyte to risk his number one rankings with, and the Colombian comes into the bout on the back of his biggest win in the paid ranks. Rivas traveled to Turning Stone Resort Casino in Verona, New York in January and KO’d former World title challenger Bryant Jennings in the final round of their clash, underlining his dangerous potential to World titlists and fellow contenders.

In the United States, action will begin on DAZN at 1:00 p.m. ET with the full six-fight Matchroom Boxing undercard from The O2 in London.

Promoter Eddie Hearn said: “This is a huge night of Heavyweight boxing and I’m excited that DAZN subscribers will get to watch it live. Dillian Whyte, who has proved himself as one on the best Heavyweights on the planet, takes on the relentless and unbeaten Oscar Rivas who is coming off a brutal KO of Bryant Jennings. Brit Derek Chisora faces off against Poland’s Artur Szpilka and crowd favourite Dave Allen tackles David Price in a big domestic shootout. Tune in and don’t miss it!”