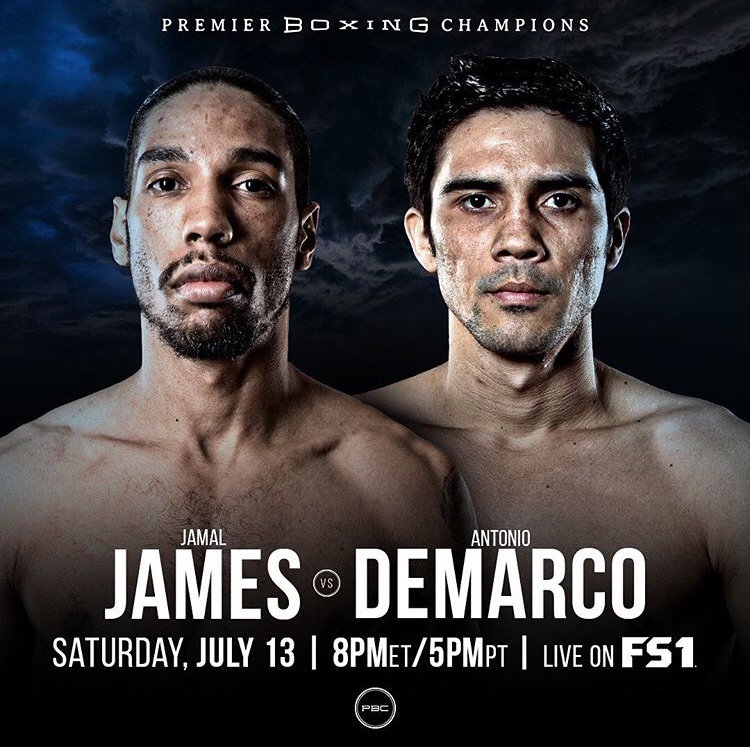 Televised coverage begins at 8 p.m. ET/5 p.m. PT and will also feature a 10-round heavyweight clash between Robert “The Nordic Nightmare” Helenius and Gerald “El Gallo Negro” Washington, plus unbeaten prospect and 2016 U.S. Olympian Karlos Balderas will square-off against Joshuah Hernández in an eight-round lightweight bout.
James takes on the experienced and durable former champion DeMarco in his fourth-straight appearance at The Armory in his hometown. He will look to cement his status in the PBC within the most talent-rich division in boxing.
Tickets for the event, which is promoted by Warriors Boxing and TGB Promotions, are on sale now and can be purchased at the Armory at http://ArmoryMN.com/ and through Ticketmaster.
“One of the staples of boxing at The Armory, Jamal James is ready to make another statement in the welterweight division against the very tough former champion Antonio DeMarco,” said Tom Brown, President of TGB Promotions. “His fourth straight fight at The Armory will give James a chance to thrill his hometown fans once again, as PBC presents another night of action for the fans in Minnesota. With these two fighters’ styles, plus a loaded undercard of exciting fights, this should make for a great night at the venue and live on FS1.”
James (25-1, 12 KOs) has become a local favorite and most recently thrilled the Armory crowd in February with a stoppage victory over Janer Gonzalez on FS1. The 30-year-old has rolled off five consecutive victories since suffering the first loss of his career – a unanimous decision loss to Yordenis Ugás in 2016. James has compiled three knockouts in his current win streak while defeating the likes of Diego Chaves, Abel Ramos and Jo Jo Dan.
“I love being able to fight at home at The Armory, especially against a fighter like Antonio DeMarco,” said James. “DeMarco has the skills and it is going to be a good step up and test for me. We have been chasing this title for the past year. Getting past DeMarco is the way to get there and that’s what I am going to do.
“Minnesota fans are a different type of fans. They come out and show support. Having a place like the Armory to fight is a dream come true. There isn’t a bad seat when it comes to fights. We sell the place out in the winter, and now getting to fight in July, I know it is definitely going to be jam-packed.”
A former lightweight world champion, DeMarco (33-7-1, 24 KOs) owns victories over Jorge Linares and John Molina Jr. in a career that has seen him face a cavalcade of champions and top contenders. Representing Los Mochis, Sinaloa, Mexico, DeMarco has gone the distance in every fight except against multiple-division champions Adrien Broner and Edwin Valero, and in 2017 he knocked out then-unbeaten Eddie Ramirez on FOX in the first round. Last October he went the distance and lost a close decision to unbeaten Maxim Dadashev.
“Here I come again!” said DeMarco. “I am going to win this fight and upset Jamal James in his hometown. I have the experience to get the victory and I’m going to use it to make this a great fight on July 13.”
Currently riding a three-fight winning streak, Helenius (28-2, 17 KOs) will make his U.S. debut on July 13 after establishing himself as one of Europe’s top heavyweights for several years. Born in Sweden and fighting out of Mariehamn, Finland, Helenius knocked out Erkan Teper in September to earn his place in the IBF rankings. The 35-year-old has won six of his last seven fights.
Washington (19-3-1, 12 KOs) is a 6-foot-6 heavyweight who was a former college football standout at the University of Southern California and a U.S. Navy veteran. Fighting out of Vallejo, California, Washington challenged heavyweight champion Deontay Wilder in 2017 on FOX. He scored a unanimous decision victory over John Wesley Nofire in 2018 on FS1 before losing to Adam Kownacki on FOX in January.
Balderas (8-0, 7 KOs) knocked out Luis May in April on FS1 as he continues to progress up the lightweight ladder. The 23-year-old from Santa Maria, California, was a member of the 2016 U.S. Olympic boxing team and scored three stoppage victories in 2018. He will be opposed by the 23-year-old Hernandez (9-2, 7 KOs), who most recently defeated previously unbeaten Desmond Lyons in May. The Chicago-native bounced back from a loss to unbeaten Chris Colbert in January on FS1.
#          #          #
Viewers can live stream the PBC shows on the FOX Sports and FOX NOW apps or at FOXSports.com. In addition, all programs are available on FOX Sports on SiriusXM channel 83 on satellite radios and on the SiriusXM app.
For more information: visit www.premierboxingchampions.com, http://www.foxsports.com/presspass/homepageand www.foxdeportes.com, follow on Twitter @PremierBoxing, @PBConFOX, @FOXSports, @FOXDeportes, @WarriorsBoxingProm, @TGBPromotions, and @Swanson_Comm or become a fan on Facebook at www.Facebook.com/PremierBoxingChampions, www.facebook.com/foxsports & www.facebook.com/foxdeportes.