LAS VEGAS (June 23, 2019) – Former super welterweight world champion Jermell Charlo had anticipated this night would be all about him returning to championship glory. But it wasn’t to be. Charlo accomplished something just as sweet – a picture perfect knockout victory over dangerous veteran Jorge Cota in the main event of PBC on FOX Fight Night from Mandalay Bay Event Center in Las Vegas.
Like a home run hitter sitting on a 3-2 fastball, Charlo (32-1, 16 KOs) delivered a devastating one-two that came right down the middle, crashing flush into Cota’s face and sending him spiraling down and flat on his back on the apron of the ring. The end came at 2:17 of third round as referee Jay Nady stood over the prone Cota (28-4, 25 KOs) and waved the fight off without picking up a count.
Click HERE to see a highlight of the knockout.
Charlo’s victory sets up a rematch with WBC Super Welterweight World Champion Tony Harrison, who scored a unanimous decision over Charlo to take away his title on Dec. 22, 2018. Harrison, who pulled out of Sunday night’s fight with an injured right ankle, was sitting ringside for the fight. Cota of Sinaloa, Mexico stepped in to replace Harrison on three weeks notice.
“I’d like to thank you Cota. He stepped in the ring. The guy who proclaims he has the title didn’t show up,” Charlo said. “I got that knock out right in front of my family. He was just getting started and I landed the clean shot. 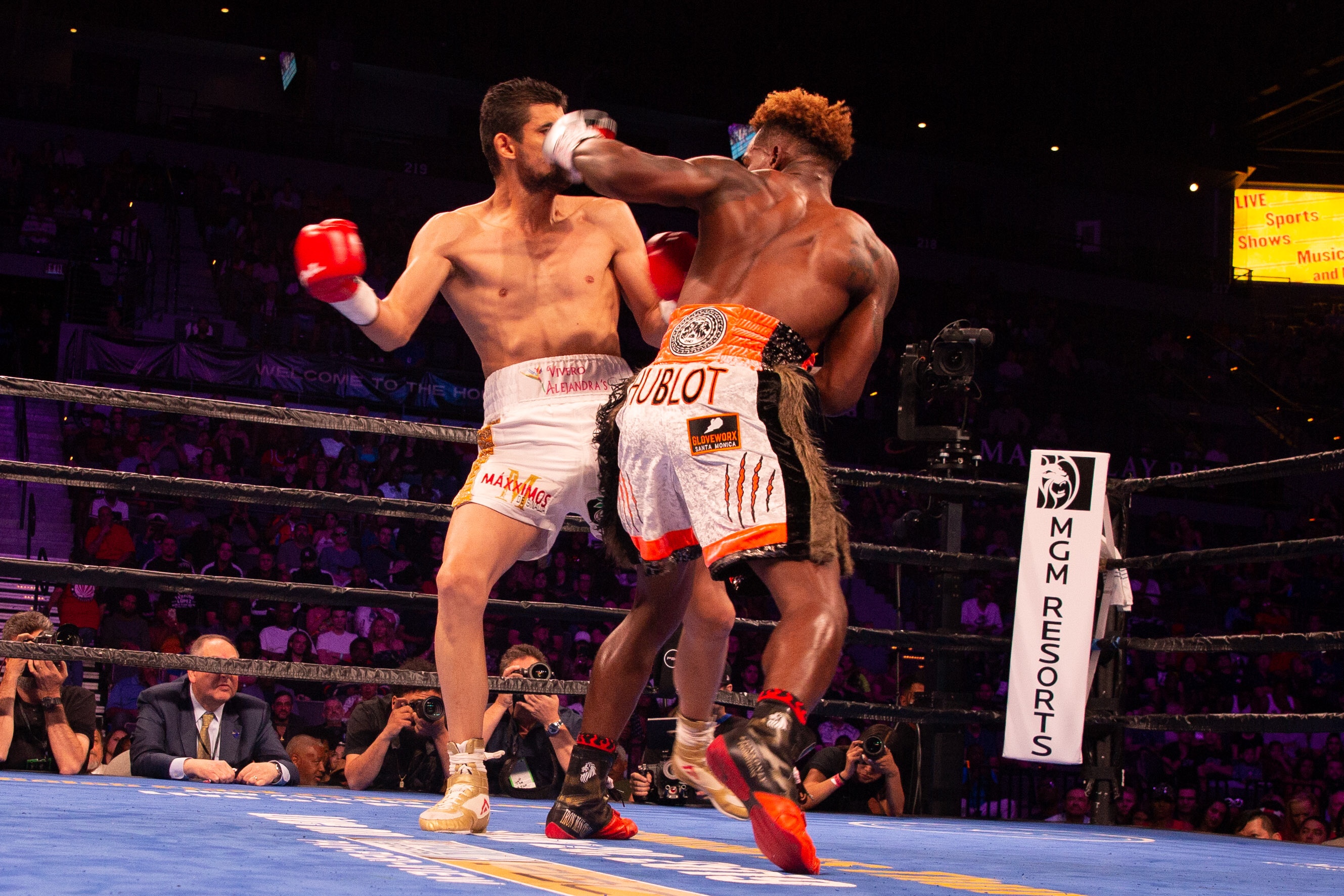 Photos By: Leo Wilson For Haymon Boxing
“I’m trying to be great. I plan on getting the rematch next and then getting all of the belts by the end of the year. Tony Harrison is in the building, He’s lucky he didn’t accept this fight with me. I’m a much better fighter.”
Cota, who was a bit awkward, was open for the straight right hand down the middle from the opening bell. It took Charlo only a couple rounds to exploit the opening, but when he did it had devastating consequences for Cota.

Charlo, who is from Houston, scored the first knock down with a looping right that caught Cota on the chin. He went down quickly, and got up slowly on wobbly legs. Nady asked him if he wanted to continue and he said yes. As soon as Nady cleared the space, Charlo pounced on Cota like a hungry lion. He landed the one-two with lightning speed. Cota went down and the fight was over, leaving Charlo satisfied with the victory, but in a holding pattern until he gets an opportunity to regain his world championship.
In the FOX televised co-feature, sensational super welterweight prospect Joey Spencer (8-0, 6 KOs) got a stern test from Akeem Black (5-3, 2 KOs), but still managed to win a six-round unanimous decision. All three judges had Spencer winning the match 59-55, though it was by far the toughest fight of his young, promising career.
Spencer of Linden, Michigan and Chicago’s Black had a spirited back-and-forth during the press conference on Friday afternoon. Spencer vowed to knock out Black, who told him that wouldn’t happen despite his best efforts. Spencer tried to make good on his promise, but Black foiled his efforts by proving to be more than up for the challenge. There were no knockdowns and neither fighter was ever in any trouble real trouble, though Black did give Spencer a bloody nose midway through the fight.
It was a much tougher fight than Spencer anticipated. 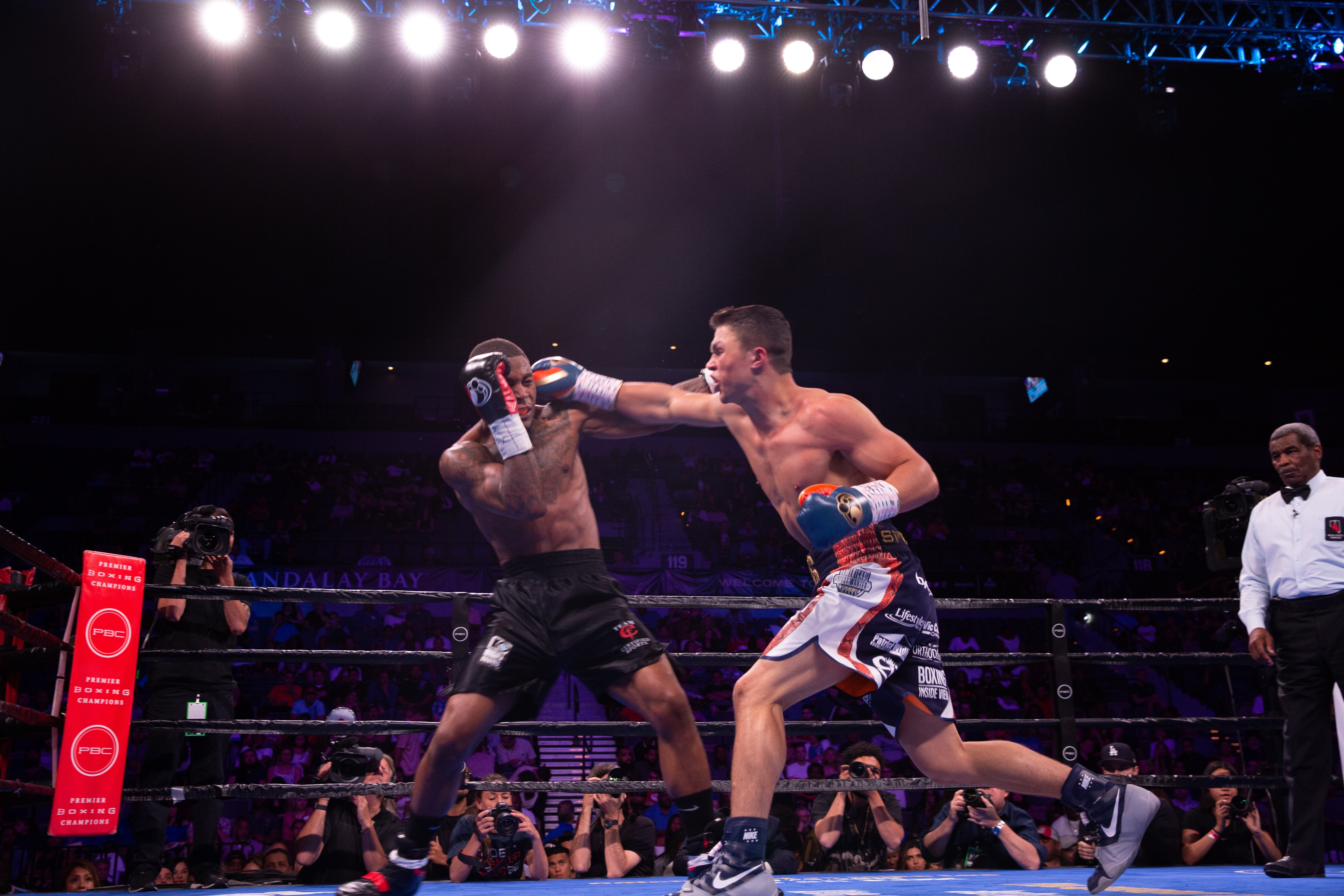 “It was a war. I think it will make me a better fighter,” Spencer said. “I learned from this. I learned to not load up my punches so much. Use some more feints and work behind the jabs a little more.
“I knew he was going to be tough. I think it went maybe a little differently than I expected. He was a better boxing than I thought he was going to be, but I knew he was going to be tough. I want to fight again in the fall and just keep moving.”
In FOX televised opener former super bantamweight champion Guillermo Rigondeaux (19-1, 13) and Mexico’s Julio Ceja (32-4, 28 KOs) stood in the pocket and fought a close-quarters battle, neither giving and inch. That strategy did not play well for Ceja. Rigondeaux, a former Cuban Olympian, ended matters at 2:59 of the eighth round with a powerful left hook that detonated on Ceja’s chin to score a TKO victory in the WBC super bantamweight title elimination match.
Click HERE to see the knockout.
“People were saying that I get on the bicycle and run a lot,” Rigondeaux said. “Well that’s not true so I wanted to show them I could fight in short distance and I wanted to get a couple of rounds in. Then that left hand came and ended the fight.” 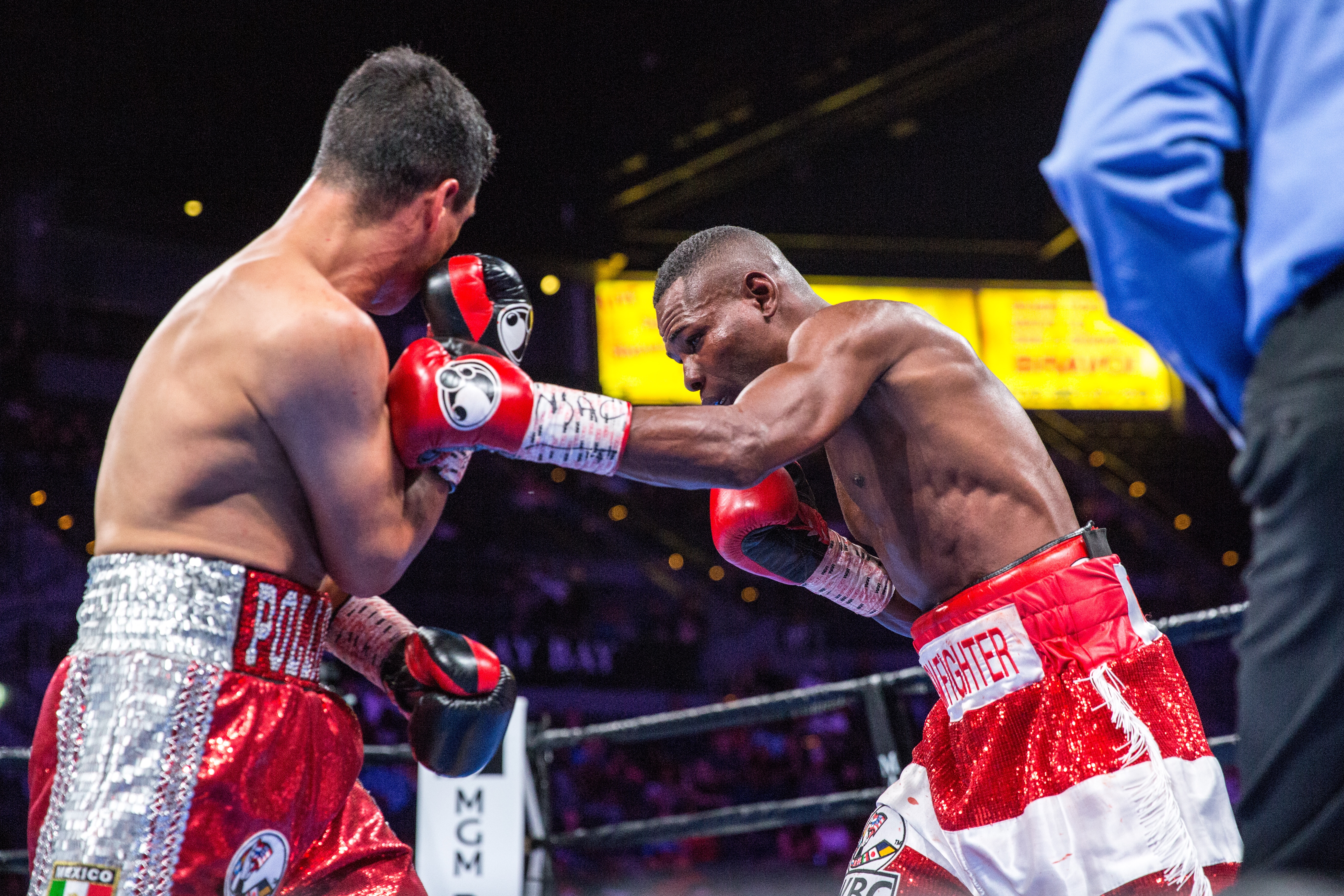 Rigondeaux’s punch landed cleanly, sending Ceja backwards on the seat of his pants. He got up to beat the count, but referee Russell Moore took one look into Ceja’s eyes, which were crossed, and waved off the fight to give Rigondeaux a thrilling victory.
“I knew I was going to catch him with the left, but it wasn’t there in the beginning. I knew in the later rounds that I could use it and actually catch him. We practiced that every day and it paid off,” Rigondeaux said.
With the win Rigondeaux gets a chance to climb back into the championship ranks. He is in line to fight the winner of the WBC super bantamweight title match between Rey Vargas and Tomoki Kameda.
Ceja rocked Rigondeaux with a pinpoint four-punch combination to the head in the sixth round. But Rigondeaux recovered quickly and fired his own combination. The back-and-forth action was so fierce that Moore took away a point from both Rigondeaux and Ceja for low blows during an exchange in the seventh round.
“I gave this 100 percent. I want to thank my opponent and especially want to thank my trainer Ronnie Shields. We worked extremely hard for this and we got the victory,” Rigondeaux said.
In the FOX televised prelims unbeaten lightweight Chris “Prime Time” Colbert (12-0, 4 KOs) used his blazing hand speed and dazzling footwork to befuddle Albert Mercado (16-3-1, 2 KOs) on the way to unanimous eight-round decision. All three judges scored it 80-72 for Colbert – a shutout.
Sensing that he was trailing by a wide margin on the scorecards, Mercado came out in the eighth round and decided to go for broke. He opened up with all-out assault to Colbert’s body. Colbert sagged on the ropes and absorbed everything Mercado threw at him and came out firing. It was a futile play as Mercado of Hartford, Connecticut punched himself out. In the end, it was too little too late for Mercado as Colbert cruised to victory.
“This wasn’t my biggest test. I wanted to bang. I was telling him in his ear saying that I wanted to bang. I wanted to give the crowd a fight,” said Colbert. “I came into this fight sick. I told my dad we have to do what we have to do. When I got to Vegas my cold got really bad. Runny nose, the whole thing, but I did what I had to do no matter what.”
A crafty southpaw from Brooklyn, Colbert was coming off a TKO victory against Mario Briones in his last fight in April. The victory over Mercado came in his third fight of 2019 and represents an accelerated pace for Colbert as he rapidly moves up the lightweight ladder.
“This is a dream come true. This is a lifestyle for me. I am shooting for the stars at this point,” Colbert said “I am the Deion Sanders of the boxing game. That is why my new ring name is Prime Time. He was never scared to throw his way. These young fighters are scared to fight me. I am not the biggest puncher, but I am the baddest man in this weight class.”
Welterweight prospect Jesus Alejandro Ramos (10-0, 9 KOs) kept his unblemished record intact with a four-round unanimous decision over Kevin Shacks (3-4-3, 3 KOs). All three judges scored the fight 40-36, giving the hard-hitting Ramos a clean sweep on the scorecards.
“It was a tough fight. I think if I had fought six rounds I could have gotten to work more. I am happy with the decision. It felt good,” said Ramos. “I have a big future ahead of me. I have a lot to live up to, but I am ready for whatever comes my way. I am happy about tonight and I can’t wait for the next time I get into the ring.”