TAMPA (June 23, 2019) – UFC veteran Artem Lobov defeated former boxing world champion Paulie Malignaggi via unanimous decision in the main event of the most talked about bare knuckle fight to date in Bare Knuckle Fighting Championship “BKFC 6: The Line is Drawn.” The 154-pound fight was a perfect storm of drama as Malignaggi’s longstanding “beef” with UFC mega-star Connor McGregor led him to facing McGregor’s stable mate and friend Lobov in Lobov’s second straight BKFC fight.
Brooklyn’s Malignaggi and Lobov, came to blows in the ring after several months of back-and-forth animosity between them on social media and in person. Both fighters showed their own strengths throughout the fight by trying to strategically outperform the other in what was a close battle in front of a sold out crowd of 4,500 enthusiastic fans from Florida Expo Hall in Tampa live on pay-per-view.
Malignaggi and Lobov showed their resistance to engage immediately, with Malignaggi confusing Lobov with his defense and foot speed. As the fight evolved, Lobov continued to come forward and pressure Malignaggi and although Maliganggi landed jabs and check hooks, it only seemed a matter of time before Lobov’s pressure got the best of him. Lobov continued to throw punches at closer range, which allowed the Russian Irishman begin to dominate. By the third round Malignaggi was cut and on his heels as the momentum had swung to Lobov.
As the action increased in rounds four and five, Lobov began the aggressor and scored the more effective punches. In the end, the judges scored the contest for Lobov 48-47 unanimously.
“This was an emotional fight for me,” said Lobov. “I started more on back foot than usual, but still pressed and stalked him. Even though many people talk a lot about fighting and Paulie had a lot to say, he showed up to fight so I respect him for that. The feud is over and we move on. I am happy I was victorious tonight and I can focus back on my family and my son. It’s all about him now.” 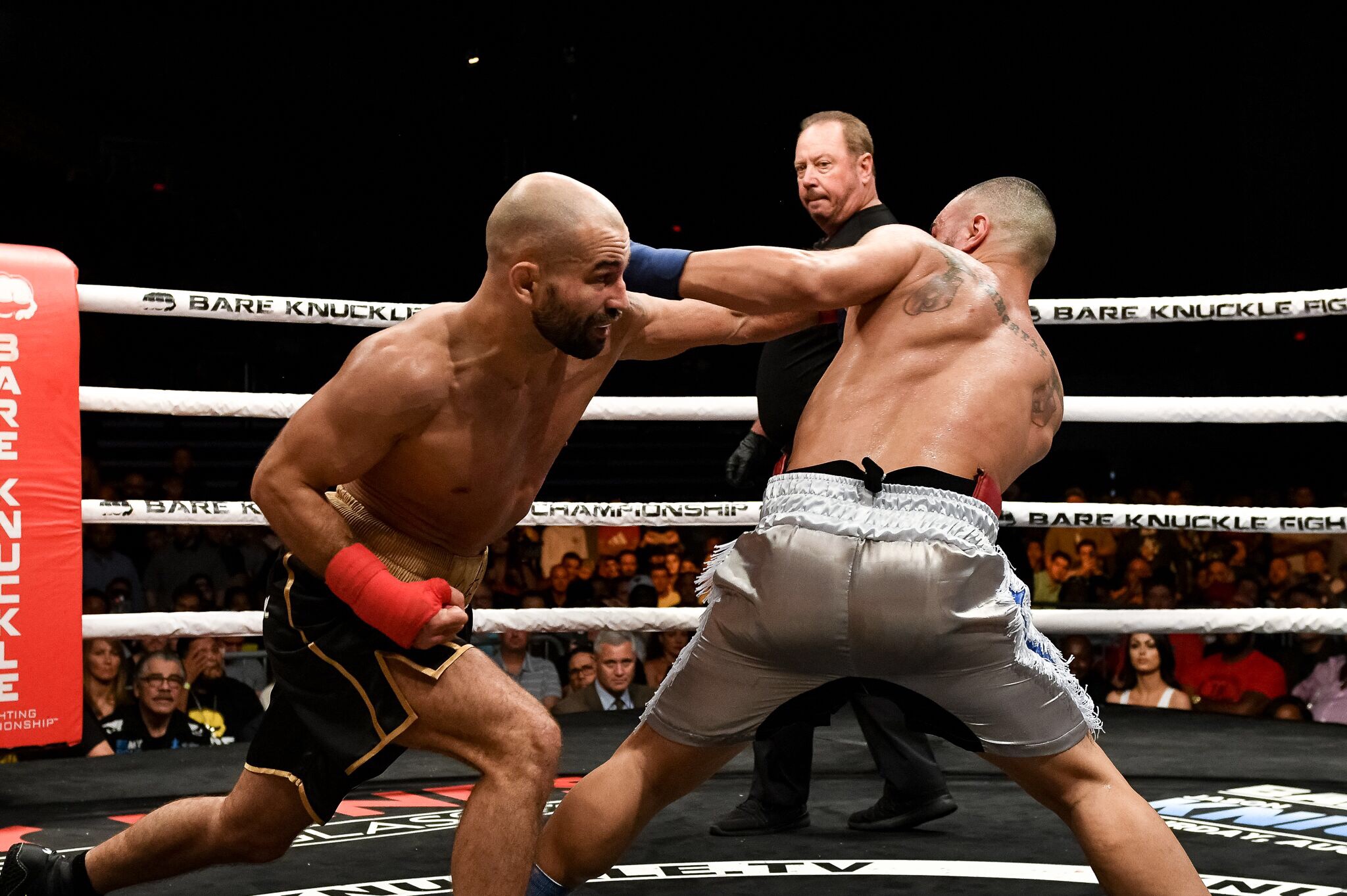 Photos By: Phil Lambert
“I am not sure what the judges were looking at, but I felt like he walked into a lot of my jabs and check left hooks,” said Malignaggi, who may have broken his hand during the fight. “Maybe it’s beneath me, but I thought I would give it a shot, give him a shot. Maybe I was wrong. I am 38 years old so I am not interested in campaigning or competing in Bare Knuckle against this loss. I kind of liked the adrenaline rush and it was different, but I am done.” 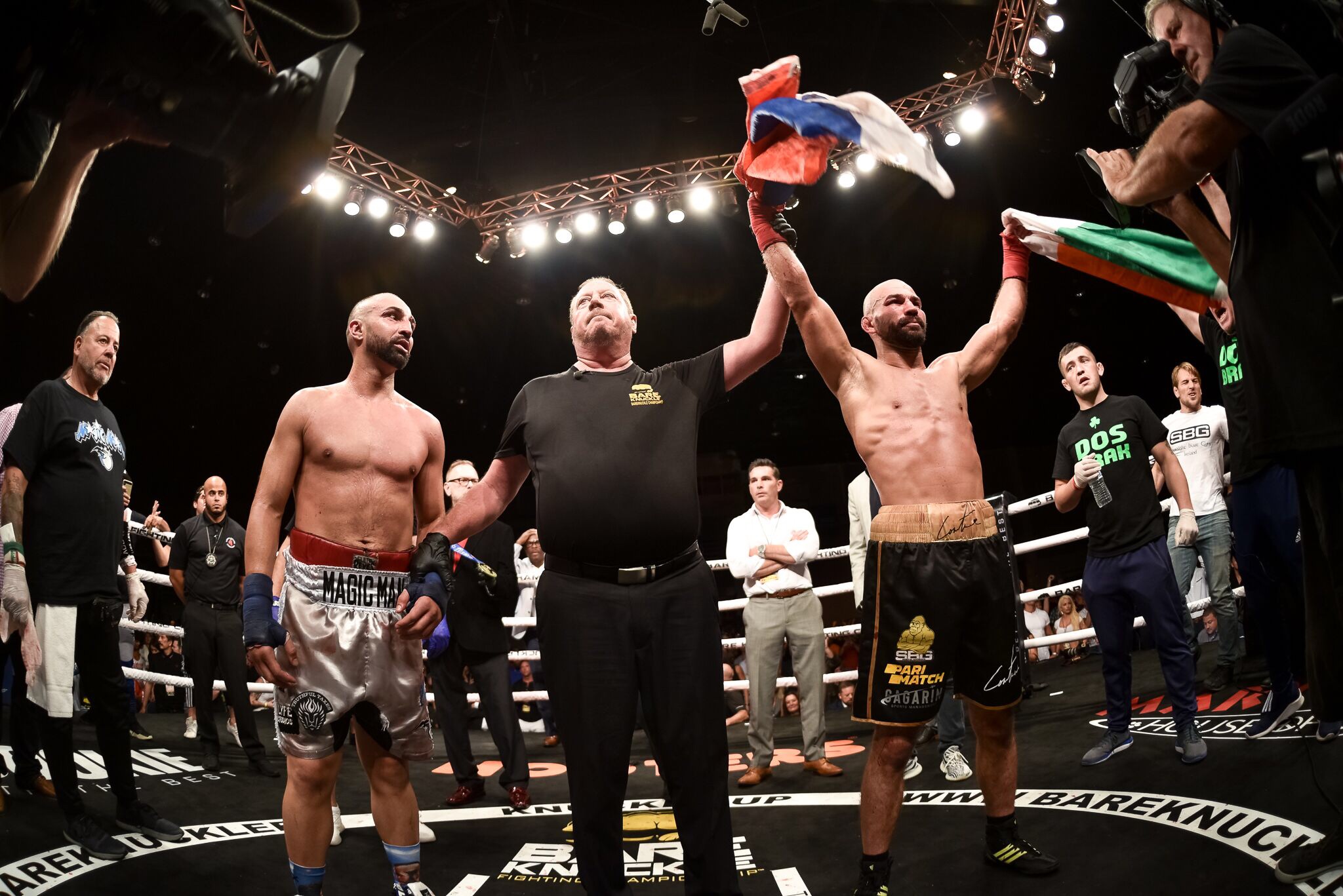 In the co-main event, UFC veteran and legend Chris Leben faced longtime MMA combatant Dakota Cochrane in a 190-pound bout where Cochrane defeated Leben in a unanimous decision with two judges scoring the contest 49-46, and the other 48-47. The first round began with a feeling out process from both fighters, each landing some effective punches. In the second round, Cochran hammered Leben with three well-timed uppercuts and several big right hands. Leben struck back and finished the round strong, but it wasn’t enough. Overall the night was Cochrane’s as he had the answer and more for everything Leben did.
“Not a lot of guys want to fight me so I give it up to Chris,” said Cochrane. “He’s an MMA legend and the second legend I beat in bare knuckle so now they can call me a legend killer. I tried to keep the forward pressure because he’s a big dude, hits hard and I didn’t want to get caught.”
The televised card also featured the finals of the BKFC Lightweight Tournament which pitted Reggie Barnett against Johnny Bedford. Bedford dominated Barnett from the outset who won the lightweight tournament and captured two titles in process. The contest was arguably the most exciting of the night as Barnett hit the canvas three times throughout the fight but never gave up, finishing the fight strong. Two judges scored the fight 47-45 and the third 48-44 all in favor of Bedford.
“I am just tougher than everyone else and I wanted to fight in a phone booth to bring it to him,” said Bedford when asked how he has transitioned so well from MMA to Bare Knuckle “I said I will be the face of this division and I will be a world champion, (and tomorrow) my kids will hear, Daddy is a world champion. I have a lot of respect for Reggie than ever before.”
“I didn’t fight my fight and fought his,” said Barnett. “I didn’t see the punches that put me on the canvas and when I got up from them I never really got my game plan back in play. I am going to heal these wounds and come back and get my belts back.”
The pay-per-view telecast opened with a light heavyweight bout between David Mundell and Drew Lipton. Mundell began the night with a crunching first round KO at 1:35 into the first round by hitting Lipton with a sequence of two punishing right hands that put him on his back for good.
The second fight on the history making pay-per-view telecast was Jim Alers vs. Elvin Brito in a middleweight bout. Alers won by way of a dramatic first round knockout at :45 in the first with a vicious uppercut.
In the night’s third fight Joe Riggs faced Walber Baards in a light heavyweight bout. With Riggs down in the second and Baards left eye swollen shut in the fourth, the bout ended with all three judges scoring the fight 47-47 for a unanimous draw in yet another crowd-pleasing fight.
In addition to the featured bouts, action came from five other bouts. Julian Lane of Mansfield, OH faced Tom Shoaff of Chicago in a 165-pound bout and Shoaff dropped by a right in the first round wound up losing a unanimous decision as all 3 judges scored 49-45 in what turned out to be a crowd pleasing, see saw back and forth battle.
Heavyweight Jamie Campbell of Ridley park PA squared off against BKFC veteran Joey Beltran who proved to be too much for Campbell by beating him by KO at 1:50 in to the second round.
BKFC President and Founder David Feldman, who almost a decade long vision was shown off tonight in this history making event.
“This is one of the fastest growing sports in the world and tonight proved this franchise is exploding into new levels of growth and worldwide appeal. All fighters brought their A games and the main and co-main events exceeded expectations,” said Feldman. “Just being here and experiencing this crowd was electrifying. This is a combat sport people are and should be paying attention to. We have a lot of shows plan for the second half of this year and plenty more to deliver in 2020. History making sounds nice and we are doing that with bare knuckle.”
The event was broadcast across the United States and Canada, exclusively on pay-per-view through MultiVision Media, Inc., on all major television distribution outlets. It was also available worldwide via stream to all in-home and out-of-home connected devices at FITE-TV and www.bareknuckle.tv.