Andrew Cancio Doubles Up With Win Over Alberto Machado

INDIO, CALIF. (June 21, 2019): Andrew “El Chango” Cancio (21-4-2, 15 KOs), the pride of Blythe, Calif., successfully defended his WBA Super Featherweight World Title via third-round knockout in his rematch against Puerto Rico’s Alberto “Explosivo”
Machado (21-2, 17 KOs). The event took place at Fantasy Springs Resort Casino in Indio, Calif. and was streamed live exclusively on DAZN. After much toe-to-toe action, Cancio landed a body shot that ended matters at 1:01 of the third round.
“It feels good,” said Andrew Cancio.“I was going for the head and the body was there and I took it. I’m here to stay. It’s not a fluke, and I’m ready for the other champions. After the knockdown, I thought he was getting up, but he knew if he got up I was coming for him.” 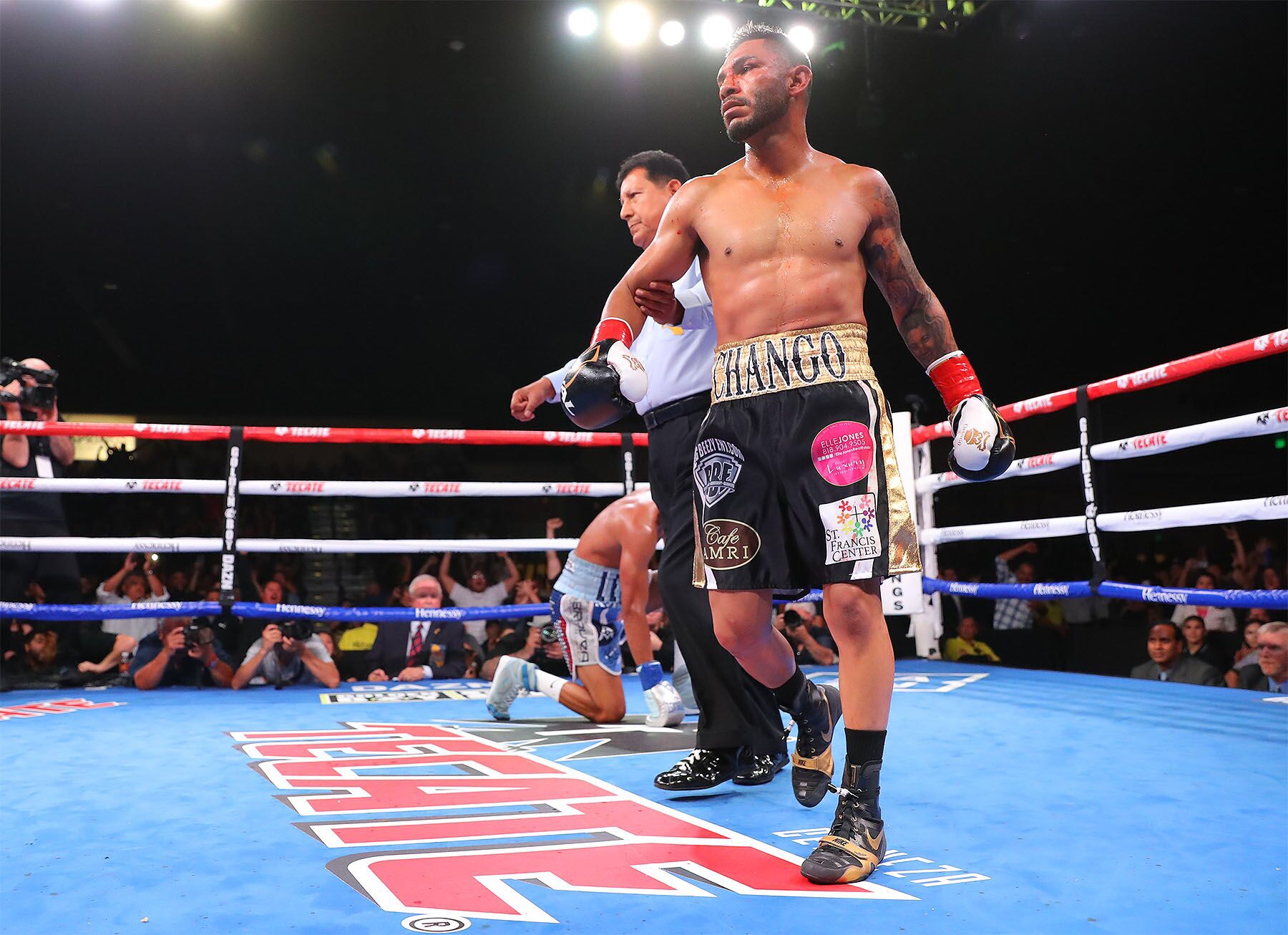 Photos By: Tom Hogan For Golden Boy Promotions
“Like I said, I’m here to stay. It’s not a fluke. I did this twice, and you got to see the new and approved Andrew Cancio. Rene Alvarado has been sitting there waiting patiently as the number one mandatory, and he’s has proven himself and he’s number one. He’s has been waiting long enough, so let me get my cuts healed up and talk to my team and promoter.. I told them I don’t care who it is, Rene Alvarado or JoJo Diaz.”
“Look he’s a great champion and he showed that tonight,” said Alberto Machado. “I had an excellent training camp and he did his job. I have to check with my team and see if I should move up because this division is small for me. Look I was ready to get up, but the referee decided to stop the fight. I wanted to keep going.It was always my decision to have this fight be my last fight in this division. It was the risk I was willing to take in this rematch. Cancio did his thing tonight, and now I have to make a decision.”
Elwin “Pulga” Soto (15-1, 10 KOs) of Mexicali, Mexico captured the WBO Light Flyweight World Title against Angel ‘Tito’ Acosta (20-2, 20 KOs) of San Juan, Puerto Rico via twelfth-round TKO in an action-packed fight. Soto won with time 0:23 of the just-mentioned round.
“The truth is I feel nice,” said Elwin Soto. “It feels great to accomplish this. I worked very hard and put a lot of effort into this. To be honest I thought I was going to lose and thank god I landed that punch and won the fight. When I first dropped him, I felt I could have stopped him, but I knew it was going 12 rounds. This is victory means a lot and dedicate this belt to my family.” 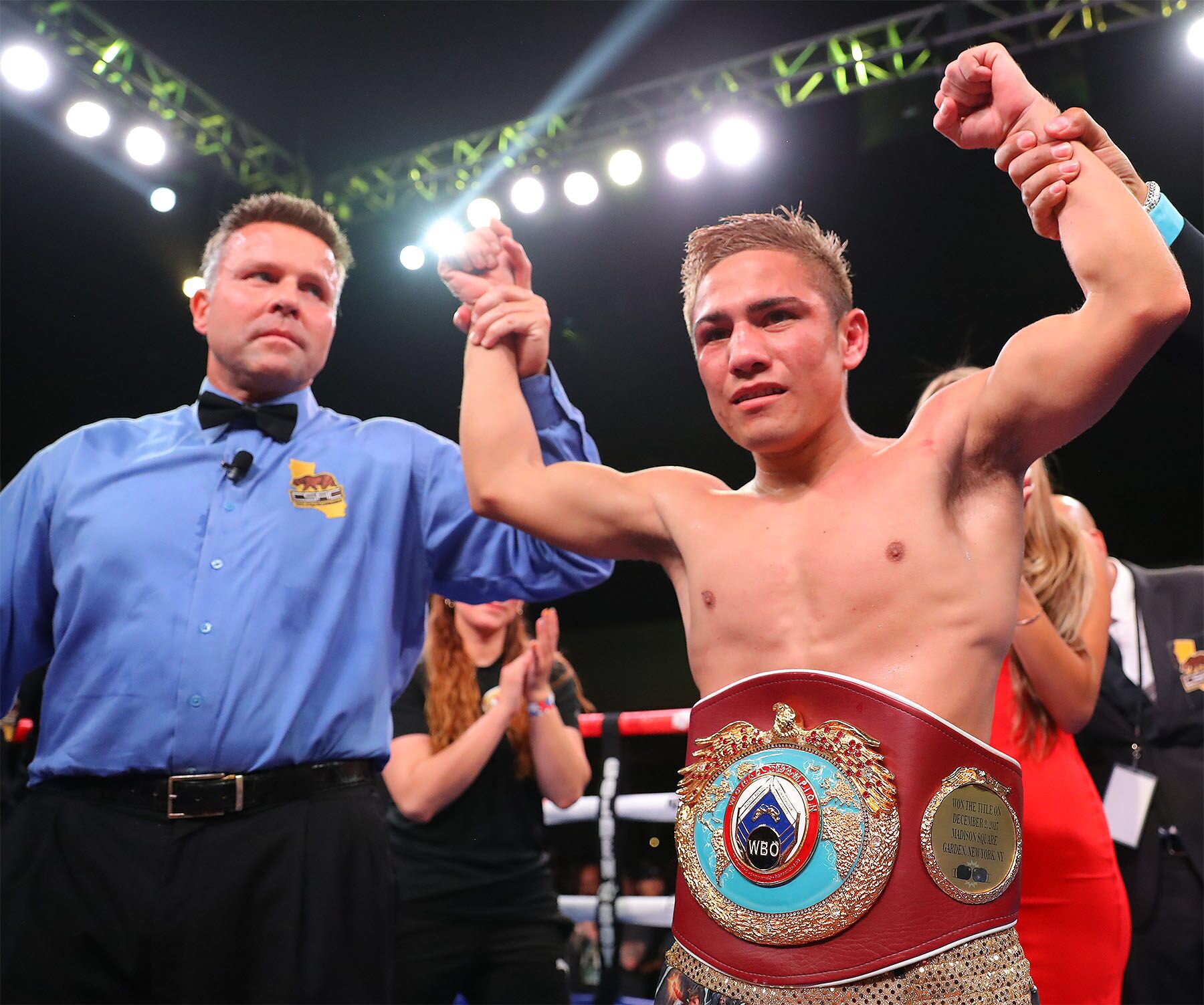 “I’m a little disappointed,” said Angel Acosta. “Sure, he hurt me but not enough for the stoppage. If I had the chance to do it again, I would have used my jab more and used my distance more just like I did in the gym. I told the referee he shouldn’t have stopped the fight. I was coming back to get him, but he shouldn’t have stopped the fight. Look it was the last round, there was not much more in the round. I would like to fight same opponent or the other champions in the division.” 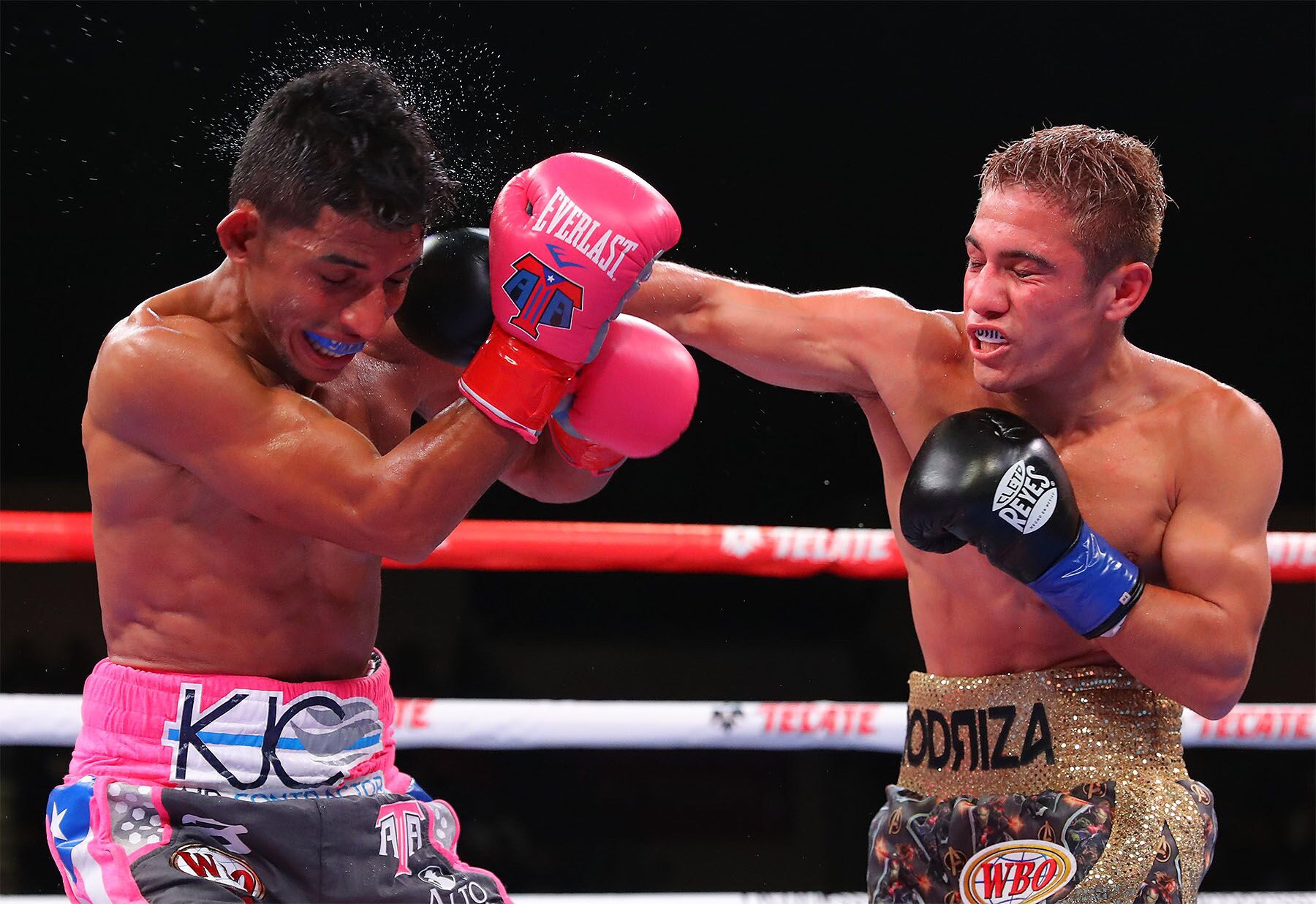 Luis Feliciano (12-0 8 KOs) of Milwaukee, Wisconsin stopped Fernando Carcamo (23-10, 18 KOs) of Sonora, Mexico in the seventh round of a super lightweight battle originally scheduled for ten rounds. Feliciano won via knockout with time of 2:16 of the aforementioned round.
“In first round he was a little slow, so I was able to pick him apart,” said Luis Feliciano. “I knew it was going be a tough opponent. He had a weight advantage and we knew that, but that’s why we worked the body, and eventually we knew that would set up the late KO. We continue to move forward.” 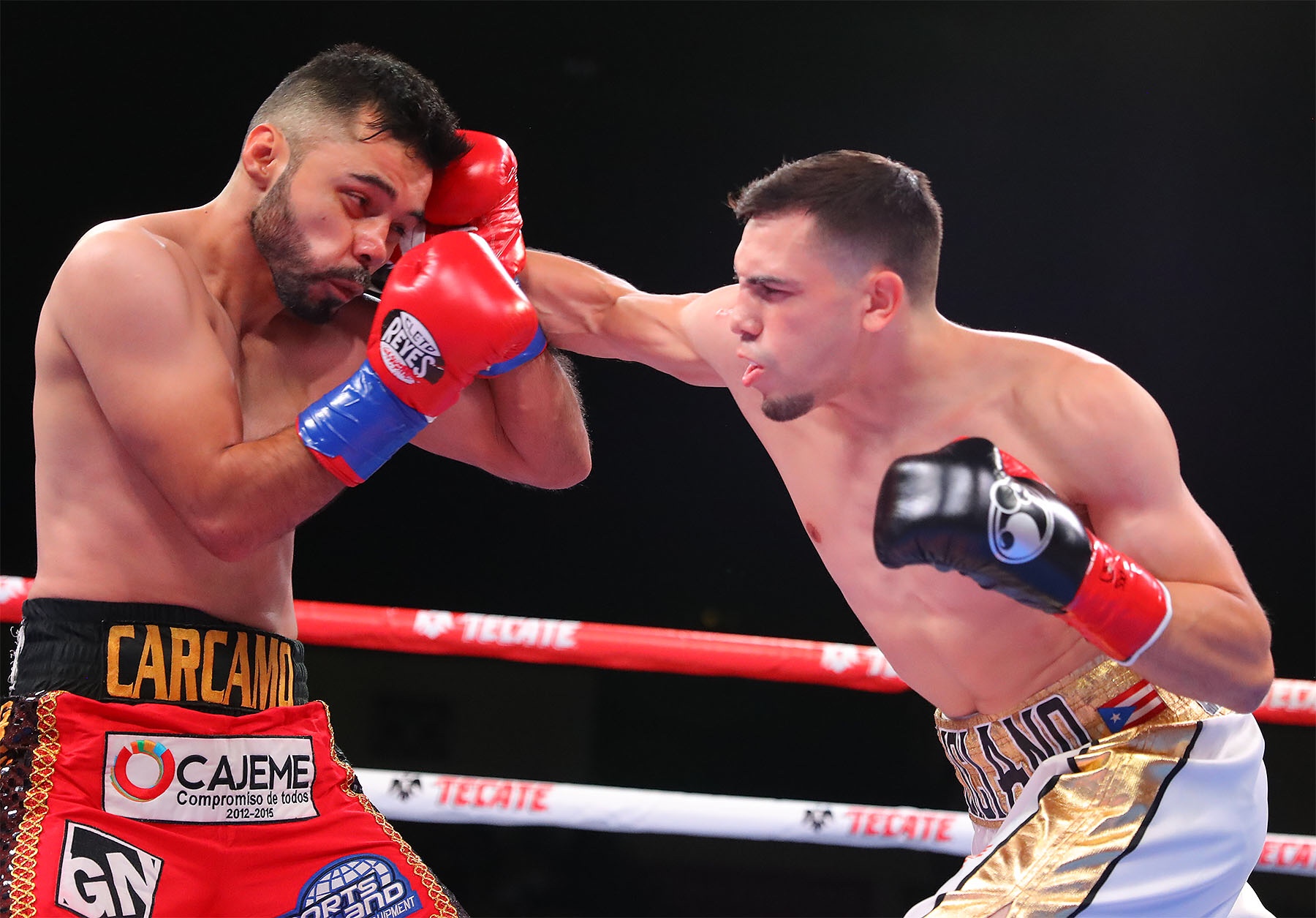 “Well I know every time that I was throwing my shot he was going to counter to the body. He’s a tough guy, a heavy hitter. I wanted to take my time, be patient. I knew it was going to go ten rounds, and that would set up at a late knockout. The important thing is we got a knockout and the win.”
“The jab is very important. We have a philosophy in camp that the jab is the most important thing in boxing. We switch to southpaw, we switch up the hands, a little light, a little hard, and stay unpredictable. That’s what we wanted to do stay unpredictable and surprise him and set up the knockout.
Blair “The Flair” Cobbs (11-0-1, 7 KOs) of Las Vegas, Nevada defeated Robert Redmond
(7-2-2, 6 KOs) of Houston, Texas via knockout in the sixth round of a welterweight fight originally scheduled for eight rounds. Cobbs won with time of 1:52 of the aforementioned round. 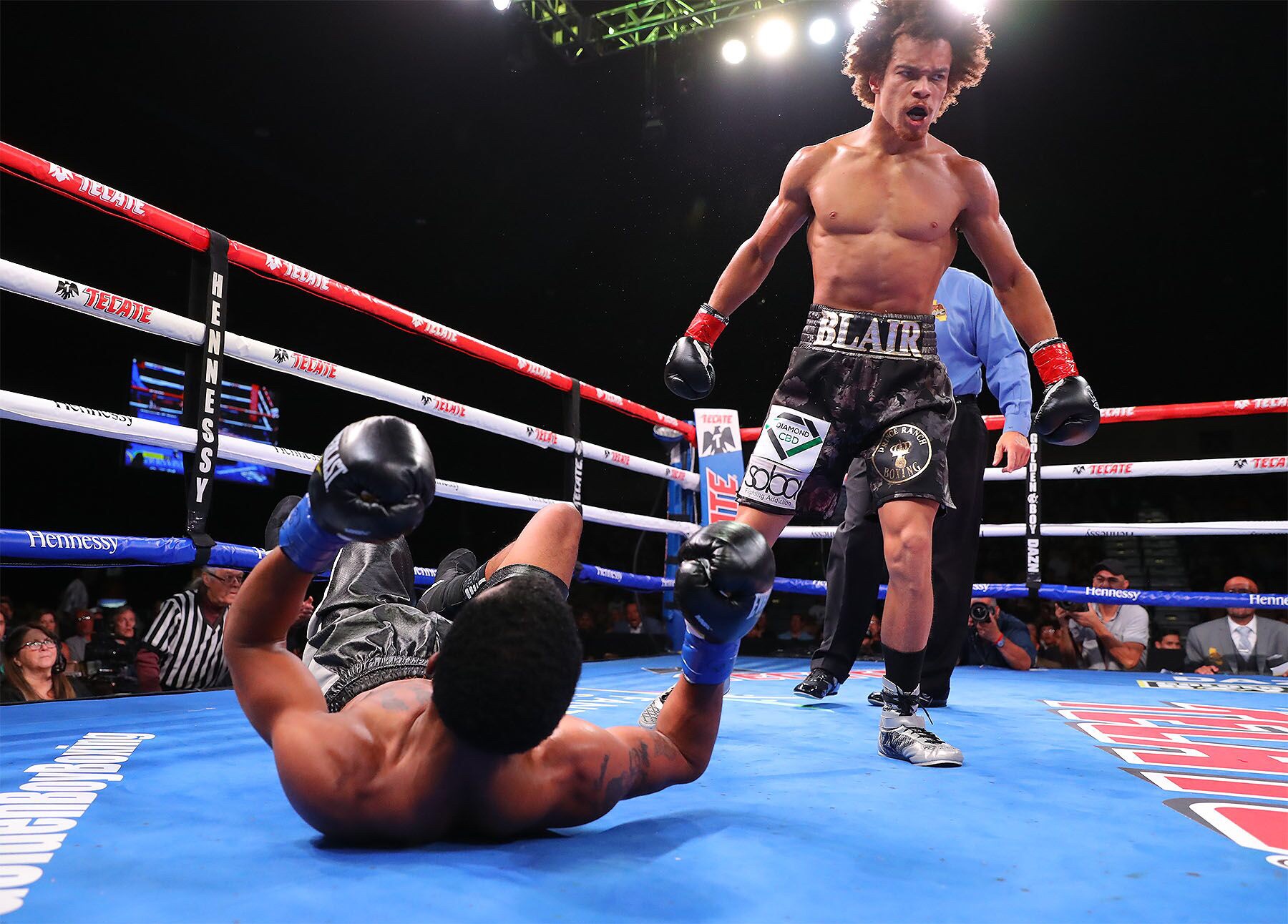 “It was wonderful experience being with you guys in the crowd,” said Blair Cobbs. “Give it up for my opponent; he did a hell of a job. He kept on fighting after the knockdown, and he’s true warrior.”
“Well, it’s was an experience. After the knockdown, I could have pushed it. I got true ability; I could have blasted him early. I decided to show a little bit more technique, be a little calmer in there, show my experience, and gained some experience trying to break him down through the rounds little by little.”
Aaron “Silencer” Mckenna (8-0, 5 KOs) of Monaghan, Ireland stopped Daniel Perales
(10-18-2, 5 KOs) of Monterrey, Mexico in the second round of a super welterweight fight originally slated for six rounds. Mckenna won with time of 0:42 of the aforementioned round. 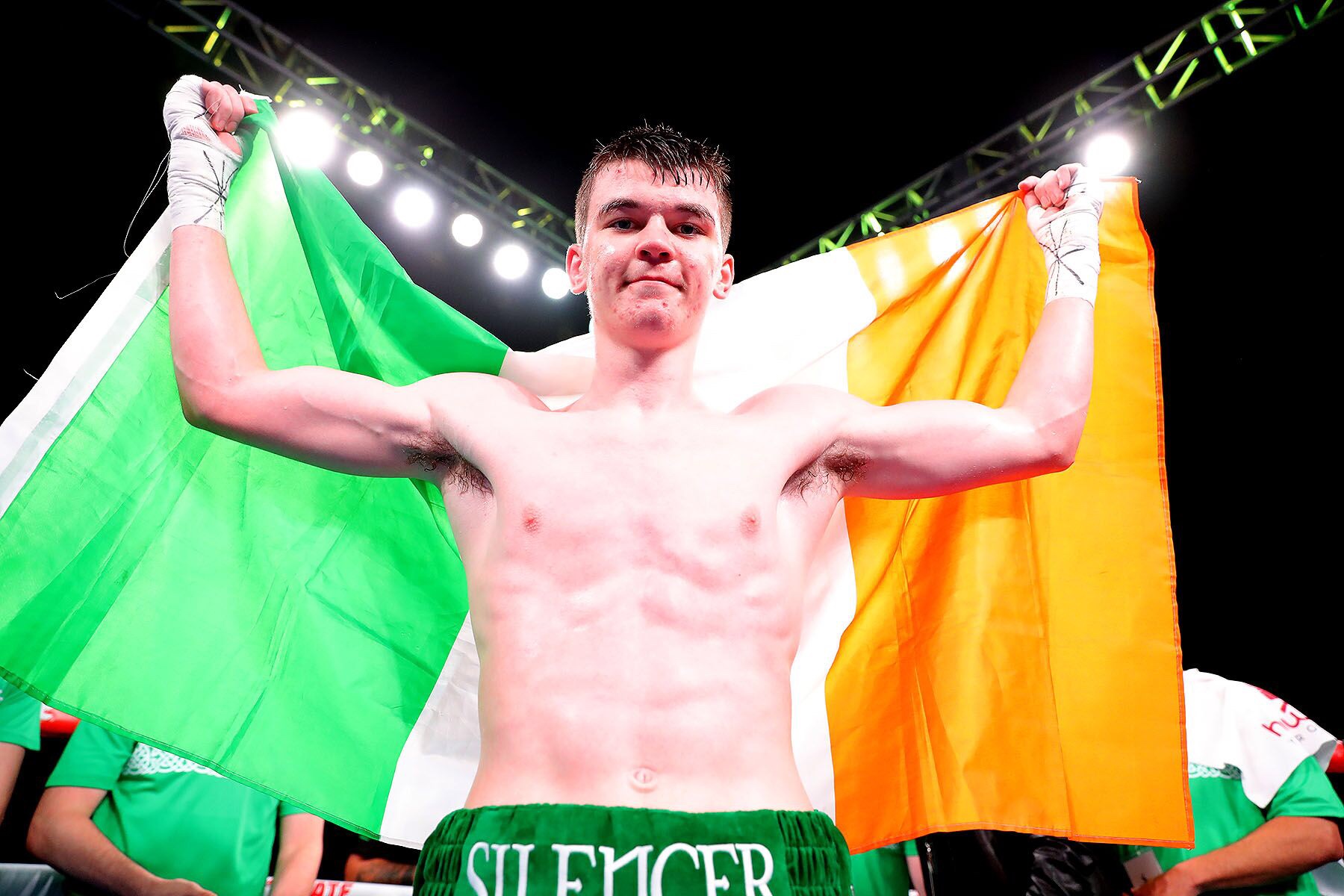 “Once I landed the first hard shot, I knew he wouldn’t be able to take more,” said Aaron Mckenna.“I stepped it up, and that’s how I got the second-round victory. I want to become a world champion. I want to be a world champion. I’m 19, so every fight is a step-up fight.”
Anthony Garnica (2-0, 1 KO) of Oakland, Calif. defeated Gilberto Duran (3-3, 3 KOs) of Yakima, Washington via unanimous decision in a four-round super bantamweight bout. Garnica won with three scores of 40-35. 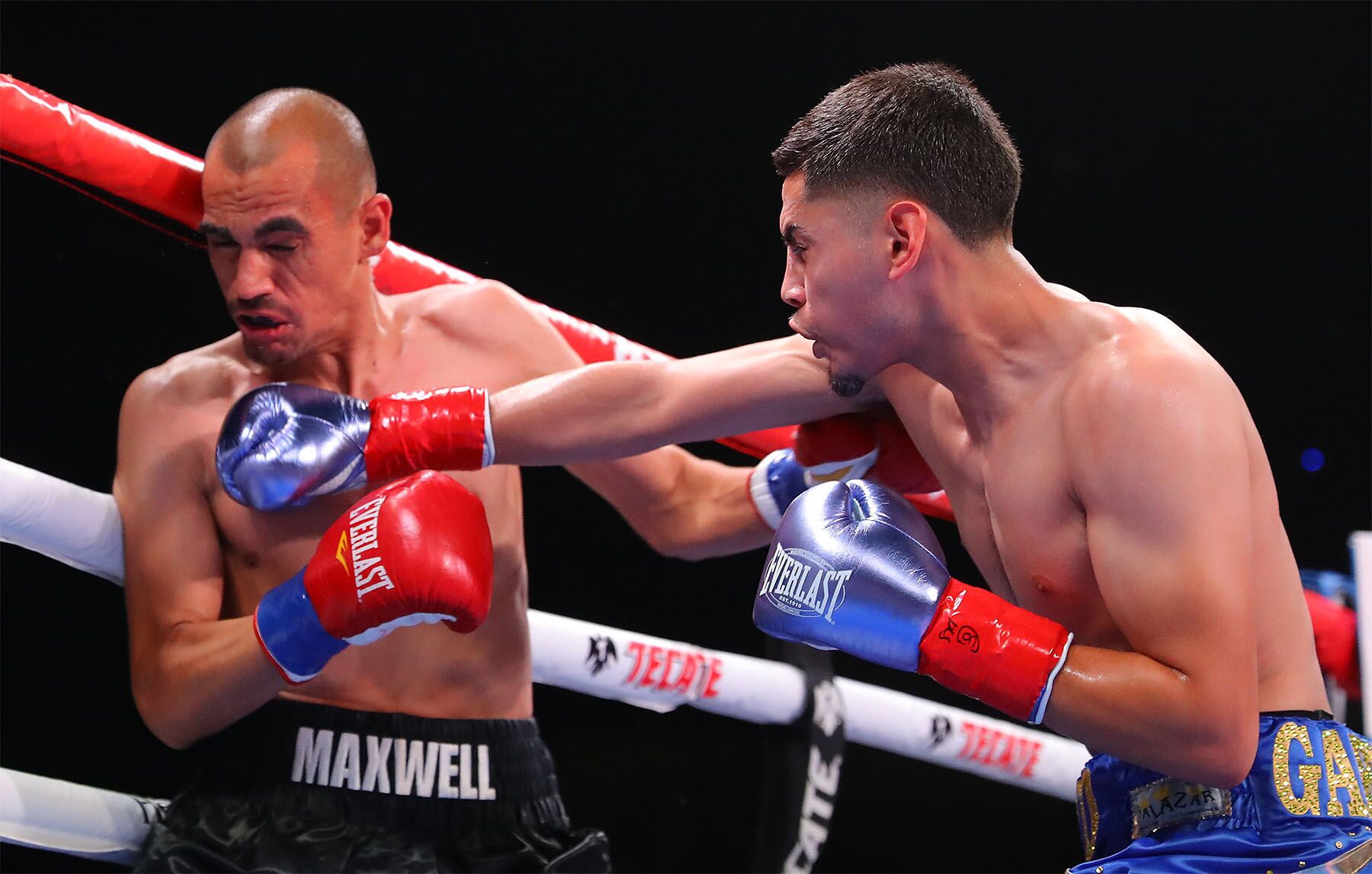 “Thanks to coaches Manny Robles and Edgar Jasso,” said Anthony Garnica.“If it weren’t for then, I wouldn’t be here. I’m coming off the amateurs. There’s good vibes at the gym [Legendz, where Andy Ruiz trains]. Nowadays everyone wants to take coach away to interview him when I’m working with him!”
Emilio Rodriguez (3-1-1, 2 KOs) of Van Nuys, Calif. vs. Clay Collard (1-1-2) of Cache Valley, Utah ended in a majority draw of a four-round super middleweight fight. One judge scored 40-36 for Rodriguez while two judges scored it 38-38, and 38-38. 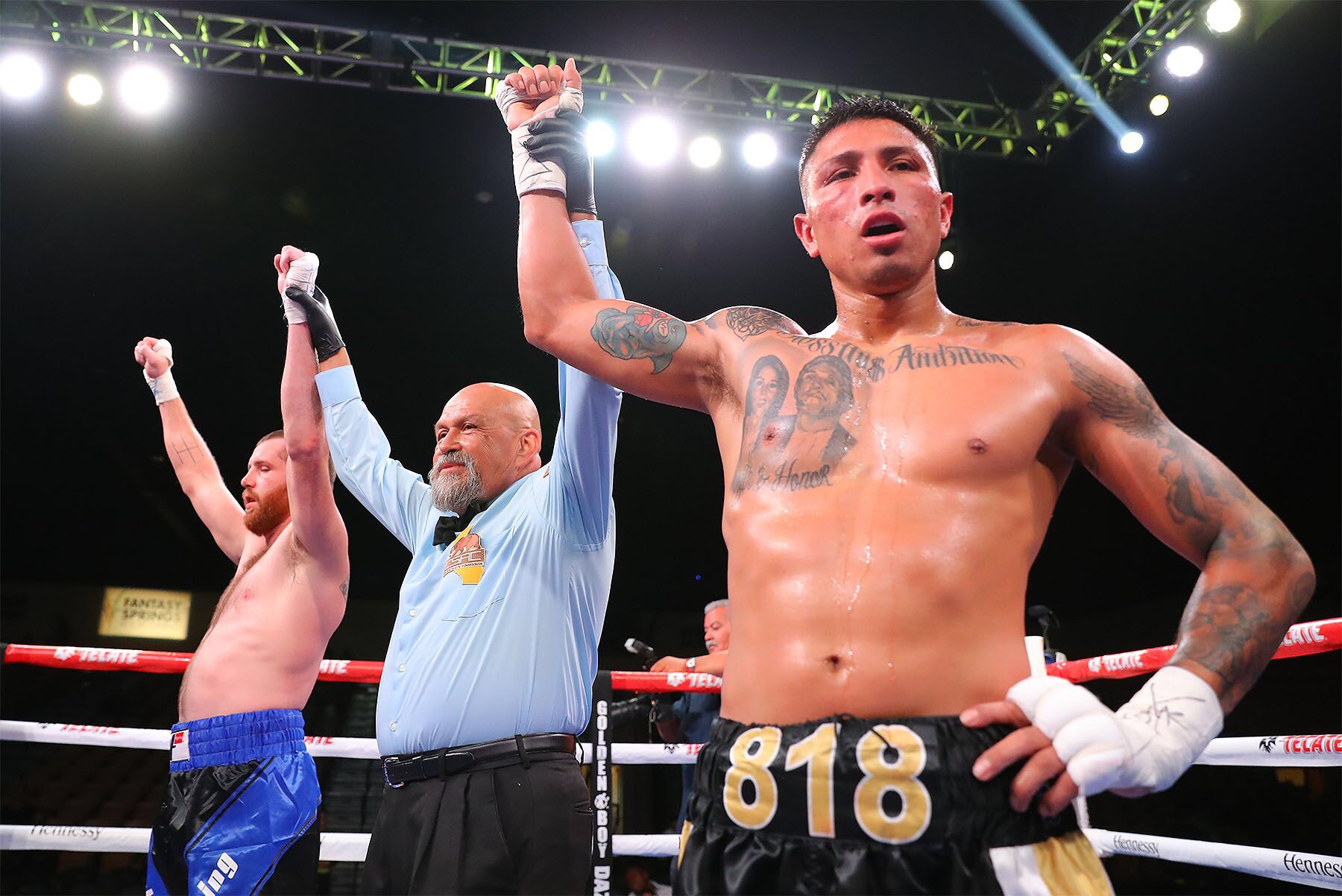 “He is a tough guy. I didn’t know too much about him,” said Emilio Rodriguez.“I knew he had an MMA background. I think I should have boxed him better, but he did his job by earning a draw. I take my hat off to him.”