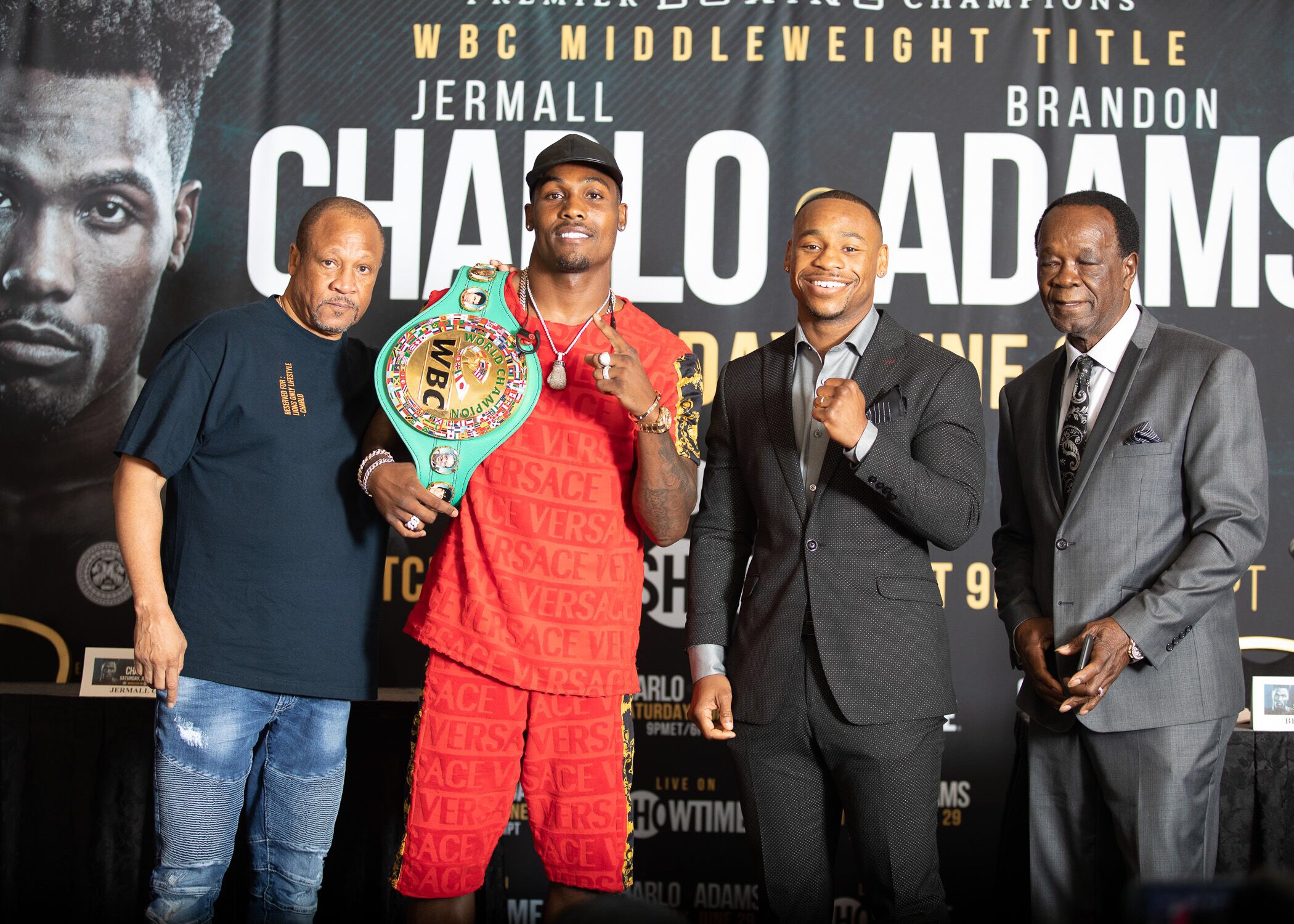 PHOTOS BY: ANDREW KING FOR SHOWTIME
Tickets for the live event, which is promoted by Lions Only Promotions and TGB Promotions, are on sale now and can be purchased through Ticketmaster. Charlo vs. Adams is promoted in association with Banner Promotions and The Tournament of Contenders.
In the SHOWTIME CHAMPIONSHIP BOXING® main event, Charlo will fight in Houston for the first time since 2012, as he looks to further cement his place amongst the middleweight elite against Adams, who shot up the 160-pound rankings by winning the 2018 reboot of The Contender.
Here is what the press conference participants had to say Thursday from Hotel ZaZa Museum District in Houston:
JERMALL CHARLO
“Me and my brother Jermell have been through so much in boxing. We’ve been doing it since we were eight-years-old. To make it to this world class level and to do it for Houston, it feels great. 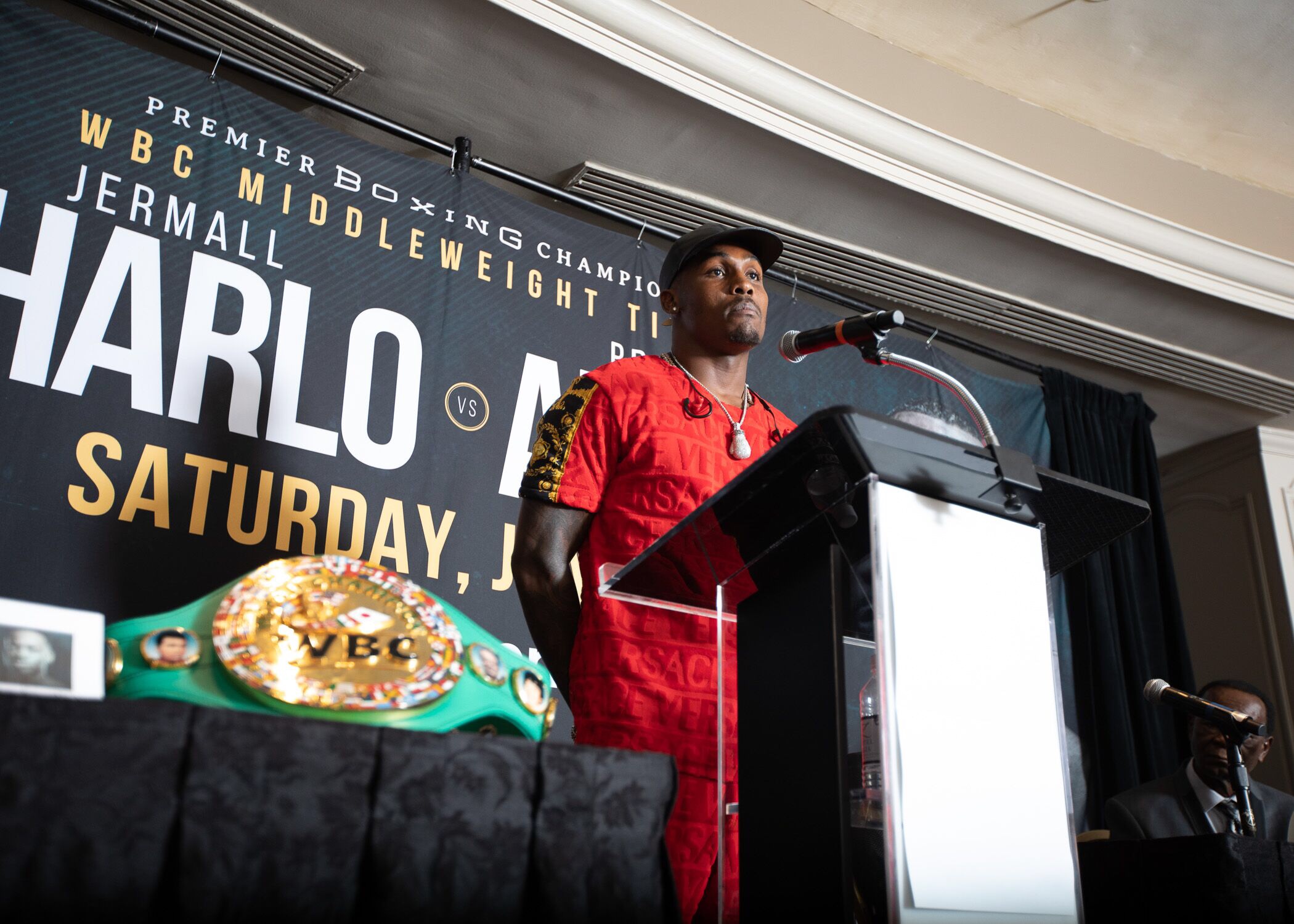 “It’s going to be fireworks. I’m coming for the knockout every time. Houston is hot and the heat is going to be there fight night. I’m going to do what I normally do and give the crowd excitement.
“Ronnie Shields has changed me from being a kid to realizing who I am as a man in the sport of boxing. He’s had world champions before me so I know he can judge my progression. He’s going to make sure I stay at this level.
“I’m walking in the ring and I’m handling my business. This is definitely a step up fight for Brandon Adams, but I’m only worried about what I have to do. I’m just going to prepare to be my best. We’re going to both give it our all and I will be victorious.
“Boxing is about experiences and I’m still learning. I’m going to have my ups and downs, because no fighter is perfect. But I will always prepare myself well and that’s why I’m still undefeated. I needed a fight like my last one to get even better.
“I’m going to finish this fight. My goal is to make quick work of Brandon and show him that there are levels to this. You might be a contender, but it’s another thing to be a champion.
“I get a lot of juice from the hometown crowd. Just having my family there alone is what I really need to get the nerves and excitement to where I need them. I’m going to be comfortable and I’m going to stick to my game plan. I’m not here to make mistakes.
“Thus far camp has been great. I feel awesome and I’m well prepared. It’s an amazing feeling to be fighting in my hometown. It’s almost a dream come true to me. To have my own card at this level and on this stage, it shows the support Houston has for me.”
BRANDON ADAMS
“I appreciate the opportunity I have to step into the ring with this man across from me. I’m super excited about it and I can’t wait. These are two top fighters getting in the ring and we’re going to give the fans a show. 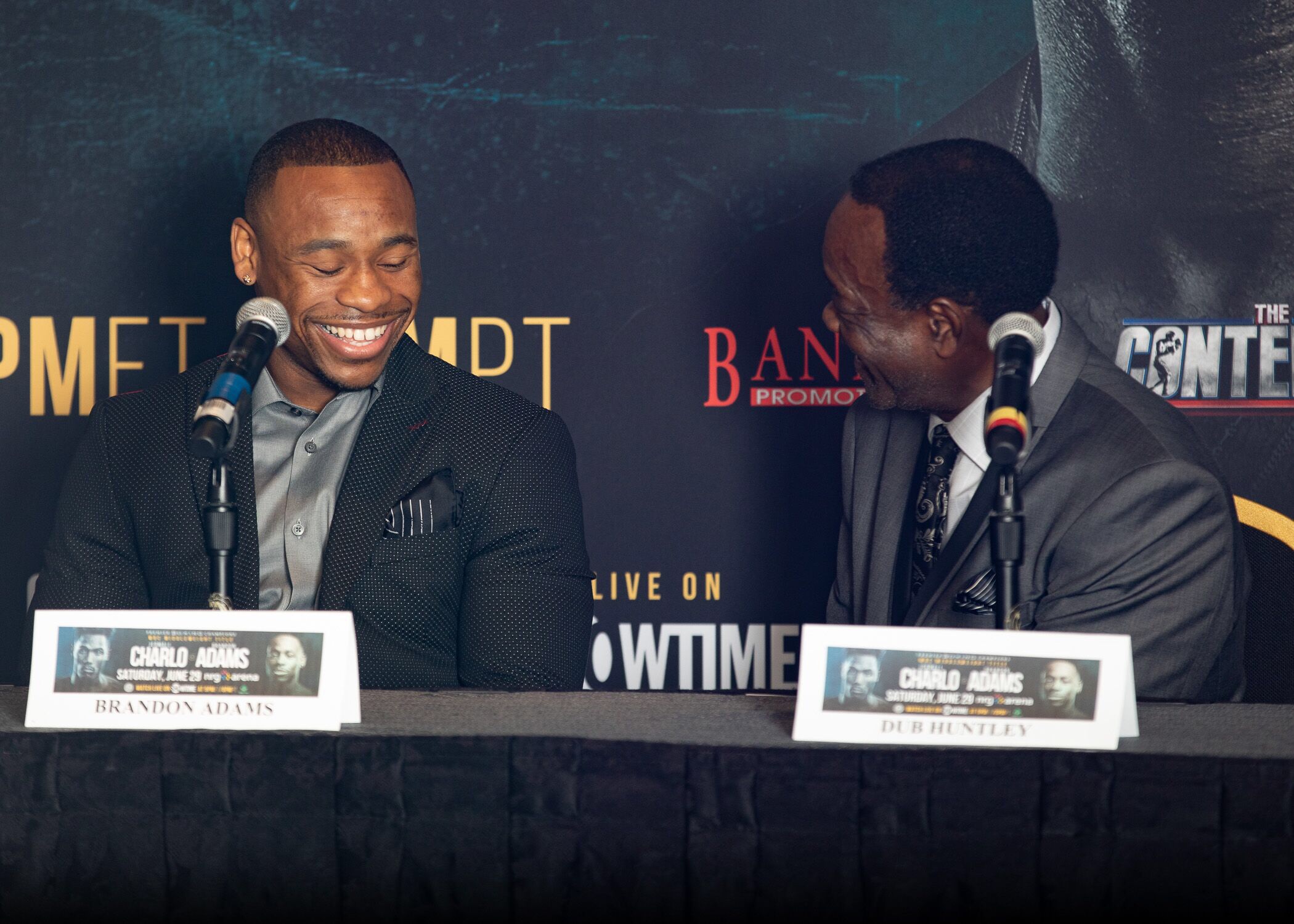 “It’s not just what I see in Jermall, it’s what I believe in myself. The combo of working with Dub Huntley and Freddie Roach is perfect. They are both seasoned vets and they teach me something new every day.
“I didn’t expect my road to be easy because it’s never been easy for me. I’m on the road and I understand that. I’m prepared to pack my bags and go wherever I need to, so that I can become what I’m supposed to become. The best man will win on June 29.
“Before The Contender I felt that I didn’t have an opportunity to show how good I am. During the whole series it was about getting back in the ring and shaking off the rust, then showcasing who I am.
“Winning The Contender helped get me here, but I always had confidence and believed in myself since day one. In choosing to accept Charlo’s challenge, I had it in my mind that I belong here.
“It was pressure every time I fought on The Contender. Each round were quality opponents leading up to the final and all of that will prepare me for Charlo. He deserves everything he’s gotten and I respect him as a man, but I’m going to take advantage of this opportunity.
“His team didn’t have to fight me, but they chose to. I appreciate his fans coming out to support him because they’ll see both of us. Hopefully I can win some of them over.”
RONNIE SHIELDS, Charlo’s Trainer
“We’ve done a lot of studying of Brandon Adams and he’s a really good fighter. Winning The Contender is not an easy feat. He’s truly a contender, so we have to make sure we’re working hard every single day. 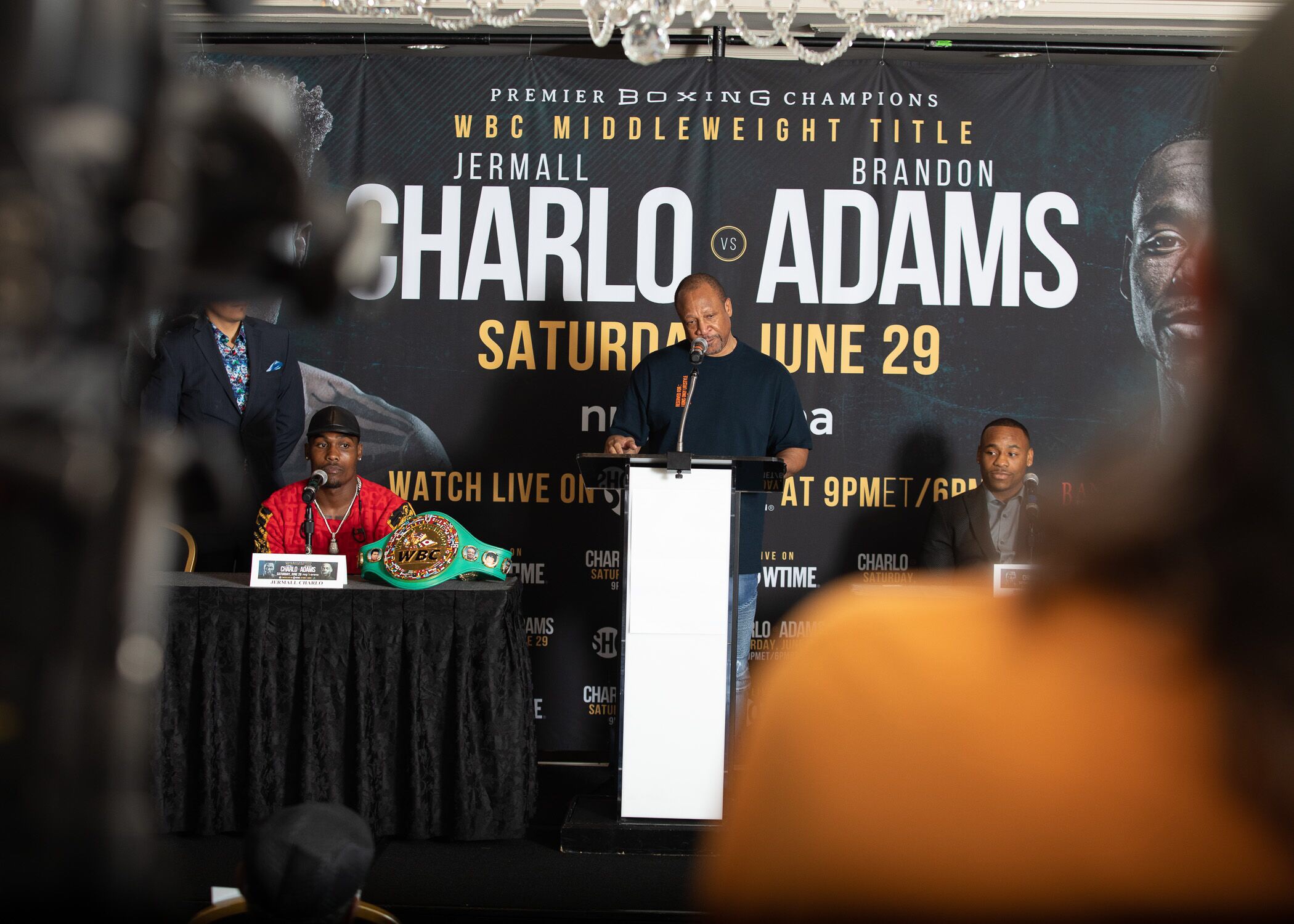 “We’re not sitting back and waiting for someone to fight us. We have to continue to be busy. You still have to fight hard fights when you’re at the top and that’s what we’re doing. We’re preparing the right way.
“I’m so happy that everybody has come out to support Jermall because he’s been waiting to make his homecoming and this is it. It’s important to see everyone on his side.”
DUB HUNTLEY, Adams’ Trainer
“I hope everybody comes out for this one because it’s going to be a great fight. I’ve been with Brandon for a long time and I know that he’s going to win this fight and put on a memorable performance. Charlo is a great fighter but Brandon has all the tools necessary to come into his hometown and get the victory.”
#          #          #
ABOUT CHARLO VS. ADAMS
Charlo vs. Adams will pit unbeaten WBC Interim Middleweight Champion and Houston-native Jermall Charlo against middleweight contender Brandon Adams in Charlo’s hometown return Saturday, June 29 live on SHOWTIME from NRG Arena in Houston and presented by Premier Boxing Champions.