Jessica McCaskill will defend her WBA and WBC World Super-Lightweight titles against old foe Erica Farias at the Wintrust Arena in Chicago on Saturday October 12, live on DAZN in the US and on Sky Sports in the UK.
TICKETS ARE ON SALE NOW FROM $40 HERE
McCaskill (7-2 3 KOs) ripped the WBC crown from Farias (26-3 10 KOs) last October at the Wintrust Arena in her hometown, with her victory the first in a World title fight live on DAZN in the US, putting in a then career-best performance to dethrone the Argentine in her first defense.

Chicago’s McCaskill has voiced her desire to rematch undisputed Lightweight champion Katie Taylor and also face seven-weight ruler Amanda Serrano, but Farias is determined to gain revenge in her first fight since defeat in Chicago. 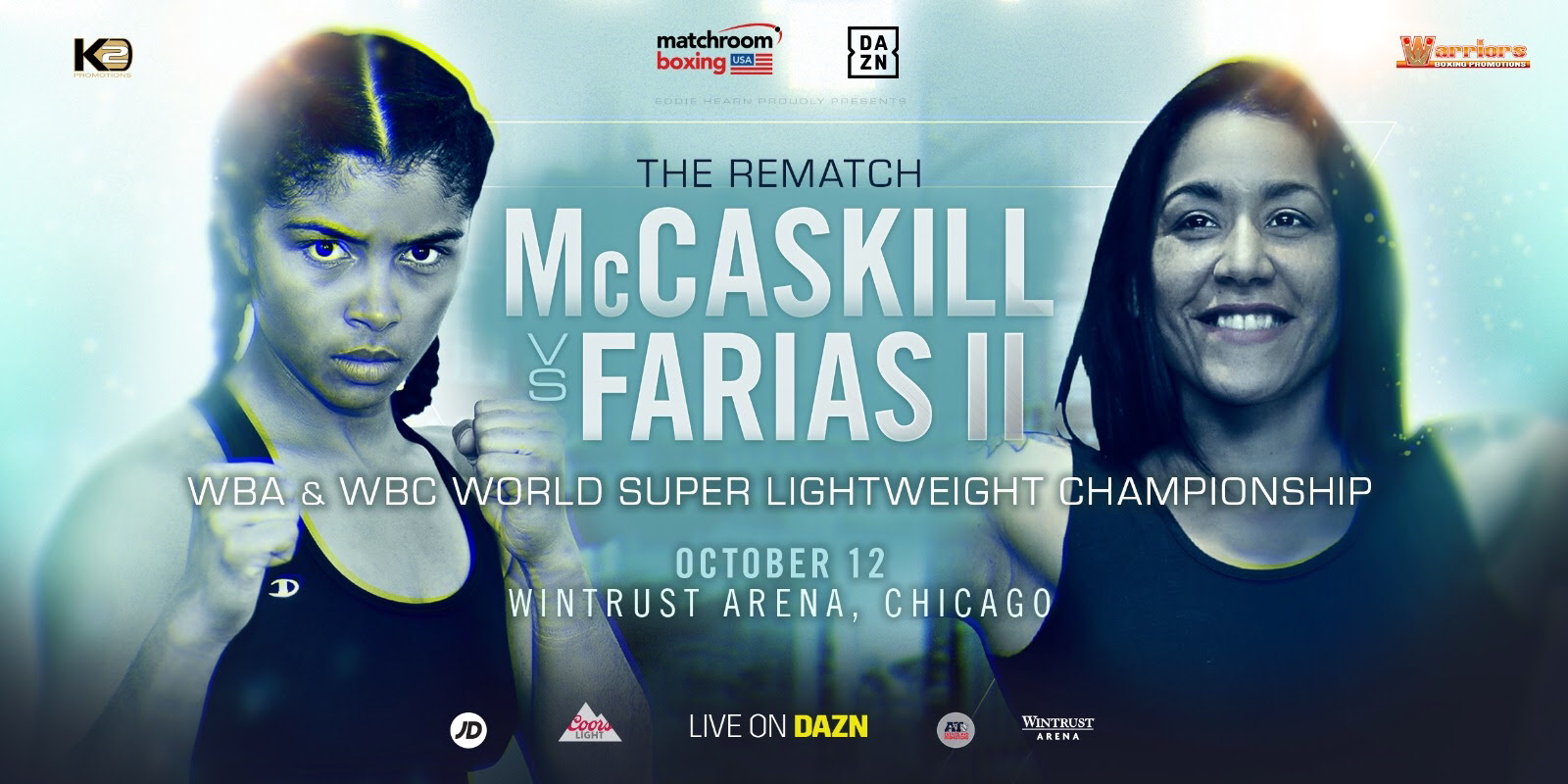 “I’m delighted to have the chance to defend my titles back at the Wintrust Arena,” said McCaskill. “It was a great night there when I beat Erica first time around. I know she will be determined to win her title back but I feel I am a better fighter since that first fight and I can’t wait to show that.

“It’s amazing to be in this position and we have a lot more goals that I want to reach, there’s more hard work to put in and more to come. Female boxers need to keep their level of professionalism up, keep training hard, take no days off. Female boxing is volatile, and you can get a call to fight any day, we’d often hear ‘I haven’t been in the gym’ and stuff like that. The fans are there, they want to watch great women fight and promoters want to put the fights on, so we must be ready to fight, and I always am.

“There are a lot of names that we want to mark off the list. Amanda Serrano won on Saturday, we’ve talked to her team and I think she’s done a lot for female boxing and I would love to share the ring with her. McCaskill-Taylor 2 is something that we want and there’s the other belts out there too so there’s a lot that we can build towards and target over the next year or so, but I am fully focused on Erica and October 12.”

“I am happy to have the chance to come back to Chicago and fight Jessica again,” said Farias. “The last fight was close and I have been waiting for a shot at winning the title back – I am coming to Chicago to take back what is mine.”

McCaskill and Farias clash on a massive night of boxing on October 12 in Chicago, as former undisputed Cruiserweight king and pound-for-pound star Oleksandr Usyk makes his Heavyweight debut against unbeaten contender Tyrone Spong.

Tickets are on sale now for Usyk vs. Spong, with a stacked undercard to be released imminently. Tickets start at just $40 plus booking fees at: https://www.ticketmaster.com/event/070057139FF02C5D.