Devin Haney produced a scintillating display in dismantling Zaur Abdullaev in four rounds to land become the interim WBC World Lightweight champion at the Hulu Theater at Madison Square Garden in New York, live on DAZN in the US and on Sky Sports in the UK.

Haney (23-0 15 KOs) promised to dazzle in the biggest night of his career and first in the Big Apple, and the Las Vegas sensation backed up every word against the dangerous unbeaten Russian, showing every weapon in his arsenal over four rounds before Abdullaev’s corner pulled their man out, with the Russian suffering a suspected broken eye-socket from a crunching right hook. 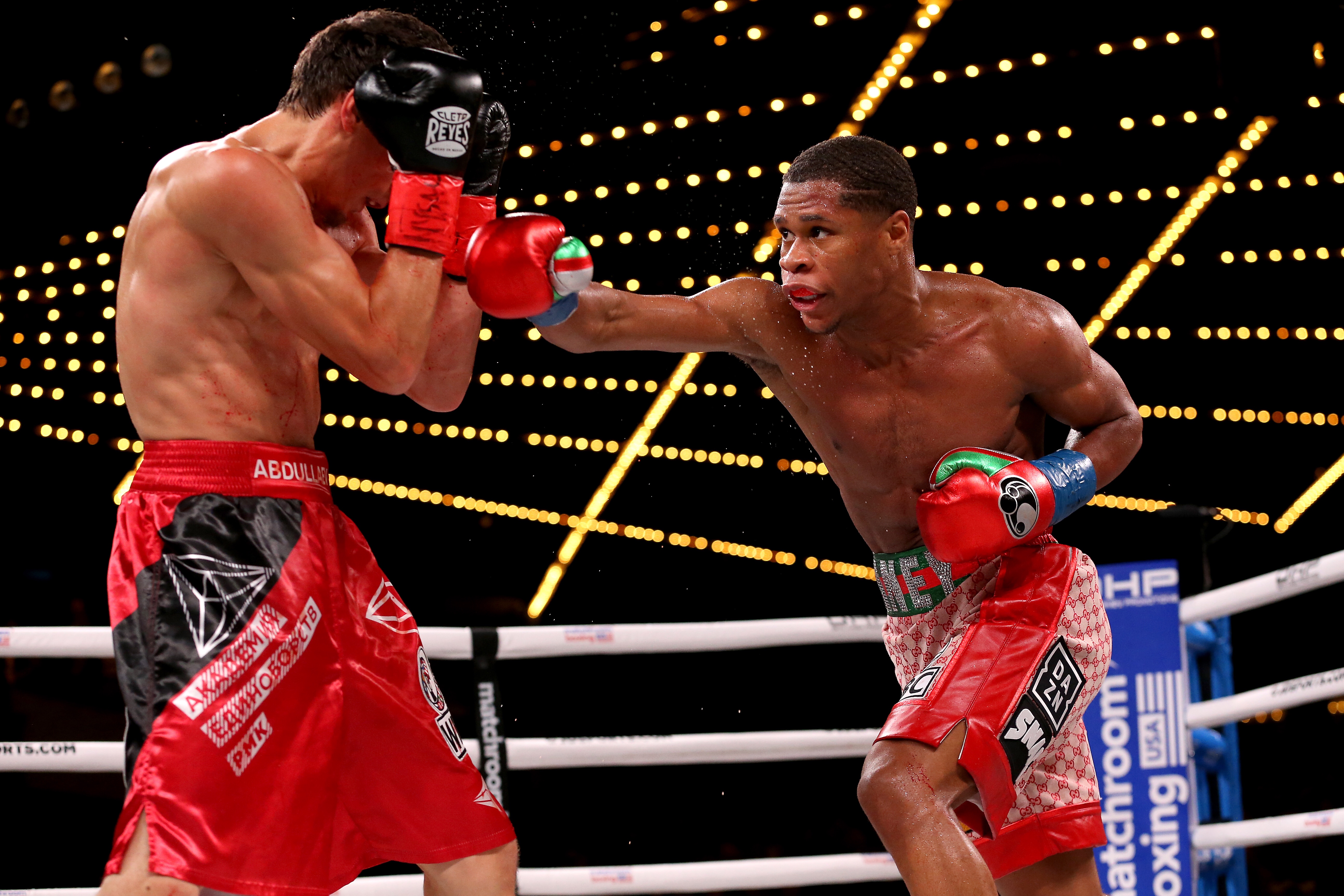 ‘The Dream’ is now mandatory challenger for the WBC crown held by Ukrainian star Vasiliy Lomachenko, who also holds the WBA and WBO straps, and the 20 year old made it clear he’s the man he wants – but also expects to be back in action soon, targeting a return on the KSI vs. Logan Paul rematch bill at STAPLES Center in Los Angeles on November 9, live on DAZN.

“It’s No-machenko because he doesn’t want to fight me,” said Haney. “Lomachenko, let’s get this fight going! Abdullaev was number two and I destroyed him. If I’m so easy, No-machenko should fight me and get me out of the way.

“I’ve been talking to Eddie Hearn about November 9. I think it’s good for the sport of boxing, brings new fans, and gets me back in the ring.

“I felt good on my performance. I wasn’t nearly done beating him, I was just warming up. I’m happy with the win.

“I don’t usually study because I learn fast. I can make quick adjustments anytime and that’s what I did tonight.”

Amanda Serrano was dominant in taking the WBO World Featherweight title from Heather Hardy. Serrano (37-1-1 27 KOs) opened at a ferocious pace and two minutes of non-stop offense looked to have the champion in real trouble. Hardy (22-1 4 KOs) weathered the storm and, in typical gutsy fashion, gave as good as she got to the very end against her fellow Brooklyn star, but the seven-weight Puerto Rican great romped to victory on the cards 98-91 twice and 98-92 to add the interim WBC title to Hardy’s WBO belt. 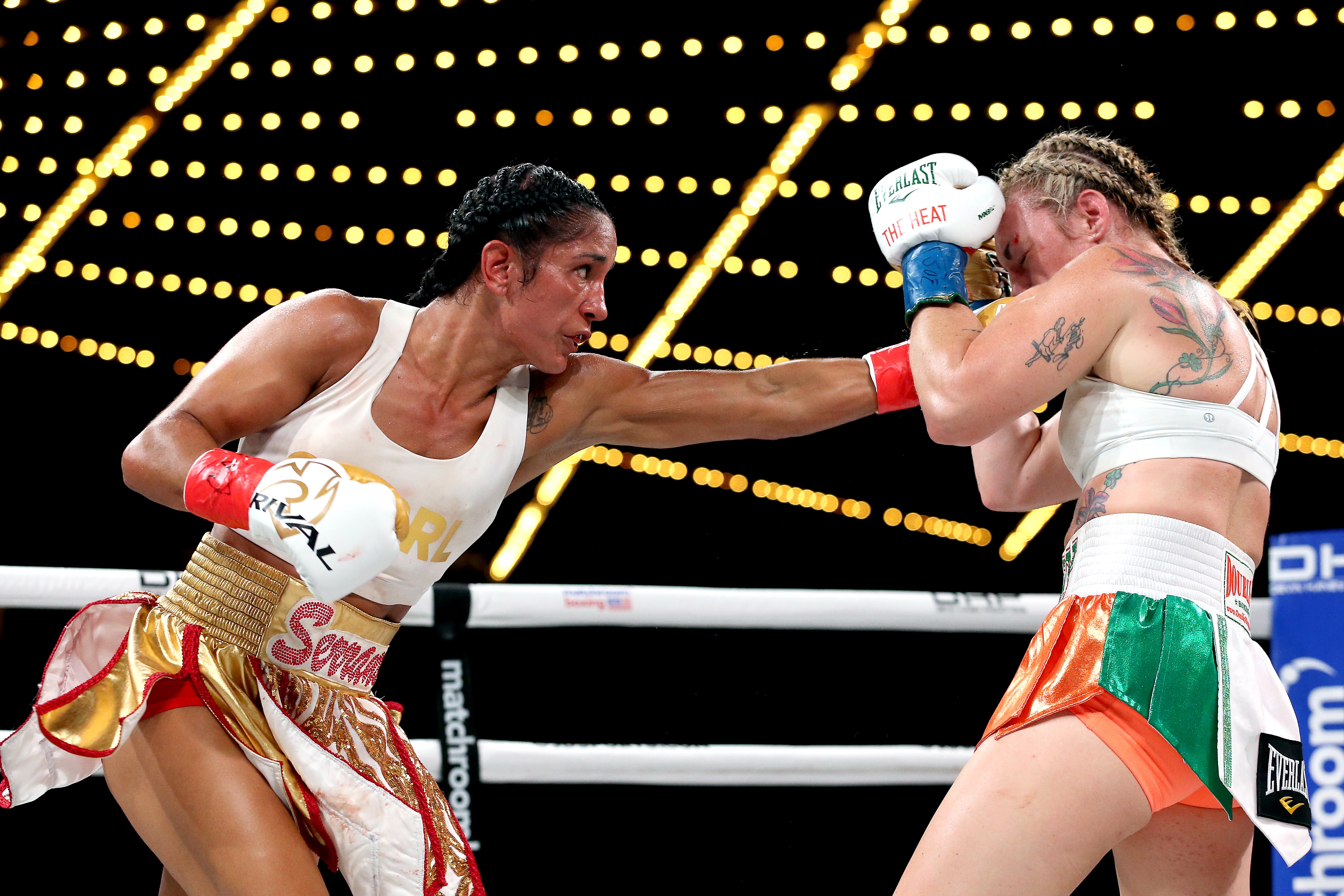 “It was a great performance,” said Serrano. “Heather is as tough as they come and she’s a champion for a reason. She came to fight, but I was the better girl tonight. She’s just not on my level yet. I felt it. Heather is a warrior, she came and stood for 10 rounds. My corner told me to box, catch her coming in, be smart and technical.

“Katie Taylor wants to fight at 140, so we will see what she wants to do. No matter what weight, I’ll win.”

Michael Hunter produced another fine performance to prove he’s a rising force in the Heavyweight division, handing a first career defeat to Sergey Kuzmin to take the Russian’s WBA Intercontinental strap in the process. Hunter (18-1 12 KOs) started brightly and punctuated his early dominance with a left hook knockdown at the start of fifth. The ‘Bounty’ invested heavily in the body of the Russian (15-1 11 KOs) and was rewarded by three cards of 117-110 in his favor. 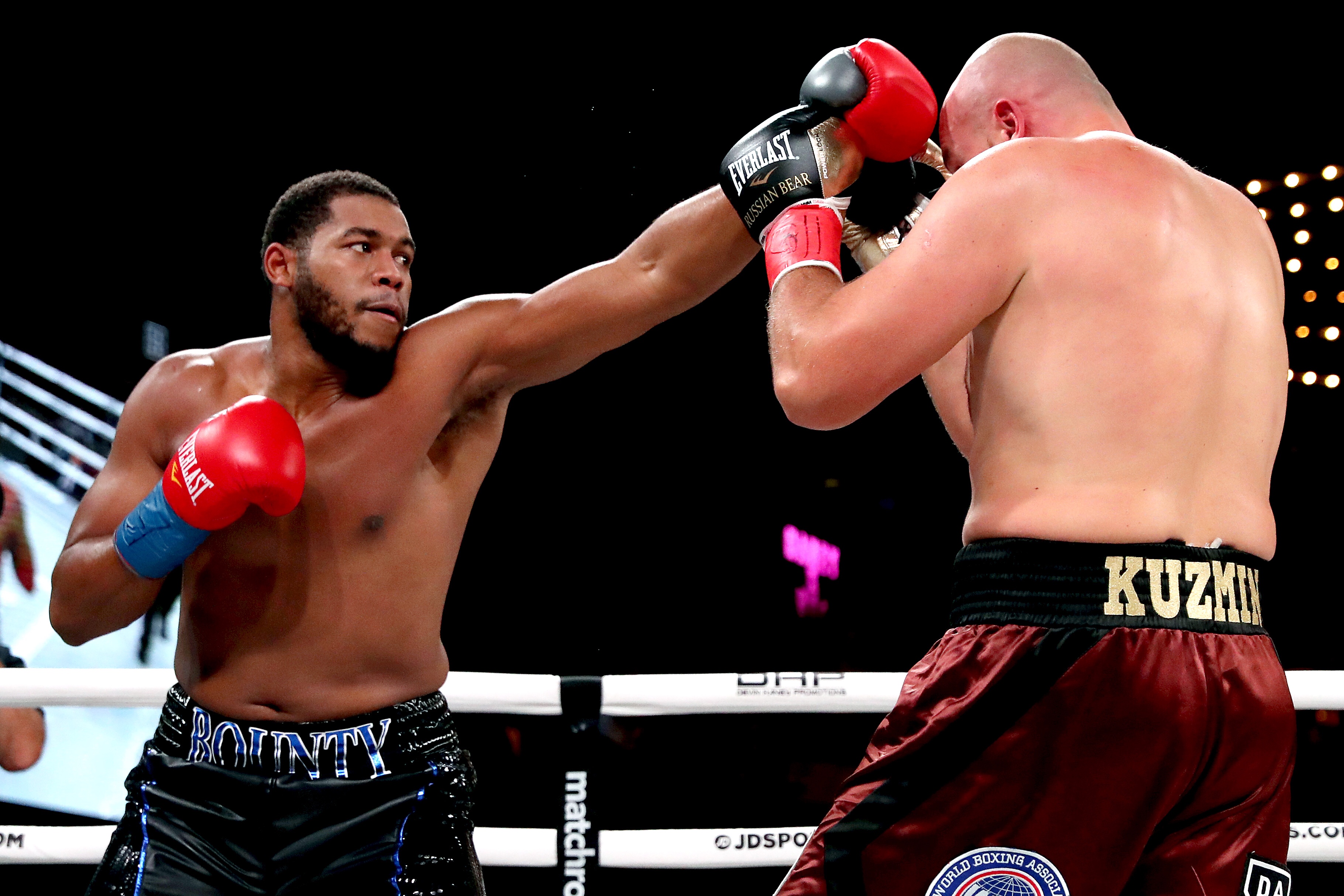 Hunter will now hit the top five with the WBA, and the 31 year old is targeting a showdown with Alexander Povetkin next.

“I wanted to stop the boy, but he’s a tough opponent, I didn’t get him,” said Hunter. “I am pleased with my performance, but I saw things I need to sharpen up on.

“He was a strong dude with a lot of weight. He absorbed it very well. Their guard is tight, I just have to go back to the drawing board and dissect these guys again.

“I want Povetkin. If you see me Povetkin, I’m coming for you.”

Murodjon Akhmadaliev made sure his training camp didn’t go to waste with a fourth-round stoppage win over Wilner Soto. Akhmadaliev (7-0 6 KOs) was set to face unified Super-Bantamweight champion Daniel Roman on the card but injury to the Californian forced the postponement of that bout – and the Uzbek talent looked as spiteful as ever in dispatching the Colombian with his sixth stoppage win from seven victories. 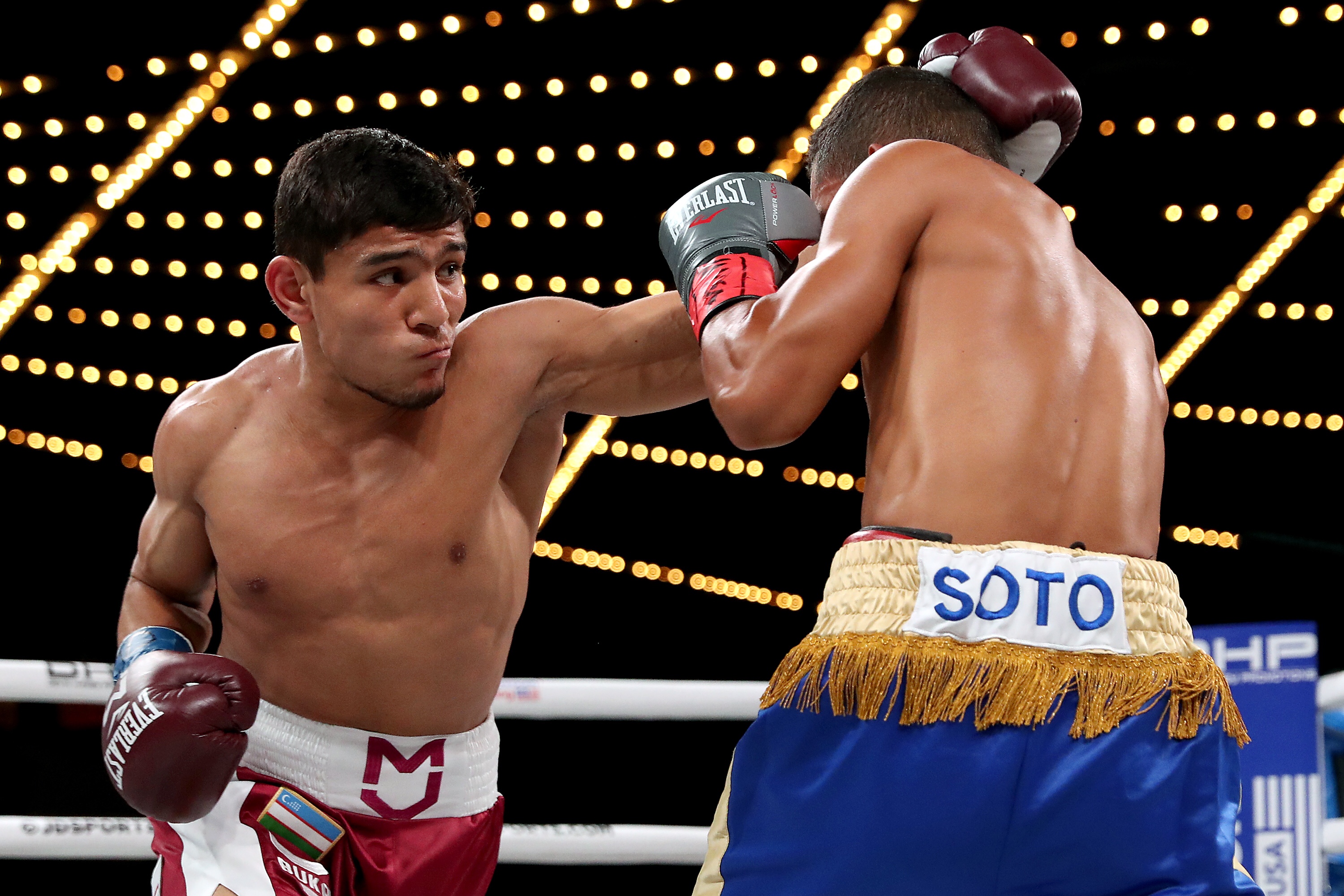 Daniyar Yeleussinov entered the ring for his first ten round fight but turned in a vicious performance to hand Reshard Hicks a first defeat of his pro career in the opening round. Kazakh Olympic gold medal man Yeleussinov (8-0 4 KOs) raced out of the blocks and floored the Texan halfway through the first round and didn’t let Hicks off the hook, with his blistering handspeed proving too much and a second heavy knockdown ending the fight. 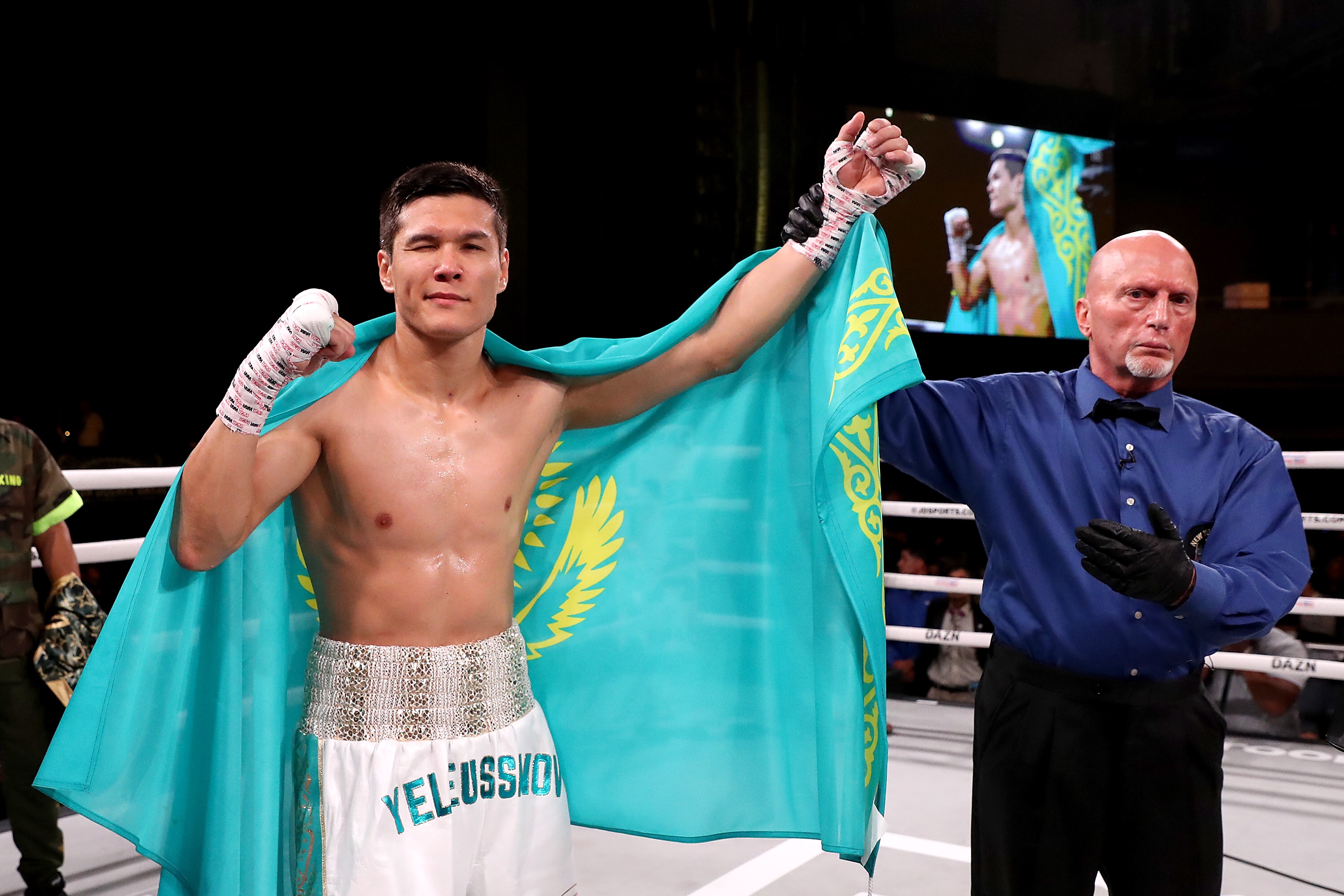 Raymond Ford (4-0 1 KO) made it four-in-four as a pro, going the distance for the third time over four rounds against Rafael Castillo. 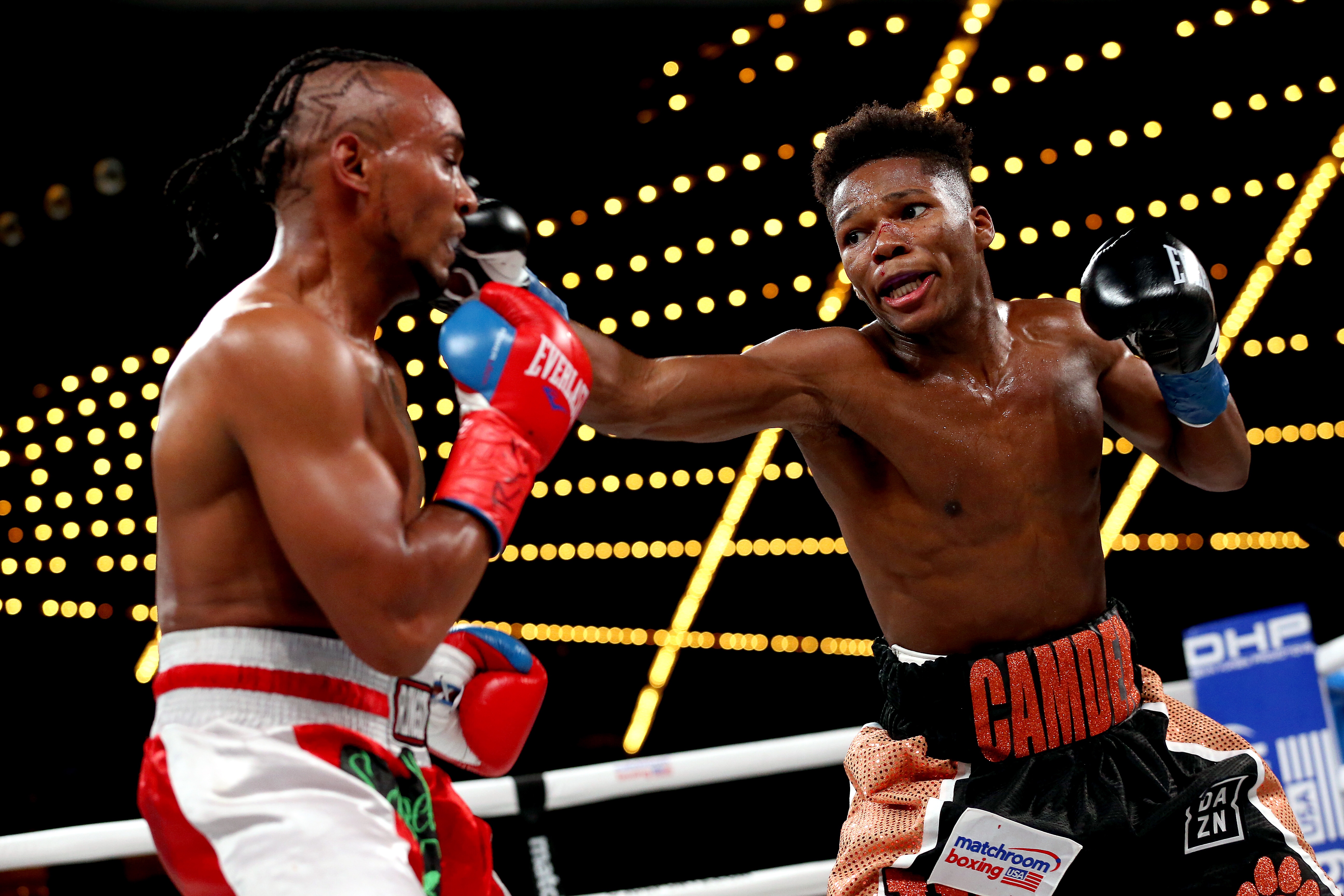 Heavyweight Magomedrasul Majidov had a scare on debut after he was knocked down in second round by Ed Fountain, but that blip lit a fire under the three-time World amateur champion who stopped Fountain in the fourth.

Another debutant on the bill was Christian Bermudez, and the Brooklyn man delivered a devastating left hook KO of Jonathan Conde to thrill his huge support.

Brooklyn’s Wesley Ferrer recorded an important win over Larry Fryers over eight rounds. Ferrer got the nod 79-73 (twice) and 80-72 against Irish-New Yorker Fryers, with Ferrer (14-1-1 7 KOs) landing a second triumph in 2019, having previously been without victory since 2016, and Darren Cunningham (10-0 5 KOs) moved into double figures in the paid ranks with a six-round points win over Jonathan Ramos.