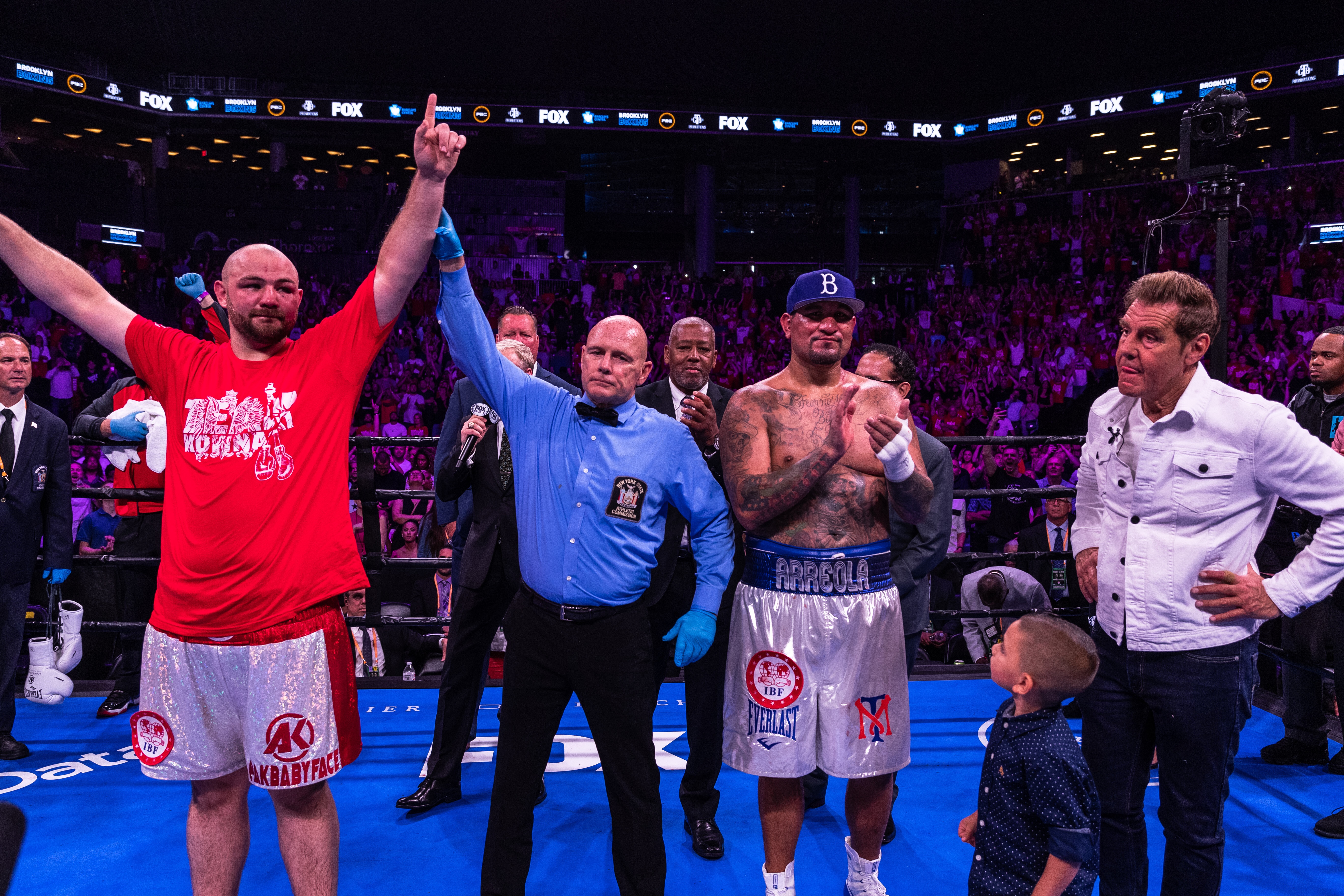 PHOTOS BY: NABEEL AHMAD FOR PREMIER BOXING CHAMPIONS
Kownacki and Arreola set the CompuBox heavyweight record for combined punches landed and thrown in a heavyweight fight. They landed a combined 667 punches, besting the previous record of 650, while throwing 2,172 punches, far surpassing the previous mark of 1,730.
Highlights from the fight can be found HERE, HERE and HERE.
“Chris is an Aztec warrior,” said Kownacki. “He’s a great fighter. I knew it would be a tough fight and I prepared for it. The CompuBox numbers prove it was a great fight.” 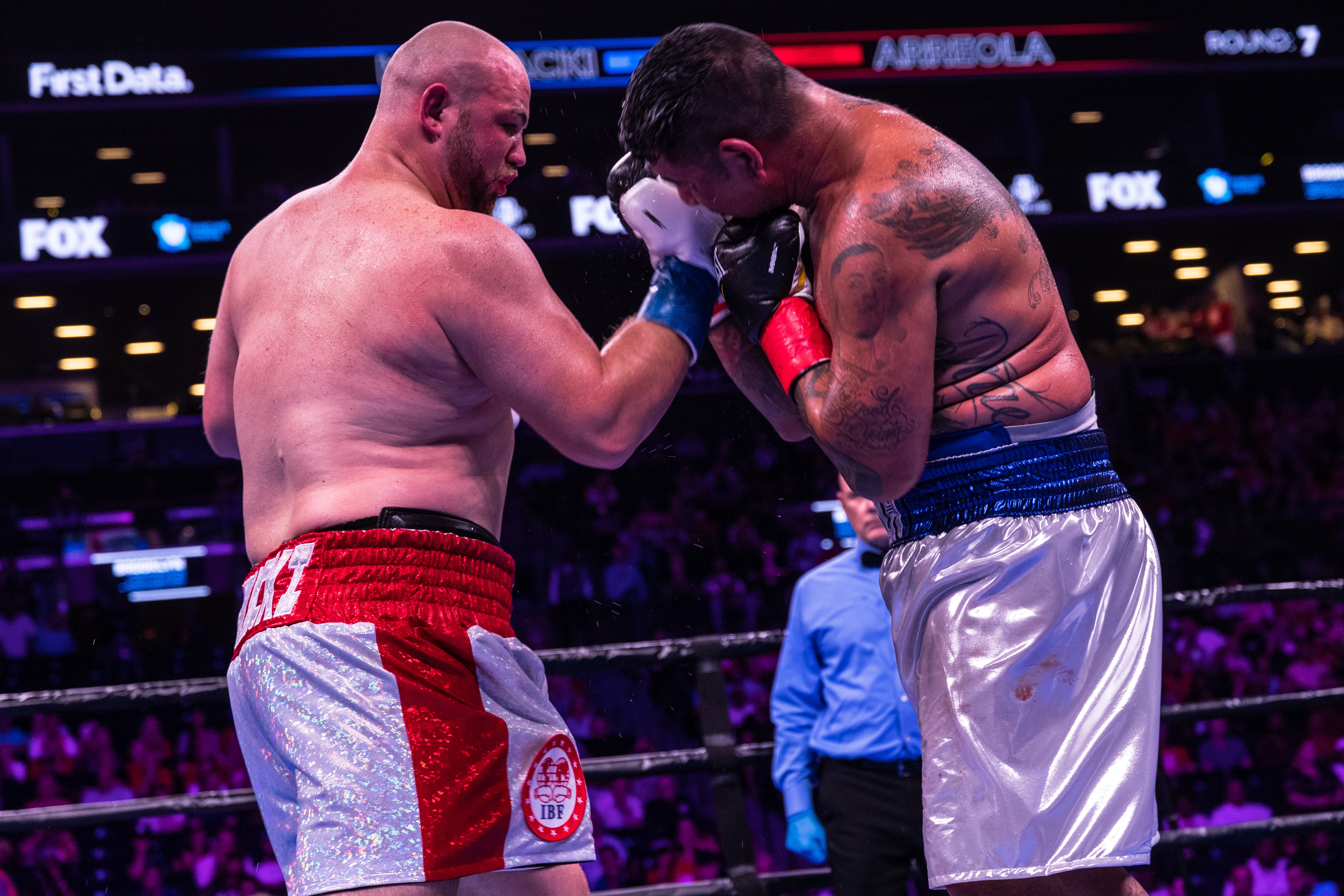 “Adam is relentless,” said Arreola. “He just keeps coming. I know I got him with some good punches and he got me with some good ones. I was more than ready to go all 12, but Adam came in and won the fight.” 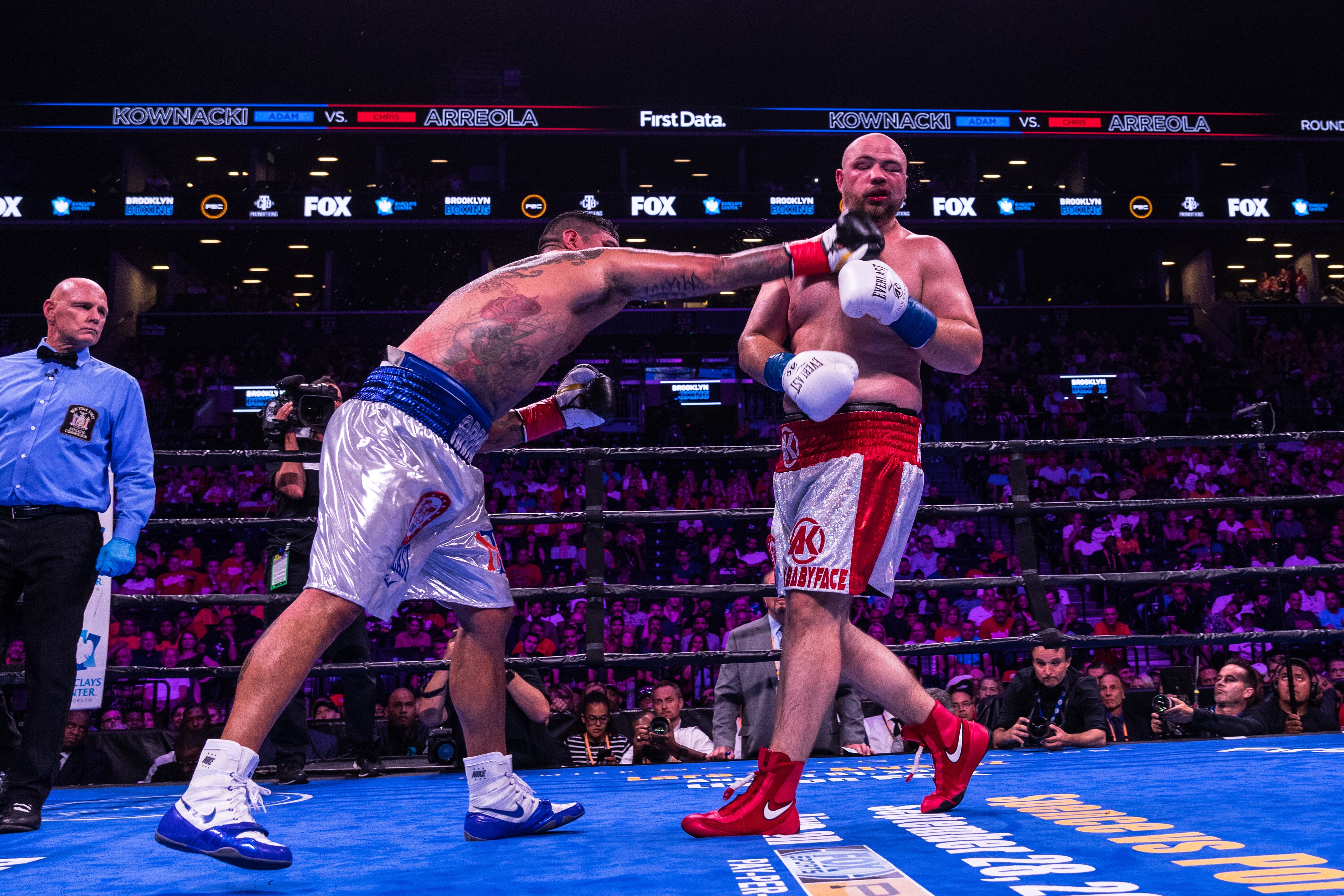 The action began right from the first bell, as Kownacki charged at Arreola and immediately began exchanging as both men threw power punches in bunches. Kownacki worked off of his jab to initiate his offense, while Arreola was effectively able to counter his hard-charging opponent and respond every time he was hit with a combination.
“I thought it was a good close fight but I knew I pulled it out,” said Kownacki. “I landed a lot of shots and that was enough to win. That’s all that matters.”
Kownacki stunned Arreola in the early moments of round two but Arreola quickly responded to slow Kownacki’s momentum. Arreola found more and more success with his overhand right as the fight went, landing the punch numerous times in the fourth and fifth round especially.
Round six was a back and forth affair that featured a big offensive surge from Kownacki early in the round, before an exciting exchange at the end of the round saw both men take heavy punches.
“I tried to follow up when I had him hurt but I was throwing two punches instead of three or four,” said Kownacki. “Props to Arreola because he proved he could still hang. I’m sure the fans would want to see him again.”
The middle rounds saw Arreola pick up a hand injury, but it didn’t appear to slow him down much as his punch output continued to be strong for the second half of the fight. For Kownacki, it was his first time going past 10 rounds as a pro.
After the punches continued to fly through the last bell, the two heavyweights embraced in the ring prior to hearing the judges’ scores. After 12 rounds, all three judges saw the fight in favor of Kownacki, by scores of 117-11 twice and 118-110.
“Retirement is something I need to talk to my family and team about,” said Arreola. “I gave it my all this fight. I let it all hang out. After breaking my hand, I kept fighting because I believed I could win.”
“I just have to keep training hard, getting better and sharpening my skills,” said Kownacki. “We’ll see what the future holds. Hopefully next year I’ll get the title shot.” 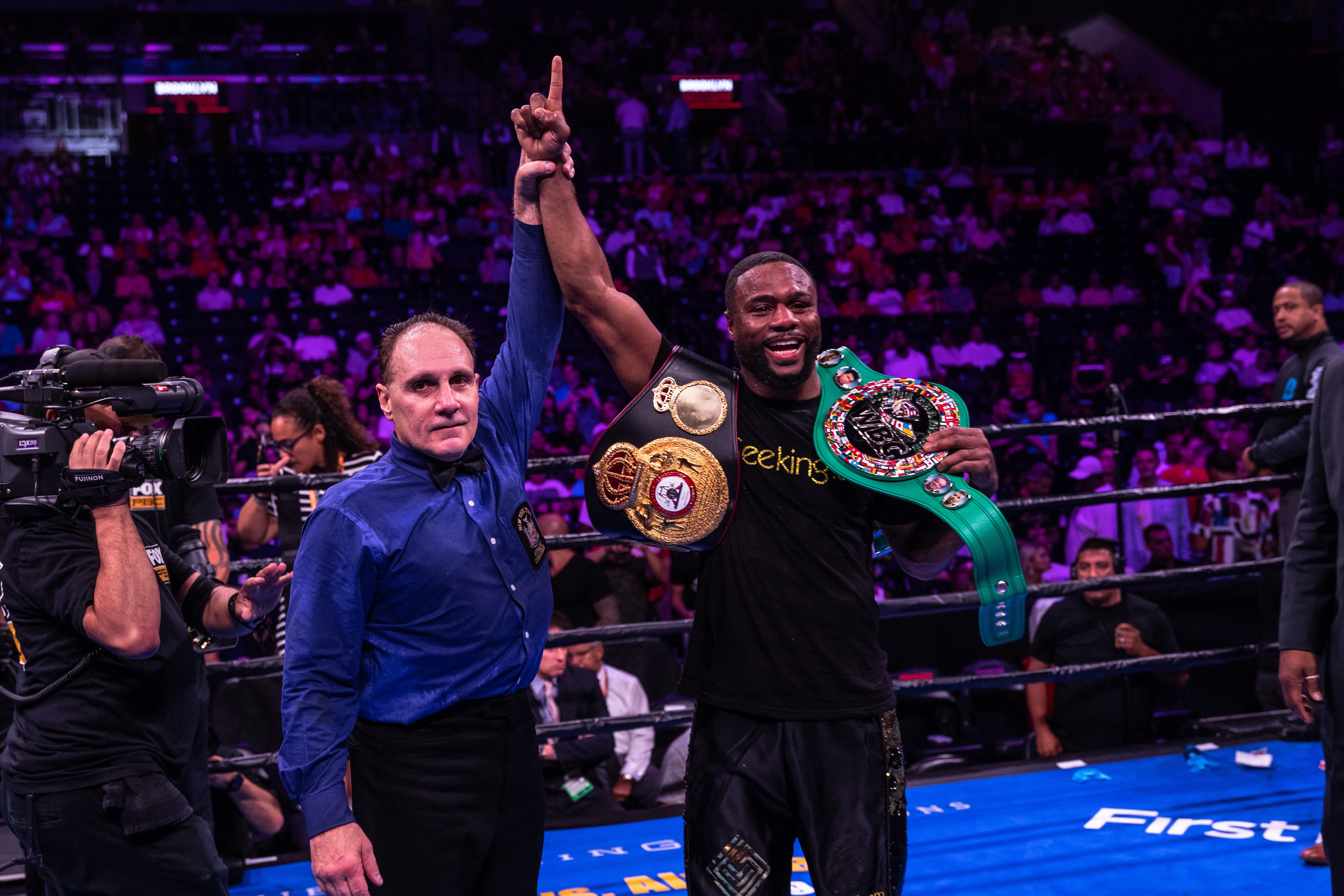 The co-main event saw former world champion Jean Pascal (34-6-1, 20 KOs) earn a narrow technical decision over previously unbeaten Marcus Browne (23-1, 16 KOs) to capture the WBA interim light heavyweight title after an accidental headbutt ended the fight in round eight.
“Boxing is boxing,” said Pascal. “We clashed heads, but at the end of the day, I was winning the round. I dropped him three times. It was a close fight, but I believe I was winning.” 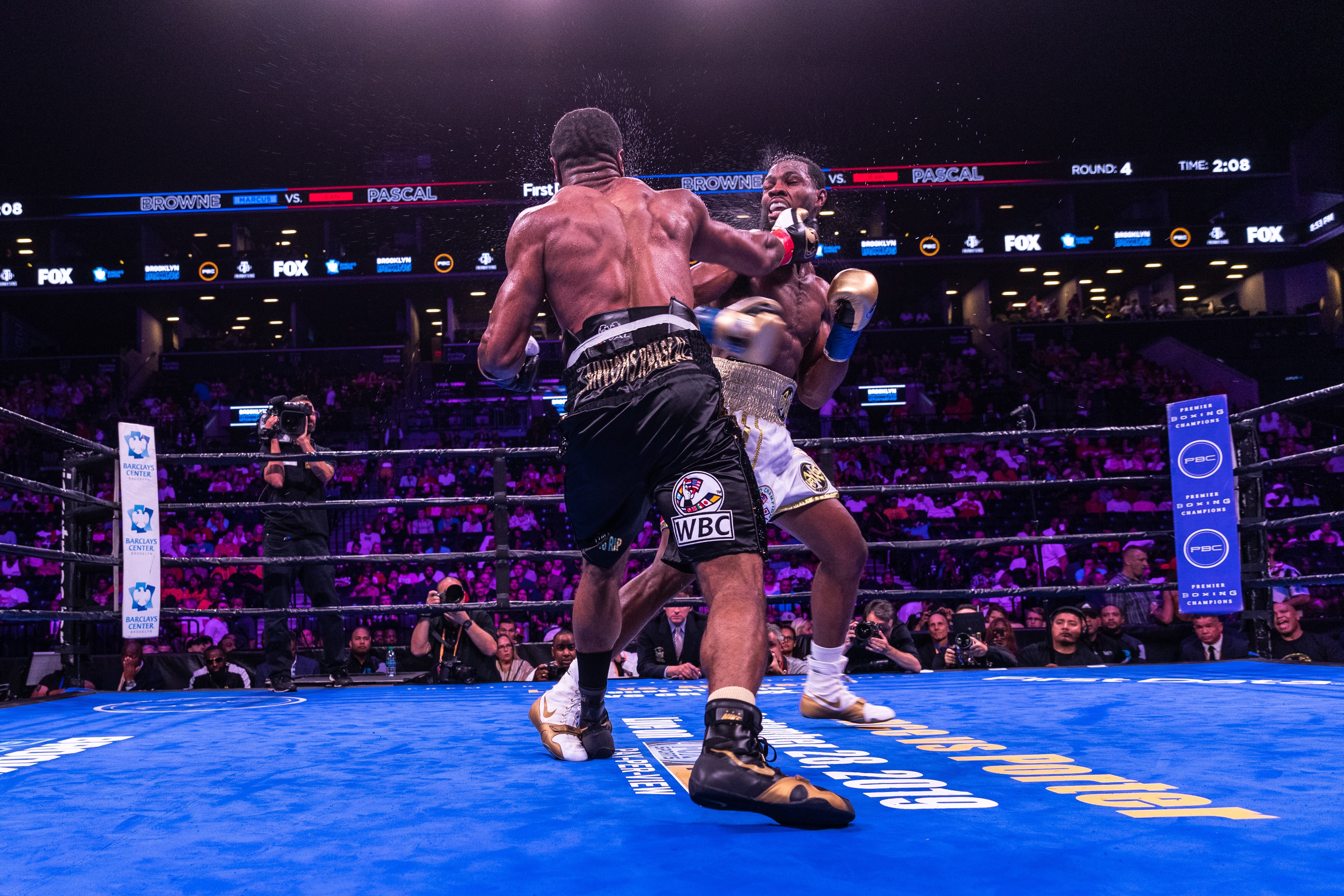 Browne appeared to be in control early, using his jab effectively and finishing his combos with power punches. Throughout the fight, Browne would land 52% of his power punches according to CompuBox.
In round four, Pascal broke through landing a perfect right hand that connected with Browne as he threw his own right hook. Browne hit the canvas for the third time in his career, but was able to make it through the round. 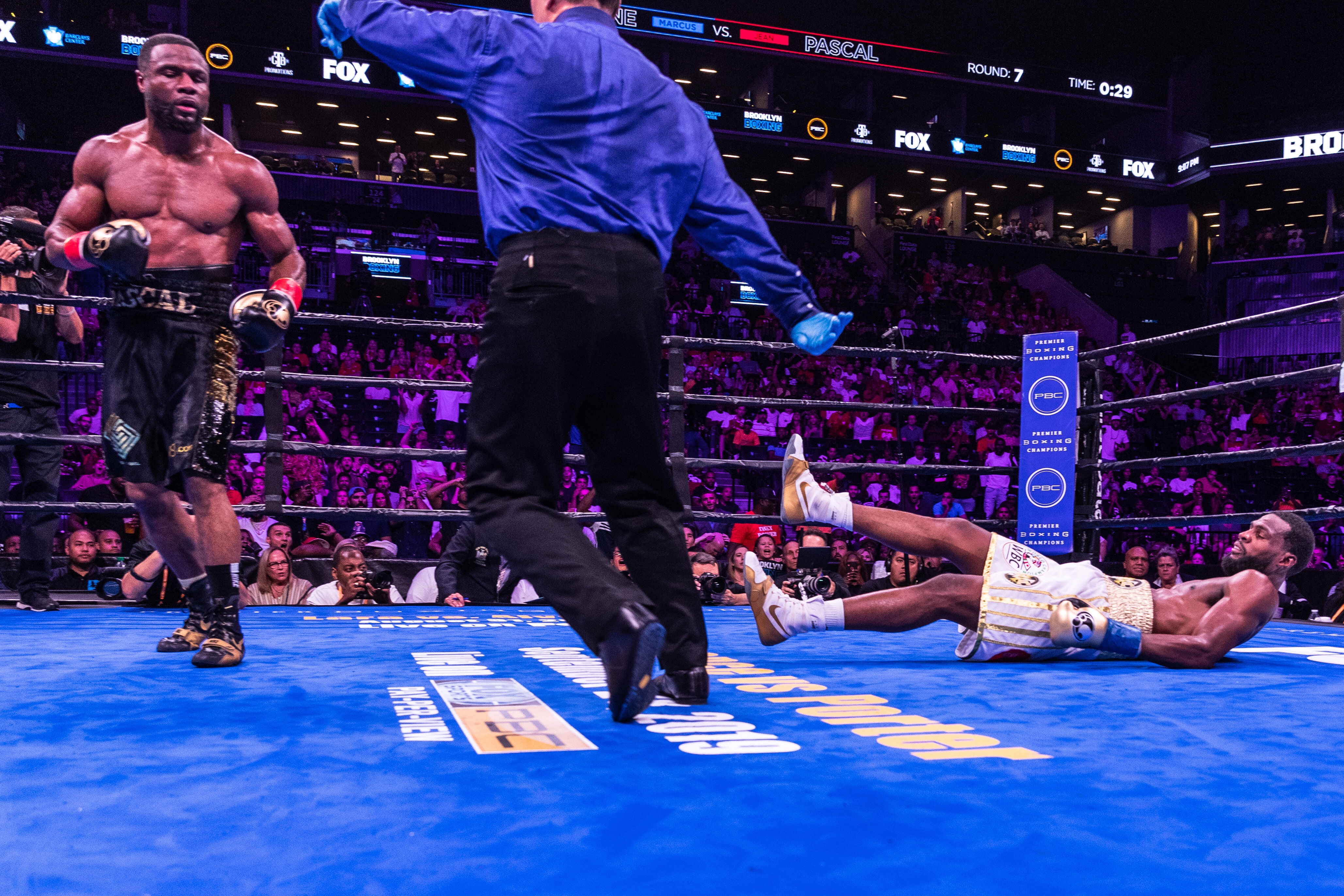 Watch Pascal score the knockdown HERE
Browne looked to have regained control of the fight until late in round seven when Pascal again connected on a powerful right hook that caught Browne during an exchange. Pascal jumped on Browne after he got to his feet and knocked him down a third time right before the bell ended round seven.
Montreal’s Pascal was looking to finish Browne in round eight, while Browne looked to effectively navigate the ring while recovering from the previous round. It was midway through the round that Pascal hit Browne with an accidental headbutt on the ropes that opened a cut over Browne’s left eye. 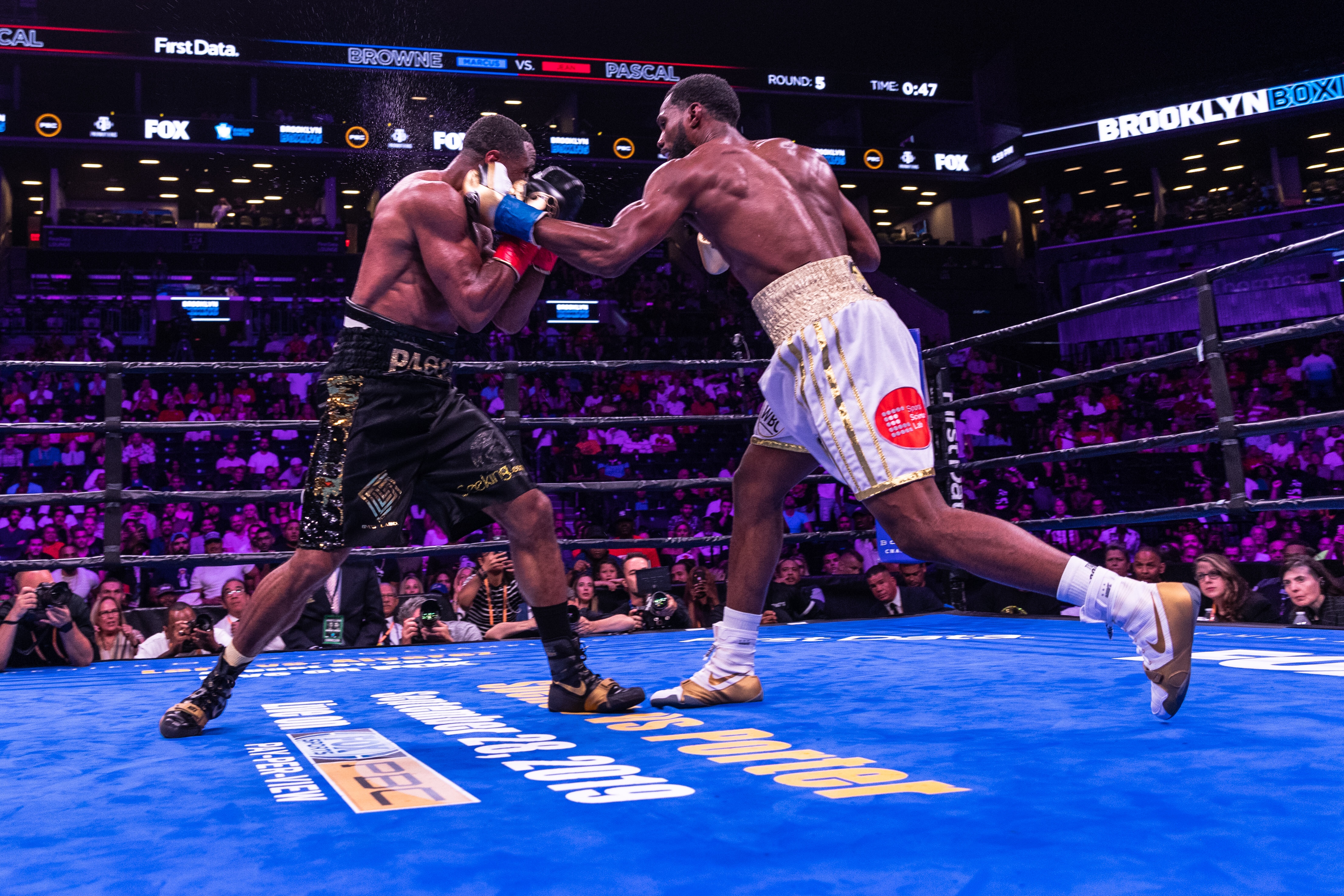 Watch the headbutt HERE
Referee Gary Rosato halted the bout 1:49 into the round, on the advice of the ringside physician, meaning the fight went to the scorecards. By winning the shortened eighth round on all three judges’ cards, Pascal won the fight by the score of 75-74 three times.
“I could hear my daughter ringside and that was motivation for me,” said Pascal. “She was yelling my name all night long. I’m going to go home and talk to my team to see what is next. Canada has Drake, the NBA Champions and now I’m bringing the belt home.”
Browne was unavailable for post fight comments as he was taken to NYU Lutheran Medical Center due to the cut.
The opening bout on FOX saw Wale Omotoso (28-4, 22 KOs) drop Curtis Stevens (30-7, 22 KOs) three times on his way to a third round stoppage victory in their super welterweight clash. 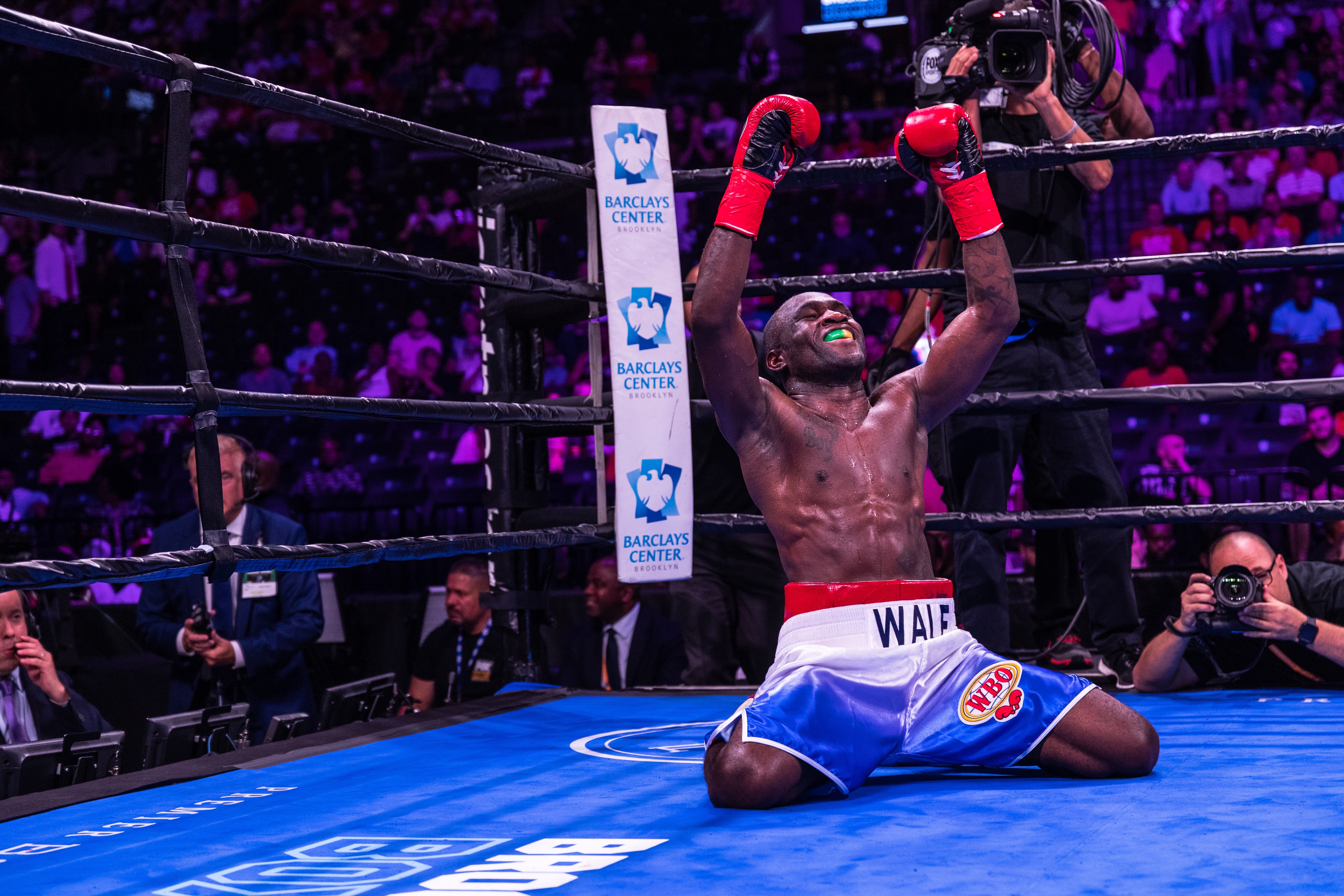 For Stevens it was his first fight at 154-pounds, and he was tested at the new weight from the outset. Omotoso began moving and jabbing around the ring as Stevens stalked him and tried to throw power punches to slow his movement. Late in the first round, Omotoso broke through with a right hand to the side of Stevens’ head that dropped him in the middle of the ring.
“My coach told me to keep my hands up, be patient, box him and jab,” said Omotoso. “He told me I shouldn’t push it and that when the opening was there, I’d take it. That’s exactly what happened.” 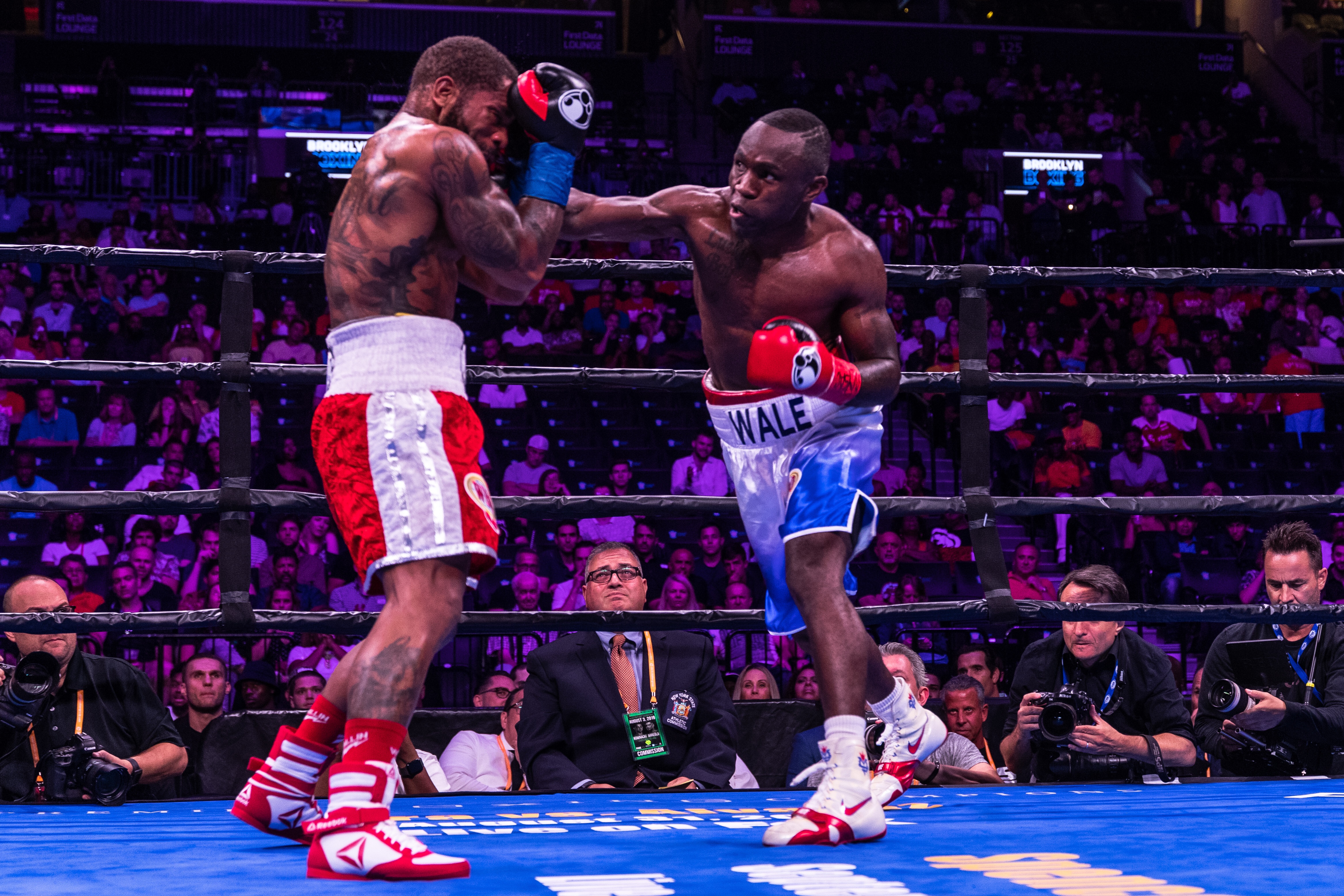 “He hit me with an overhand right in the first round that knocked my equilibrium,” said Stevens. “But that didn’t really affect me too much. I wasn’t stepping enough into my punches, I was reaching. I got caught when I was reaching.”
In round two Omotoso landed a perfect jab on Stevens, as his opponent was throwing a left hook, that sent him down for the second time in the fight. Stevens again made it through the round, and began the next frame trapping Omotoso in the corner and connecting on power punches. 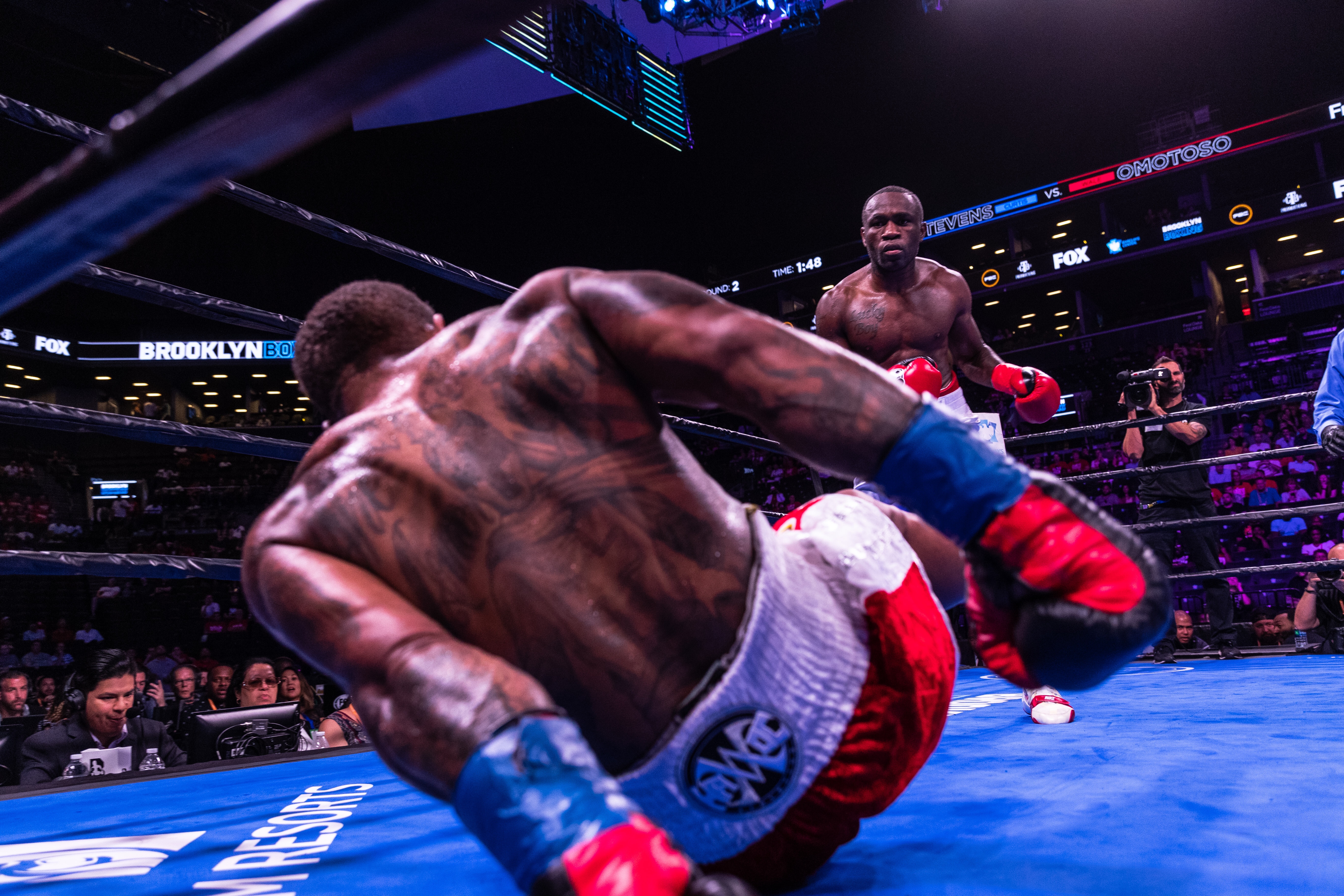 “I was just letting my hands go,” said Omotoso. “On the second knockdown my confidence grew. I was glad to get the victory by knockout.”
While Stevens was able to own the early moments of the third round, Omotoso hit him with a three punch combo that featured left hook, left uppercut and then straight right hand that put Stevens down for the third time. Stevens got to his feet but referee Johnny Callas halted the bout at 1:28 of the third round. 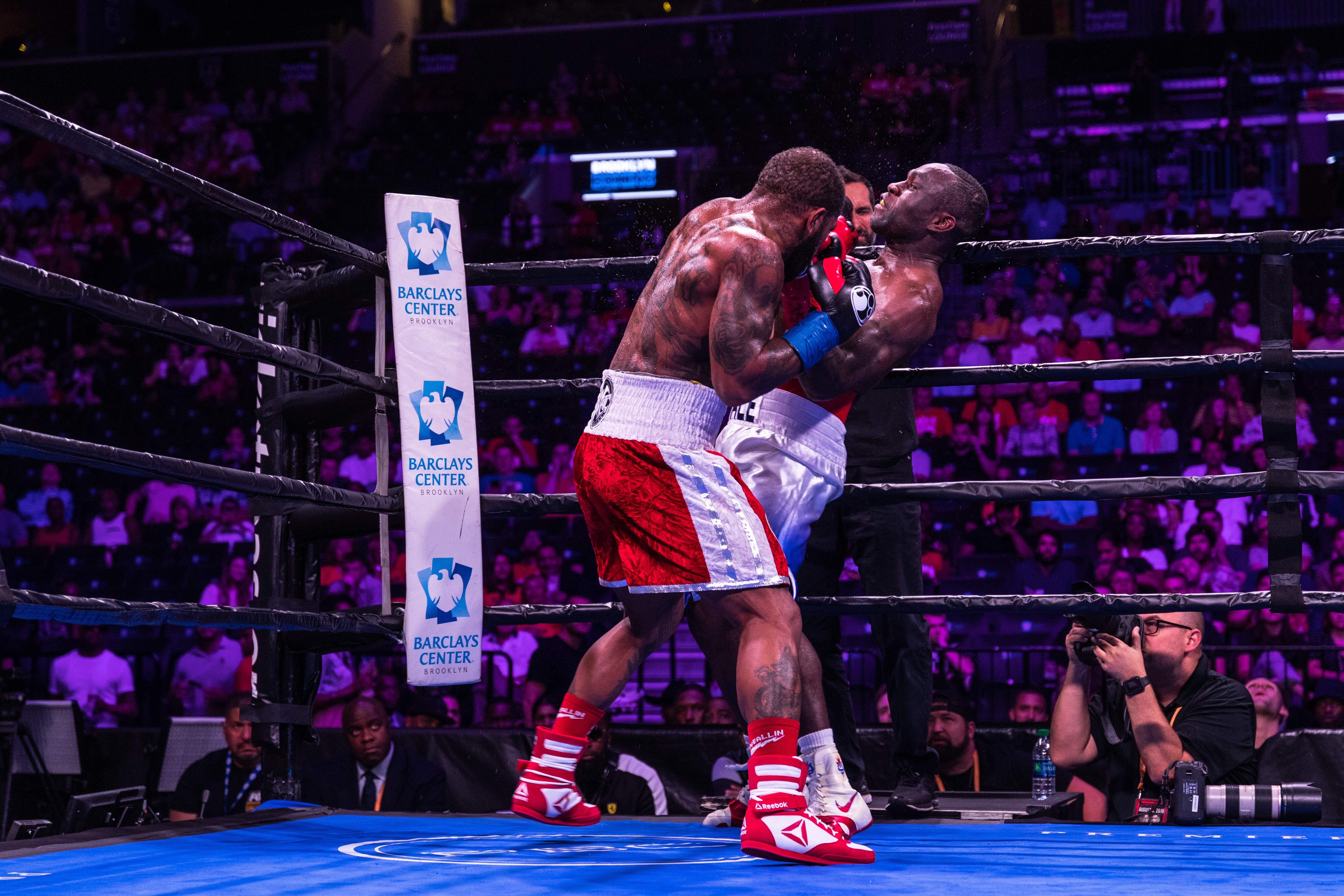 “I was okay but the referee has to do his job,” said Stevens. “I was down three times so I know he was looking out for my best interests.”
“I didn’t expect it to go exactly like that,” said Omotoso. “I was just listening to my coach. The second knockdown was actually with my jab. I have to talk to my team about what’s next. I’m thankful for this opportunity. I’m so happy to have this win. Give me anybody next, I’m ready.”
Watch Omotoso’s TKO over Curtis Stevens HERE