BROOKLYN (August 1, 2019) – Unbeaten Polish star Adam Kownacki and former title challenger Chris “The Nightmare” Arreola went face to face at Thursday’s final press conference, two days before they meet in a heavyweight showdown headlining FOX PBC Fight Night this Saturday live on FOX and FOX Deportes from Barclays Center, the home of BROOKLYN BOXING™.
The press conference also featured fighters competing in action beginning at 8 p.m. ET/5 p.m. PT as unbeaten WBA interim light heavyweight champion “Sir” Marcus Browne and former champion Jean Pascal, plus Brooklyn’s Curtis Stevens and Wale Omotoso, all faced-off ahead of their respective matchups Saturday night.
Tickets for the event, which is promoted by TGB Promotions, are on sale now and can be purchased at Ticketmaster.com. Tickets can also be purchased at the American Express Box Office at Barclays Center.
The fighters were joined on stage by former lineal heavyweight champion Michael Spinks. Here is what the fighters had to say Thursday from the Brooklyn Marriott:
ADAM KOWNACKI
“This is one of my dreams coming true. Since the amateurs I’ve wanted to fight at Barclays Center and on Saturday night I’m the main event. I couldn’t be more excited 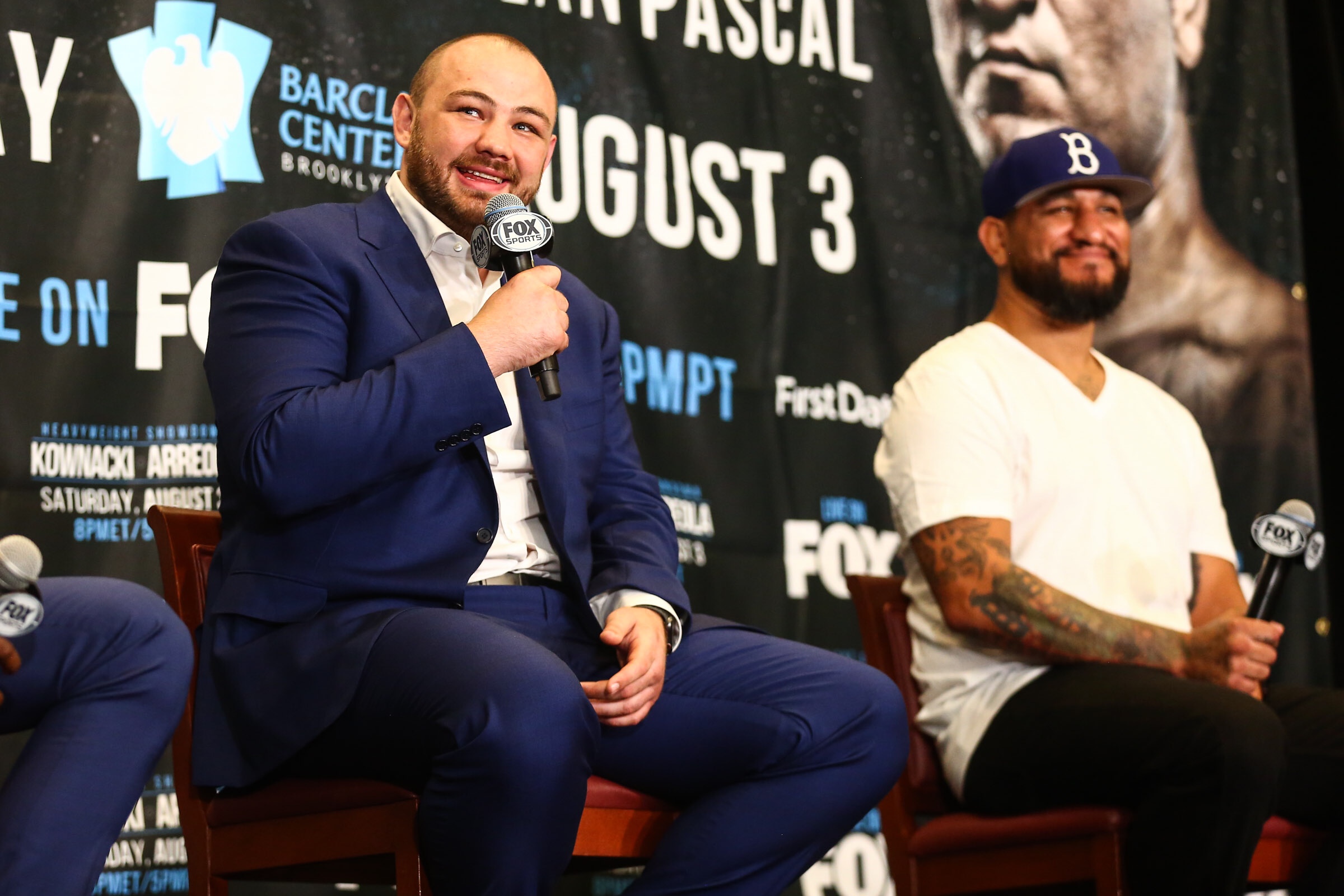 PHOTO BY: STEPHANIE TRAPP FOR TGB PROMOTIONS
“I’ve been pushed hard in training camp and I can’t wait to show everyone all of my work on Saturday. The key is going to be jabbing in and throwing my punches in bunches like I always do.
“This is a new experience for me being the headliner, but in the ring it doesn’t matter. It’s just two guys fighting each other. We both love to fight. I can’t wait to get it over with and punch him in the face.
“Chris Arreola is a warrior. You always know that when Chris fights, it’s a good fight. But I’m going to test how much he has left in the gas tank. Chris has been in there with three champions and when I take care of business on Saturday, I’ll be one step closer to being world champion.
“It’s truly a great feeling to have all this support from my fans here. These fans are trusting me to bring the title back to Brooklyn and to Poland.
“Barclays Center has been my boxing home. I can’t wait to get in the ring. This is a tough fight and I have to make sure I send the fans home happy.
“This definitely has Fight of the Year written all over it. Neither of us are afraid to let our hands go and no matter what happens, the fans are going to be winners on Saturday.”
CHRIS ARREOLA
“I understand that Adam is the favorite because he’s undefeated and fighting in his hometown. At the end of the day, none of that matters to me. I’m going to give it my all for this fight. 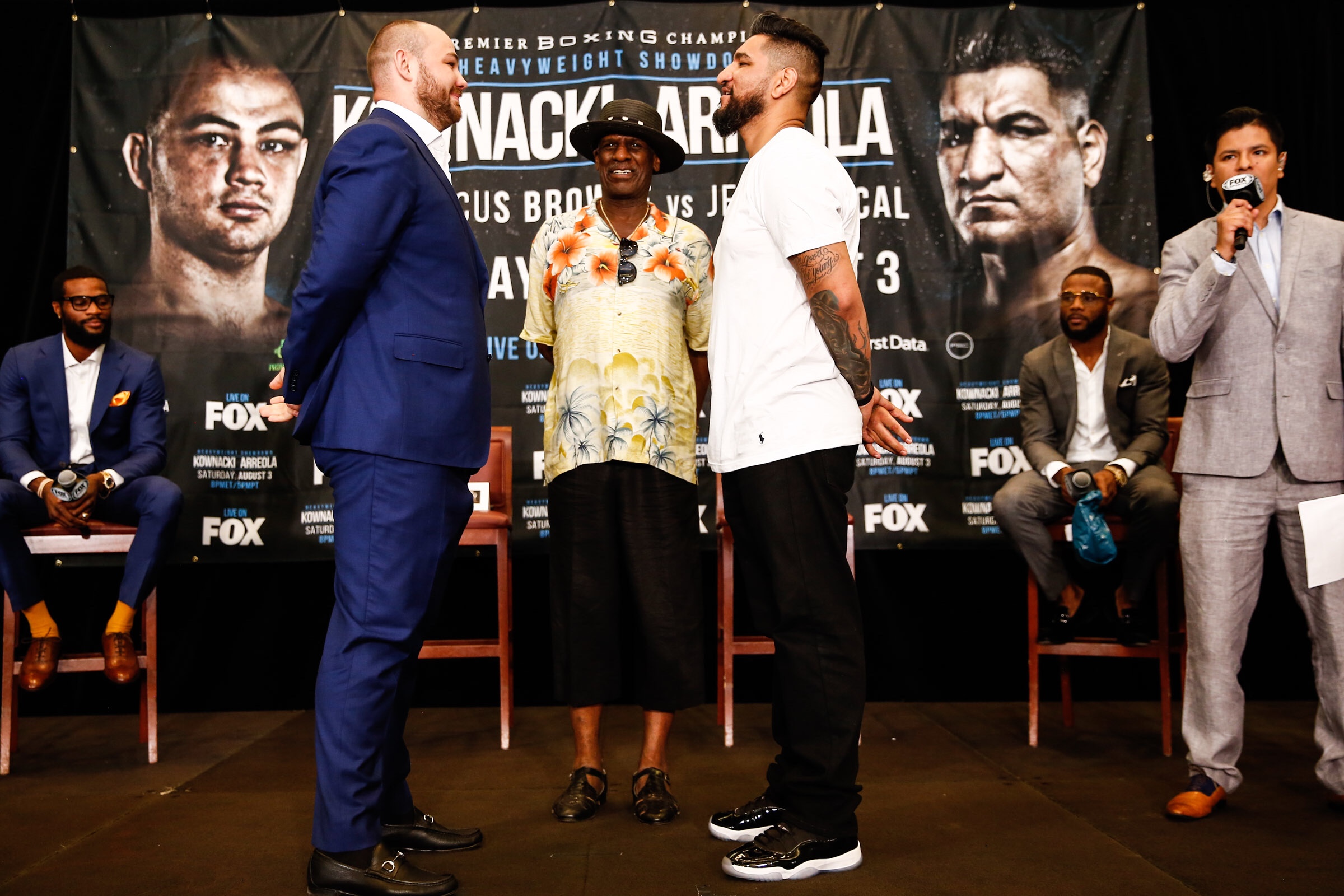 “I’m carefree right now. I have no stress. If I lose, I’m okay with walking way. But I’m not here to do that. I’m here to win.
“I know I have a tough opponent in front of me. I have my work cut out for me. But ‘The Nightmare’ is going to keep going.
“I went to Joe Goossen as my trainer because I knew it was time to make a change. I have to make this last run count. This is the best team I could imagine. Joe makes you work on your mistakes. I believe the winner of this fight is whoever takes advantage of the first mistake.
“I respect everybody outside of the ring, but once we’re in the ring, I’m not friends with anyone. We’ll shake hands after the final bell, but I’m here to put on a show. It’s lights, camera, action and time to shine.
“He’s a volume puncher. He just keeps coming and he’s smiling at you the whole time. At the end of the day, I’m going to put a frown on his face Saturday.
“My prediction is that the fans are going to get their money’s worth. You better record this one, because you’re going to watch it again and again. I’m going to come out with my hand raised.”
MARCUS BROWNE
“Being in training in Colorado really lets me get attuned to my game plan. It’s just waking up every day and working with that same mentality where I’m focused on nothing but the fight. It’s all about going in there and getting that win. 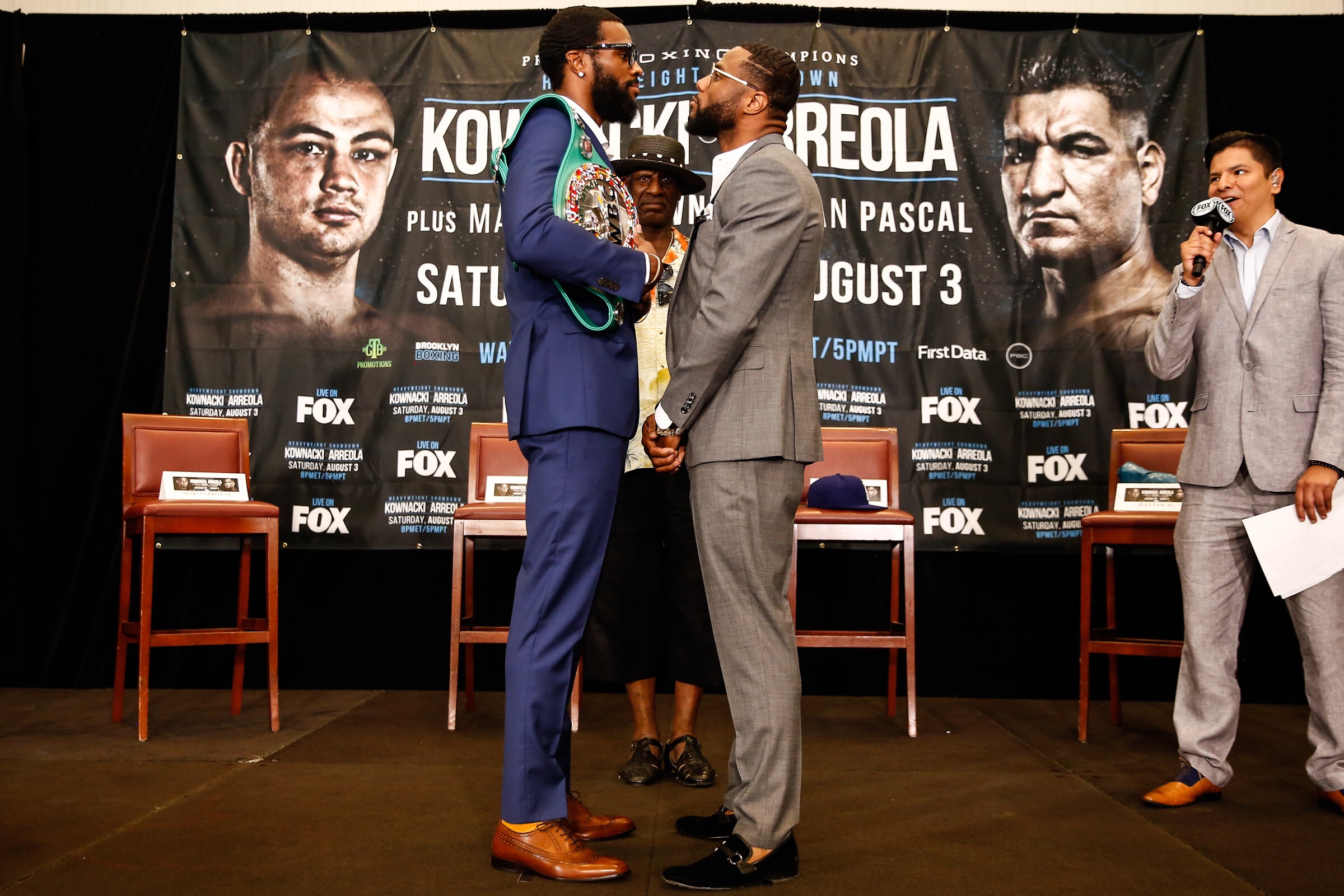 “I’m going to punish Pascal on Saturday. If the knockout is how he wants to go, I’ll be ready. I promise I’m going to beat him for 12 rounds.
“It feels great to be here defending my belt. I’ll be in a better position after this fight. I’m going to make a statement in this fight and put Pascal in his place.
“Pascal is a guy who doesn’t come to lay down, he comes to beat you. That’s what the sport is about. You have to fight guys of that stature if you’re not fighting champions.
“A win on Saturday puts me in contention to fight for a world title next. That’s my focus, but before that, it’s about Jean Pascal and taking care of him the right way.
“This is a great card for New York with me, Adam and Curtis all representing our home city. It’s great for us to be in this position together.”
JEAN PASCAL
“Marcus has been saying that he’s going to go in there and try to knock me out, but I’m no amateur. I know what his game plan is going to be. He’s going to run around the ring and try to hold. We all know he’s the best at running like a chicken. 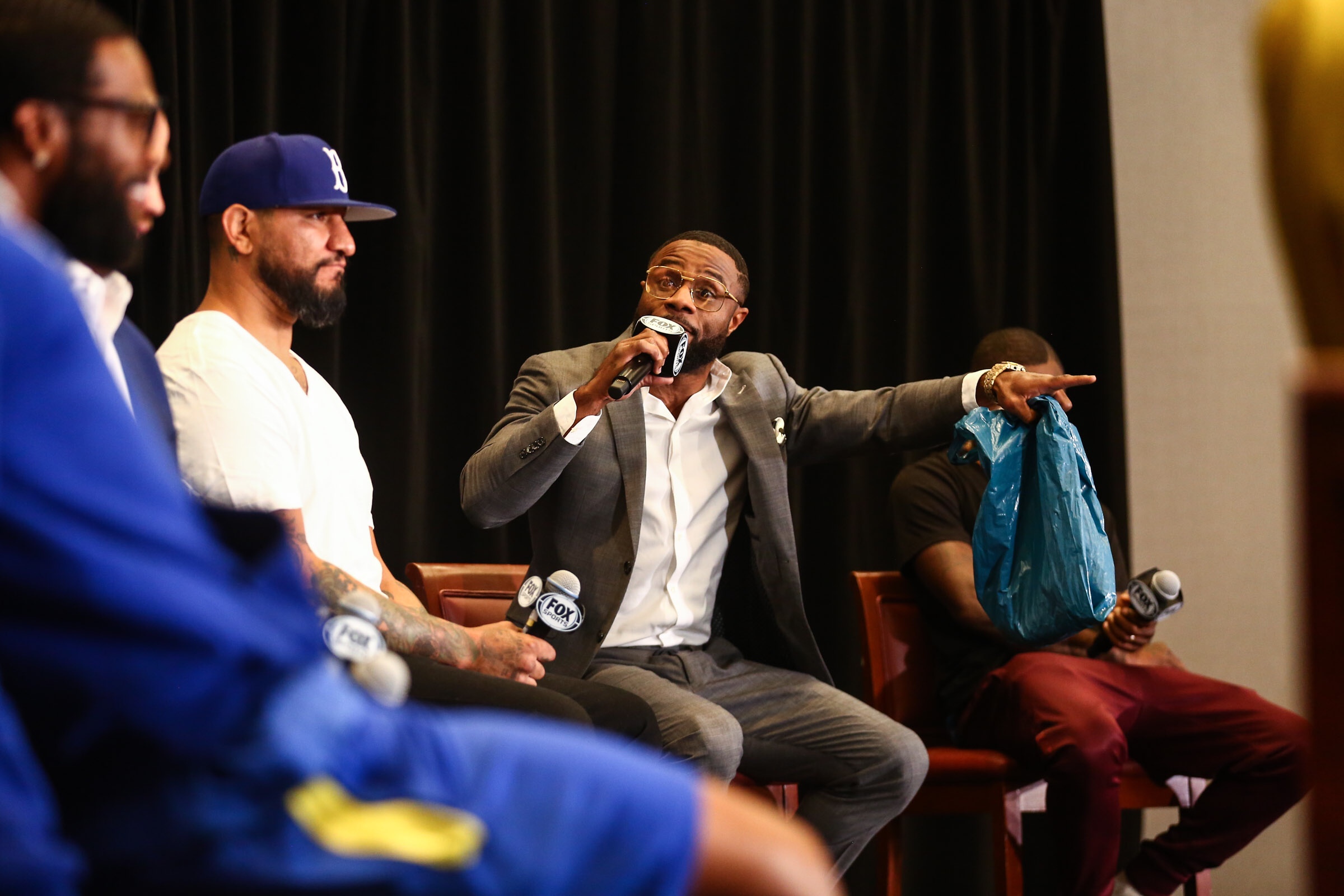 “When I was Marcus’ age, I was already a world champion. He was watching me on TV when he was at the Olympics.
“How is he going to knock me out? I think without the cut that Badou Jack had in their fight, he would have knocked Marcus out.
“I’m ready. I’m a solid fighter. I’ve fought the best, so I don’t think Marcus will be able to knock me out.
“I’m too good all-around for Marcus. This is my chance to show that I still have a lot of gas left in the tank. I’m still good enough to fight at the very top level of the sport.”
CURTIS STEVENS
“This is my first time fighting at Barclays Center, and I’m going to give the fans a taste of what they’ve been missing. 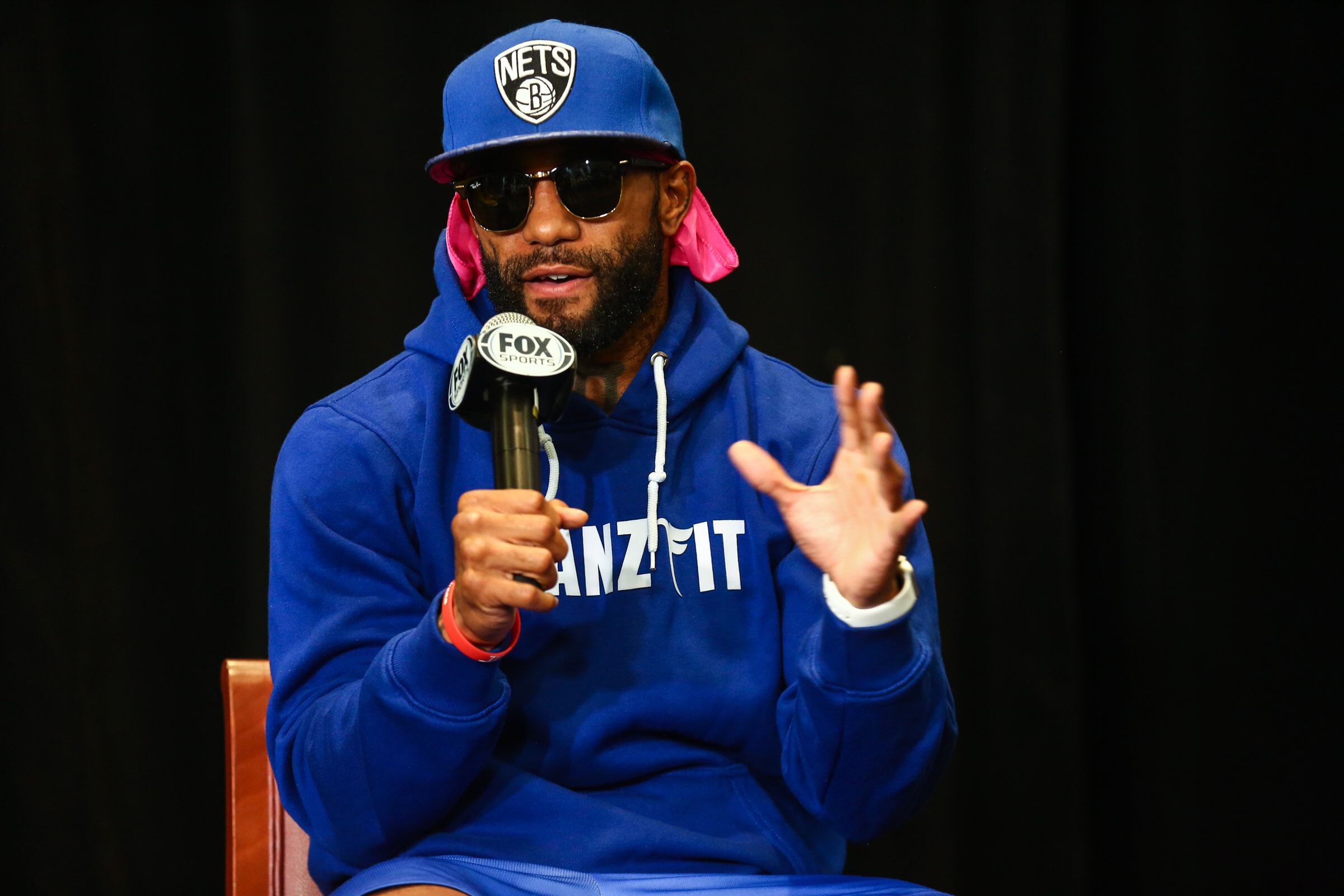 “I decided that I’d go down to 154-pounds because my camp has a lot of the top 160-pound fighters so we were getting in each other’s way. There are a lot of opportunities for me in this weight class as well.
“No matter what has happened in my career, I have always come back. I’m mentally always ready to bounce back. I’ve had layoffs in my career, but I know that I’m going to get where I need to be.
“Nobody calls me out because they know I can punch. I’m too risky for the top fighters because they know there’s a chance they get knocked out.
“It’s incredible to have this opportunity to fight at Barclays Center for the first time. It’s going to be a good time for me and all the fans.”
WALE OMOTOSO
“I’m not worried about Stevens being at a new weight. I don’t think it’s going to affect him that much. On Saturday, we’re both going to do our best to get the win. 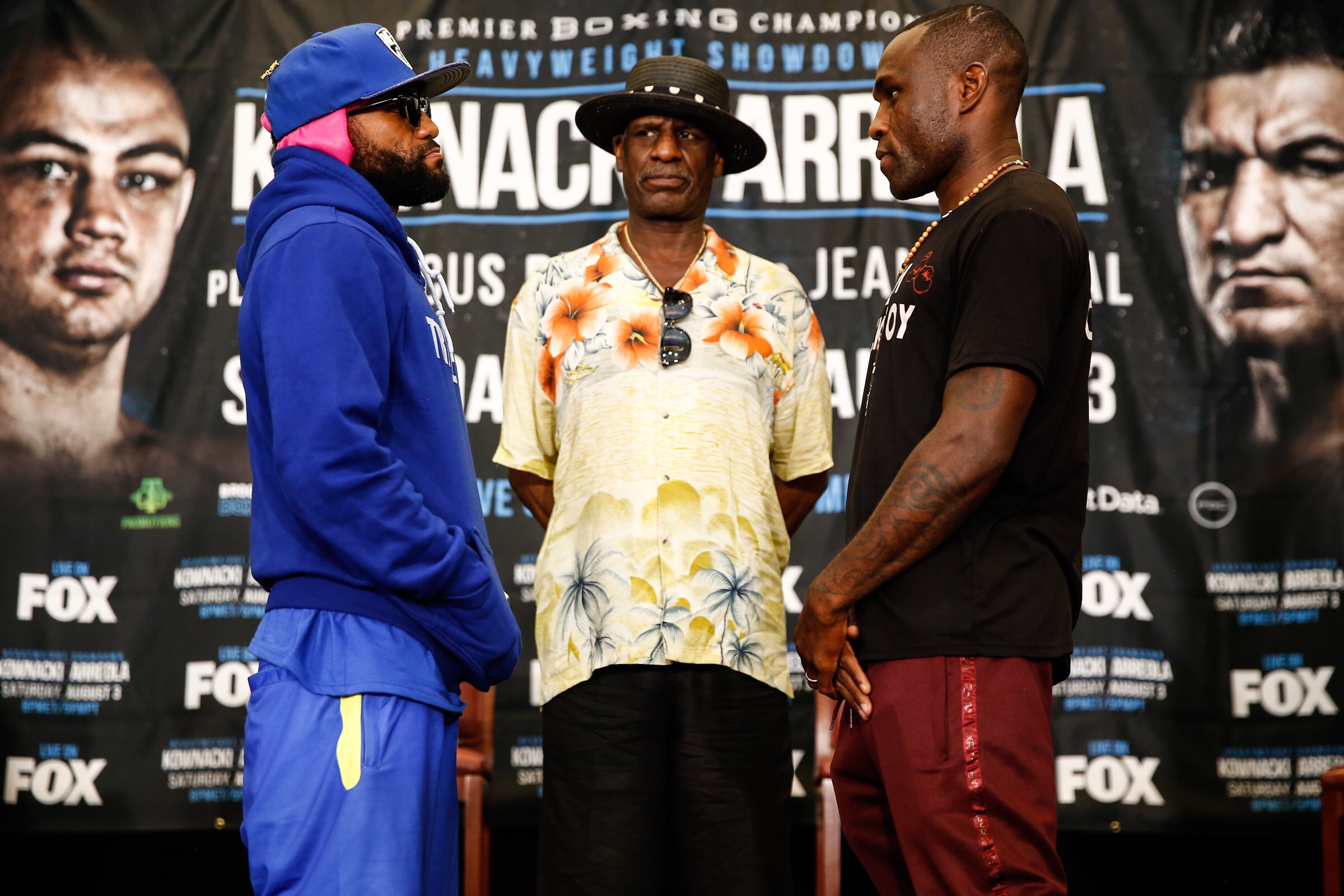 “He’s a big puncher who brawls. But I’m a big puncher too. He’s been there and fought everybody, but I’m going to show the world what I can do.
“I think this is going to be a toe-to-toe fight. There might be some feeling out, but as the fight goes on and we get into the middle rounds, it’s going to be fought in the middle of the ring.
“I’ve trained well for this fight and had sparring with lots of different fighters. The different styles that I’ve seen throughout camp will have me prepared for anything Stevens shows me on Saturday night.”