GERVONTA DAVIS DEFENDS HIS WBA 130LB TITLE WITH A 2nd ROUND T.K.O.

BALTIMORE – July 27, 2019 – Gervonta Davis returned to Baltimore in empathic fashion, defending his WBA Super Featherweight World Championship with a second round technical knockout of mandatory challenger Ricardo Núñez Saturday on SHOWTIME from a sold-out Royal Farms Arena.
Fighting for the first time at home as a world champion, and in the first world title fight in Baltimore in nearly 50 years, Davis again proved why he’s one of boxing’s brightest young stars.  After a first round where he peppered Núñez to the body, the youngest reigning America world champion landed a series of brutal left hooks flush to Núñez’s face that sent the challenger stumbling into the ropes in the second.  With Núñez (21-3, 19 KOs) leaning against the ropes and unable to defend himself, referee Harvey Dock stepped in to stop the contest at 1:33.   VIDEO: https://s.sho.com/2JZwFEi
The resounding knockout was Davis’ 21st knockout in 22 professional fights, and perhaps his sweetest.  It occurred in front of 14,686 fans in the first hometown title defense for a Baltimore native in 79 years. 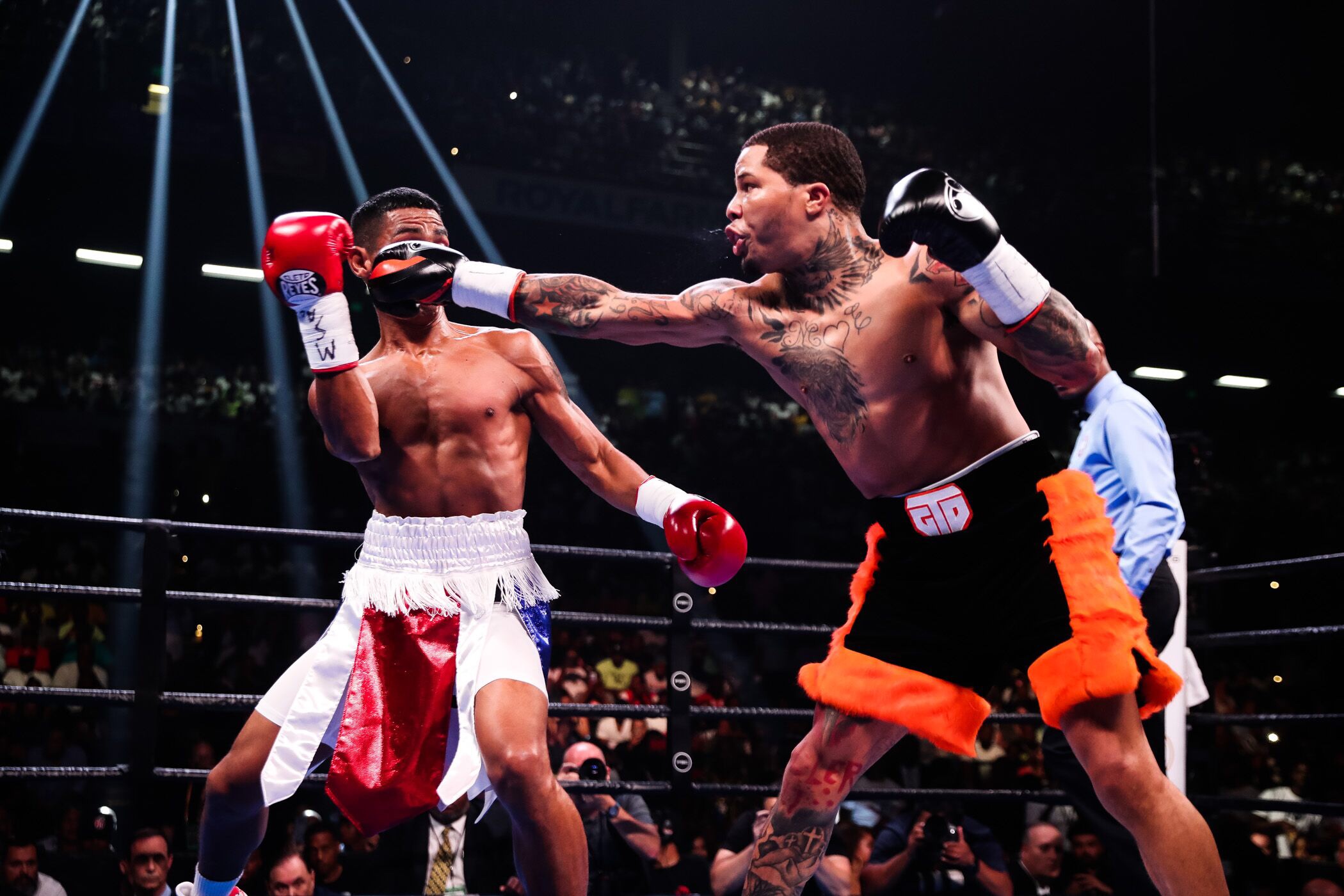 PHOTO BY: AMANDA WESTCOTT
“Tonight, we showed out,” Davis said.  “It’s amazing to fight in front of my hometown fans, my family.  It’s an incredible feeling.  It’s not just a win for me, it’s a win for Baltimore.  I want to do it again.
“I’m always ready.  He wasn’t.  He wasn’t alert and I caught it with my third punch.  I got him with a body shot.  I caught him with a really nice shot.  That was it.”
It was the second defense of the WBA belt for the 24-year-old, two-division world champion.
“I had the WBA belt and I had the IBF belt,” said the undefeated Davis. “Tevin Farmer fought tonight.  I want Tevin.  That’s a fight that can be made.  Let’s get it on later this year.”
After the fight, promoter Floyd Mayweather, who called Davis the future of boxing when he first won the title in 2017, lauded his star fighter. 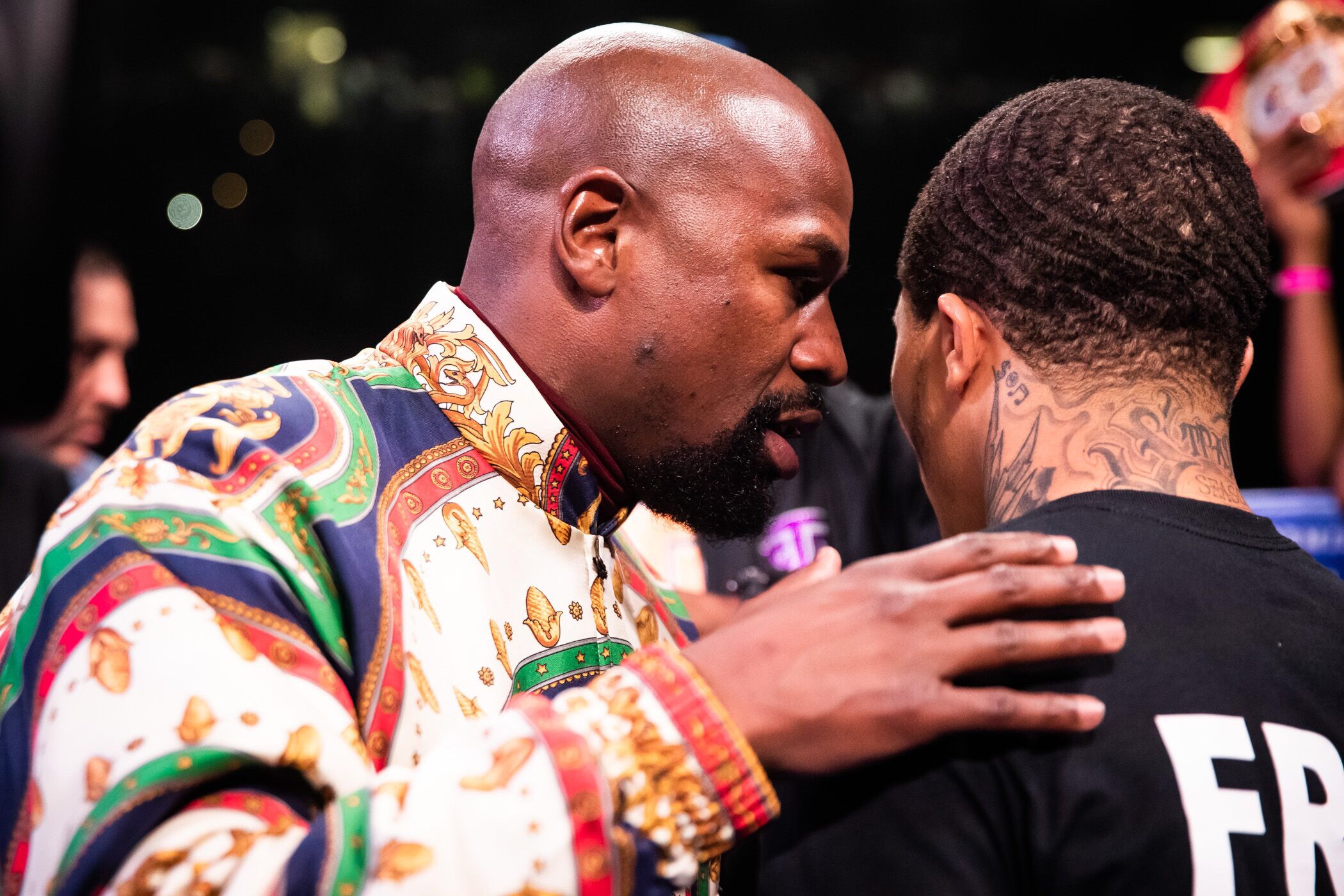 “Tank is an unbelievable fighter,” Mayweather said.  “He’s something special.  This is a pay-per-view star.  He has the charisma and the will to win.  He has a big heart and has a great team behind him.”
In the televised co-feature, former two-division world champion Yuriorkis Gamboa turned back the clock with a sensational second round knockout of Roman “Rocky” Martinez. 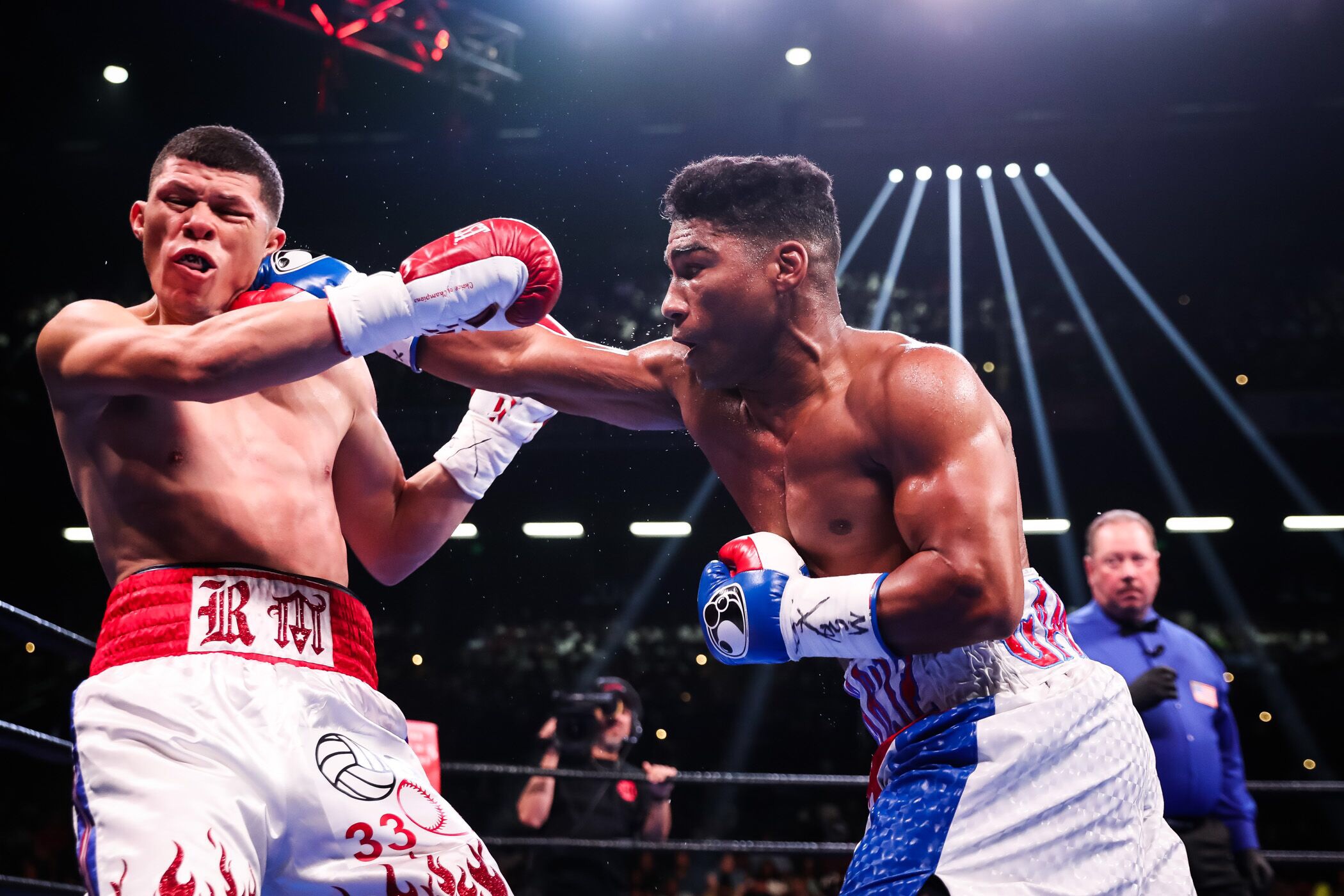 The former Cuban Olympic Gold Medalist displayed the brilliant hand and foot speed that has been the hallmark of his career, and paired it with tremendous combo shots.  He came forward from the opening bell, pressing the action against Martinez, who is usually known as the aggressor.
In the opening moments of the second round, Gamboa (30-1, 18 KOs) floored Martinez with a punishing left hook.  Martinez got up but Gamoba continued to press forward.  The second knockdown of the round was set up by another left hook followed by a powerful right to the face.  Stretching his jaw while on the canvas, Martinez (30-3-3, 18 KOs) failed to beat referee Bill Clancy’s 10 count. 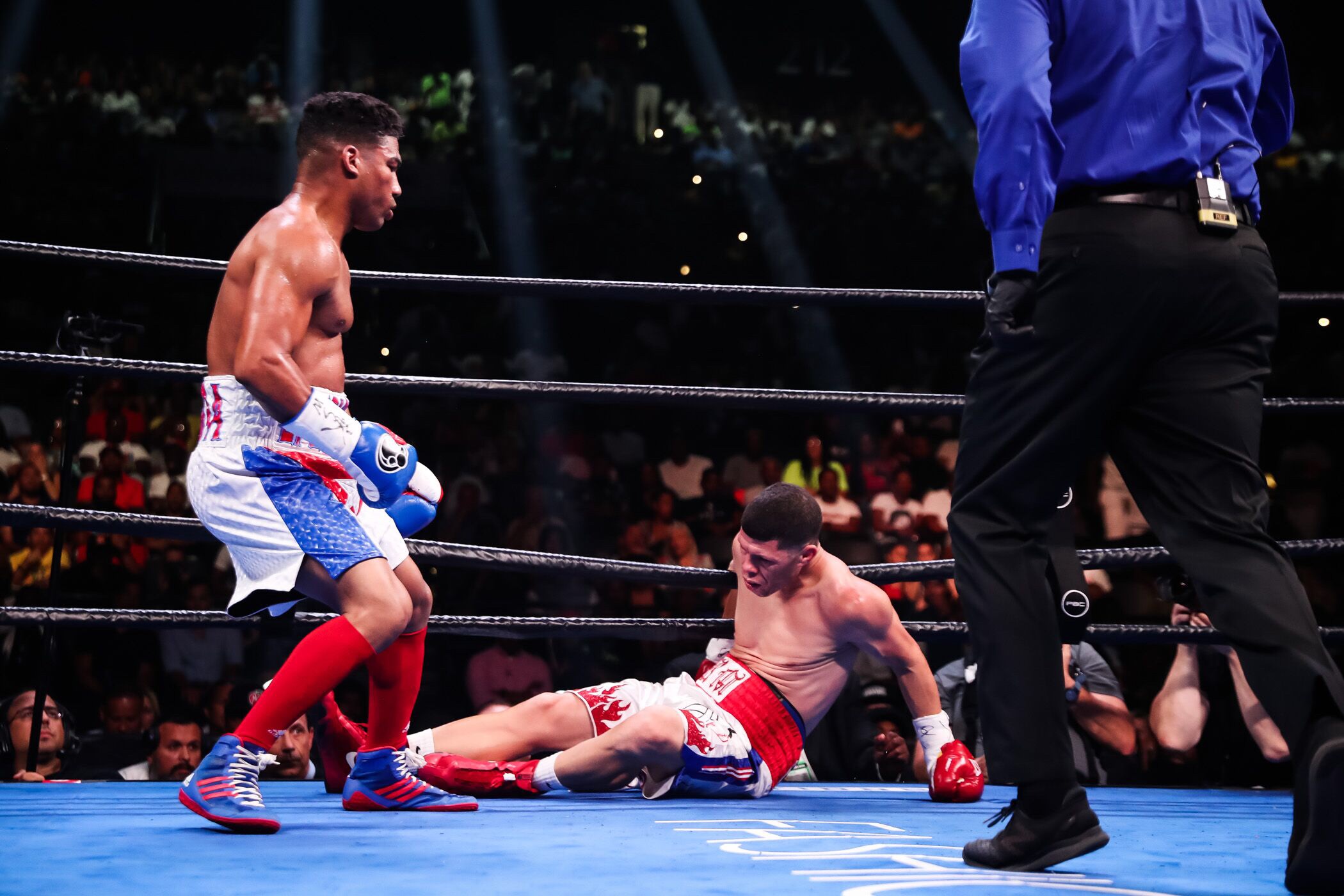 “It’s genetics.  I have explosive power, I have speed,” said the 37-year-old Gamboa.  “Even at this age, I still have it. I put my work in the gym.  I prepared well for this fight and it showed tonight.
“When I punched him with my left I knew he was not going to be able to withstand the power of both of my hands.  I tried not to suffocate him because I knew he was hurt.
The impressive victory may have earned Gamboa a shot at Gervonta Davis.
“I wanted a victory tonight so I can face Gervonta Davis next,” Gamboa said.  “That’s what I want.”
In the opening bout of SHOWTIME CHAMPIONSHIP BOXING, lightweight contender Ladarius Miller narrowly edged former world champion Jezreel Corrales with a split decision scored 96-93 (Corrales), 96-93 (Miller) and 95-94 (Miller). 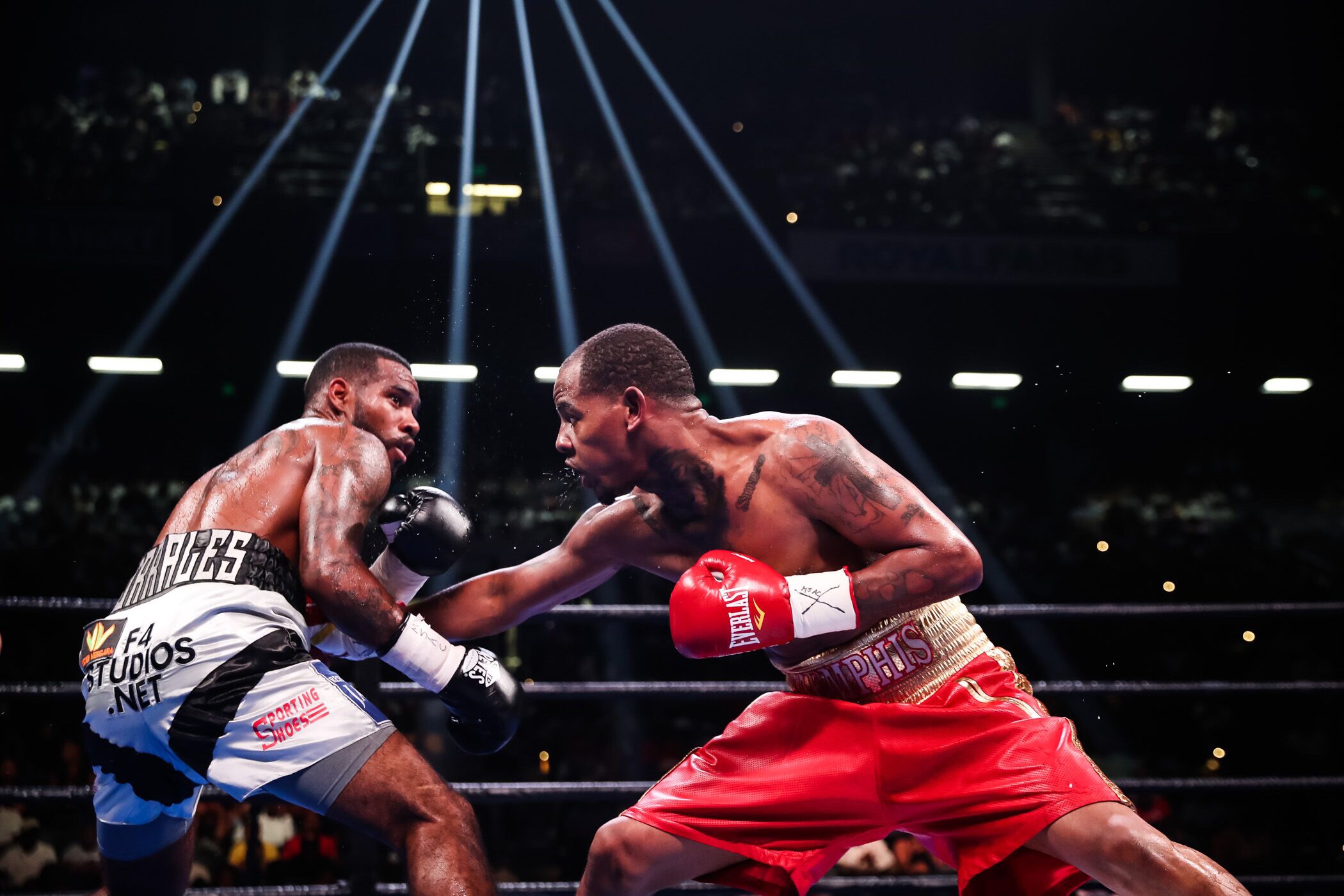 The 10-round lightweight bout was a difficult affair to score and was mostly fought at a distance.  Corrales was the busier fighter from the outset, throwing over 100 more punches than Miller, who didn’t utilize his typically effective body attack and inside game.  But while Corrales did more damage at close quarters, Miller was the more accurate fighter, particularly with his power shots that were thrown from a distance.
The defining moment in the fight occurred with just 40 seconds left.  With both fighters clinched and grappling to escape, Miller tossed Corrales to the ground.  In a puzzling decision, referee Brent Brovell deducted a point from Corrales, who had previously been warned for rabbit punching and low blows.  The penalty was costly.  Had the incident not have been ruled a penalty, Corrales (23-3, 9 KOs) would have won the round 10-9 on all three judges’ scorecards and escaped with a draw. 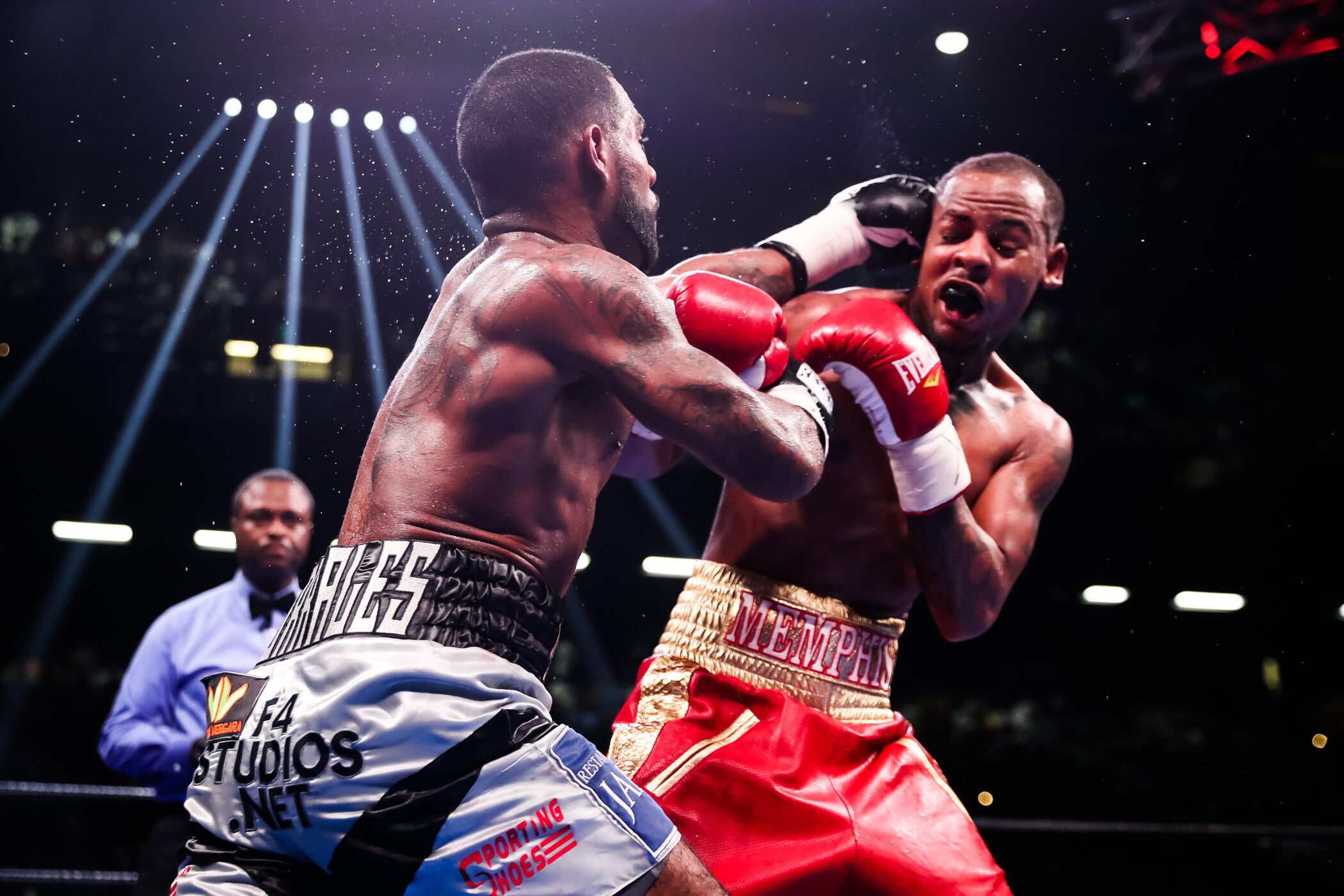 “I’m not happy with the decision,” Corrales said.  “I don’t think it was fair to give Miller the victory.  The fans here in the arena told me I won the fight.  I know I won the fight.
“Miller is a good fighter and I don’t want to take away from his hard work, but I was the one coming forward, I was the one attacking.  I won that fight.  I respect the judges’ scorecards, but I want a rematch.  I would like an immediate rematch so I can get the win I deserve.”
For Miller (20-1, 6 KOs), his 11th consecutive victory inched him closer to a world title shot in the lightweight division.
“He came out here and made it an ugly fight, but I got the job done,” Miller said.  “I was just trying to go for the knockout.  I think that if I would have settled down more it would have been better, but I was really trying to go for the knockout, and it made the fight a lot tougher than me.
“I’ve got to get back in the gym and continue to work on the things that can make me better.  He was a veteran, a former world champion.”
In streaming action on SHOWTIME CHAMPIONSHIP BOXING COUNTDOWN, undefeated welterweight and Baltimore native Malik Hawkins (16-0, 9 KOs) defeated Jonathan Steele (9-5-1, 6 KOs) via eight-round unanimous decision scored (78-74, 79-73 twice).  Dylan Price (9-0, 6 KOs) kept his undefeated record in tact with an eight-round unanimous decision (78-74, 79-73 twice) over Samuel Gutierrez (16-24-6, 6 KOs).  And in the opening bout of SHOWTIME CHAMPIONSHIP BOXING COUNTDOWN, super lightweight Kareem Martin (13-2-1, 4 KOs) defeated Luis Avila (8-14-3, 5 KOs) via TKO after referee Harvey Dock stopped the bout at the end of the third round.