BALTIMORE (July 24, 2019) – WBA Super Featherweight World Champion and Baltimore native Gervonta “Tank” Davis was honored in his hometown Wednesday as Baltimore Mayor Bernard C. “Jack” Young presented him with the Key to the City at a ceremony at City Hall. Davis becomes the first world champion from Baltimore to make a homecoming title defense in nearly 80 years this Saturday night live on SHOWTIME against Ricardo Núñez from Royal Farms Arena.

With his mother and father in attendance, in addition to a throng of local media, the 24-year-old talked about his path from growing up in Baltimore, becoming world champion twice and how he now hopes to inspire the youth of his city.

Tickets for the event, which is promoted by Mayweather Promotions and TGB Promotions in association with GTD Promotions, are on sale now and can be purchased at Ticketmaster.com or at the Royal Farms Box Office Monday through Friday from 10 a.m. ET to 5 p.m. ET.

Here’s what Davis and Mayor Young had to say on Wednesday: 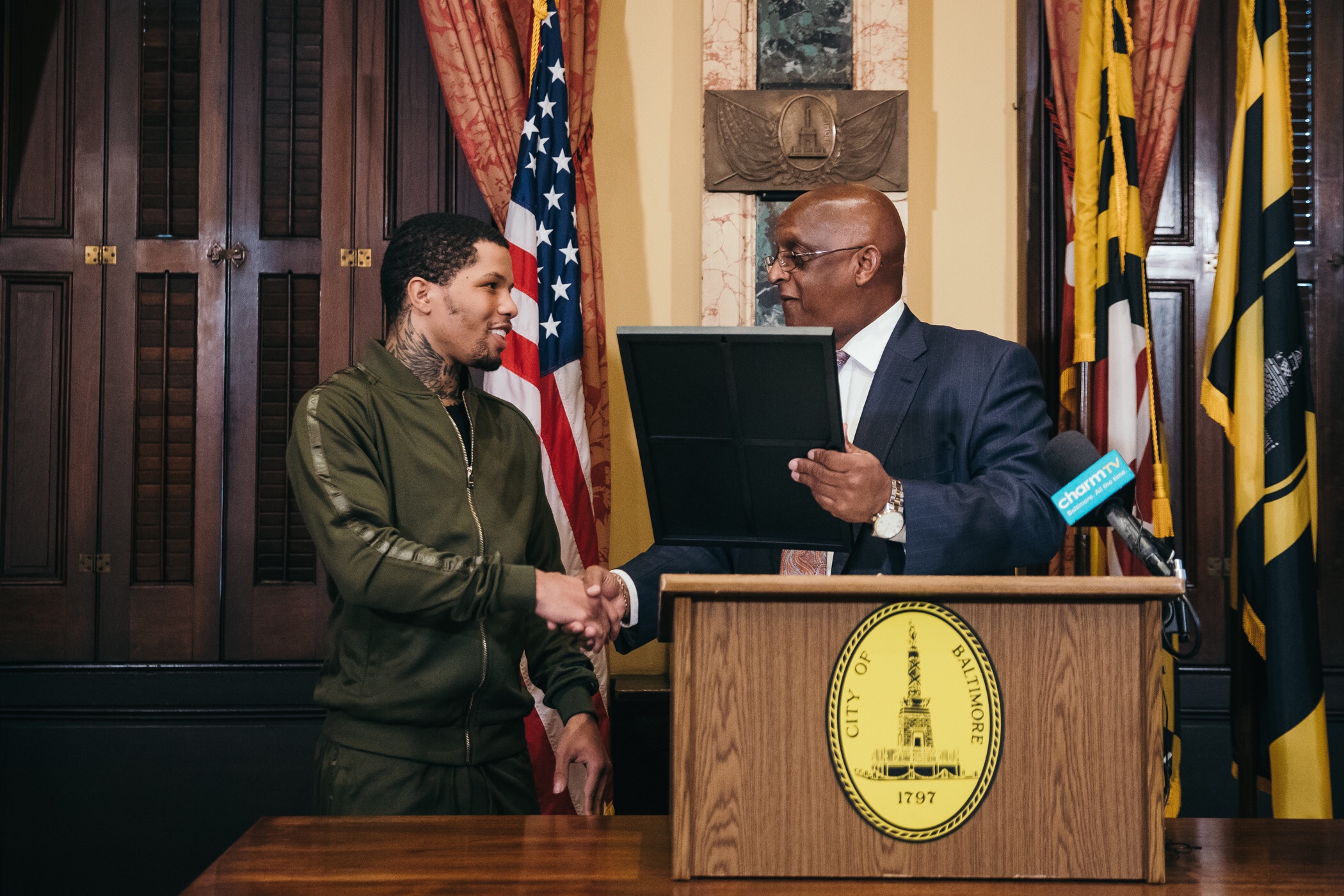 PHOTOS BY: AMANDA WESTSCOTT FOR SHOWTIME

“Boxing is a very important aspect of my life. I know a few people that used to box that I came up under that got killed due to the violence in this city. I thank God for allowing me to stay in the gym and for allowing me to remain focused on my goal to become a professional boxer. Bringing boxing to Baltimore will help bring a lot of inspiration to the city, especially to the young kids out there on the streets that may not have any other way out.

“I never thought I would get the key to a great city like Baltimore. Growing up in the way that I did, I would never have imagined being here right now on this stage getting the key to the city. It is a great honor and I am very proud to be a part of this city’s great history. I am thankful for this opportunity and will make the most out of it.

“I remember coming in the gym as a kid and my coach would tell the older fighters to get out of the street. He would tell them to stop having one foot in and one foot out of the gym. I would then see six months to a year later that those guys were killed.

“Boxing saved my life and a lot of other kids lives. For the most part, we are still here doing it. We have a lot of young guys coming behind us and we are making the best of it. 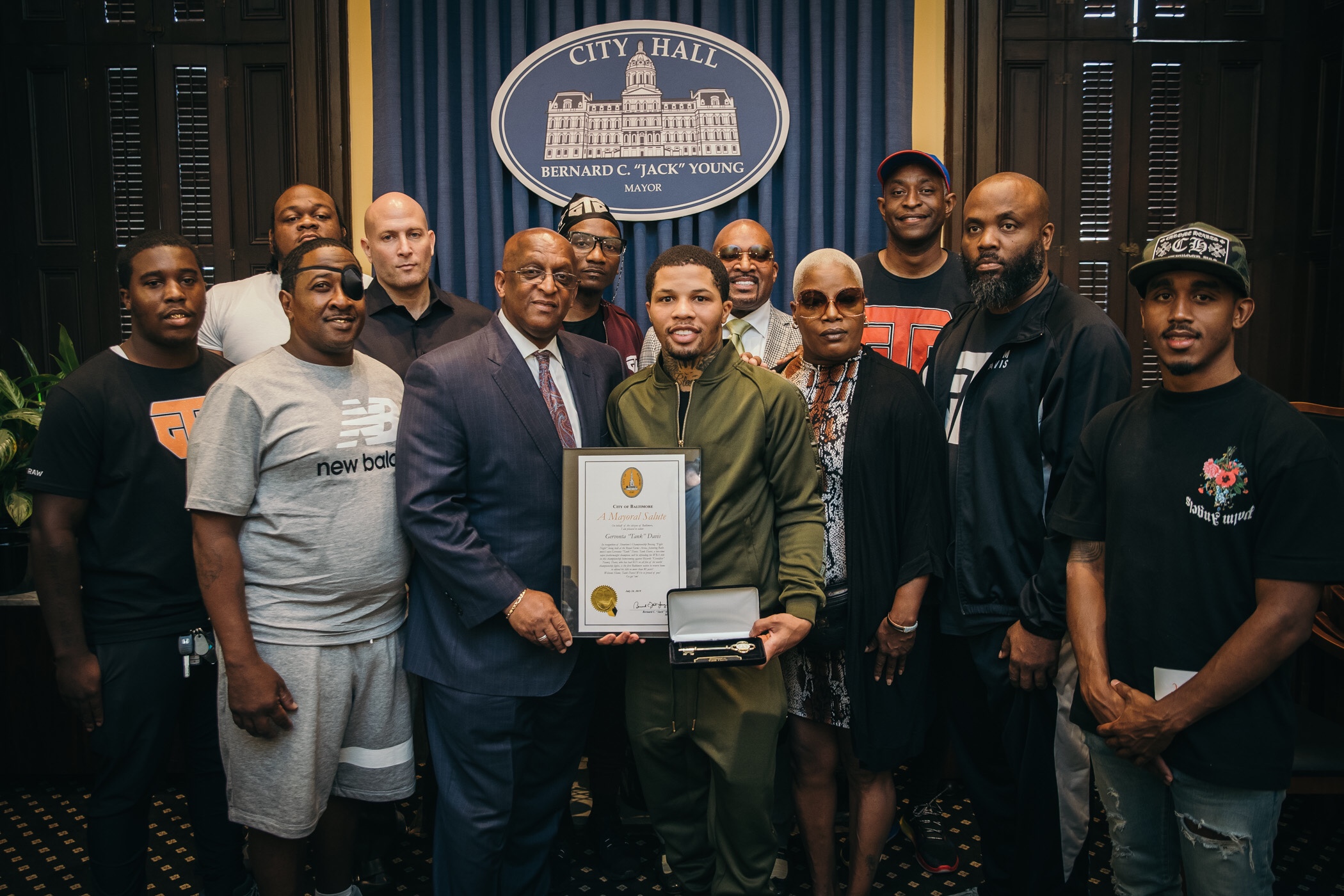 “My most important focus is the guy that is in front of me Saturday night. I love the pace of which my career is going. I am getting paid well, I am fighting well and I know my future fights. I am just soaking it all in and getting ready to fight. I have been training more and taking boxing seriously and becoming more professional. I am maturing inside and outside of the ring, so I am ready.

“My tattoo ‘blessed’ and a tattoo about the riots when Freddie Grey was killed mean the most to me. I believe I overcame a lot so I put ‘blessed.’ And the Freddie Grey tattoo means a lot because the situation was big for the city. There was a lot of negativity but we overcame it.

“I am looking forward to giving back to the city on a positive level. Just bringing my city together on a big event. I want everybody to be a part of the fight. I think my team and I did well so Saturday night we just have to watch it play out.

“I know I’m ready, I know Baltimore is ready. Saturday is going to big for all of us.”

“We have some great events happening in our city this summer. On Saturday night we will have a world championship boxing bout at the Royal Farms Arena and that is all thanks to this guy standing next to me. Welcome home ‘Tank’. I’m really excited for the championship this weekend in this great city. 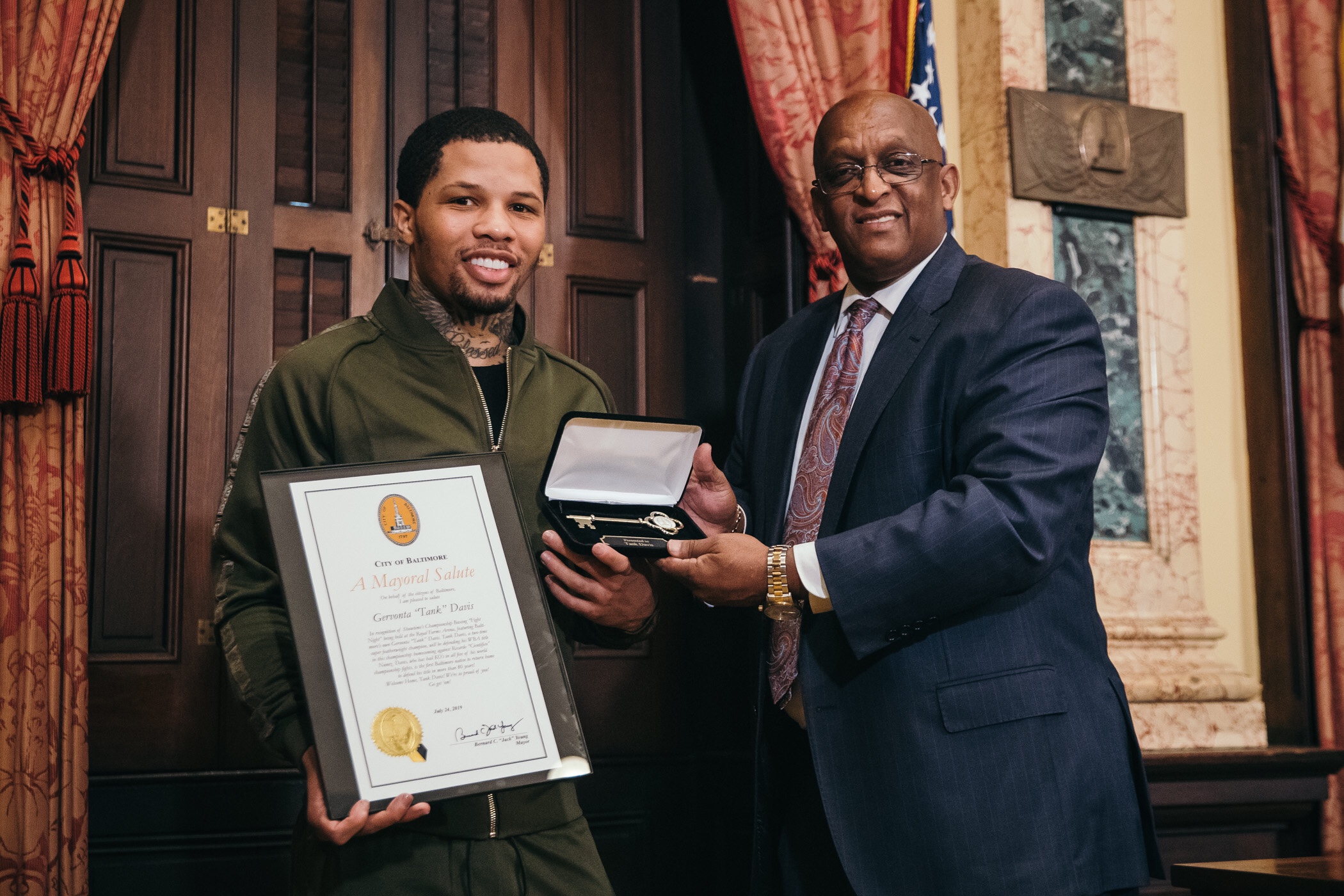 “I am a big fan of the sport. This is huge for the city of Baltimore as a world class tourist destination and for the generation of residents, this is a great experience to witness something great in their very own hometown.

“I want to thank ‘Tank’, Leonard Ellerbe, their team and Mayweather Productions for making this dream a reality. ‘Tank’ Davis, the two-time super featherweight world champion will defend his WBA 130-pound title right here in Baltimore. Tank will become the first world champion from Baltimore to make a homecoming defense in nearly eighty years, and that’s huge.

“The boxing history of Baltimore dates back over centuries and during that time our city has produced eight world champions and numerous top contenders. I’m really excited to cheer for our latest champion as he defends his title belt right here at home.

“’Tank’ Davis is the two-time super featherweight title and will be defending his WBA in this championship homecoming against Ricardo Nunez. Davis has had knockouts in all five of his championship fight.

“Welcome home ‘Tank’ Davis, we are so proud of you, go get em. As the Mayor of Baltimore it is my pleasure to present Gervonta ‘Tank’ Davis with the key to the city.”