Newark, N.J. (July 13, 2019) — Ever since he turned pro following the 2016 Olympics, featherweight contender Shakur Stevenson wanted to return home to Newark. In front of 5,150 fans at Prudential Center, Stevenson, the WBO No. 1 contender, knocked out two-time world title challenger Alberto “Metro” Guevara (27-5, 12 KOs) in the third round of a scheduled 10-rounder.

“That was a great performance I put on for the city of Newark. Top Rank, y’all all have to give me better competition I want the IBF and WBO {titles}. I would love to go to England to fight Josh Warrington,” Stevenson said. “I surprised myself today. I was going to the body a lot. I saw him at the weigh-in. He didn’t look like he was in shape. 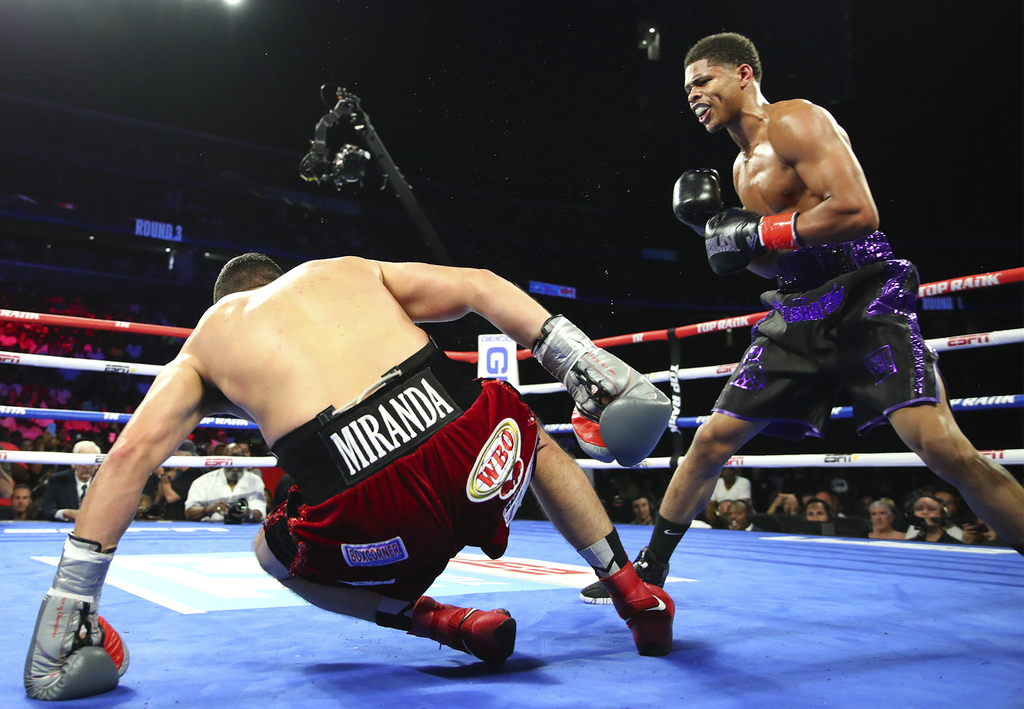 “There is only one way to describe tonight – amazing! Seeing all of my family, friends and everybody from the city come out to support me was incredible.”

Stevenson (12-0, 7 KOs) dominated the opening round, scored a pair of knockdowns in the second and finished things off with a knockdown in the third. It was a short, brutal and just what the crowd wanted. 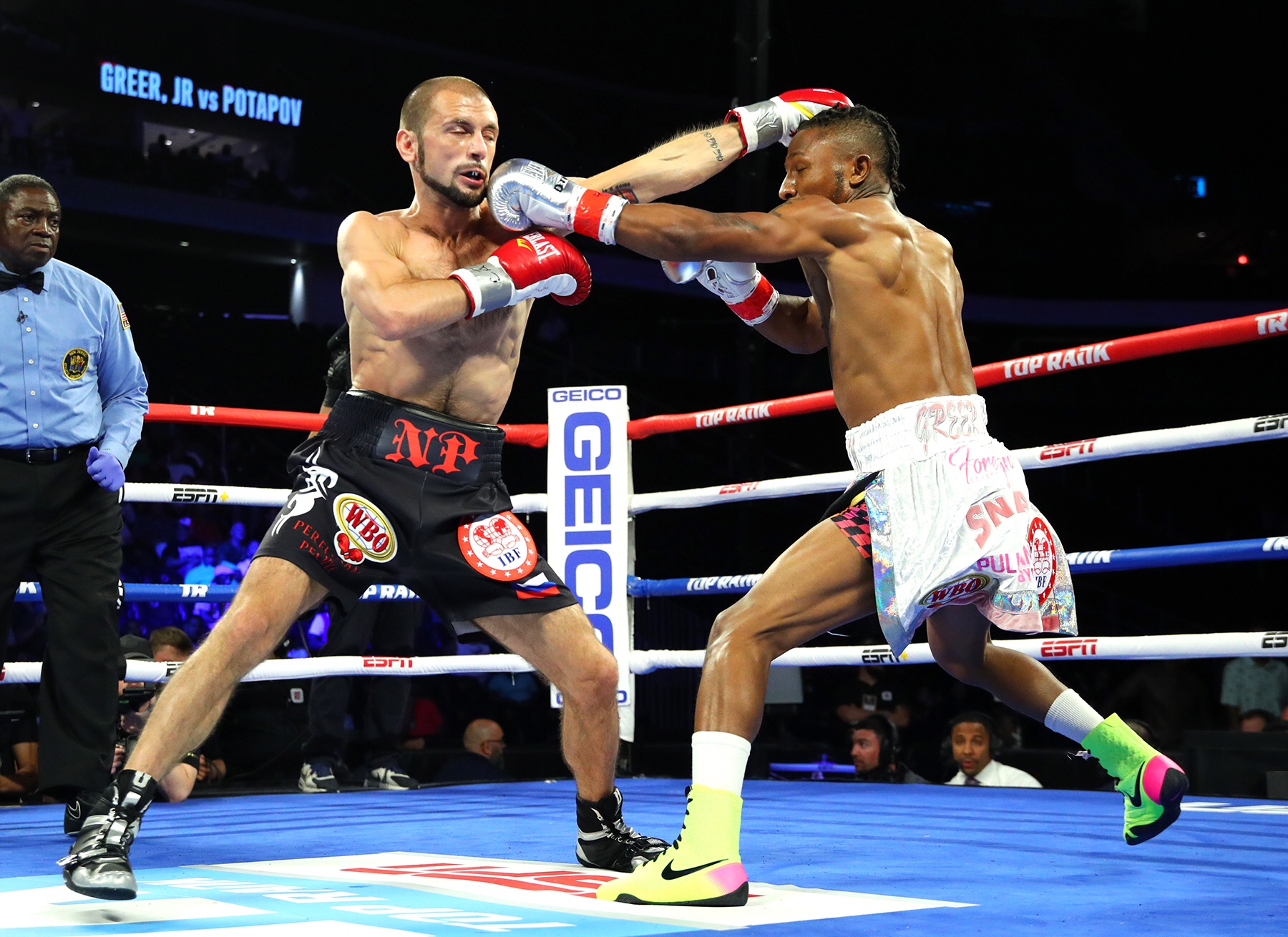 Greer swept the 12th round on all three judges’ scorecards to secure the win in what was a tactical affair. Potapov (20-2-1, 11 KOs) snapped Greer’s seven-bout KO streak, with some ringside observers believing he did enough to pull off the upset.

“He’s very awkward with the Russian style. But at the end of the day, this is the pros. And at the end of the day, I pulled it out,” Greer said. “The booing didn’t bother me. I know I won the fight. Every time I hit him to the body, I hurt him. I didn’t get the knockout, but I got the win. Next time out, you’ll see the pillow again.”

— After nearly two years out of the ring, super lightweight Julian Rodriguez (17-0, 11 KOs) needed only 59 seconds to knock out Hevinson Herrera (24-18-1, 18 KOs) in front of his devoted Northern New Jersey fans.

Rodriguez, only 24 years old, was out of the ring due to assorted injuries. 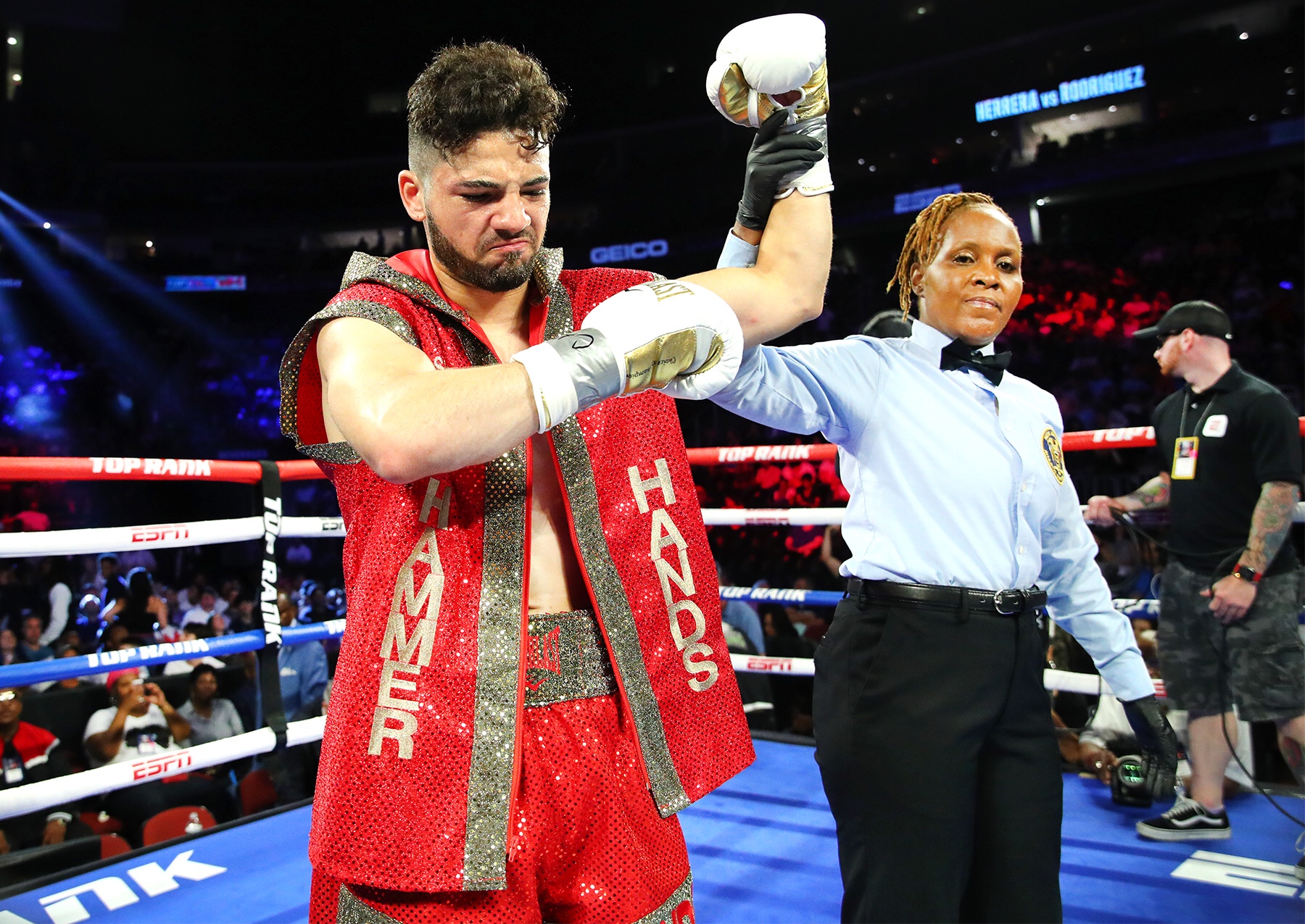 “I was very confident in my preparation, so I felt like I had to go in there and do what I had to do,” Rodriguez said. “That’s what {the fans} like about me. When they come here, they see a show.”

— Vijender Singh (11-0, 8 KOs), a three-time Olympian and the fighting pride of India, had a successful United States and Top Rank debut, knocking out Mike Snider (13-6-3, 8 KOs) in the fourth round of a scheduled eight-round super middleweight bout. 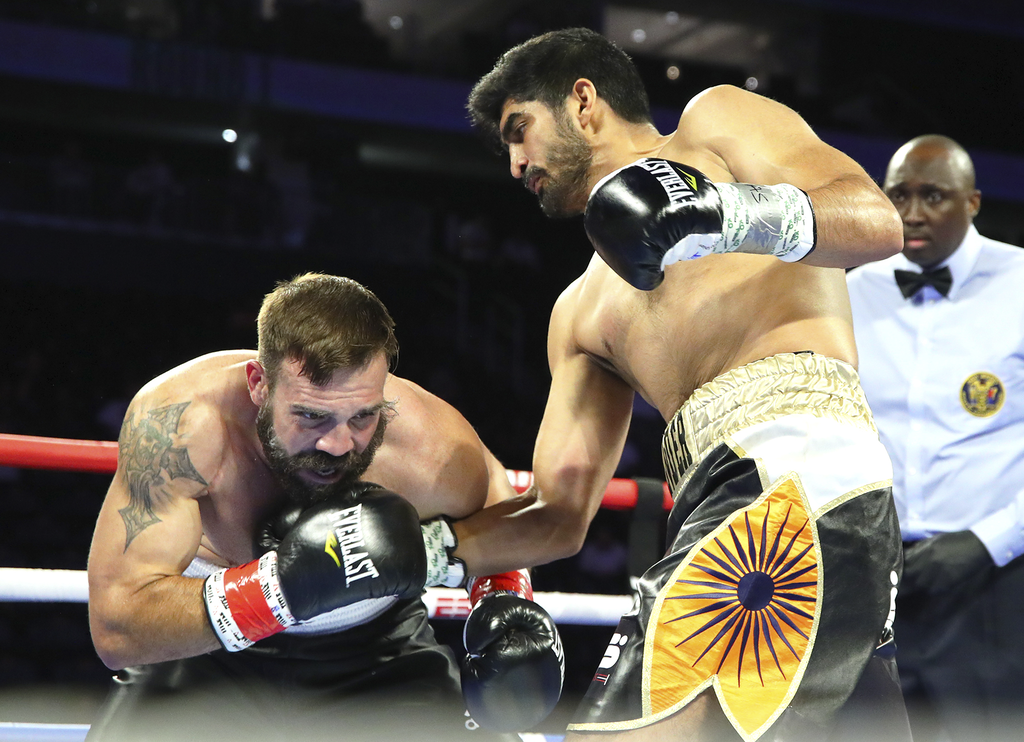 “It was excellent getting back in the ring after a long time off. It’s great to be here in the USA and get the win. It was really exciting,” Singh said. “It took me about four rounds to get back in the swing of things. I expected it to take two or three rounds, but it took me four. I felt good.”

— Joseph “Blessed Hands” Adorno (13-0, 11 KOs) continued his rapid rise up the lightweight ranks, knocking out Adriano Ramirez (10-4, 6 KOs) in the second round of a scheduled eight-rounder. Adorno knocked down Ramirez a pair of times in the second, and referee Sparkle Lee immediately called a halt to the bout following the second knockdown. 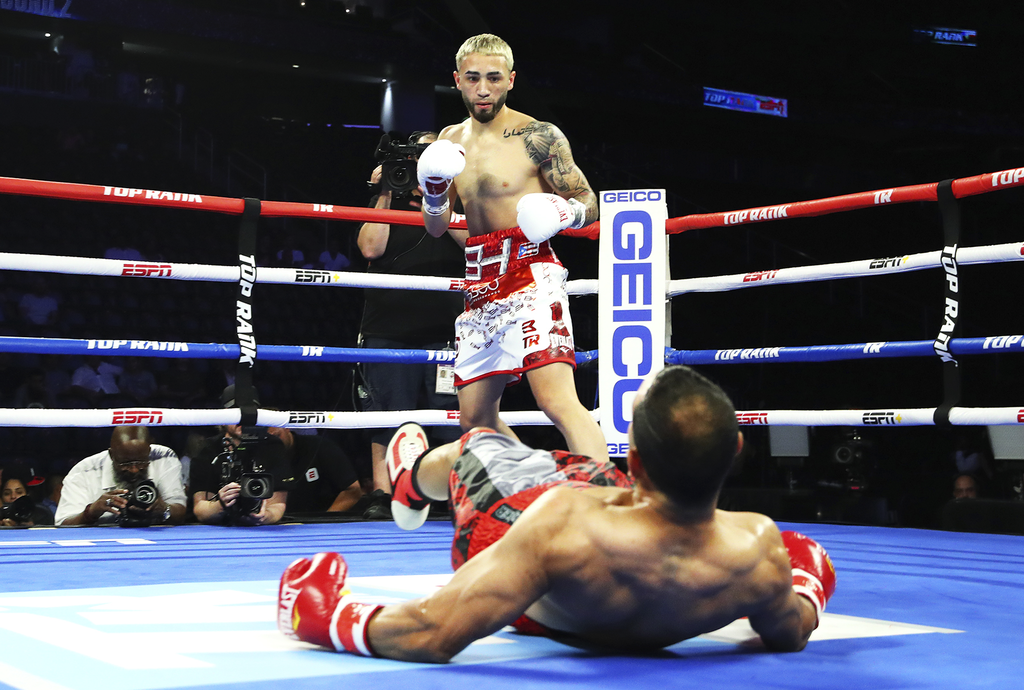 — Josue “The Prodigy” Vargas (14-1, 9 KOs) won his eighth fight in a row, knocking out the rugged veteran Manuel Lopez (14-4-1, 7 KOs) in the seventh round of a scheduled eight-round welterweight bout. 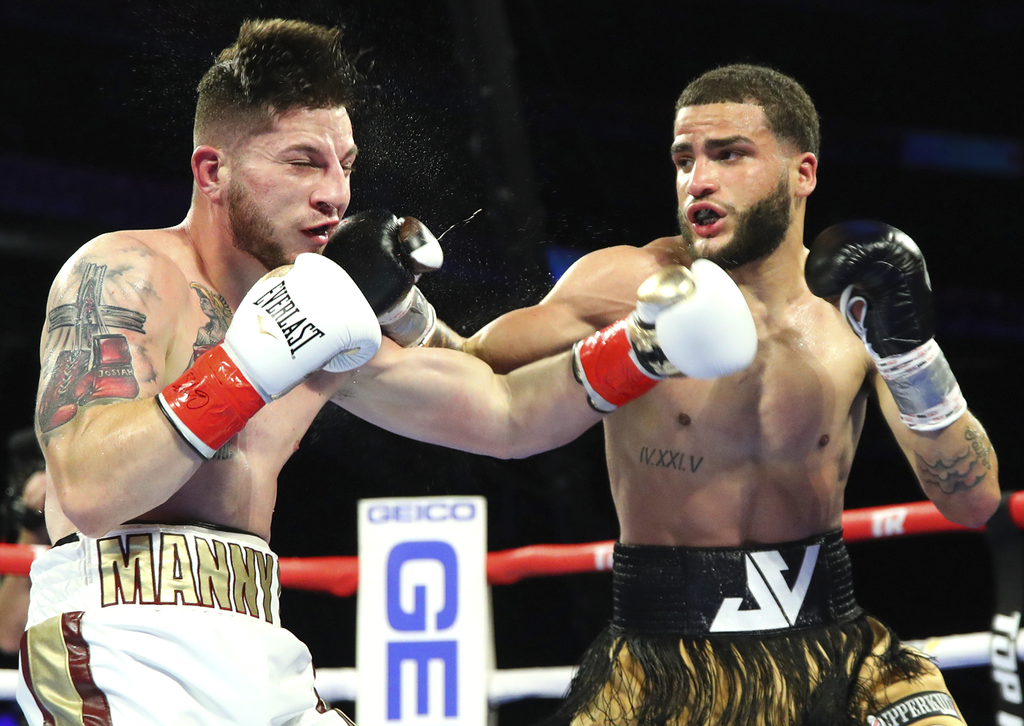 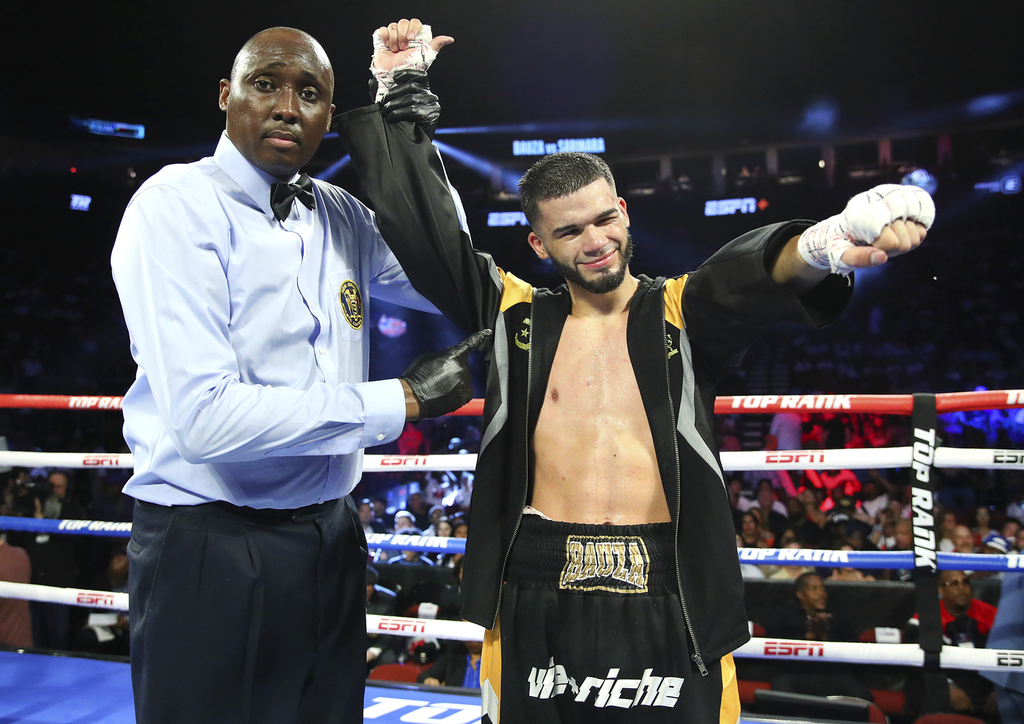 — Vito Mielnicki Jr., a 17-year-old high school senior from Roseland, New Jersey, knocked out Tamarcus Smith (2-3, 2 KOs) in 1:16 in his professional debut. A savage right hand put Smith down and out for the count in the scheduled four-round welterweight bout. 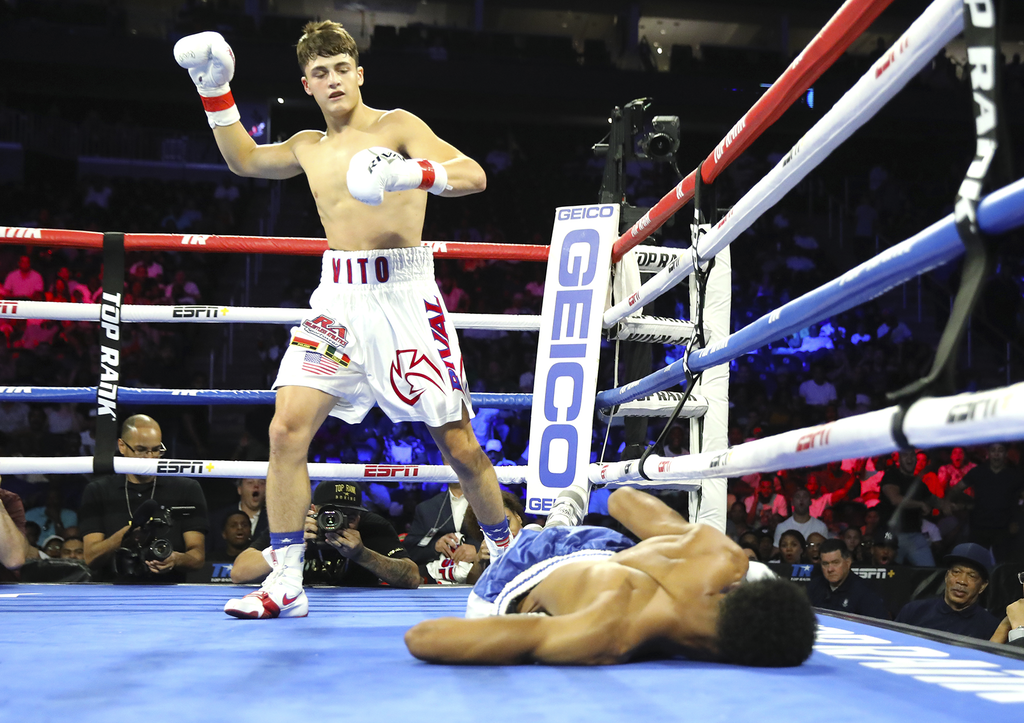