CARSON, CALIF. (July 13, 2019): Rey Vargas (34-0, 22 KOs) of Mexico City, Mexico successfully defended his WBC Super Bantamweight World Title via 12-round unanimous decision against No. 1 Contender and former world champion Tomoki “El Mexicanito” Kameda (36-3, 20 KOs) of Osaka, Japan. Vargas won a very tough battle with three scores of 117-110. The event took place on Saturday, July 13 at Dignity Health Sports Park and was streamed live on DAZN.
“The idea was to throw a lot of punches and to have a very intelligent fight,” said Rey Vargas. “I believe that we made this a very smart fight, an intelligent one. This is a boxer’s style, to fight with precision. I believe that he brought a lot of fans from Japan and that’s why they don’t agree with the decision. He mentioned before that he has all the experience. I knew that Kameda was going to push but again, we did a very, very smart fight.” 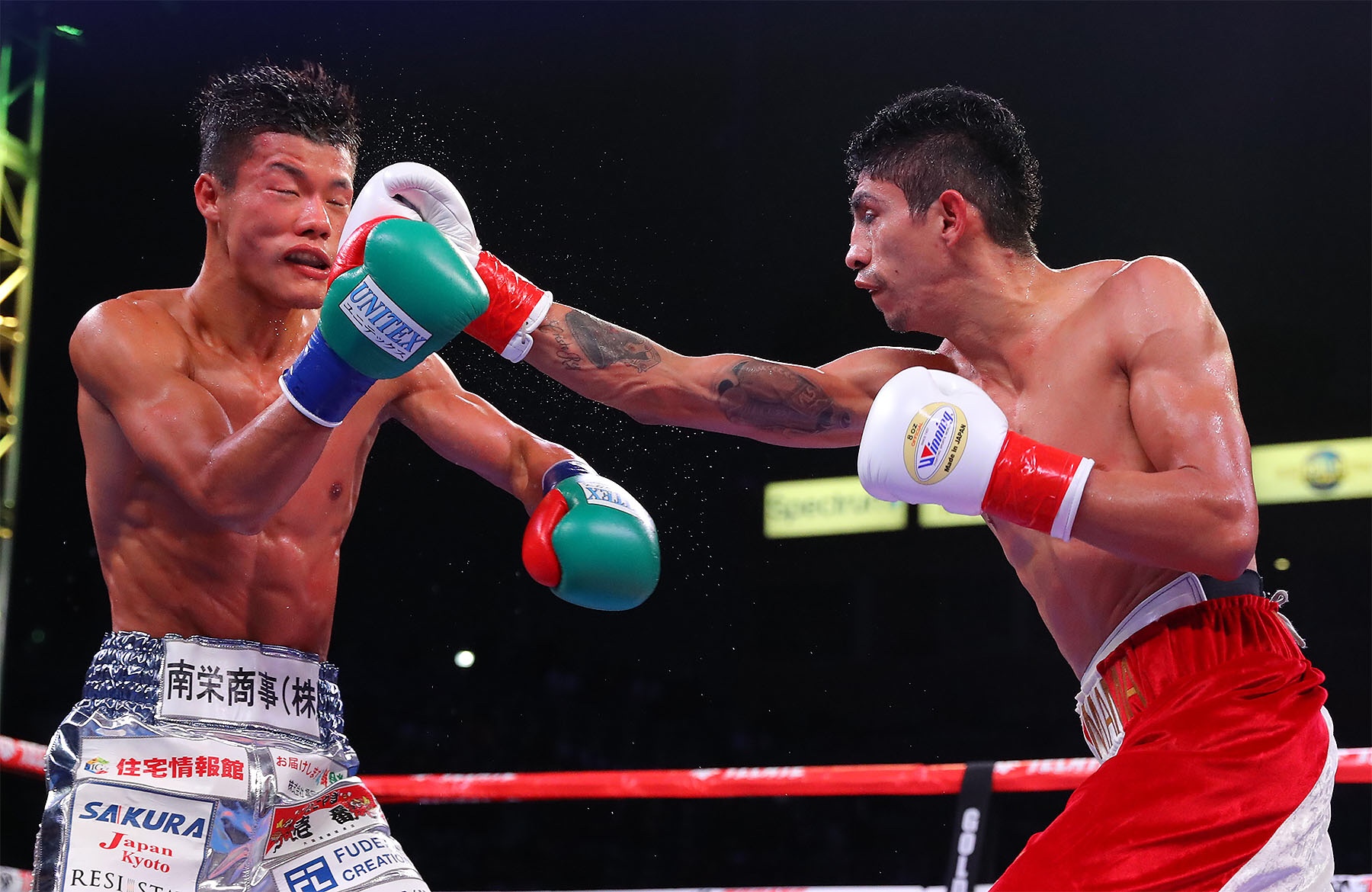 PHOTOS BY: TOM HOGAN FOR HOGAN PHOTOS FOR GOLDEN BOY PROMOTIONS
“I want to fight Danny Roman. We need to unify titles, why not? I want all three titles. Danny, we are ready. I am ready whenever you want to fight. You know when a Mexican fight another Mexican, it’s a war.” 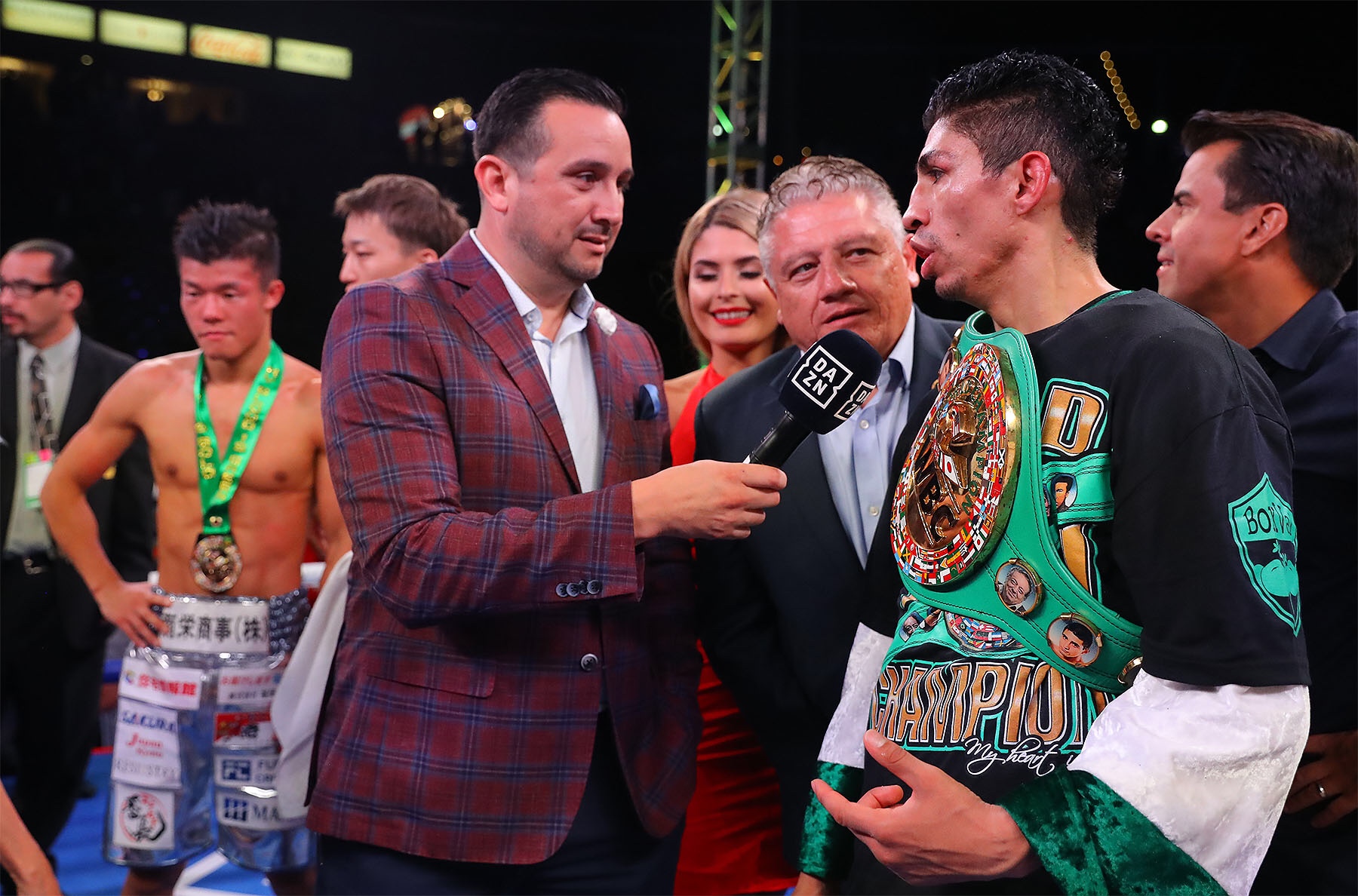 “First of all, I want to say thank you to everyone,” said Tomoki Kameda.”I recognize Vargas. I believe that he won the fight tonight and I respect him as a champion. He won. I need to learn and to practice more in order to get another chance to be champion again. I am very grateful for all the Mexican people. I want to be world champion again.”
Ronny Rios (31-3, 15 KOs) of Santa Ana, Calif. defeated Diego De La Hoya (21-1, 10 KOs) of Mexicali, Mexico via upset, sixth-round technical knockout in a battle originally scheduled 12 rounds. Rios, who captured the NABF and WBA Gold Super Bantamweight Titles, won the fight with time of 1:17 of the aforementioned round. 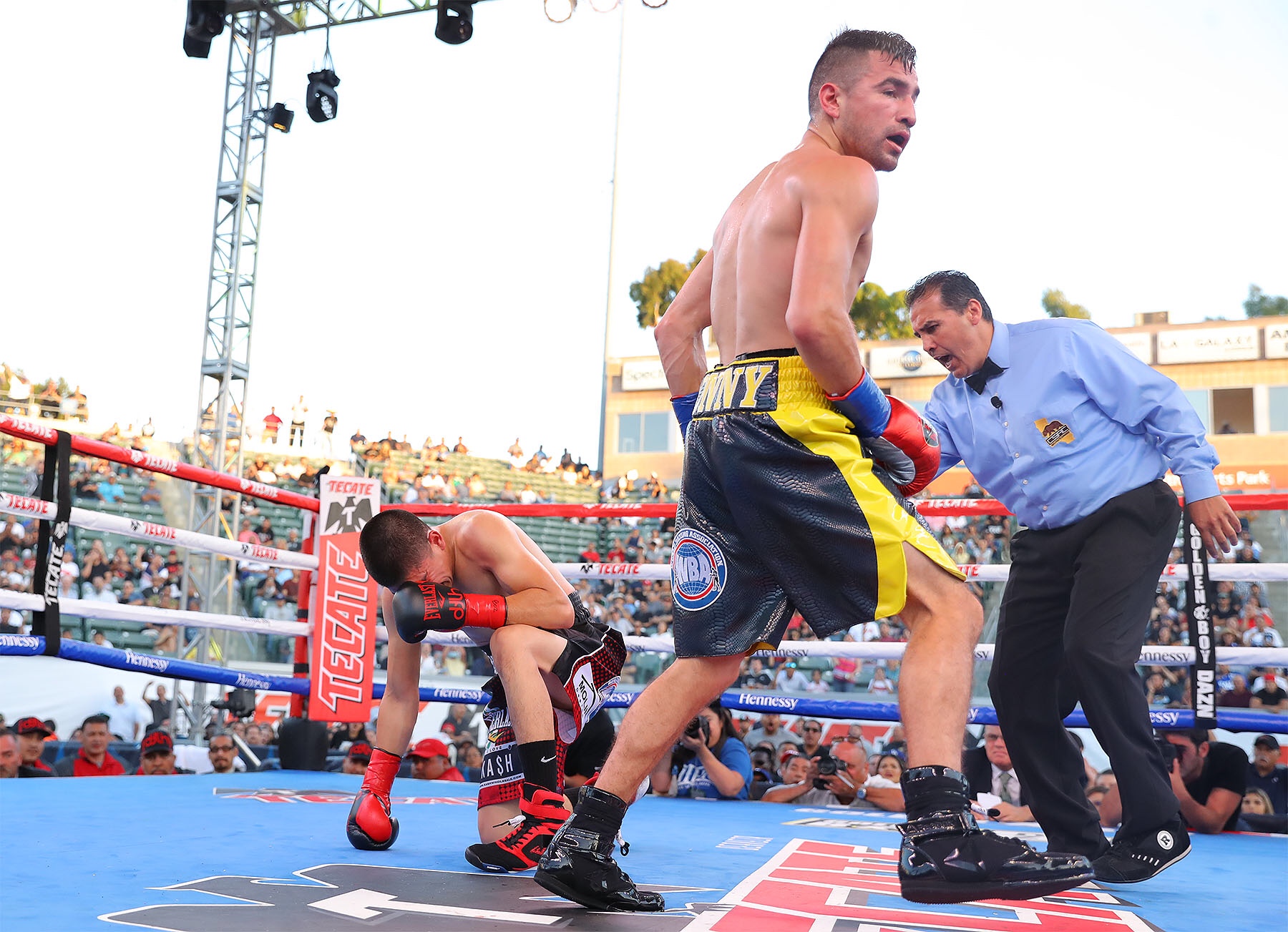 “I feel great. It is an unbelievable feeling,” said Ronny Rios. “Especially winning in front of my friends and family who came out here to support me – I want to thank you guys from the bottom of my heart. I did this for me, but I dedicate this victory to you guys.”
“To be honest with you, I think a lot of fighters tend not to focus too much on the mental side. I think this time, I felt very hungry and mentally focused. With other fights, I think I would overthink it and let it get to my head.”
“I was in a dark place. It was very hard to come back but thanks to my team, especially Hector Lopez who pushed me. He got me mad, he got me irritated at times. But man, he inspired me to come back and not for anyone else, but for myself. I am proof to fighters all around the world: no matter how many times you lose, you can still come back as long as you believe in yourself. No matter what – boxing, your career – just go for it man. I am not done. I still have a lot more years left. This was a hard camp, I pushed them. They told me to ease up. I would tell them that my opponent was outworking us and I kept pushing.”
“I saw a lot of tape and noticed that [De La Hoya] has a really high guard. It leaves him open to the body. We were working on that in the gym a lot. Honestly, it was shock. I didn’t know he was going down. I know Diego, he is a warrior and he’s never been down.”
“I told the referee that I didn’t feel good,” said Diego De La Hoya. “I don’t know what it was. I was hurt in my head. I didn’t feel well. I didn’t feel right. I did my best camp possible and I didn’t do that in the ring. You have to accept the losses just like you accept the wins.”
Joet Gonzalez (23-0, 14 KOs) of Glendora, Calif. defeated Manuel Avila (23-2-1, 8 KOs) of Fairfield, Calif. via technical knockout in the sixth round of a 10-round clash to capture the for the WBO Global and WBA Continental America Featherweight Titles. Gonzalez won with time of 2:27 of the round just mentioned. 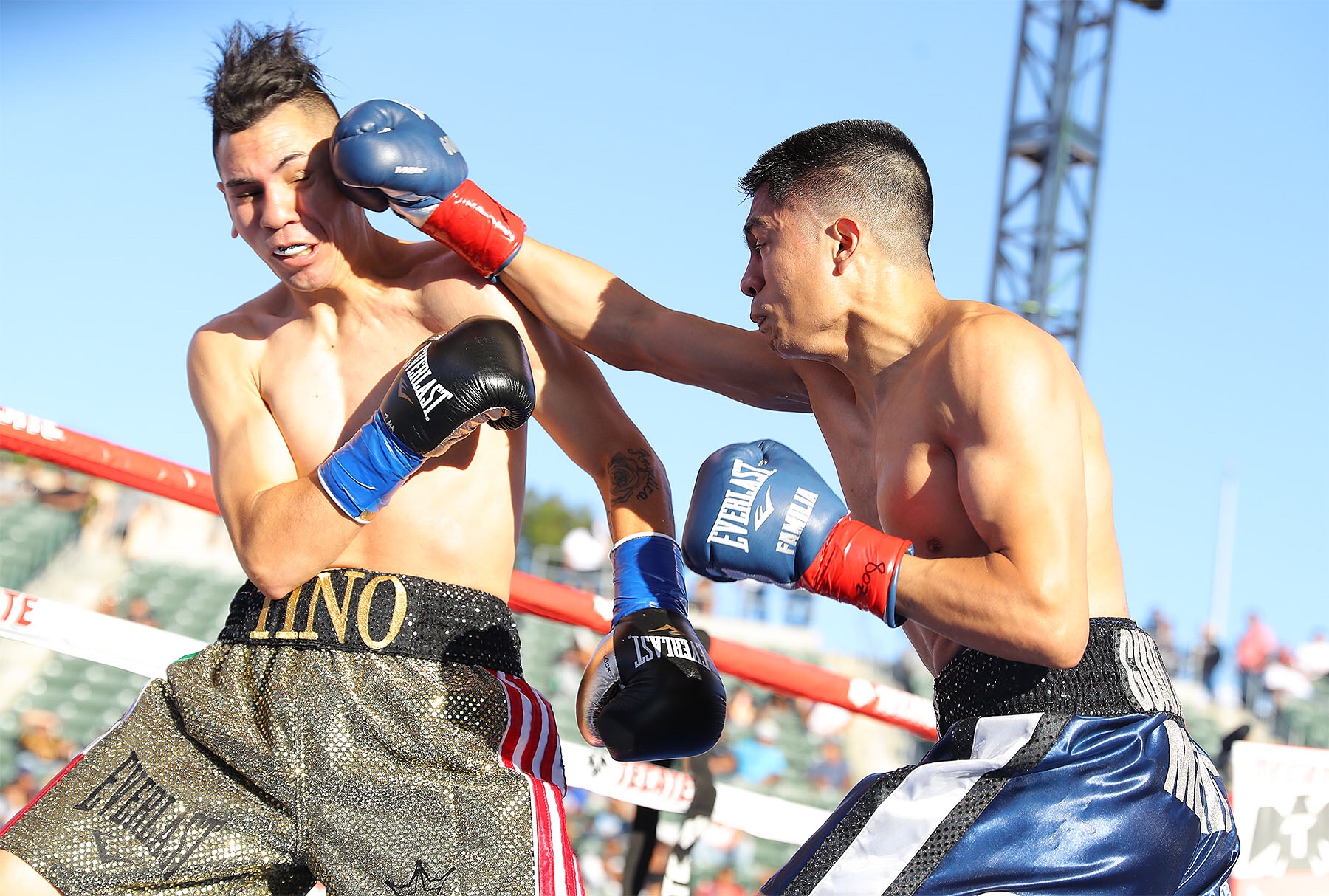 “I was confident because I went for it. I work hard every day in the gym,” said Joet Gonzalez. “All I do is sleep, eat and everything boxing. I am confident in myself so when I say I am going to do something, that is exactly what I am going to do.”
“It was time to go. My corner was telling me to finish him. I could tell that by the second or third round, he was gassed. I knew he wouldn’t be able to box long. And I got him out in the sixth.”
“I want to fight any champion at 126. Anyone who is running their mouth, come down to 126 or come up or whatever. Everybody is running their mouth. Shakur Stevenson and JoJo Diaz. All I do is box, all they do is like to run their mouth on social media. Run your mouth face to face, do something then. They just say they are going to slap me around. That’s girly stuff, I’m a grown man. I want the belts first but I will give it to them.”
“To my new fans, I hope you enjoyed the fight. I am going to keep working hard. I don’t care if I lose. I am not like these cherry pickers. I will fight the best and beat the best. I just want the champions and I will keep training hard to give you great fights.”
“Thank you for the support,” said Manuel Avila.”I will be back.”
Roger Gutierrez (22-3-1, 19 KOs) of Maracaibo, Venezuela scored a first-round knockout victory against Rocky Hernandez (28-1, 25 KOs) of Mexico City, Mexico in a battle originally slated for 10 rounds in the 130-pound division. Gutierrez won with time of 2:39 in the aforementioned round. 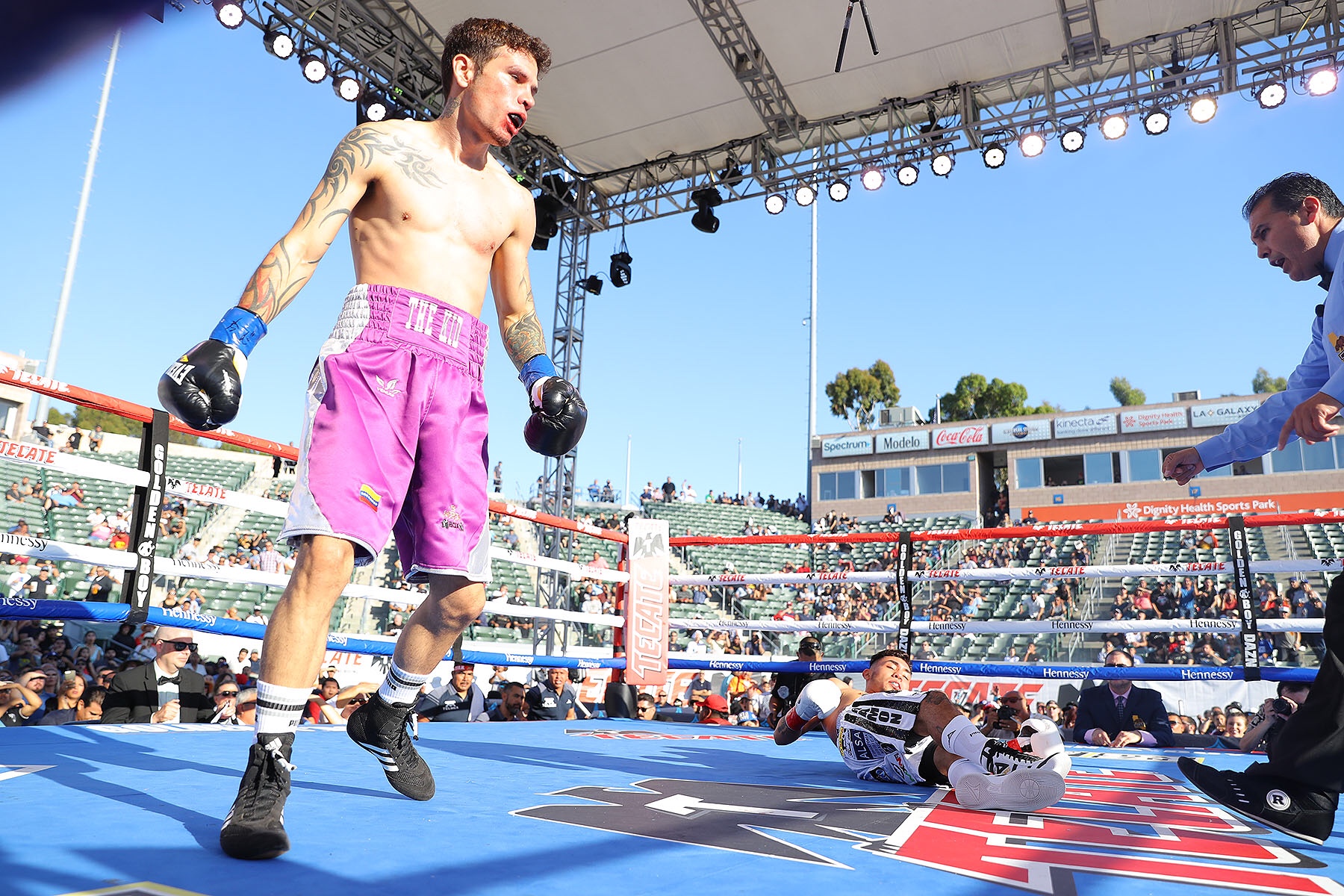 “I won with my mentality,” said Roger Gutierrez. “I came in here to rip his head off and that’s what you saw. It was my mentality that made the difference. Everyone on my team, my family, my parents, my children – they all believed in me. That’s how I did it.”
“Yes, of course I felt I could win. I always had the mentality that I would be able to win and that’s why I did. I want to take the opportunity to greet everyone here in Los Angeles and let them know that the era of Roger Gutierrez has begun.”
Alexis Rocha (14-0, 9 KOs) of Santa Ana, Calif. beat Berlin Abreu (14-3, 11 KOs) of Rio Piedras, Puerto Rico via technical knockout in the eighth round of a 10-round bout for the WBC Continental Americas Welterweight Title. Rocha won with time of 2:56 in the aforementioned round.
“I feel good. He was way tougher than I expected,” said Alexis Rocha.”Kudos to him. But I’m hard on myself. I’m my biggest critic. I think I should have gotten him out quicker. That’s the way I look at it. I want to get back in there with some big names.”
“My attitude has changed since the last fight. I had a reality check in that fight. But I stayed in the gym and worked on perfecting my craft.”
“My conditioning was great. I didn’t have a problem. It’s also a blessing to have so many Pro-Santa Ana crowd. We bring a big fan base wherever we go.”
Ruslan Madiyev (13-1, 5 KOs) of Los Angeles, Calif. defeated Ricky Sismundo (35-14-3, 17 KOs) of Los Angeles, Calif. via unanimous decision in an eight-round super lightweight battle. Madiyev won with scores of 78-74, 78-74 and 79-73.
“I didn’t have much time to prepare for this fight,” said Ruslan Madiev. “I will come back, and when I prepare well, you will see the difference.”
Jousce Gonzalez (9-0-1, 9 KOs) of Glendora, Calif. stopped Jorge Padron (3-4, 3 KOs) of Sonora, Mexico at 2:15 of the second round of a scheduled four-round lightweight bout.
“I’m my toughest critic. I give myself a 5 out of 10,” said Jousce Gonzalez.”There are a lot of things I could have done to get him out earlier, so that’s why I give myself a 5 out of 10.
“I feel good to be back in action. I want to be busy. I didn’t take many shots today, so I’m ready to come back soon.”
Jonathan Esquivel (11-0, 9 KOs) of Anaheim, Calif. defeated Gregory Clark (4-4-1, 1 KO) of Washington, D.C. via knockout in the first round of a super middleweight fight originally scheduled for six rounds. Esquivel won with time of 1:40 in the aforementioned round.
“It feels great to have fought here at the Dignity Health Sports Park,” said Jonathan Esquivel. “This is a place where many legends have fought.”
Vargas vs. Kameda was a 12-round fight for the WBC Super Bantamweight World Title presented by Golden Boy in association with Promociones del Pueblo and TGB Promotions. The event was sponsored by Tecate, “THE OFFICIAL BEER OF BOXING,” and Hennessy “Never Stop. Never Settle.” The event took place Saturday, July 13 at Dignity Health Sports Park and was streamed live on DAZN