GRAND PRAIRIE, TEXAS (June 26, 2019): Rising knockout artist Vergil Ortiz Jr. (13-0, 13 KOs) will return to his hometown of Grand Prairie, Texas to face former world title challenger Antonio “Relentless” Orozco (28-1, 17 KOs) in a 10-round main event in the welterweight division. The card will be utterly stacked with Golden Boy prospects and contenders, most of whom are from the Lone Star State.The event will take place on Saturday, Aug. 10 at The Theatre at Grand Prairie in Texas and will be streamed live on DAZN. 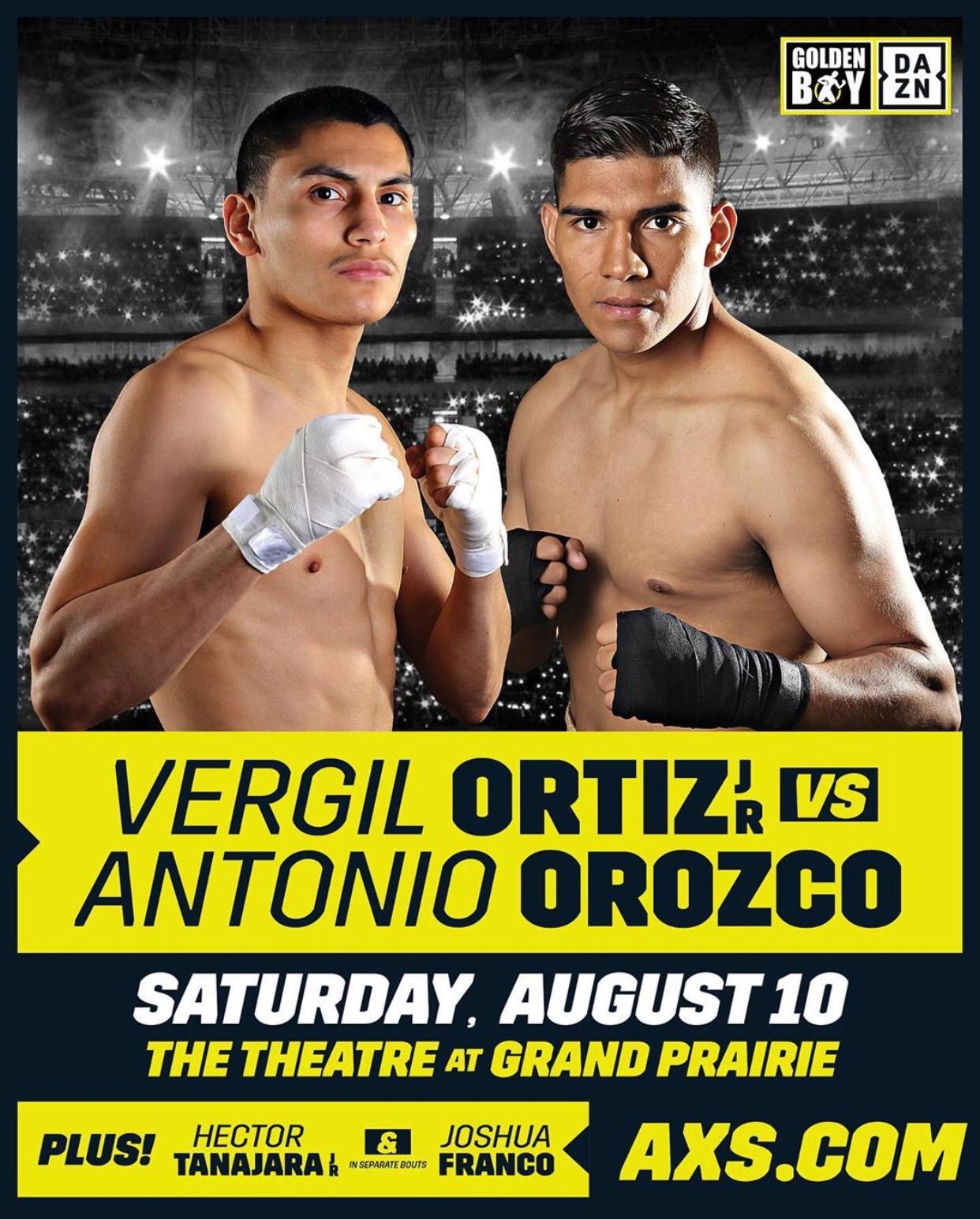 “In his fight against Mauricio Herrera, Vergil Ortiz Jr. went from being the very best prospect in boxing to a serious contender in just three rounds,” said Oscar De La Hoya, Chairman and CEO of Golden Boy. “Ortiz has dynamite in both hands as shown by the way he easily handled Herrera, who had never been stopped before in his career. On the other hand, Antonio Orozco has the capabilities to ruin Ortiz’s homecoming party as he is one of the best contenders to come out of the 140-pound division. Fans can expect a crazy fight for as long as it lasts, so don’t miss it either in person or live on DAZN. We’ll also be presenting a full card of our prospects and contenders from the Texas area, so it will be a complete night of action!”
Since debuting as a professional in 2016, Ortiz Jr. has never heard the final bell of a fight, and it doesn’t look like he’ll be hearing it anytime soon. Ortiz Jr., who has his roots in Michoacan, Mexico, will return after a stunning third-round knockout victory against Mauricio “El Maestro” Herrera in the co-main event of Canelo vs. Jacobs. Ortiz Jr. is excited to headline in his hometown for the very first time against a very tough challenge in Orozco.
“This will mean a lot to me,” said Ortiz Jr. “This is my first time fighting in my hometown, so this is very special to me. I know Antonio Orozco. Since I had about three professional fights, I kind of knew that we’d be facing each other at some point. He definitely is a tough fighter. He only has one loss, which was against Jose Carlos Ramirez, a world champion. It will be a tough fight. They don’t call him ‘Relentless’ for nothing. The fans are going to win in this fight. I have a lot of supporters in Texas, especially in my hometown, and they have been wanting to watch me fight. I know there will be a lot of people talking about it, so I wouldn’t be surprised if it’s a full house.”
Orozco is a 31-year-old contender who has defeated the likes of KeAndre “The Truth”
Gibson, Humberto “La Zorrita” Soto and Emanuel “Tranzformer” Taylor. The native of San Diego, Calif. participated in his first world title opportunity against WBC Super Lightweight Champion Jose Carlos Ramirez in September 2018. Though unsuccessful, Orozco demonstrated his toughness, and he promises to return to title contention if successful against Ortiz Jr.
“My manager called me and offered me this fight,” said Orozco. “As soon as I heard the name, I didn’t hesitate. This is a big opportunity to showcase my skills and my Mexican style. Honestly, I’m ready to derail the dreams of Vergil Ortiz Jr. On August 10, I will remind everyone why I deserve another shot at the title.”
Hector “El Finito” Tanajara (17-0, 5 KOs) of San Antonio, Texas will defend his USNBC Lightweight Title in a 10-round clash.
Joshua “The Professor” Franco (15-1-1, 7 KOs), the unified NABF and WBA International Bantamweight Champion of San Antonio, Texas, will defend his titles in a 10-round fight.
Alex Rincon (6-0, 5 KOs), the hard-hitting southpaw of Dallas, Texas, will fight in a six-round battle.
Travell “Black Magic” Mazion (14-0, 12 KOs) of Austin, Texas will participate in an eight-round super welterweight clash.
George Rincon (6-0, 3 KOs) of Dallas, Texas will return in a six-round super lightweight battle.
Newly-signed Golden Boy prospect Tristan Kalkreuth of Duncanville, Texas will make his professional debut in a four-round light heavyweight fight.
Opponents for this card will be announced shortly.
Ortiz vs. Orozco is a 10-round welterweight fight presented by Golden Boy. The event is sponsored by Tecate, “THE OFFICIAL BEER OF BOXING,” and Hennessy “Never Stop. Never Settle.” The event will take place on Saturday, Aug. 10 at The Theatre at Grand Prairie in Texas and will be streamed live on DAZN.
Tickets for Ortiz vs. Orozco go on sale Thursday, June 27 at 10:00 a.m. PT / 12:00 p.m. CT. Tickets are priced at $125, $75, $50, and $30, plus applicable taxes, fees, and service charges. Tickets can be purchased at goldenboytickets.com, AXS.com, by phone at 888-9AXS-TIX (888-929-7849), and at The Theatre at Grand Prairie Box Office (Monday -Saturday 11:00 am CT – 3:00 pm CT or 972-854-5076).