MARIO BARRIOS – “I might be the boogeyman of the division”

Mario Barrios may be the next world champion at super lightweight.
The 24-year-old boxer-puncher they call “El Azteca” served notice to the world last month when he took on Juan Jose Velasco.  Velasco was coming off an eighth-round TKO loss to current WBA titlist Regis Prograis. Barrios knocked him out in two rounds with a sensational left hook to the liver.
The 5-foot-10 Barrios (24-0, 16 KOs) has flattened eight 140-pound opponents since adding trainer Virgil Hunter to his corner. 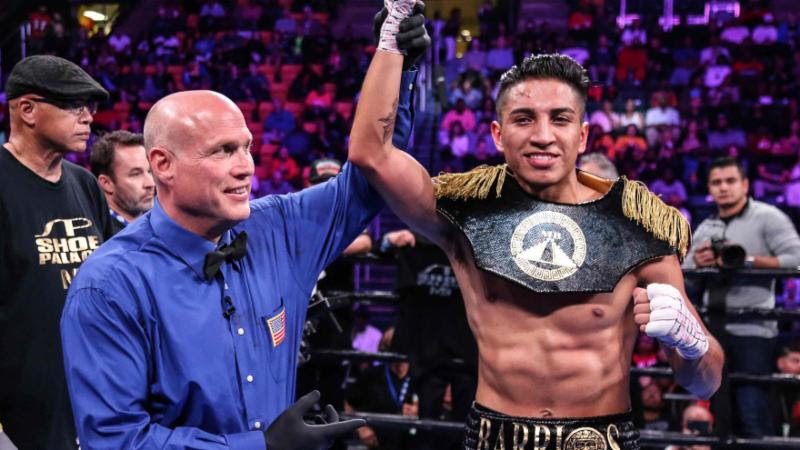 Can you discuss your success under trainer Virgil Hunter?
I’ve seen a huge improvement since moving to 140 and working with Virgil, especially in my boxing IQ. I’m absorbing as much knowledge and insight as I can.
There are subtle changes like using my jab properly. I’m fighting at that world championship level.
I don’t go looking for knockouts, but I’ve been setting up good punches, dominating every fight and ending them early.
Was your goal to outperform Prograis against Velasco?
I saw some of Prograis’ fight with Velasco, who was getting a lot of punches off on Prograis. But that’s why we trained so well for Velasco knowing the challenge we had before us. I didn’t expect an early knockout. But I caught him on the sweet spot with that left hook to the liver and rib cage.
Being Mexican and from Texas, body shots are what people expect out of you. I’ve incorporated those since amateurs. They’re second nature for me. The shot was a result of my being patient and setting up everything off my jab.
With this knockout of Velasco, I made a huge statement showing the world I’m ready to step up. I want any of the world champions.
It doesn’t matter if it’s Maurice Hooker, Josh Taylor, Regis Prograis or Jose Ramirez, I wanna show I’m a complete fighter, not just a boxer or a puncher, but all-around. I have size, speed, boxing ability and power.
Since beating Velasco, I’ve said I wanna fight any of the champions, but I don’t hear my name coming out of their mouths. I might be the boogeyman of the division to them. My time is coming. I know I can take any one of them.
How does a fight break down with Prograis?
Regis Prograis has the WBA, and he’s ranked No. 1 right now, so that’s who I want. I’m from San Antonio and he trains in Houston, so a fight with him would be big
Given our styles and the power and speed that we both have, I know it would be an action-packed fight that isn’t likely to go the distance.
I commend Josh Taylor on his dominating performance over Ivan Baranchyk. I think a fight with Taylor would be a chess match but definitely a good one.
Jose Ramirez would be a great fight for the Mexican base and boxing fans in general who want to witness an action-packed war.
Maurice Hooker being from Dallas, that’s another big fight for Texas. Hooker [at 5-foot-11] has good size for this weight class as do I…