LAS VEGAS (June 12, 2019) – Ten minutes before the press conference was set to begin, Tyson Fury waltzed onto the stage at the David Copperfield Theater and started the proceedings early. The Tyson Fury Show had officially hit the Vegas Strip.

He commented on his challenger’s good lucks and engaged in a pose-off with his adversary before the formal press conference got underway.

This is what the main event participants and Top Rank chairman Bob Arum had to say. 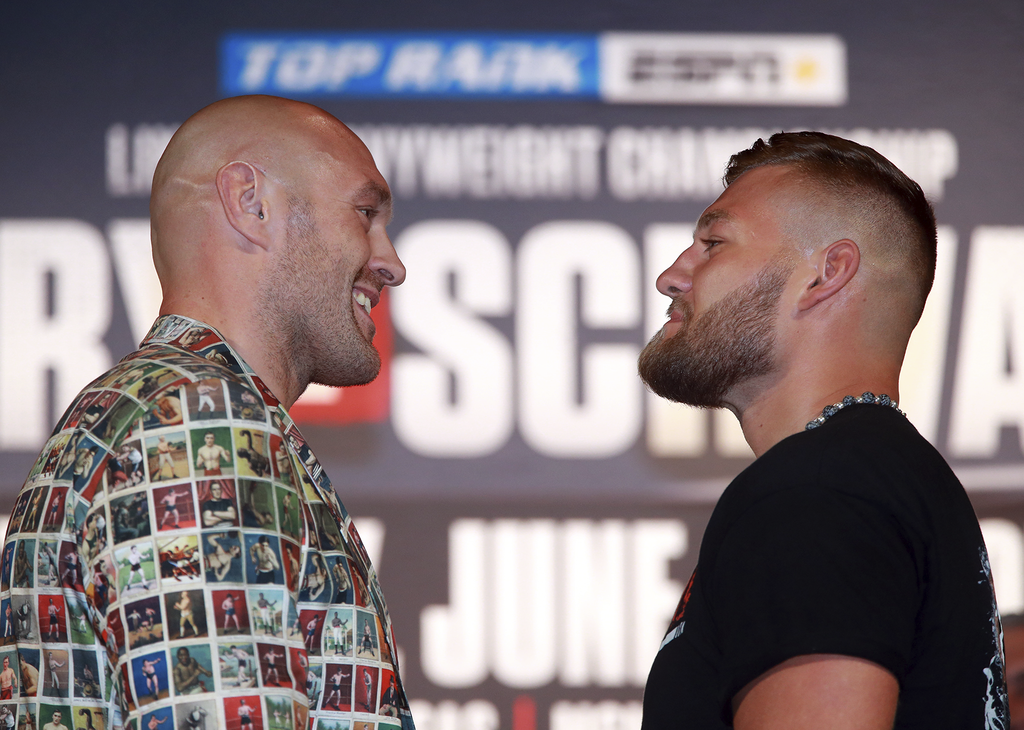 PHOTOS BY: MIKEY WILLIAMS FOR TOP RANK PROMOTIONS
Tyson Fury On the response of the American people to him
“I feel like the crowd has warmed to me. Everyone has been very welcoming. The American people, all different types of people, have been coming up to me, people from all over the world here in Vegas. People who don’t speak English, people who don’t even watch boxing. It’s quite humbling, to be honest. It’s a very great experience to be here, Las Vegas, MGM Grand. It’s where all the great fights happen. Seeing your face on all the movie screens and posters is great.”

“I believe the fight with Wilder only helped my profile here in the United States, and here we are again, only a few days away from the biggest fight of my life.”

On his public battle with mental awareness

“I talk about mental health a lot because it’s very important to me. Only 18 months ago, I was in a very, very dark place. I just wanted to prove to people that there is a way back. You can come back from anything. Nothing is impossible, and if you’d seen me a time ago when I was very heavy and very unwell… I love to inspire people. to get better and change their lives as I did mine. And I’m living proof that anyone can change.”

“I was down and out. I have my family right here, and even those guys thought I was gone. There was no return for ‘They Gypsy King.’ No more. He was finished. I dusted myself off, got back on the road, got back mentally well, and me, {trainer} Ben {Davison} and the whole team, we worked very hard for a long time to get to this position.”

“I am living the dream. That’s why I’m so happy, so positive all the time. I’m one of the only people who is living what they want to do. There is nothing else that I wanted to do. As a kid, I wanted to be heavyweight champion of the world. So now, everything is a bonus. I wake up every day, enjoy life, and take life as it comes.”

Tom Schwarz
“Training for this fight was very good. We had hundreds of sparring partners to prepare for this big fight. My time is now!” On adding Roberto Norris to his corner

“He makes me train harder and that has made me a stronger fighter. I have also learned new boxing skills with him. He has taught me the American style.”

“Top Rank is a great company and Bob Arum is the God of all promoters. We also know Frank Warren very well. He is a great promoter, too. The eyes of the world will be on Las Vegas this Saturday night and for that, I’m very honored and excited. It will be a great fight and I’m coming to win it and shock the world.” 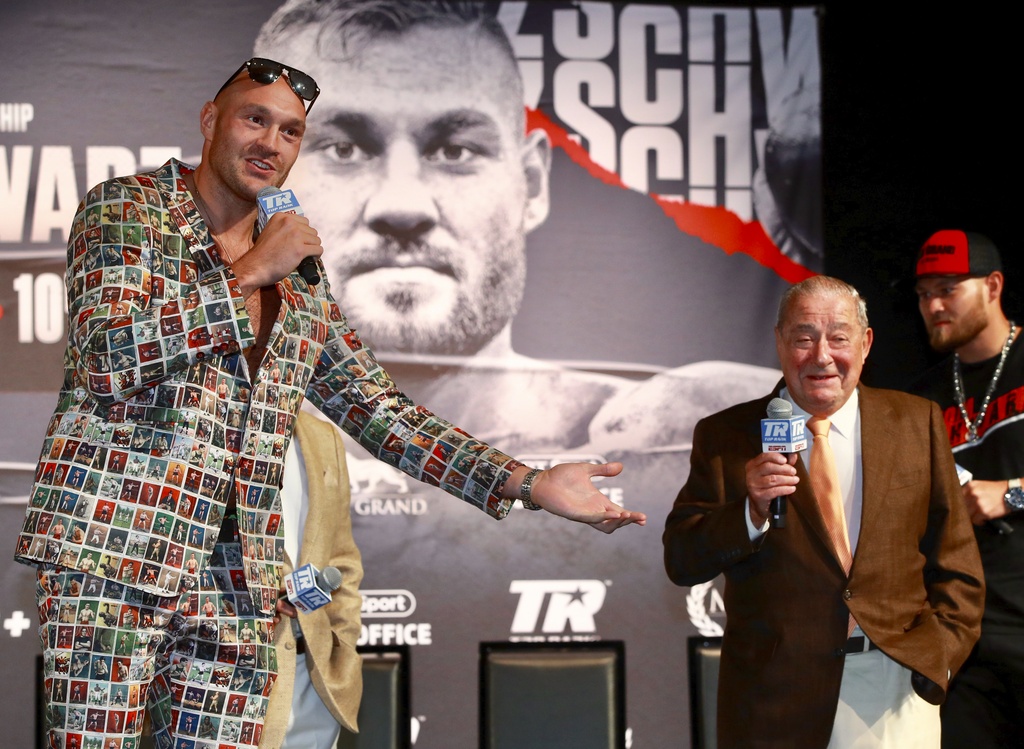 Bob Arum
“I am absolutely delighted with this reception. The job of a promoter, as Frank {Warren} would attest, can be very difficult. Once in a while, many times, you get guys who are reluctant to speak to the press. You gotta give them scripts as to what to say. With Tyson Fury, all you have to do is get him into place so that he can meet with the press, he can meet with the public. You don’t have to tell him what to say because he knows how to reach the public and reach the press. It’s really been a delight to do this promotion. I’m a big fan of German boxing, and I know Tom – who many of you have not heard of – is a tremendous fighter. Our matchmakers went over the tapes of his 24 victories and some of his amateur tapes, and we realize what a tremendous fighter he is.” ESPN+, 10 p.m. ET/7 p.m. PT Tyson Fury (champion) vs. Tom Schwarz (challenger), 12 rounds, Fury’s Lineal world heavyweight title,

FURY vs. SCHWARZ, the 12-round fight for the lineal heavyweight championship of the world, is presented by Top Rank in association with Frank Warren’s Queensberry Promotions and SES Boxing, and is sponsored by Geico.  FURY vs. SCHWARZ will take place Saturday, June 15, beginning at 10 p.m. ET/7 p.m. PT at MGM GRAND GARDEN ARENA, and will be produced by Top Rank and ESPN and streamed live on ESPN+.