ATLANTIC CITY, N.J. (June 11, 2019): Golden Boy’s stable has just gotten even better as WBC Super Middleweight World Champion Franchon “The Heavy-Hitting Diva” Crews-Dezurn (4-1, 1 KO) has signed a promotional agreement with the company.
Crews-Dezurn will return in a 10-round fight against a soon-to-be-announced opponent on the undercard of Ballard vs, Espadas.The event will take place on Thursday, June 20 at Ocean Casino Resort/Ovation Hall in Atlantic City, N.J. The event will be streamed live globally on Facebook Watch via the Golden Boy Fight Night Page.
Crews-Dezurn is a native of Virginia Beach, Va. who currently lives in Baltimore, Maryland. She is a former amateur standout who competed at a national and international level. In 2016, Crews-Dezurn made her professional debut against two-time Olympian Claressa “T-Rex” Shields, who was also debuting at the time. Though she lost a tough and close battle, Crews-Dezurn would score three more victories before capturing the WBC Super Middleweight World Title via 10-round majority decision against Maricela “La Diva” Cornejo. 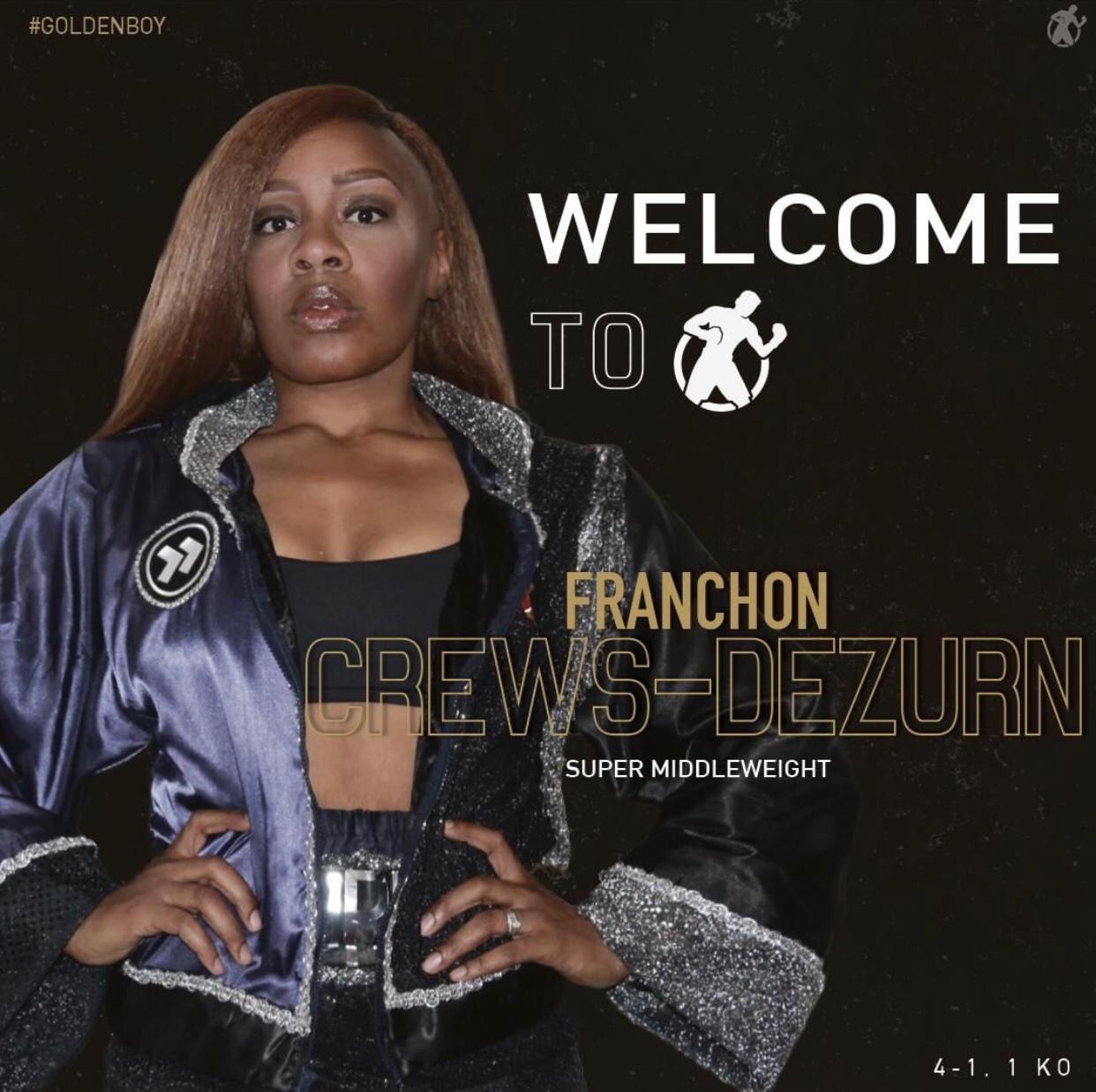 “I’m very excited to sign with Golden Boy as they are a Heavy Hitter in the boxing business,” said Franchon Crews-Dezurn. “Not only will I be working with legendary fighters and now business men like Oscar De La Hoya and Benard Hopkins but being on the roster with vast talents like Canelo gives me something to aspire to as a renaissance woman. You can see Golden Boy believes in women’s boxing. They gave me my first shot at a title on national TV.”
“I look forward to putting on some great fights in the future for the fans while building my legacy. I’m not huge on birthdays [which is on June 13], but this is the best gift a girl could ask for which is the opportunity to live out my dream and create HERstory! Lastly for the people who think I just came out of nowhere and became a world champion, The Heavy-Hitting Diva is here to make believers.”
“Yet another world champion has joined our great stable,” said Oscar De La Hoya, Chairman and CEO of Golden Boy. “But Franchon Crews-Dezurn is special because she is a renaissance woman. Aside from being the WBC Super Middleweight World Champion, she is also a talented singer, songwriter, designer and motivational speaker. She will undoubtedly also be our ambassador as we continue to open up more opportunities for women in the sport of boxing.”
“I’d like to welcome Franchon Crews-Dezurn to Golden Boy,” said Bernard Hopkins, Golden Boy Business Partner. “I believe that she will one day be the unified champion. We are looking forward to her showing the world that she has all the ingredients to become an undisputed world champion. Congratulations!”
In the co-main event, Eddie “Eboy” Gomez (22-3, 12 KOs) of the Bronx, N.Y. will return in a 10-round welterweight fight against Saul “Navajo” Corral (29-13, 19 KOs), who is originally from Sonora, Mexico but fights out of Douglas, Arizona.
Mike “Yes Indeed” Reed (24-2, 13 KOs) of Washington, D.C. will battle in an eight-round super lightweight clash against Angel Hernandez(15-13-2, 9 KOs) of McAllen, Texas.
Jaba Khositashvili (4-0, 2 KOs) of Akhalkalaki, Georgia will take on Gabriel Pham (10-1, 5 KOs) of Atlantic City, N.J. in a six-round super middleweight bout.
George Rincon (6-0, 3 KOs) of Dallas, Texas will participate in a six-round super lightweight fight against Greg Young Jr. (4-1, 1 KOs) of Hoover, Alabama.
Dan Murray (4-2) of Lanoka Harbor, N.J. will fight in a four-round super lightweight clash against Leonardo Kenon (3-5, 1 KOs) of Quincy, Florida.
Rishard Muhammad of Atlantic City, N.J. will make his professional debut in a four-round featherweight battle against Ronald Alston (0-2) of Wilson, N.C.
Ballard vs. Espadas is a 10-round middleweight fight presented by Golden Boy. The event is sponsored by Tecate “THE OFFICIAL BEER OF BOXING” and Hennessy “Never Stop, Never Settle.” The event will take place Thursday, June 20 at Ocean Casino Resort/Ovation Hall in Atlantic City, N.J. The fights will be streamed live globally on Facebook Watch via the Golden Boy Fight Night Page.
Tickets for Ballard vs. Espadas are on sale and are priced at $100, $50, $25, and $15, not including applicable service charges and taxes. Tickets are available at www.ticketmaster.com.