“I think sometimes as a team or promoter you have to pinch with yourself whenever you’re at Madison Square Garden, we have been lucky enough to stage two world championship events at the Theatre, but Matchroom Boxing will make our debut at Madison Square Garden as a promotional company and to do it for the unified Heavyweight championship in an absolute honor, and to do it while representing the Heavyweight Champion Anthony Joshua is an honor as well. 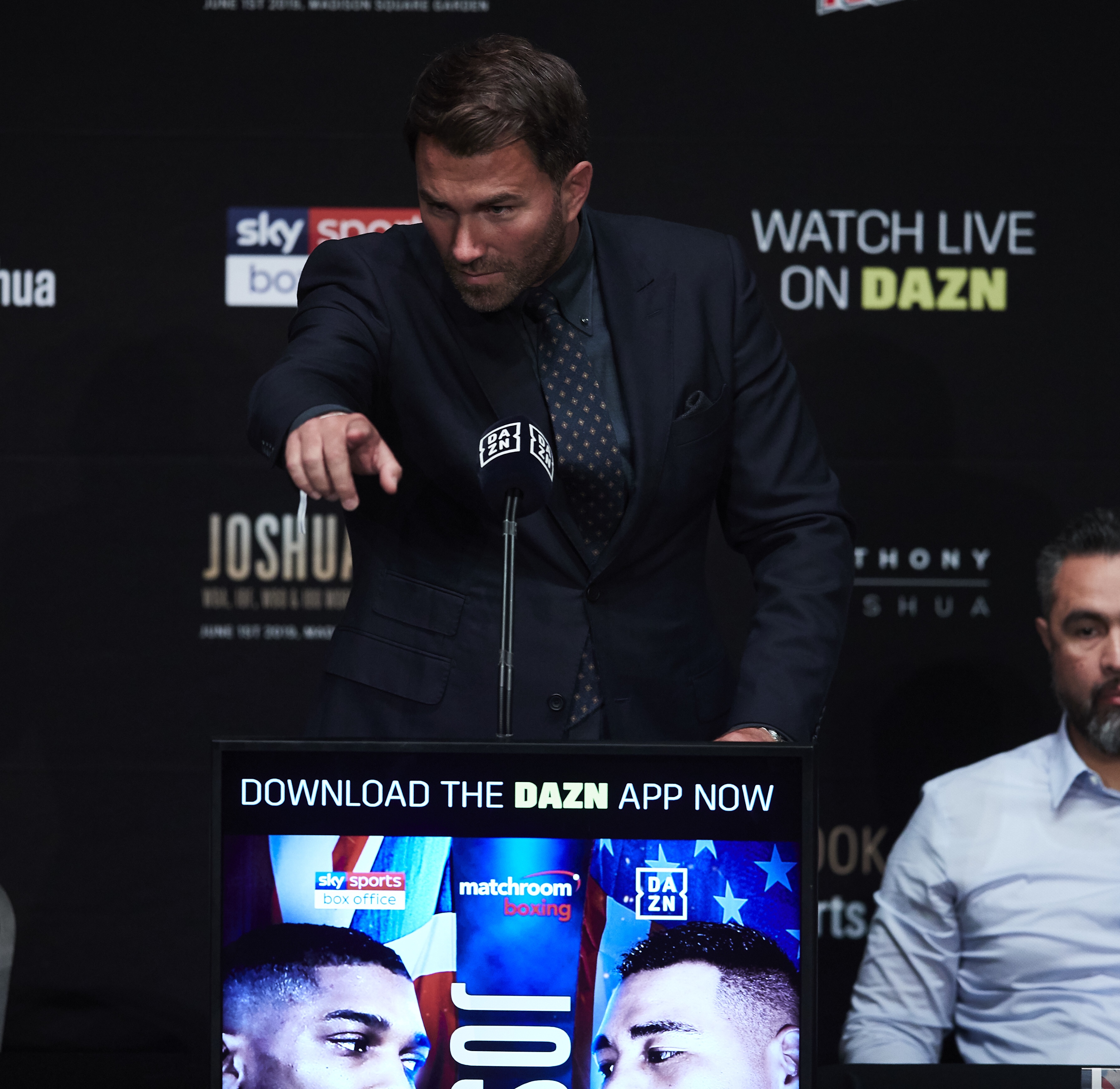 “This week has been incredible, and part of the development of Anthony Joshua the fighter and the brand is to take him worldwide and keep growing the incredible profile around the world.

“We were here a few months ago, what feels like yesterday, when another heavyweight decided to shove Anthony Joshua on the stage in front of you. He talked the talked, but couldn’t help himself. He couldn’t bring himself to try genuinely and honestly fight the unified heavyweight champion of the world.  Once the three positive drug test came in we searched for a new opponent, there wasn’t any instructions, it was whoever we wanted. Someone sent me a direct message, I’m fighting on Saturday, give me this fight, I’ll fight harder than any other person mentioned and I will give you a better fight and beat Anthony Joshua. We saw him beat Alexander Dimitrenko, discussions continued, and we knew the deal was important, and had a burning desire to become the first Mexican Heavyweight champion. We respect Andy for stepping up and taking this fight and we know we’re in for a hell of a fight on Saturday night.”

“Thanks to the media in attendance today. Many of you have traveled thousands of miles to be here and I think that speaks to the significance of Saturday’s event. Thanks too to Joel Fischer and his team here at the Garden for their hospitality. Great partners as always. This is the first event in a 3-week DAZN residency at MSG – we’ll be giving Billy Joel a run for his money at this rate.

“AJ was there for DAZN at the beginning of our American journey and now we’re proud to be here for his – as the exclusive broadcaster of his fight against a highly motivated Andy Ruiz. Not just in the U.S. but in all 9 DAZN markets across four continents.

“Since AJ debuted on DAZN in September, a lot has changed within boxing. We now have six of the pound-for-pound top 10 boxers in the world on DAZN – many of whom are also the biggest draws in the sport like Canelo Alvarez, Gennadiy Golovkin and, of course, Anthony Joshua.

“We’ve also featured some of the sport’s top women – Katie Taylor, Amanda Serrano and Claressa Shields – as well as its hottest young prospects like Devin Haney and Ryan Garcia.

“At a time when many are focused on how the boxing landscape is fractured, we’re working with a growing number of promoters to cut through the noise and deliver the best fights for fans. Matchroom, Golden Boy, GGG Promotions, the World Boxing Super Series are all on DAZN. It’s the best boxing schedule of any platform and without doubt the best value.

“But we’re not done. We’re hard at work, planning the rest of 2019 to make sure we continue to overdeliver for our subscribers.”

“Thanks Eddie. There has been ups and downs over the 30 years Sky have been committed to boxing but I think it all changed in 2012 when this man struck Olympic gold in London. Eddie become our exclusive partner at Matchroom, we have a fantastic relationship with them. When AJ signed with us and with Matchroom in 2013 it began a new venture. We had the likes of Ricky Hatton, Lennox Lewis, Joe Calzaghe, David Haye, Carl Froch, so many others over the years. Anthony brings something different to the table, he brings huge charisma, really likability and a terrific talent inside the ring as well. A man that can sellout 90,000 at Wembley. It’s a pleasure being with him on this ride alongside his excellent team. Bring on Saturday night, there’s nothing like a fight in the Garden!”

“The sport is tough no doubt about it, but dedication, focus, and purpose gives me reason to return to the gym each time. I won this title in my 16th fight, I think when I was about three years into being a professional, and I wanted to take these challenges. Without overlooking Andy or his team at all, Andy knows what it’s like to be a fighter. When you have this opportunity in front of you and know what can come after, we naturally look past, so when I was fighting for that title, I was always looking for the next challenge, hoping to get to the next one. 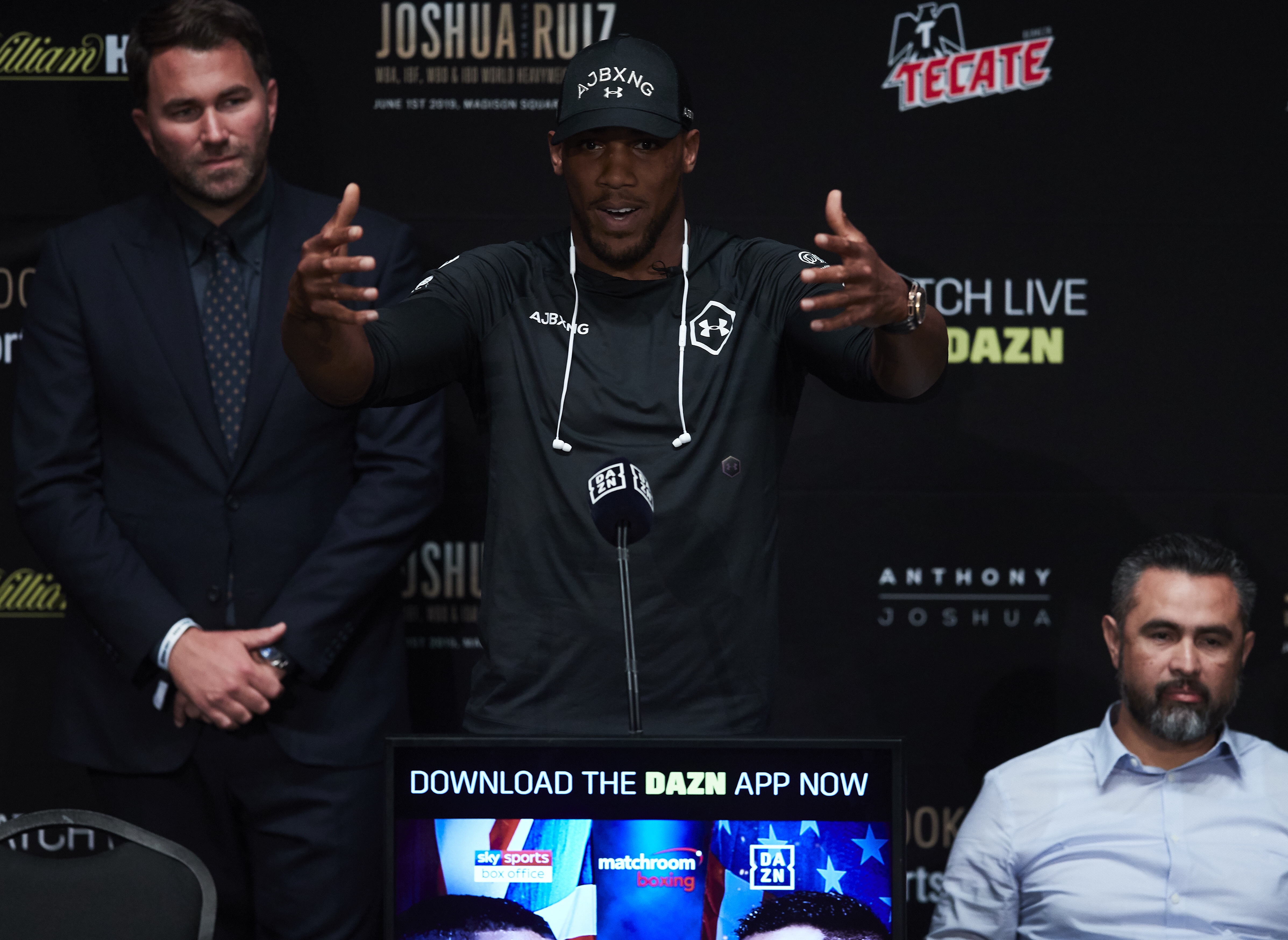 “Fighting Andy for me is just as dangerous as fighting Wilder or Fury because they both possess their own skills, so I have to take Andy deadly serious. I don’t overlook him at all, I respect him and respect his team, and I really respect he put his name on the dotted line to take this challenge. No challenge is easy, no matter what the bookers are telling you or the odd makers. Andy is going to come in here and give me a real good fight and cause problems, and it’s down to me as a champion to think smart, box clever, out box, out strength, and out muscle Andy Ruiz to get that win.

“No fight like after the fight when your hands are raised, your opponent has been defeated and thinking about being on a beach, or being with your family, and focus on the next challenge ahead. Right now I’m only champion till June 1 when I have to defend my titles. I’m currently the heavyweight champion of the world, but June 1 I put them in the air and they’re up for grabs. Let the best man win.”

“I’ll keep it short and sweet. Ruiz Jr was the best available contender when Jarrell Miller failed his drugs tests. Ruiz for me was the toughest challenge at that stage, we needed somebody that was going to motivate Anthony. There was a couple of names floated around that I don’t think would have motivated him and the camp would have become hard. AJ recognises him as a quality fighter. Technically he is sounds. He has a good coach. He was very close in the Parker fight. He is a world level fighter and a serious contender and that’s what Anthony Joshua is about. He wants to fight the best out there. Right now Andy Ruiz is the best out there for this date, that’s the challenge.

“Josh is ready. We went to Miami, it was fantastic. We worked really hard, four weeks we kept him locked up. We feel AJ is a deserving champion and will produce a fantastic performance in a great fight and will continue on and unify the division.”

“I’ve been waiting for this all my life, I’ve been training so hard since my last fight against Alexander Dimitrenko. This came at a perfect time to fight Anthony Joshua. Those belts look really shiny, look really good! I’m ready, I’m ready for June 1, I’m ready to become the first Mexican Heavyweight champion of the world. Ready to bring those belts back to Mexico, although they have never been to Mexico, but they will be on June 1. I have nothing bad to say about Anthony Joshua, he’s a champion, I’m a fan of him, I respect him, but inside the ring there won’t be any respect, no friends, and no fans. I’ll I can say is tune-in on June 1, it’s going to be a hell of fight, I’m going to give it all I got, and we’re going to win this for Mexico!” 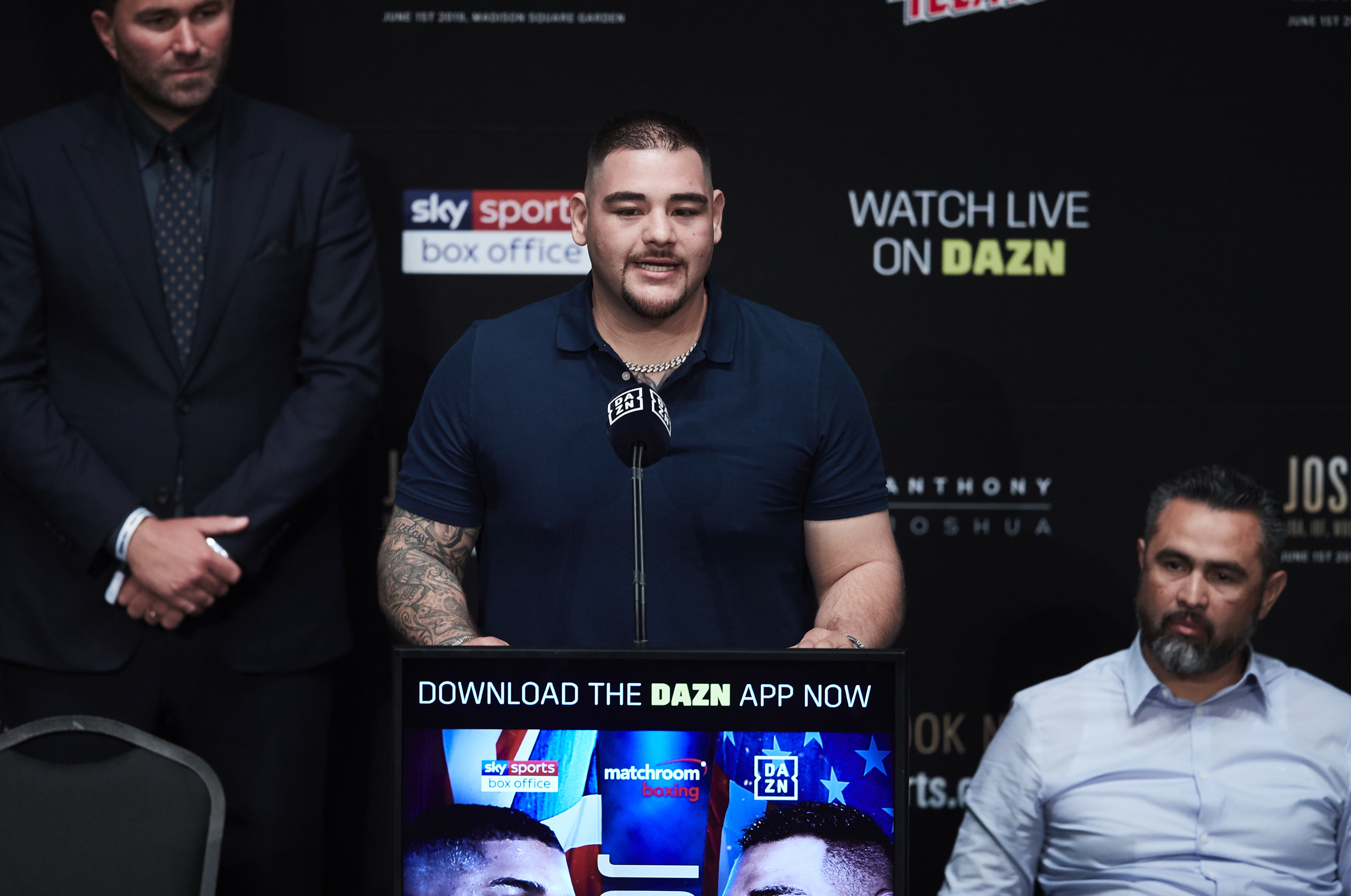 “Thank you Eddie. Thank you to the entire press that is here today. I don’t have too much to say. Ruiz is ready, he is ready for the challenge. We had a great camp. People think this was a short camp but in reality it wasn’t. We’ve been in the gym for pretty much 15 weeks and we had a tune-up fight in-between. Thank you to Anthony Joshua for giving us a chance. We’re going to give you a run for your money that’s for sure. We’re here to take that title, Viva Mexico!” 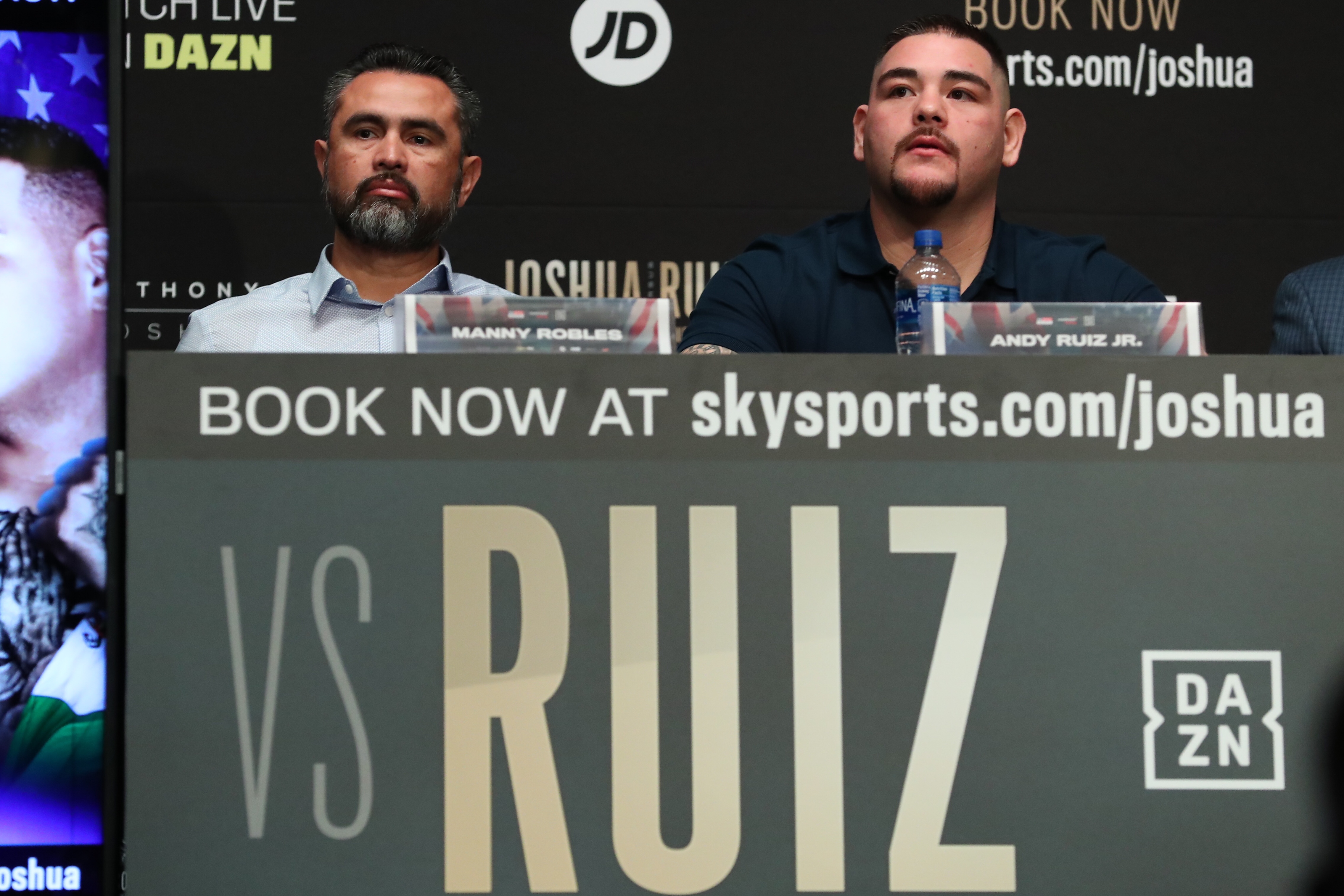