LAS VEGAS (May 29, 2019) — Jesse “Hollywood” Hart and Sullivan Barrera understand high stakes and are coming to Las Vegas, intent on cashing in with a potential world title shot on the line. Hart and Barrera will square off in a 10-round light heavyweight bout Saturday, June 15 at the MGM Grand Garden Arena. 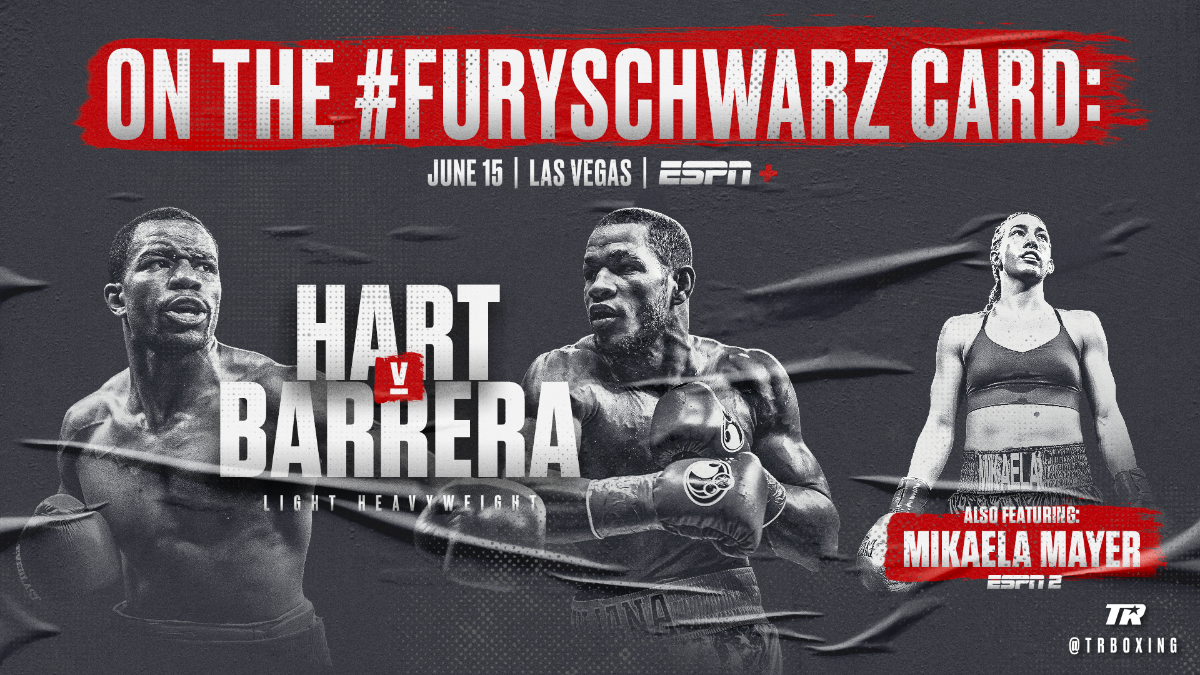 The undercard will be televised on ESPN2 and ESPN Deportes beginning at 7:00 p.m. EST/4:00 p.m. PST and will showcase undefeated 2016 Olympian Mikaela Mayer (10-0, 4 KOs), who will fight former world title challenger Lizbeth Crespo (13-4, 3 KOs) in a 10-round super featherweight bout.

Promoted by Top Rank, in association with Frank Warren’s Queensberry Promotions and SES Boxing, tickets priced at $500, $300, $100 and $50 are on sale now can be purchased online through axs.com, charge by phone at 866-740-7711 or in person at any MGM Resorts box office.

“On June 15, I’m coming to knock him out,” Hart said. “I refuse to lose. This is a legacy fight. I want the big names. I need a big name, and Barrera is the name. I don’t want to just win and coast to some boring decision. I’m coming to prove to the world that I can fight with these bigger guys. After I knock Barrera out, I’m coming for all the champions. The light heavyweights better watch out because ‘Hollywood’ Hart is here.”

“I am excited to face Jesse Hart, a great fighter who has also been in there with world champions,” Barrera said. “This is a must-win fight. Simple as that. Camp has been great for me, and I am looking forward to June 15. It’s going to be a great card, and I am going to show everyone in Las Vegas and watching on ESPN+ what I’m truly made of.”

Hart (25-2, 21 KOs) had two cracks at the WBO super middleweight world title, losing a pair of close decisions to longtime champion Gilberto “Zurdo” Ramirez. The Ramirez rematch, which took place last December in Corpus Christi, Texas, was a bruising affair that saw Hart rally in the second half before losing a majority decision. Eleven of Hart’s last 12 victories have come via knockout, and he hopes to carry that power up to the light heavyweight ranks. The Philadelphia native fought on the Floyd Mayweather Jr.-Manny Pacquiao undercard in 2015 at the MGM Grand Garden Arena, knocking out Mike Jimenez in six rounds.

Barrera (22-2, 14 KOs), from Cuba, defected to the United States in 2009 and turned pro later that year. The Miami-based bruiser won the first 17 bouts of his career before dropping a decision to pound-for-pound great Andre Ward. A perennial contender, Barrera holds victories over Joe Smith Jr., Vyacheslav Shabranskyy, Karo Murat and former super middleweight world champion Jeff Lacy. He challenged Dmitry Bivol for a light heavyweight world title last year and fought valiantly before being stopped in the 12th and final round.

Mayer is one of female boxing’s rising stars and has dominated her opposition as a professional. She went 6-0 in 2018, winning the NABF belt on August 25 with a shutout decision over the previously undefeated Vanessa Bradford. She made her 2019 debut February 15 in Hinckley, Minnesota, outclassing Yareli Larios over eight rounds. Crespo fought IBF featherweight world champion Jennifer Han in February 2018, dropping a tightly contested unanimous decision.

“It’s been a dream of mine to see women fighting alongside marquee names like Tyson Fury, and I’m grateful to be fighting at the MGM Grand on June 15,” Mayer said. “There’s still a lot the world hasn’t seen when it comes to my style and I’m ready to show everyone something special.”

In addition to Mayer-Crespo, the ESPN2/ESPN Deportes undercard broadcast will also include the following fights:

Use the hashtags #FurySchwarz and #HartBarrera to join the conversation on social media.

Queensberry Promotions has a long-term exclusive deal in the UK to promote boxing events on BT Sport, the sport broadcast platform of telecoms giant BT.

About ESPN+
ESPN+ is the multi-sport, direct-to-consumer video service from The Walt Disney Company’s Direct-to-Consumer and International (DTCI) segment and ESPN. It reached 2 million subscribers in less than a year and offers fans thousands of live events, on-demand content and original programming not available on ESPN’s linear TV or digital networks, along with premium editorial content.