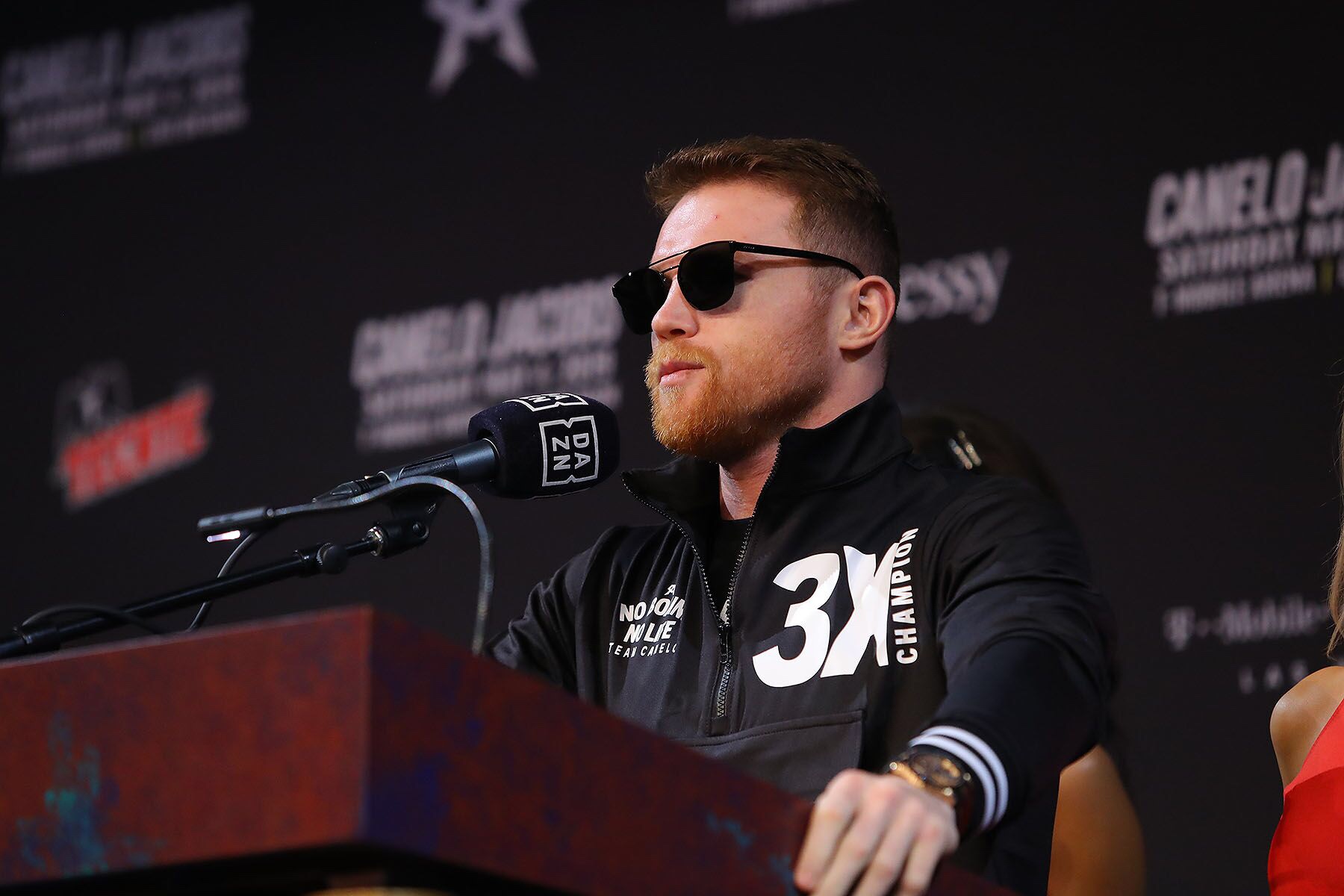 PHOTOS BY: TOM HOGAN FOR GOLDEN BOY PROMOTIONS
“Look, we’re just ready for Saturday. I’ll repeat to you – I’m ready, I’m ready to continue writing history like I always have.”
“I’m a fighter that’s fought all the styles. What he brings on Saturday night is going to bring the reaction out of me to counter whatever he brings.”
“In boxing, anything can happen. That’s including the knockout. If it’s there, trust me, I’m going to go for the knockout. I don’t care if he’s bigger, stronger, it’s never bothered me. I have the capability. I have the experience to overcome that and more.”
Daniel Jacobs, IBF Middleweight World Champion 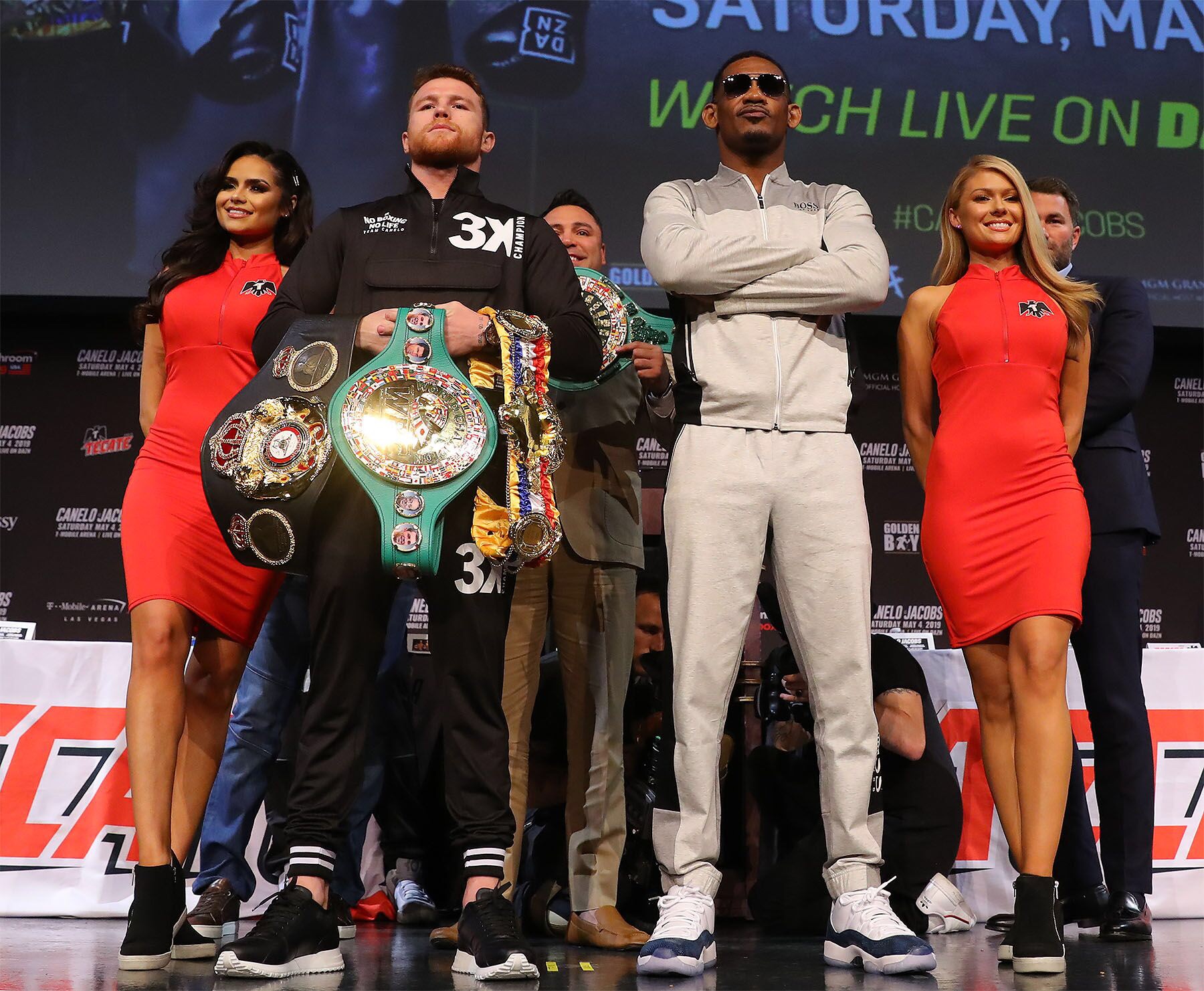 “I just feel as if the thirst for this fight is at an all-time high. We are only three days away from a mega fight and it’s such a privilege to be here right before this mega showdown. This is the opportunity of a lifetime for me and I’m mostly excited to get in there to show the world that I am the best middleweight of my generation. I finally have an opportunity to prove it, to go against Canelo Alvarez. You guys are going to see fireworks, masterful boxing, skills, dedication, persistence, and grit, most importantly.”
“I’m gonna talk inside the ring and let my fighting speak for itself. To Canelo – let’s put on a good show my brother.”
What has been tougher – preparing for this fight against Canelo or his fight against GGG? “I think mentally, Golovkin started out as the most devastating power puncher and boogeyman of the division. So mentally, he was tougher. Physically, this is much harder preparation because Canelo is very agile, he’s very fast, his offensive onslaught is at an all-time high. It’s a drastic difference. I thought I won the GGG fight and I assure you I will win this fight without controversy.”
“What will take the win will simply be me being the best version of myself. My physical advantages in itself can win me the fight, but I also have the mental capacity. I’m in my prime. I’m the only fighter Canelo has faced since Floyd Mayweather to be in his prime. I’m super confident and I’m going in there with the ability as well.”
Eddy Reynoso, Co-Trainer and Manager to Canelo Alvarez
“Saturday night we have a great fight in a division that’s given boxing historically great fights, and without a doubt Saturday night you’re going to have one of the greatest fights between two of the best fighters, two great champions. Ever since we began our career in boxing with Canelo, we always knew we’d have to take these types of risks in fights. These are the types of fights that catapult you to the top, to the elite level.”
“We have a tremendous challenge in front of us, a tremendous champion in Daniel Jacobs. But this year, our goal is to sweep the middleweight division and win all four belts, and Daniel Jacobs will not obtain that goal.”
Jose “Chepo” Reynoso, Co-Trainer and Manager to Canelo Alvarez
“I would like to give you a little bit of what happened in camp, all the hard work, all the intense work, the long hours of training. Because intensity is what we expect in the fight. And all this hard work is just what gives us the tranquility and the peace of mind that come Saturday night, when his hand is raised, it will reconfirm to everyone that he is the best middleweight on the planet.”
Andre Rozier, Trainer to Daniel Jacobs
“We had a fantastic camp. I’m just happy that Danny has finally reached his pinnacle. This is the point that he has strived to get to since he first began boxing. And, he is ready. I thank Canelo for accepting the challenge. I expect a fantastic battle but as it was just told – it is my birthday, and my son is going to present me with the best birthday present I could ever get by having his hands raised in victory.”
Keith Connolly, Manager to Daniel Jacobs
“A bunch of people have asked me if I’m excited for the fight. I’m most excited to see how this all turns out – the Daniel Jacobs story. I’ve known him for about 15 years since he was a teenager and it’s been an honor to see him grow from the boy that I first met to the man that he is now. This fight is happening at exactly at the right time. He’s physically mature but more importantly, he’s mentally mature. I expect him to embrace everything Saturday night and come out victorious.”
Oscar De La Hoya, Chairman and CEO of Golden Boy 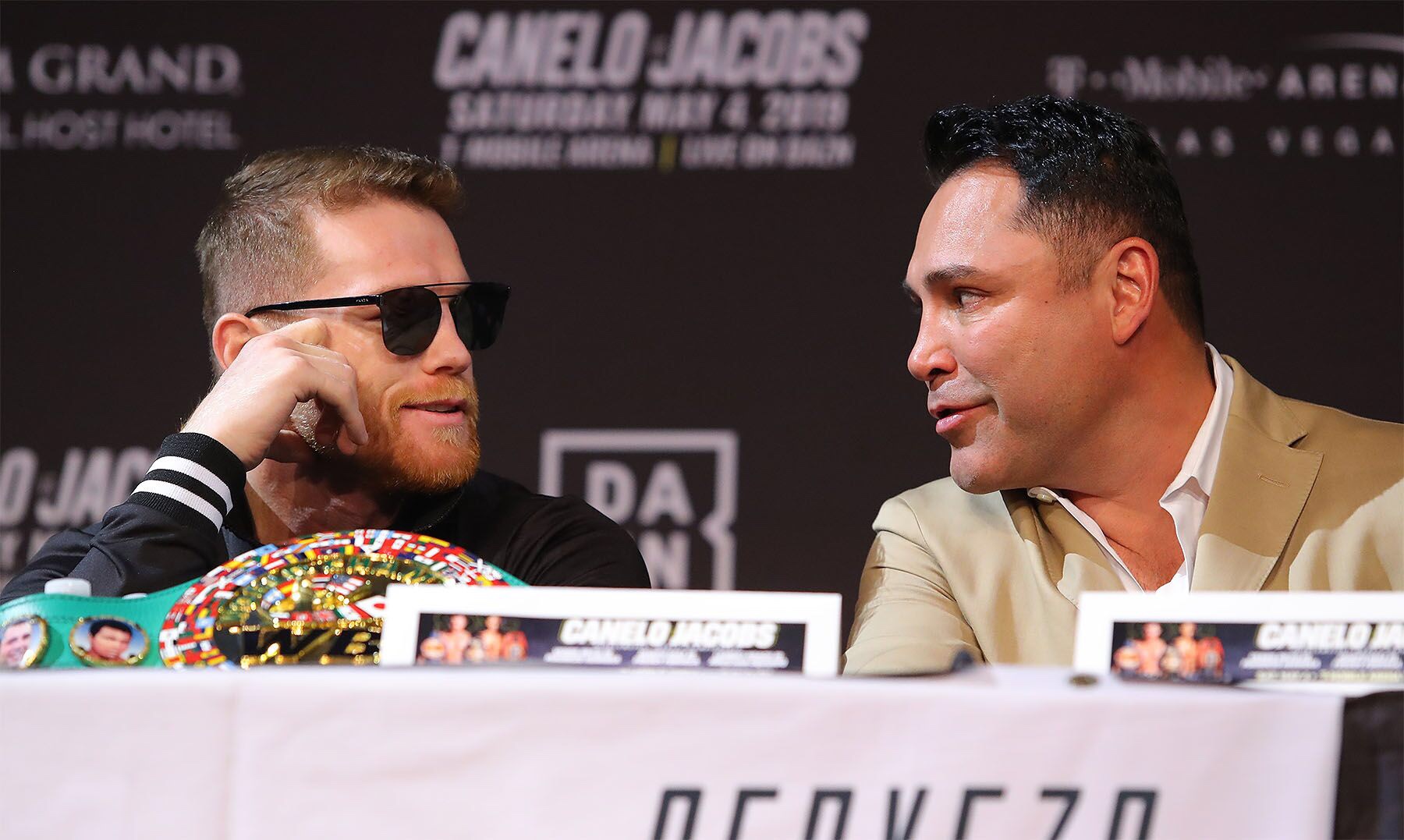 “This Saturday the #1 and #2 best middleweights on the planet will put everything on the line for one simple reason – to see who is the best. That is boxing at its finest. Indeed, this is the biggest fight in boxing featuring the biggest star in boxing in the biggest place for boxing on the biggest platform for boxing.”
“In life there are challenges that strengthen a person’s character and determine how this person will be remembered. Boxing is no different. The men we have before us today have faced tough challenges that few on the earth can relate too. Outside of the ring these men have already proven what they are made of, but this Saturday, these men will also determine who will be remembered as the best middleweight of their time the only way they know how – with their fists.”
“We are excited to be at the forefront of this new era of boxing with DAZN and look forward to continuing to make boxing more accessible and affordable for fans.”
“Saturday night we expect fireworks, we expect a war, we expect an amazing fight, with two gentlemen who have done an amazing job getting to this point.”
Bernard Hopkins, Golden Boy Partner and Future Hall of Famer
“To Danny Jacobs, I’d like to say this is a historical moment for your team. This is real special. It doesn’t happen in any division but I’m glad it’s happening now. To Canelo, Jacobs, well done. Now let’s take care of business.”
Eddie Hearn, Managing Director of Matchroom Boxing 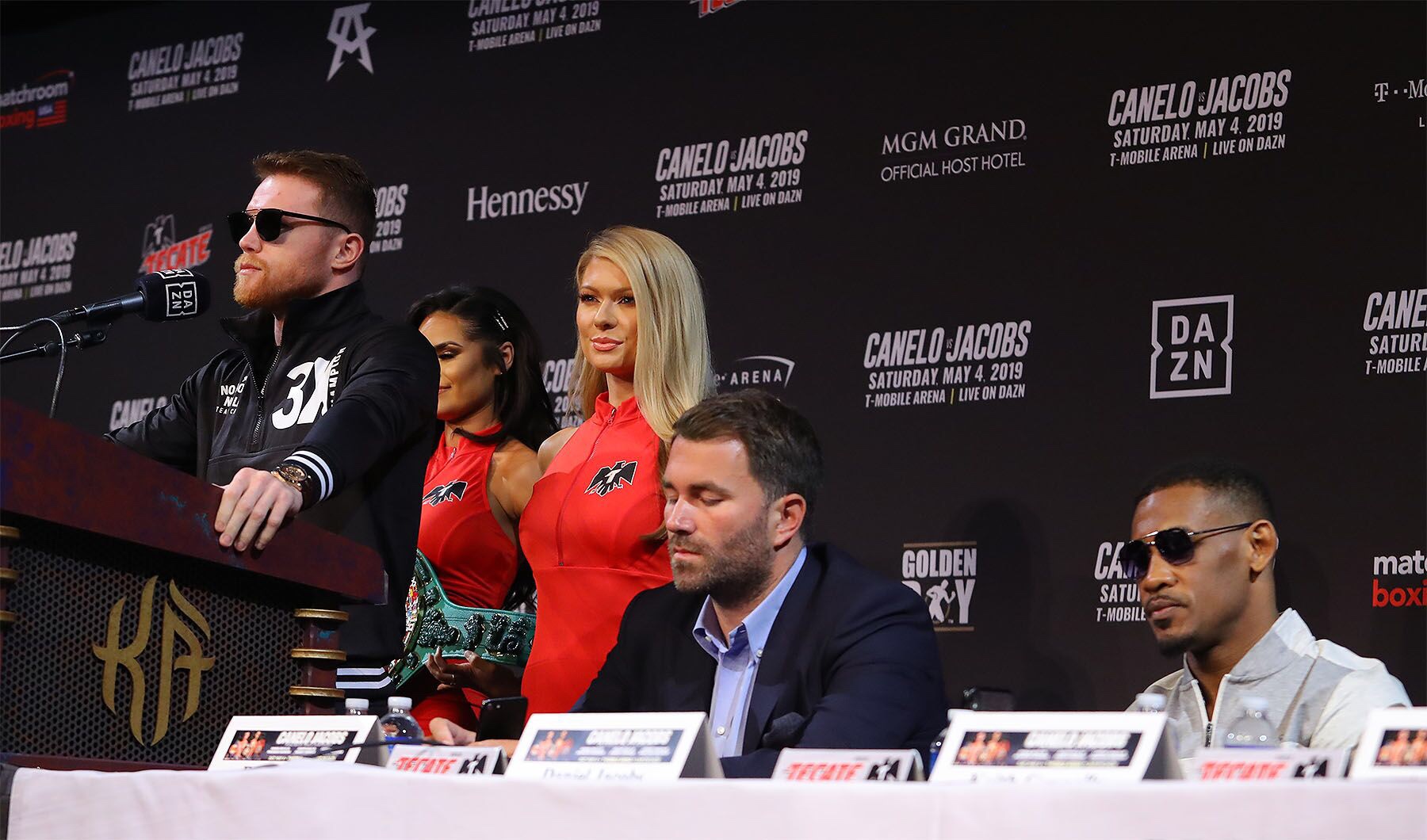 “We just want three simple things. We want to make sure Daniel Jacobs is victorious on Saturday night and we truly believe from the bottom of our hearts that he will be. We want to make sure we spread the gospel that great fights can be made. You can take risks. It’s fun. It’s called sport. That’s what we have to remember. Why these young men started was about greatness. It was how many belts they could gather. Could they reach the Hall of Fame? Could they create a legacy? And, I want the message of Daniel Jacobs to be spread worldwide. The illness and disease of cancer touches all of us. With Daniel Jacobs, you have a message of complete hope to anybody in suffering. Danie Jacobs was paralyzed. He was told he may never walk again, and certainly never fight again. Right now, I want this story to be spread worldwide to look at this fine young man and realize there is hope. If he can do it, you can do it. And on Saturday, I believe he’ll become victorious and become the unified champion of the world.”
“I know right now that this side has a feeling of excitement and nerves going into this weekend because this is a wonderful fight between two great champions and this is what the sport of boxing is all about.”
On the judges for Saturday: “I believe we have four outstanding officials across this fight who are going to give Daniel Jacobs and Canelo Alvarez a complete blank canvas and mutual respect.”
Joseph Markowski, Executive Vice President of DAZN North America
“To be clear, this fight would be on pay-per-view on any other platform – 80, 90, maybe even 100 bucks. But instead of offering this fight for $100, we’ll offer you an entire year of fights for $100 with our annual pass – incredible value in the next couple of months: Canelo vs. Jacobs on May 4, the World Boxing Super Series on May 18, Oleksandr Usyk’s heavyweight debut on May 25, Anthony Joshua’s U.S. debut on June 1, Gennady Golovkin’s return on June 8, and premium Bellator MMA. And that’s on top of the rest of our 100+ fight nights a year, including the fact that both Canelo and GGG will be back fighting on DAZN in the fall.”
“This weekend is massive for the middleweight division, a truly electrifying fight. It’s also massive for the DAZN business but most importantly for fight fans. On Sunday morning, instead of fans waking up to a $100 bill, those fight fans will have an entire year of content to look forward to. It’s a transformational moment.”
Canelo vs. Jacobs is a 12-round fight for the WBC, WBA, Lineal, Ring Magazine and IBF Middleweight World Titles presented by Golden Boy in association with Matchroom Boxing. Ortiz vs. Herrera is a 10-round welterweight fight presented by Golden Boy. The event is sponsored by Tecate, “THE OFFICIAL BEER OF BOXING” and Hennessy “Never Stop. Never Settle.” The event will take place Saturday, May 4, 2019 at T-Mobile Arena in Las Vegas and will be streamed live exclusively on DAZN.
Tickets for Canelo vs. Jacobs are on sale now and are priced at $2,505, $1,505, $1,205, $805, $605, $405, $305 and $200, not including applicable service charges and taxes. There will be a limit of 10 per person at the $2,505, $1,505, $1,205, $805, $605, $405, $305 and $200 price levels. To charge by phone with a major credit card, call 888-9-AXS-TIX (888-929-7849). Tickets also will be available for purchase at www.t-mobilearena.com or www.axs.com.