ALL ACCESS: WILDER vs. BREAZEALE Premieres Friday, May 10 On SHOWTIME 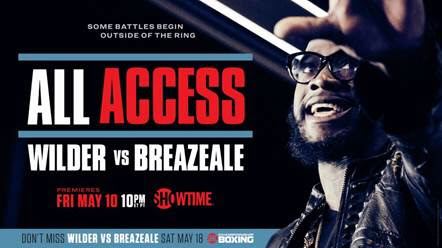 NEW YORK – April 23, 2019 – SHOWTIME Sports will chronicle heavyweight world champion Deontay Wilder’s ninth defense of his WBC title against mandatory challenger Dominic Breazeale with a new installment of ALL ACCESS, premiering Friday, May 10 at 10 p.m. ET/PT on SHOWTIME. The Emmy Award-winning series will peel back the curtain as two American heavyweights with a combined 90 percent knockout ratio prepare to square off Saturday, May 18 live on SHOWTIME from Barclays Center in Brooklyn.
ALL ACCESS immerses viewers into the lives and training camps of Wilder and Breazeale as they approach a grudge match that has been brewing for more than two years.  Filming for the series is underway in Tuscaloosa, Ala., and the Bay Area as the two 6-foot-7 heavyweights prepare to settle the score with Wilder’s coveted WBC title on the line.
ALL ACCESS DAILY will accompany the acclaimed original series with digital installments released throughout fight week on the networks’ social media channels. ALL ACCESS DAILY: WILDER vs. BREAZEALE will deliver the franchise’s signature intimate access and storytelling in the final days before the heavyweight showdown. New installments of the digital series will be available each day beginning Wednesday, May 15 on the SHOWTIME Sports YouTube channel and SHOWTIME Boxing Facebook page. A digital installment ofALL ACCESS EPILOGUE will provide an inside look at the intensity of fight night and capture all the sights, sounds and drama of heavyweight prizefighting.