LOS ANGELES (September 26, 2019) – Fighters competing in FOX Sports PBC Pay-Per-View and Prelims on FS1 and FOX Deportes action went face-to-face Thursday at a final press conference before they compete in action this Saturday, September 28 from STAPLES Center in Los Angeles.
The pay-per-view begins at 9 p.m. ET/6 p.m. PT and is headlined by the highly-anticipated welterweight title unification between IBF Champion Errol “The Truth” Spence Jr. and WBC Champion “Showtime” Shawn Porter. Facing off Thursday and entering the ring in pay-per-view action were Mario “El Azteca” Barrios and Batyr Akhmedov, who compete for the vacant WBA Super Lightweight Title, and all-action veteran contenders Josesito “The Riverside Rocky” Lopez and John Molina Jr., who meet in a welterweight attraction.
Thursday’s press conference also featured former three-time world champion Robert “The Ghost” Guerrero and Jerry Thomas, who square-off in a welterweight fight, and top prospect Joey Spencer and unbeaten Travis Gambardella, who go toe-to-toe in a super welterweight bout, all part of FOX Sports PBC Pay-Per-View Prelims on FS1 and FOX Deportes beginning at 7:30 p.m. ET/4:30 p.m. PT.
Tickets for the event, which is promoted by Man Down Promotions, TGB Promotions and Shawn Porter Promotions, are on sale now and can be purchased at AXS.com.
Here is what the fighters had to say Wednesday from the Wilshire Grand Ballroom II at the Intercontinental Hotel:
MARIO BARRIOS
“I appreciate everyone who made this fight happen. This is the biggest opportunity of my career and I’m excited. I had a great training camp and I’m prepared to put on a show for everyone watching. 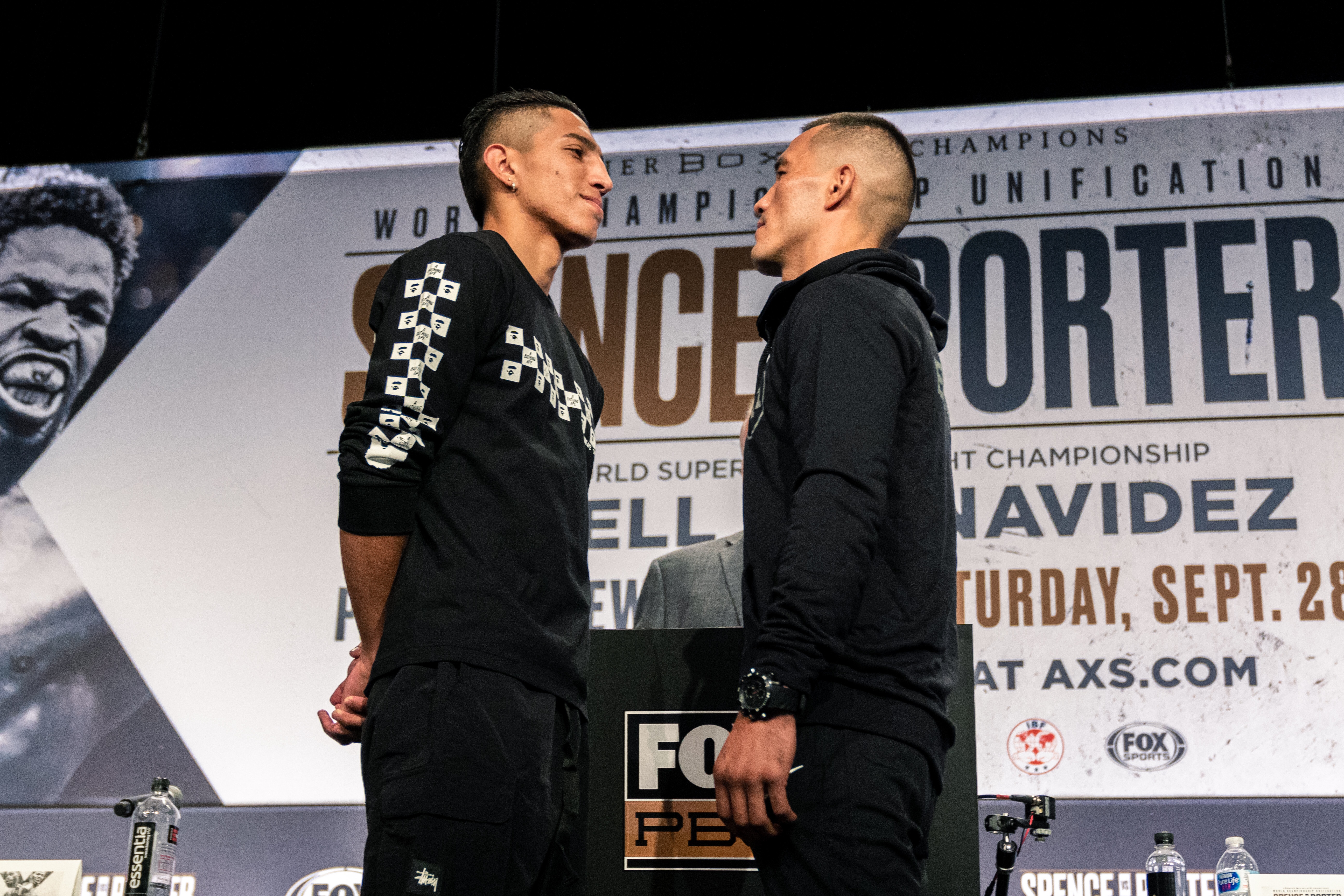 PHOTOS BY: RYAN HAFEY FOR PREMIER BOXING CHAMPIONS
“Winning this fight would mean everything to me. This has been a long road and I’ve been very patient. My opportunity is finally here and I’m not letting it slip by.
“His team pas put Akhemdov on the fast track to a world title, but it’s going to end up being their biggest mistake.
“I feel great at 140-pounds. This is the strongest I’ve felt in my career, which is why I have eight straight stoppages. I’m going in there with bad intentions for Saturday.
“I see myself right there with the champions at 140-pounds. I’m going to put them all on notice and the whole boxing world will have to take notice as well.
“The opportunity is in front of me right now. All I have to do is go out there Saturday night to take advantage.
“I have the ability to box or bang on the inside. I have speed, power and the size for this weight to be a problem. I’ve been ready for any of the top fighters.
“It’s been a long time since San Antonio had a world champion and having this chance to be the first in a while, makes it that much better. I promised my city a title when I turned pro, and it’s here now. No way I’m going home without that title.”
BATYR AKHMEDOV
“I’m not here to talk too much. I’m going to talk in the ring on Saturday night and have my hand raised. 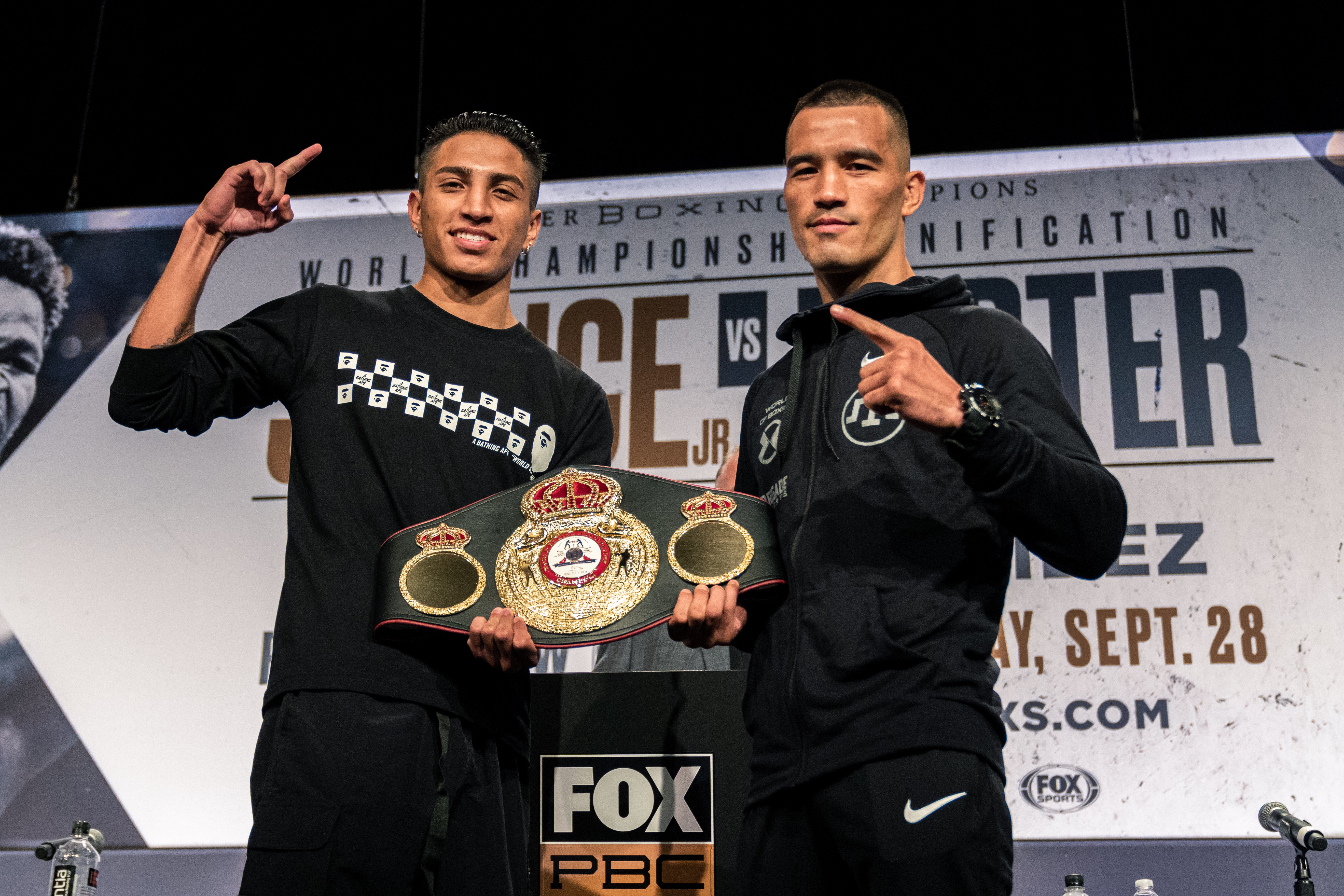 “This was a long road for me. Since my first day in boxing, I wanted to fight for the title. Now I’m one step away. I believe in myself and I believe that on Saturday I’m going to bring the belt home.
“I don’t know much about Barrios and I haven’t watched his fights. My team has studied him and will come up with a great game plan. My opponent will only fight the style that I allow him to fight.
“I have been doubted my whole career. People have always said that I was moving too fast in the pros. Now we’re on the eighth fight and I’ll prove everyone wrong again.
“Being in the desert in Southern California for training is great for me. The sparring is great and combined with the coaching from Joel and Antonio Diaz, it’s a perfect complete package.”
JOSESITO LOPEZ
“I’m really excited to be here. This is a great event. I can’t wait for this fight. Make sure you tune in early because this fight is going to be all action. I’m prepared for everything that’s going to happen on Saturday. 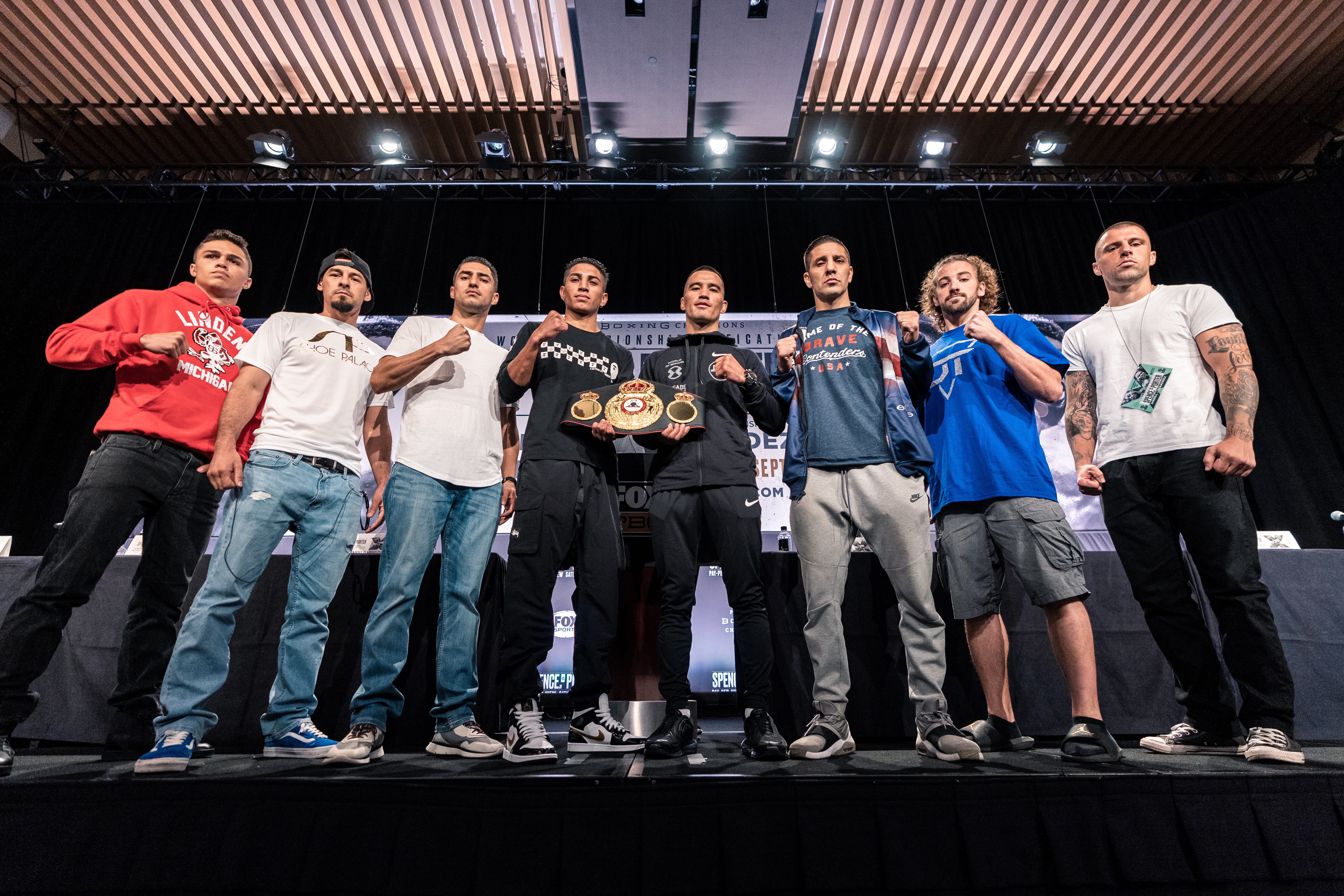 “I’m really pumped up to get it on Saturday. Right now I’m just laid back and relaxing. All the hard work is done. Weigh-in next then we’re ready to head into Saturday.
“I’ve been known for my left hook but I think I’ve made a lot of improvements in how I throw my right hand. It’s going to be a lethal combo.
“It’s going to be action and violence on Saturday night. I’m excited for it. I’m in this sport to be in marquee fights like this. This is going to be a fight everyone remembers.
“STAPLES Center is a place where I really got the opportunity to make a name for myself. Ever since then, I’ve been putting it all on the line, time and time again. By having a never give up attitude, anything is possible.”
JOHN MOLINA JR.
“I believe Lopez and myself are going to set the bar really high on fight night. It’s an all action fight. As a fan of the sport, I’d love to sit back and watch. We’re prepared and ready to go give everyone a great show. 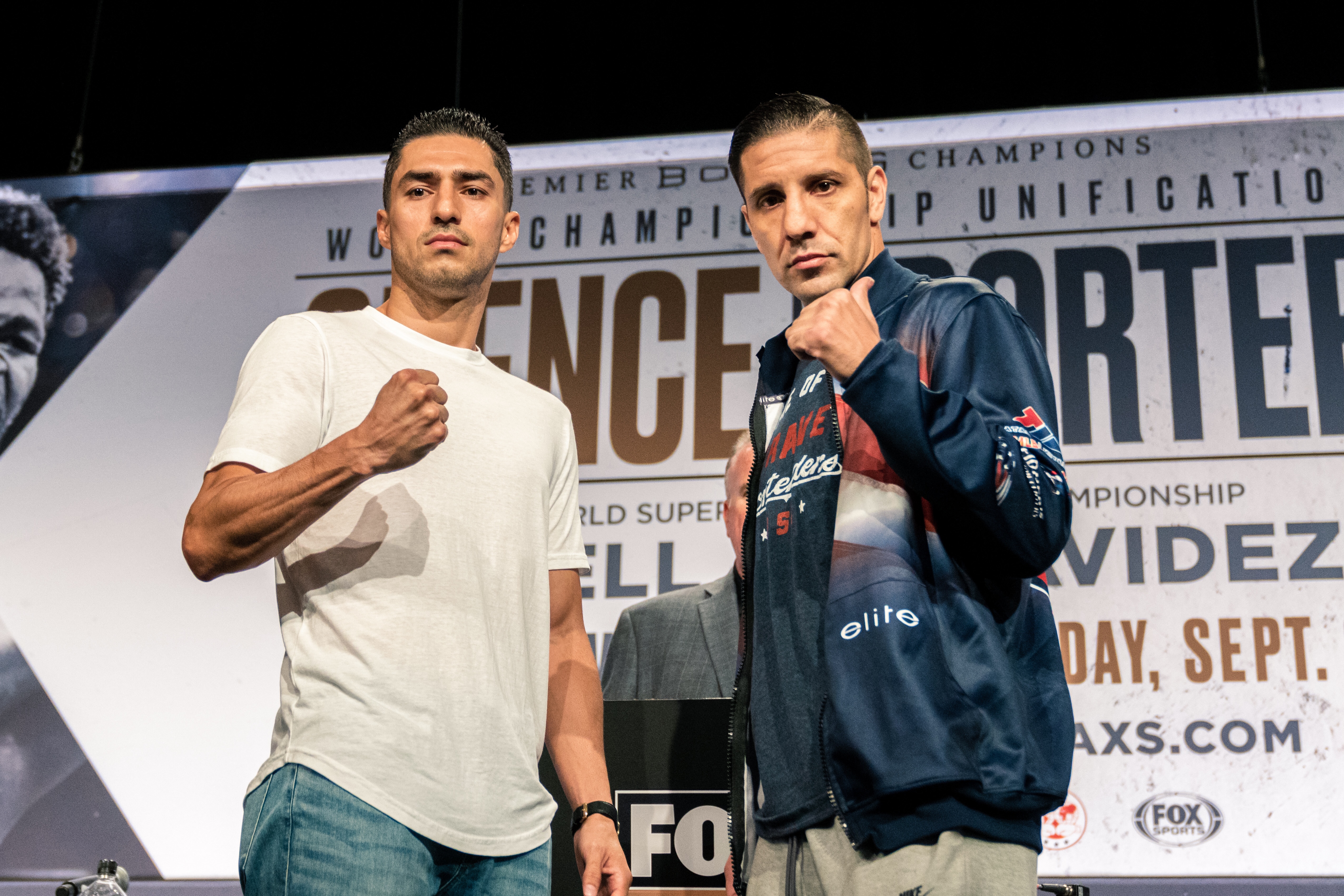 “This fight has been a long time coming. We came up in this sport around the same time and I always thought he would be a great challenge. If you want to look for someone who has a resume close to mine, it would be Josesito.
“I’m excited because this is a challenge. I know this is no easy fight. It’s going to be spontaneous combustion. It’s instant fight, just add water.
“It’s going to be all action. The butterflies are starting to kick in and that means I’m ready to go now. The hard work is done, the weight is good, and we’re ready to go to work.
“We sparred back in the day but the only thing I’ll say is, that if that session is what you’ll see on Saturday, you’re going to really enjoy it.”
ROBERT GUERRERO
“This is a huge event to be on. I’m blessed to be in this position. I’m ready to go and I’m in great shape. I can’t wait to go out there and make it happen. 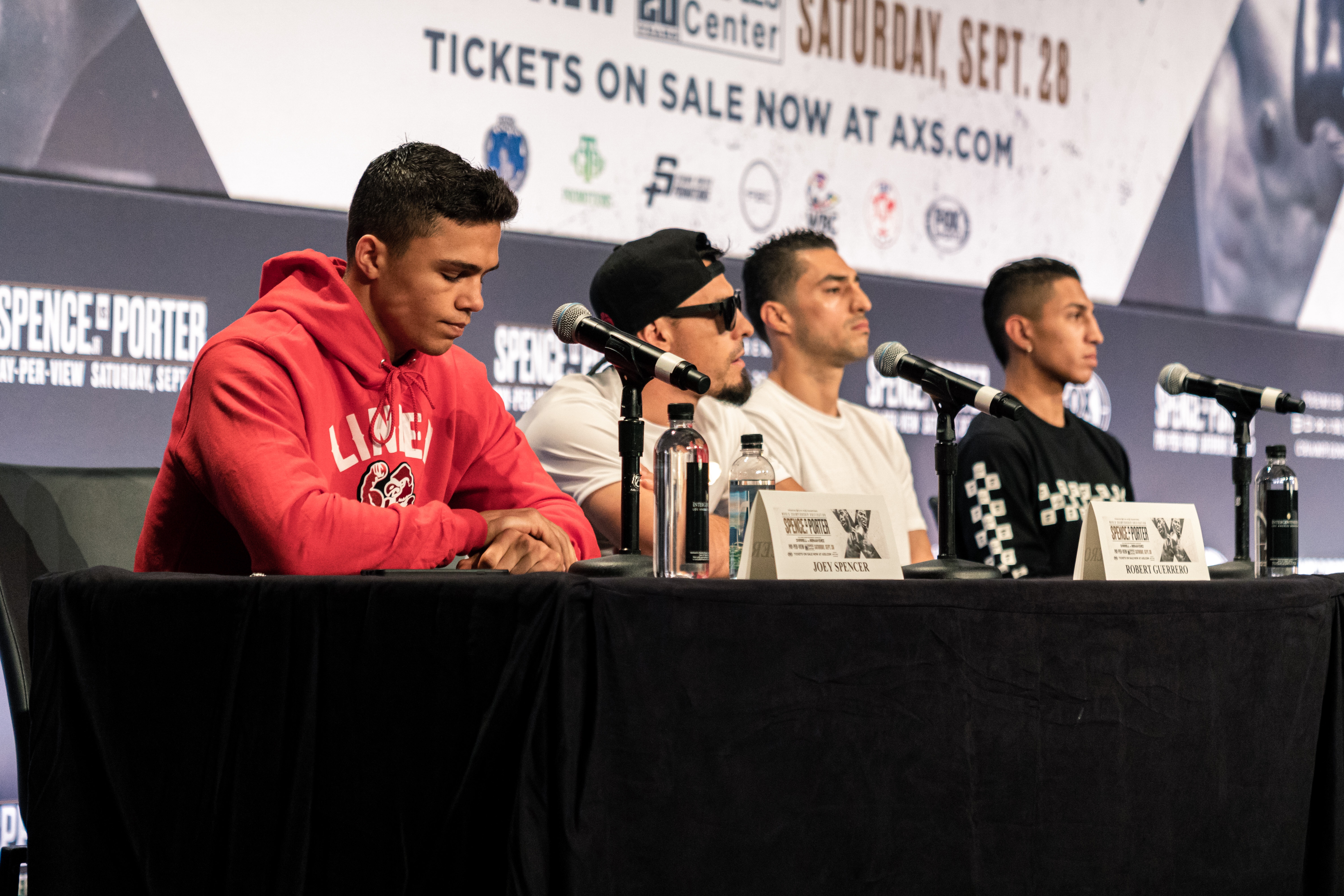 “I just love this sport. When you’re a junkyard dog that’s what you are. You want to go out and fight. I’ve been feeling great and I can’t wait to go make it happen.
“I’ve had a great camp in Las Vegas. In past years, I wasn’t even having a strong training camp like this. When you’re at this top level, you can’t leave any stone unturned, and I was leaving them unturned. Now, it’s time to take care of business on Saturday.
“I want to jump right back into these big fights. There’s a stacked welterweight division and it continues on Saturday night. This fight puts me right back in line.”
JERRY THOMAS
“I’m grateful to be here with an opportunity to fight Guerrero and show everyone what I’ve got. I’m expected to lose, but I’m not going to. I’m here to win and I expect to win. 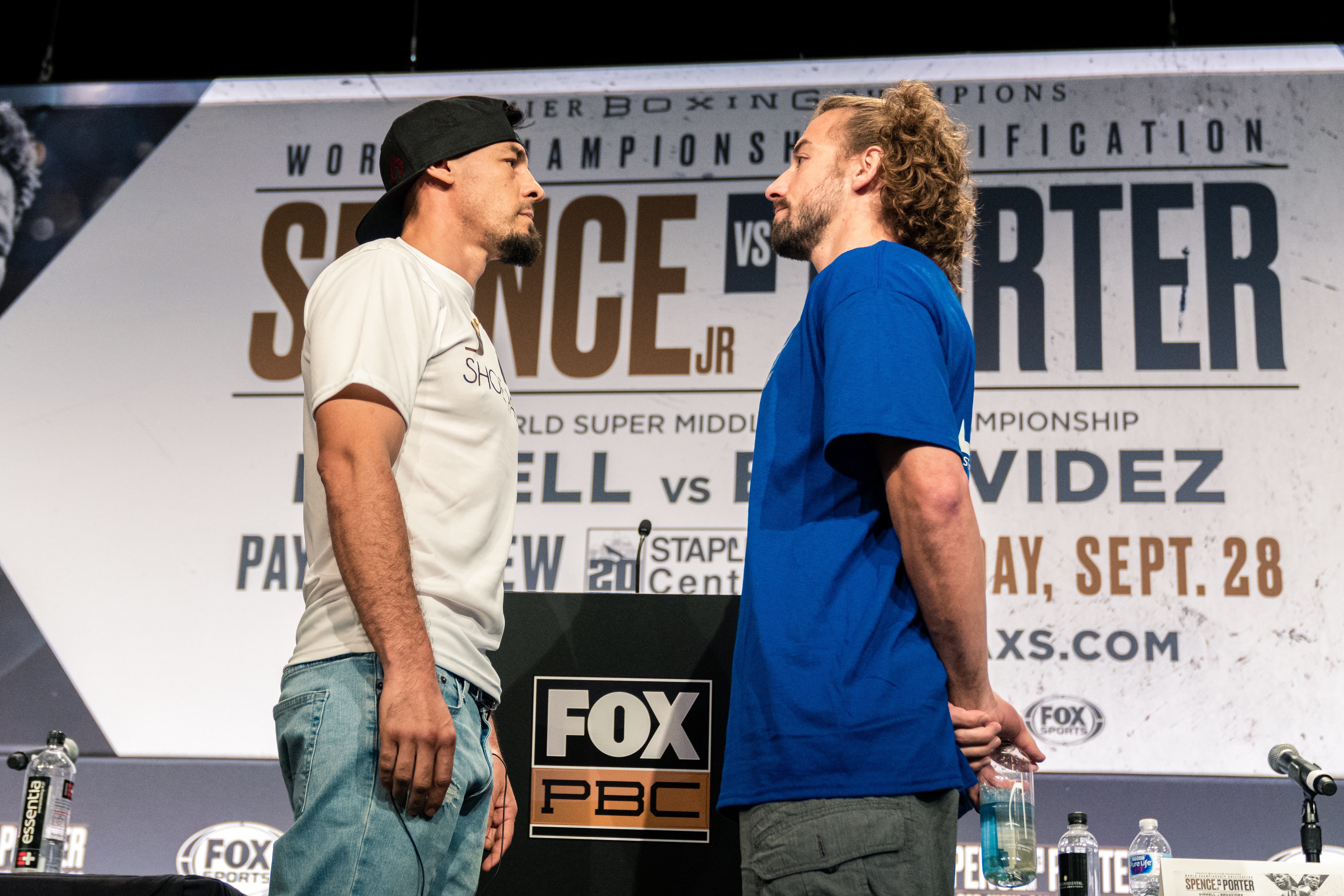 “It’s a little surreal to be in a fight against Roert Guerrero. He’s a warrior, so this is going to be a great fight. But I think his career is coming to an end and I have an opportunity to make that happen.
“I really didn’t think my career would ever be here, but I’ve been ready for this forever. Now is my opportunity to put on a show, and it’s going to be a good one.”
JOEY SPENCER
“It’s an honor to be a part of an event like this. I can’t wait to go out there and perform my best. My opponent is coming to fight and I’m excited to show everyone my skills. 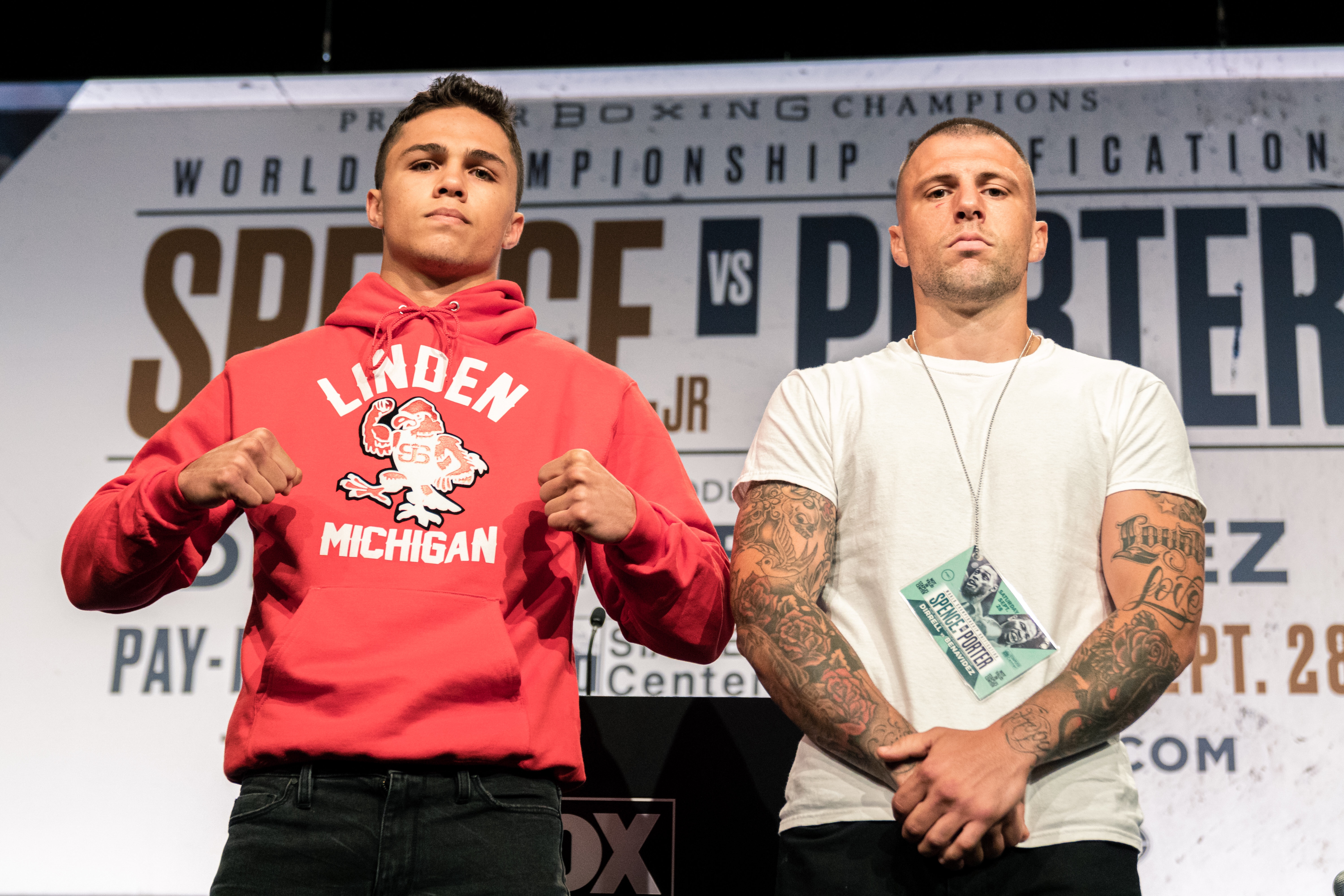 “People have expectations from me having this exposure at a young age, but I like it. It’s going to prepare me for the pressure of future fights better than others might be. I’m happy with the way I’m progressing.
“In a perfect world, I’ll be a top contender by this time next year. Hopefully, I’ll be talked about with the other champions. That’s the dream and that’s what I’m working for.”
TRAVIS GAMBARDELLA
“I can’t express how excited I am to be here. This is the biggest stage I’ve competed on and I’m very thankful for the opportunity.

“This is a dream come true. I got this fight because of what I’ve done in my career so far. This is the biggest moment of my life. Everything I’ve worked for the last 15 years comes into this.
“I’ve been through every bit of adversity that you could fathom to get to this moment. It’s a blessing and it’s been a long time coming.”