LOS ANGELES (Sept. 12, 2019): Jaime Munguia (33-0, 26 KOs) of Tijuana, Mexico and African warrior Patrick Allotey (40-3, 30 KOs) hosted their final press conference today at Dignity Health Sports Park ahead of their 12-round fight for the WBO Junior Middleweight World Title. The event will take place on Saturday, Sept. 14 at the aforementioned Dignity Health Sports Park in Carson, Calif. and will be streamed live on DAZN.
Undercard fighters such as Ryan “Kingry” Garcia (18-0, 15 KOs), Avery “A-Plus” Sparrow (10-1, 3 KOs), and Franchon “The Heavy-Hitting Diva” Crews-Dezurn (5-1, 2 KOs) also participated in the event.
Below is what some of today’s participants had to say at the presser.
JAIME MUNGUIA, WBO Junior Middleweight Champion: 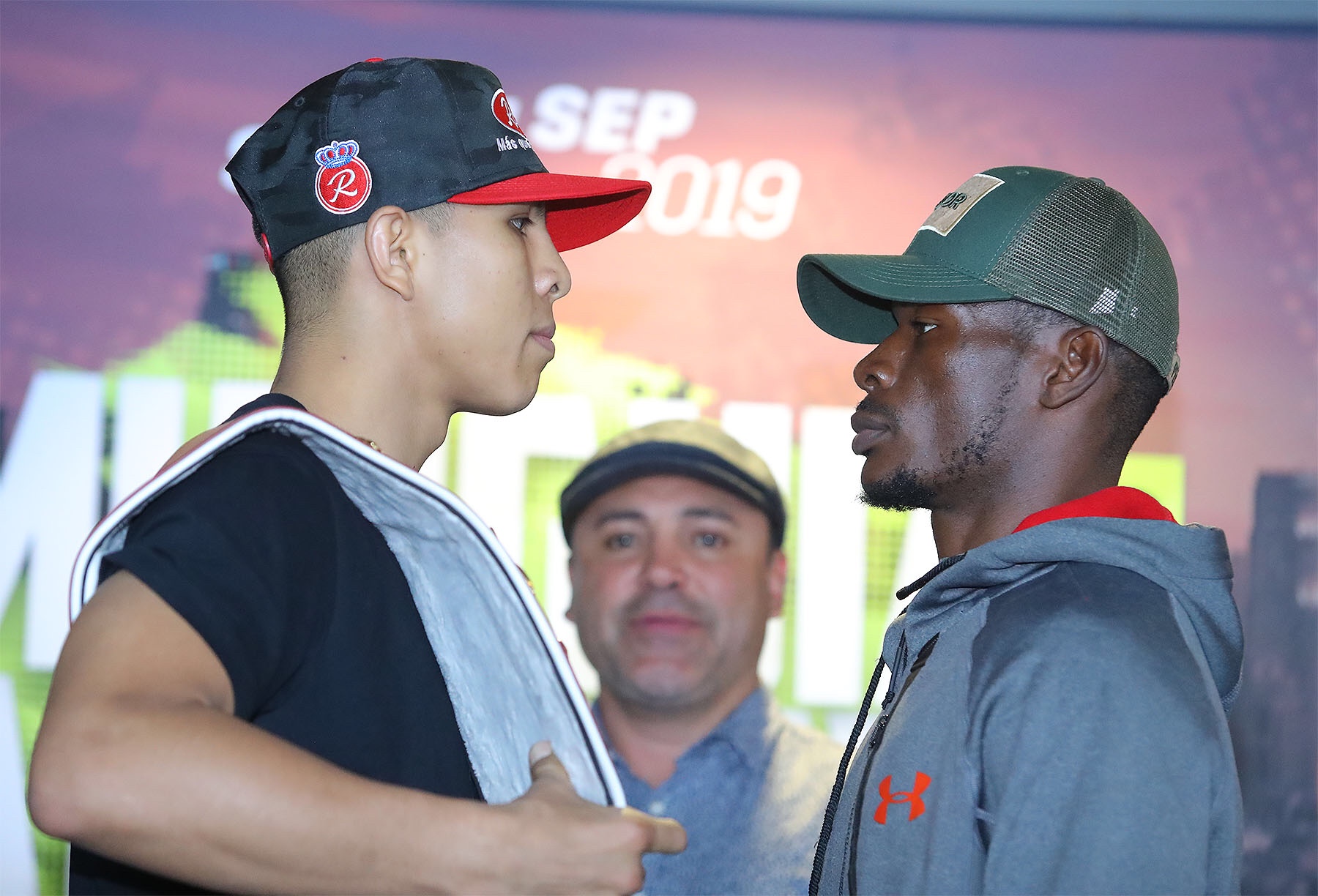 “I feel very honored and happy to be representing my country on this important date.  I feel ready and I’m prepared to deliver everyone a great show that is worthy of the date of Sept. 14. I had a great preparation, perhaps one of my best training camps, and I want to thank Erik Morales for everything he’s been showing me along with Fernando as well. I hope that this Saturday you see a Jaime Munguia that’s totally different. I’m ready, I’m going to give it my everything.”
PATRICK ALLOTEY, Junior Middleweight Contender: 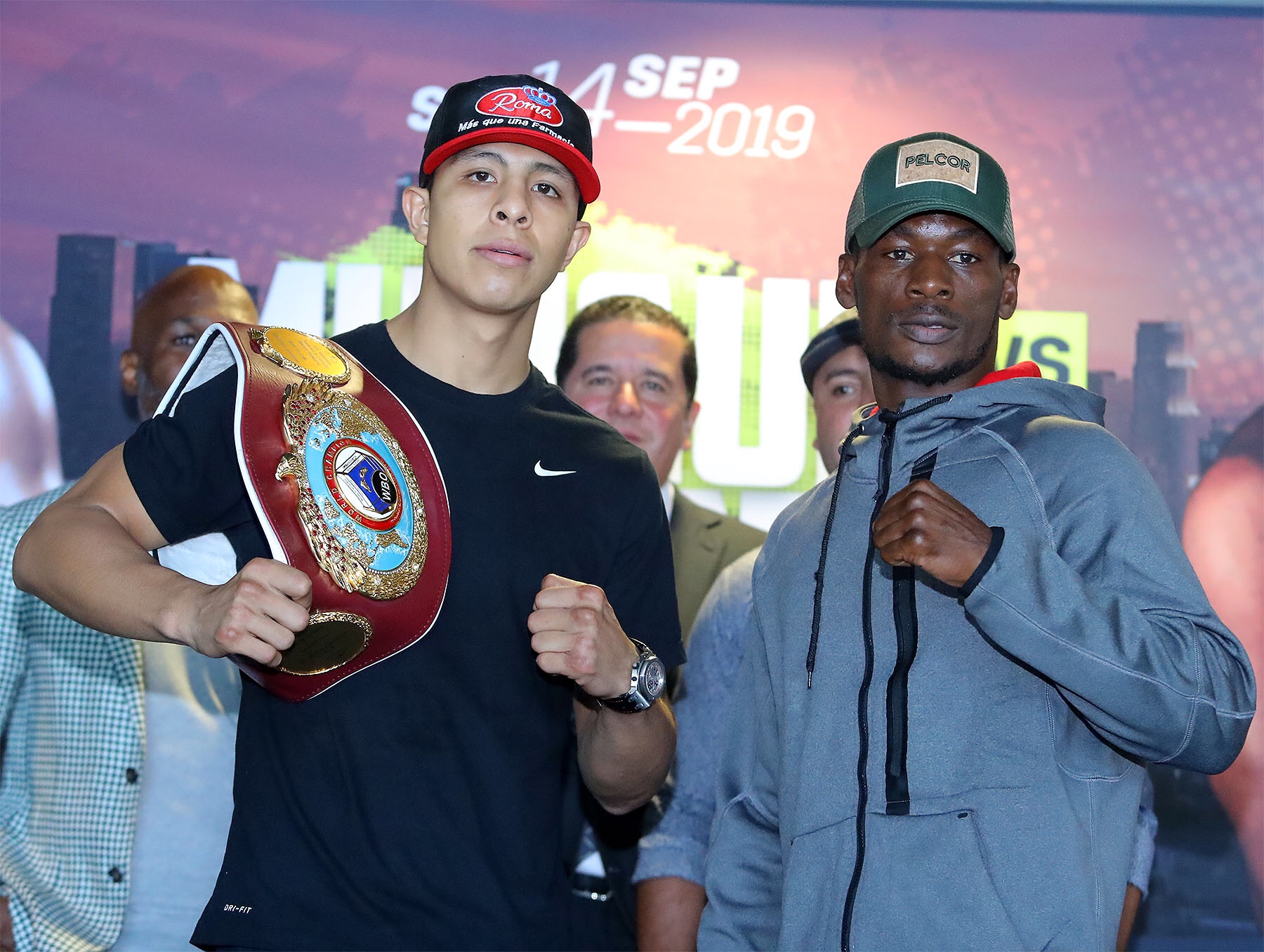 “I feel good. I feel good for this Saturday because I prepared for this fight. When I heard the rumors about this fight, I thought wow, this fight needs to happen, I need to be a world champion too. Like Oscar said, in Ghana we have great fighters, and I’m very happy to become one of them. I know Munguia is a very good fighter and he has power like I do, and I know come Saturday, Munguia is coming to throw his big shots and he thinks he can knock Patrick Allotey out. But no, because I’m also a great fighter and also have power like he does. I’m coming to fight and win. So I think on Saturday it will be a very good fight. I think the best man will win.”
RYAN GARCIA. Lightweight Contender: 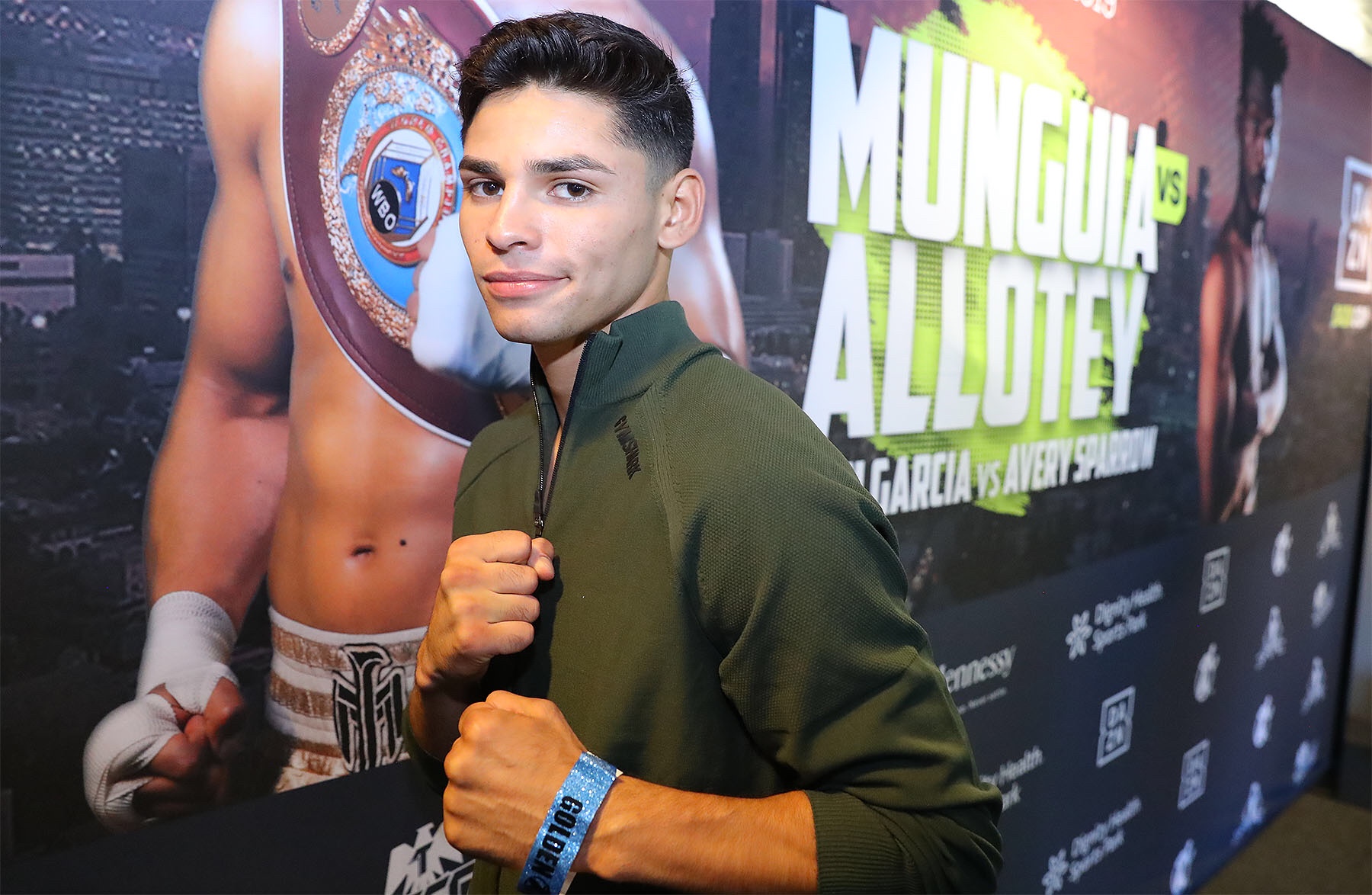 “This Saturday, I just plan to show all my improvements in the ring. [Avery] claims that he has a lot of experience. He has 11 fights – I don’t know how much experience you can have with that. I was in amateurs maybe even longer than him. I have just as much experience, and I’ve been working in the gym to get better and better every single day. I know there’s a lot of pressure on me, a lot of hype, and I know the things people say about me. The only thing I look to do is to become the best fighter I can be. This Saturday, stay tuned, it’s going to be a good one, I’m looking to prove myself and earn that respect in the ring.”
“A lot of people like to focus on my Instagram, you don’t hear me talk about it, everybody else just talks about it. It just connects me to my fans, and why wouldn’t I want to connect to the people who support me?”
AVERY SPARROW, Super Featherweight Contender: 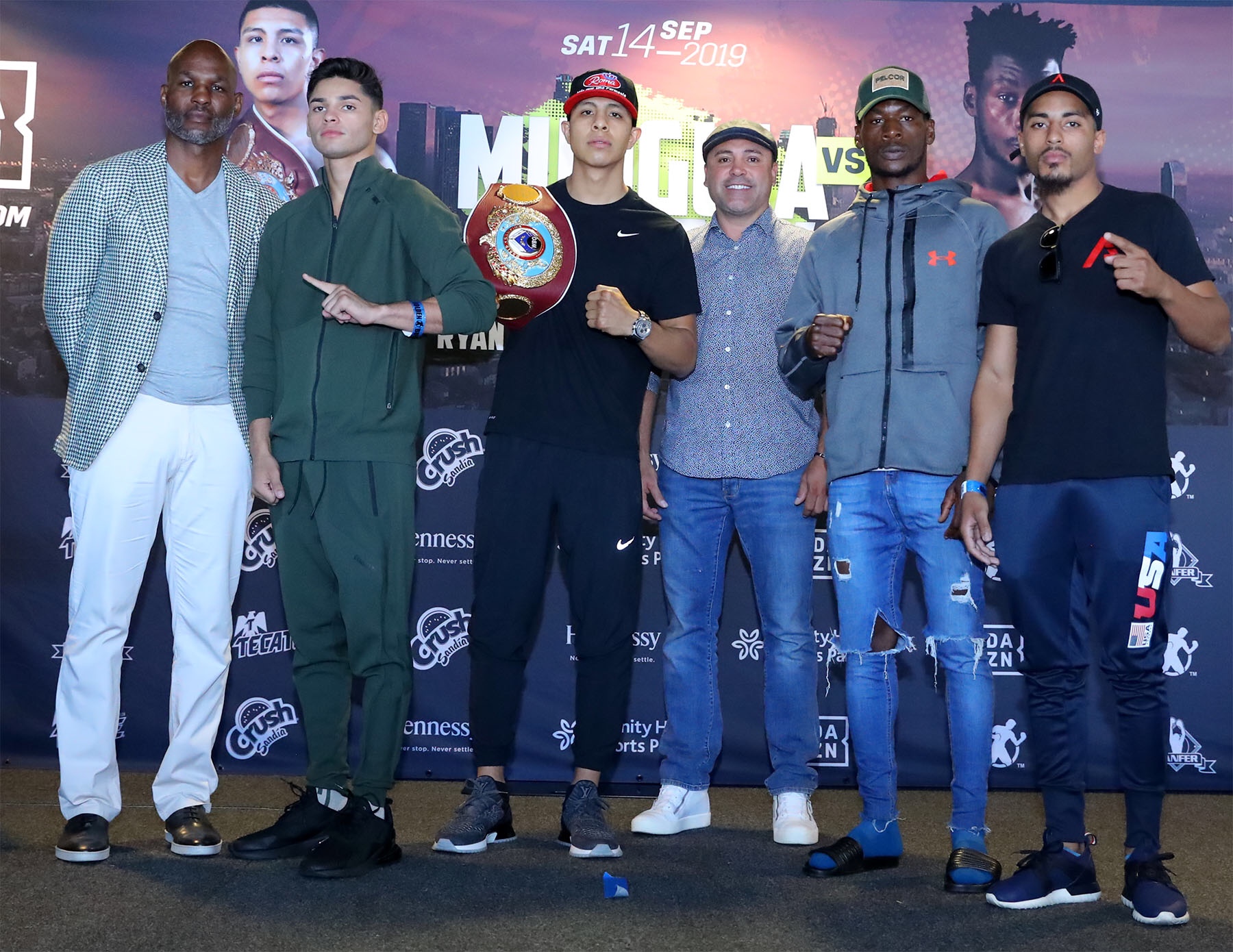 “I naturally weigh 126 pounds, I can get here easy. Unfortunately, we can’t get no fights there, we can’t get no fights at 130. My last fight was at 135 pounds, I dropped him two times, I controlled the whole fight. I felt good, I felt strong, and that was coming off a year layoff. This time, I had a great camp, I’m feeling solid, I got a lot of people backing me, supporting me. This opportunity I’m going to take full advantage of.”
“Ryan Garcia is a great fighter but he’s yet to be proven. When I fought in 2017, which is some years ago, I defeated Jose Lopez, who was Ryan’s last opponent. He’s getting guys that I already beat. He hasn’t really been put in tough. To me, I really don’t see this as a tough fight. He comes in, he only has one plan, to knock everybody out. When he goes the distance, he has a tough time, he has no inside game. It’s a lot of things that Ryan has to prove. There’s not a lot of things that I have to prove. The first 15, 16 fights when you’ve signed with an elite promotional company are favored for you to win. So this opportunity is for Ryan Garcia to show he is who he really says he is. If he beats me, then you can be sure Ryan Garcia is on to do big things. But after I beat him, he still has time to grow, he still has time to be a world champion, but I think he bit off more than he can chew. Come this weekend, the world will see that Ryan Garcia is over with. Ryan Garcia has a lot to prove, and he’s going to have to prove it because I’m coming to fight. You better tune in because it’s going to be an exciting fight and Ryan Garcia is done.”
FRANCHON CREWS-DEZURN, WBC Super Middleweight World Champion: 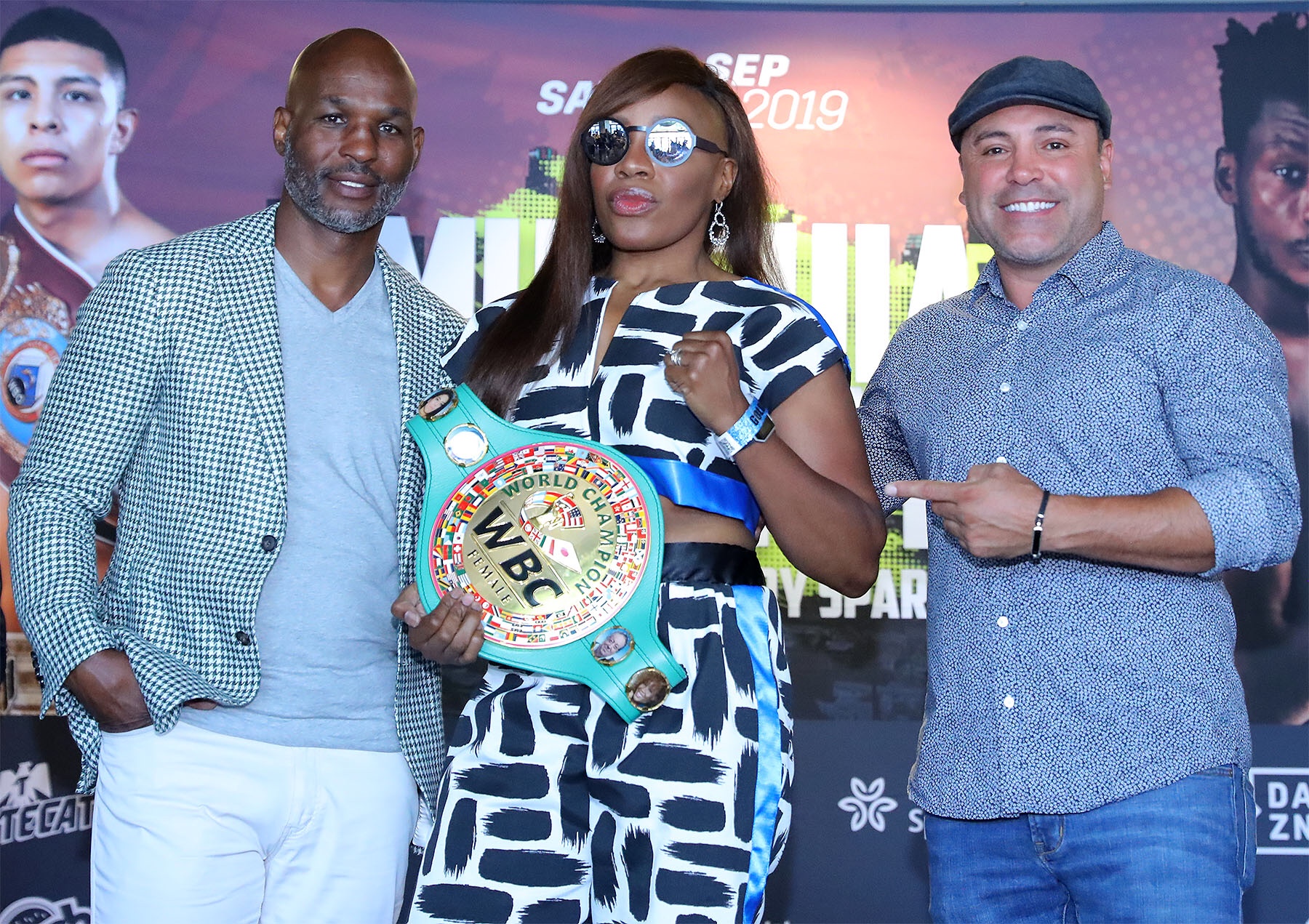 “I’m just so excited right now, I feel like a kid in a candy store. Sept. 14 is long etched in boxing history for the last decade. That’s when some of the best fights take place. To have the opportunity through Golden Boy to defend the title and to get to present myself to the world as I see it – as a champion not only in boxing, but in life – is a highlight of my life. Everyone is talking about how strong and big my opponent is, but my heart and my intellect is going to be stronger. I fought an undisputed unified champion and was blessed to hold my own, and with a good training camp and people in my corner, having then in my behind me, you guys are going to see the best version of me. I’m not coming to play, I’m coming to slay, I’m coming to entertain. I make my own outfits, I make my own boxing attire. Get ready for a show.”
ERIK MORALES, Trainer to Jaime Munguia: 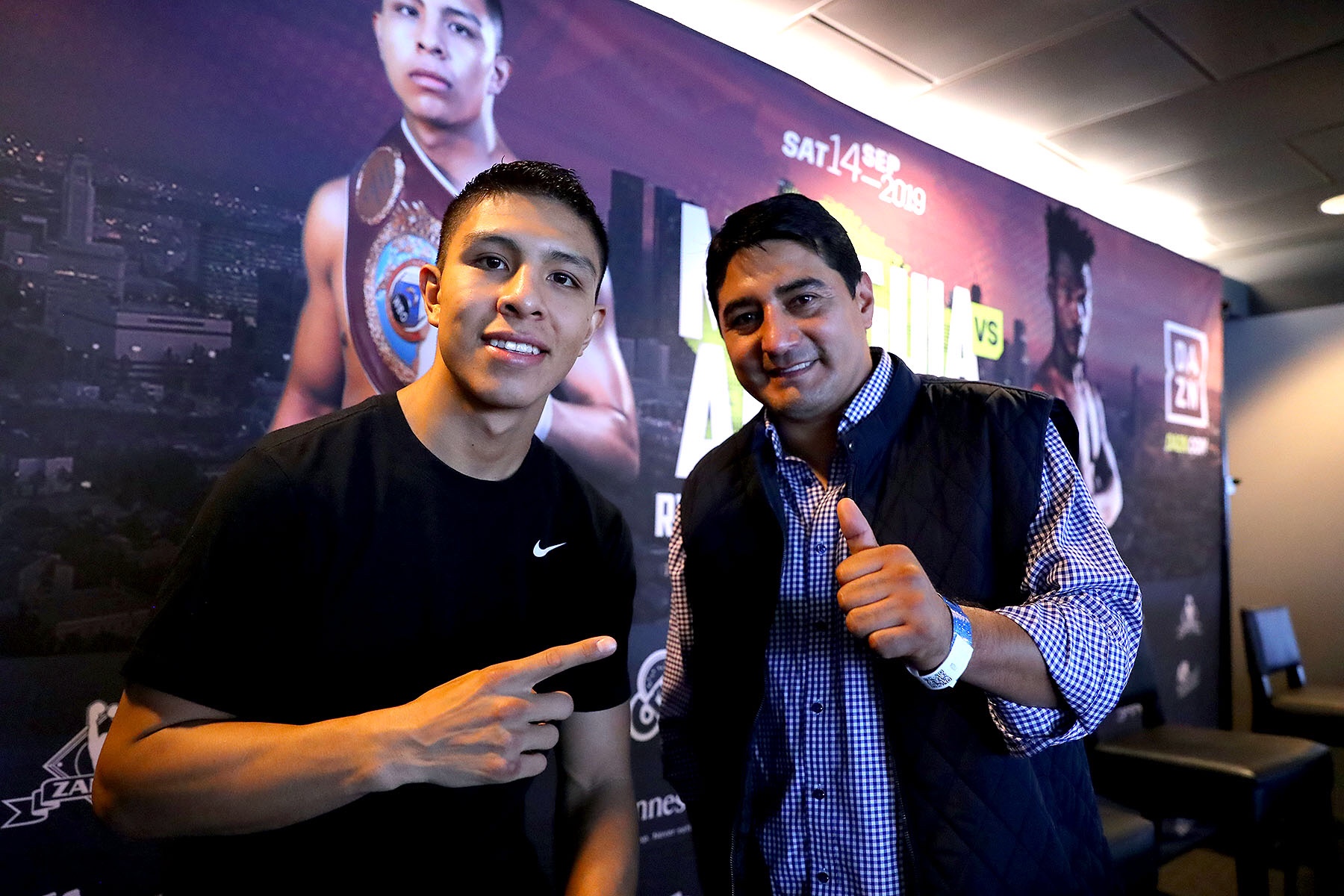 “It’s an honor to be training the new face of Mexican boxing. And overall, very satisfying to be training a younger boxer who has a lot of desire, a lot of motivation, and has the goal set on being one of the faces of boxing. What we’ve done is to make sure we utilize what he has and exploit those abilities in the ring, and this Saturday, you will see that.”
FERNANDO BELTRAN, CEO of Zanfer Promotions:

“I think it’s going to be a sensational fight. Sept. 16 is sensational and I think it’s a great, great fight. I think Oscar putting fighters with other promoters is what boxing is all about. I congratulate Oscar and I’m very happy to be in this strategic partnership. And, I think Munguia is the next face of boxing – without a doubt.”
OSCAR DE LA HOYA, Chairman and CEO of Golden Boy: 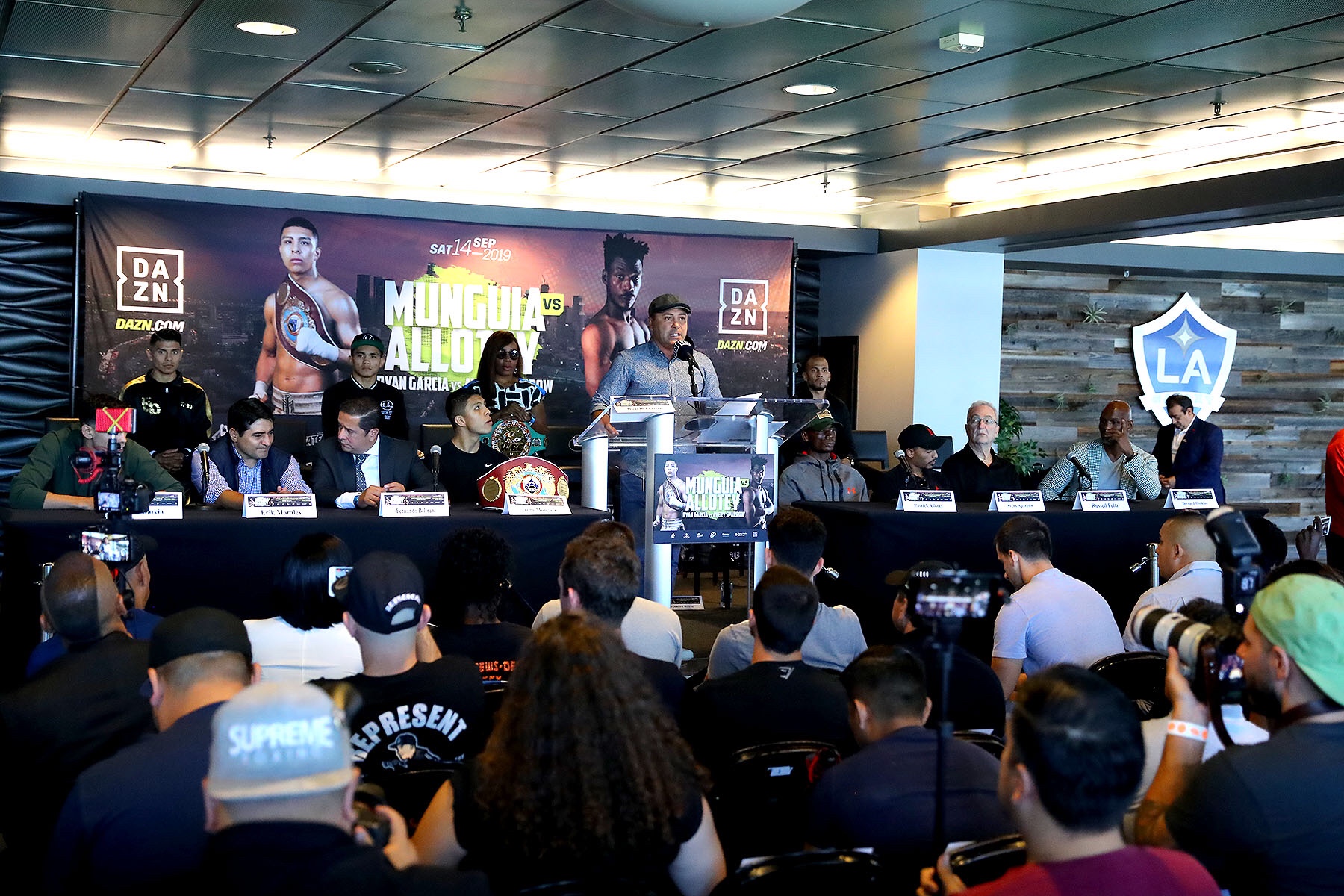 “Sept. 16 has held the biggest boxing events in the history of the sport. You have to go back to Julio Cesar Chavez, some of my fights, Canelo, and now, Jaime Munguia and Ryan Garcia and all these fights here. It’s about staging the best event at the best stadium, but there’s something about Saturday night that’s going to be fireworks.”
“We decided to headline Jaime Munguia, who is a world champion in his own right, he’s a WBO world champion, but we had to put him with a real tough fighter. A real fighter who’s going to come and derail those plans. That’s what boxing’s all about – a coin flip. And when we were looking at his opponent, or the contender, when I talked to Roberto Diaz and Eric Gomez, they mentioned to me a fighter from Ghana. It instantly reminded me of Azumah Nelson, Ike Quartey, it reminded me of tough, tough fighters. We instantly said yes, [Allotey] is the guy because fighters from Ghana – they come to fight, they have passion.”
“We signed [Ryan] in 2016, and he’s been developing as a solid contender, as a fighter we feel can reach the stars. He’s trained by a great trainer in Eddy Reynoso, who is bringing out the best in him. So we feel very excited to see exactly what is yet to come. He’s defeated fighters such as Carlos Morales, Jayson Velez, Jose Lopez, Braulio Rodriguez, and like I said, being trained by Eddy Reynoso is going to take him to that next level that everybody aspires to be at.”
“Women’s boxing is not on the rise. It’s already here. We at Golden Boy Promotions feel proud that we can showcase these talents and continue to open the doors for much bigger and better things for women’s boxing.”
BERNARD HOPKINS, Golden Boy Partner and Future Hall of Famer: 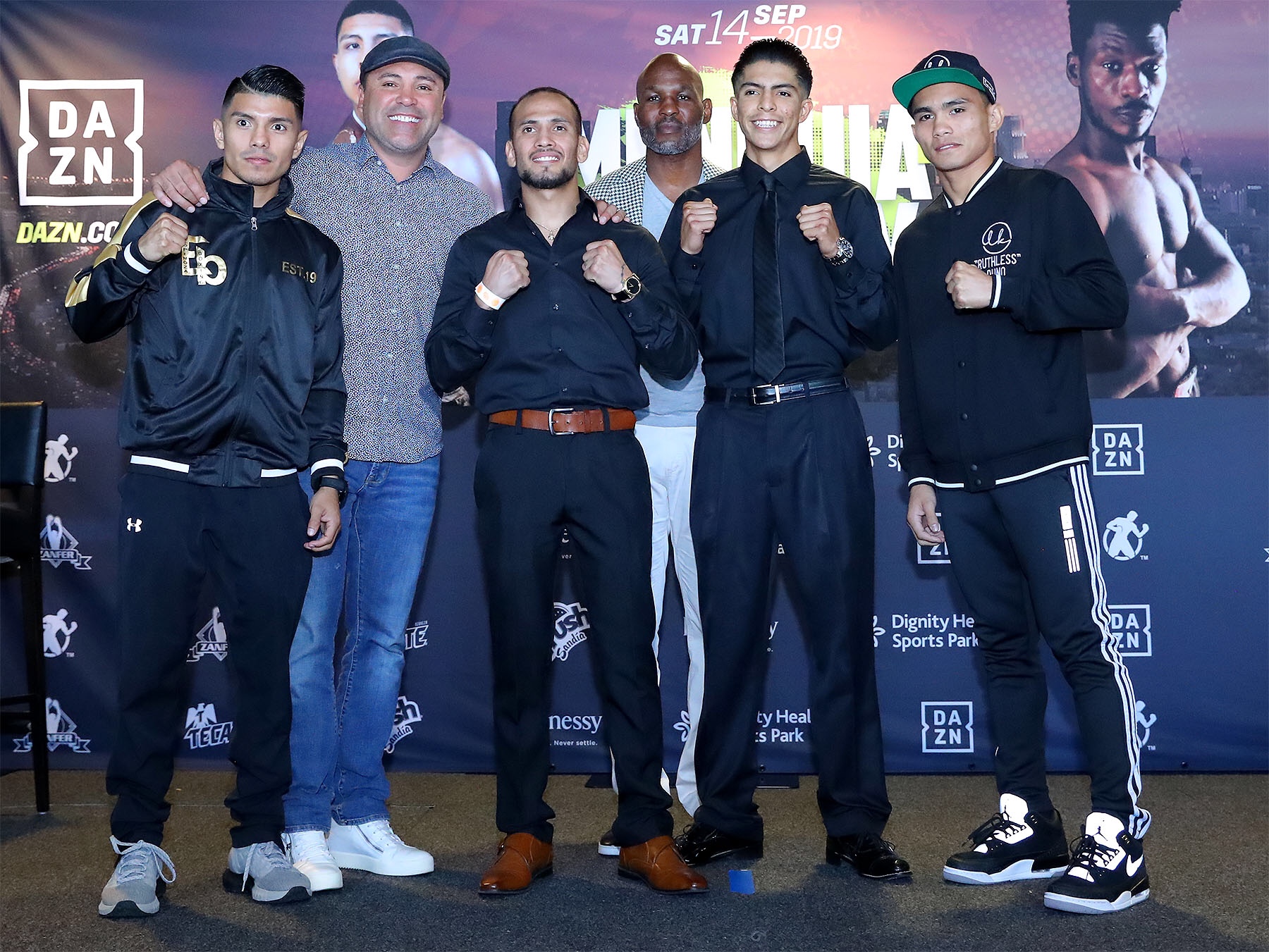 “I believe the women’s match is probably going to really try to take over this entire card. I’m excited to see that. Everybody here has the opportunity to show their talents on a high scale. Enjoy the fight. Look at the talent that’s here, there’s champions and some wannabe champions. Understand that this is what boxing is all about – to bring the best, whether they’re starting at a level before they get to the top level or they’re already there.”