Kovalev-Yarde will stream live and exclusively in the United States on ESPN+, the leading multi-sport streaming service, beginning at 12:30 p.m. ET/9:30 a.m. PT.The stream will also showcase the co-feature bout between unbeaten cruiserweight contender Aleksei Papin (11-0, 10 KOs) and former world title challenger Ilunga Makabu (25-2, 24 KOs). Fans in the U.S. can sign up at www.ESPNplus.com or on the ESPN App. 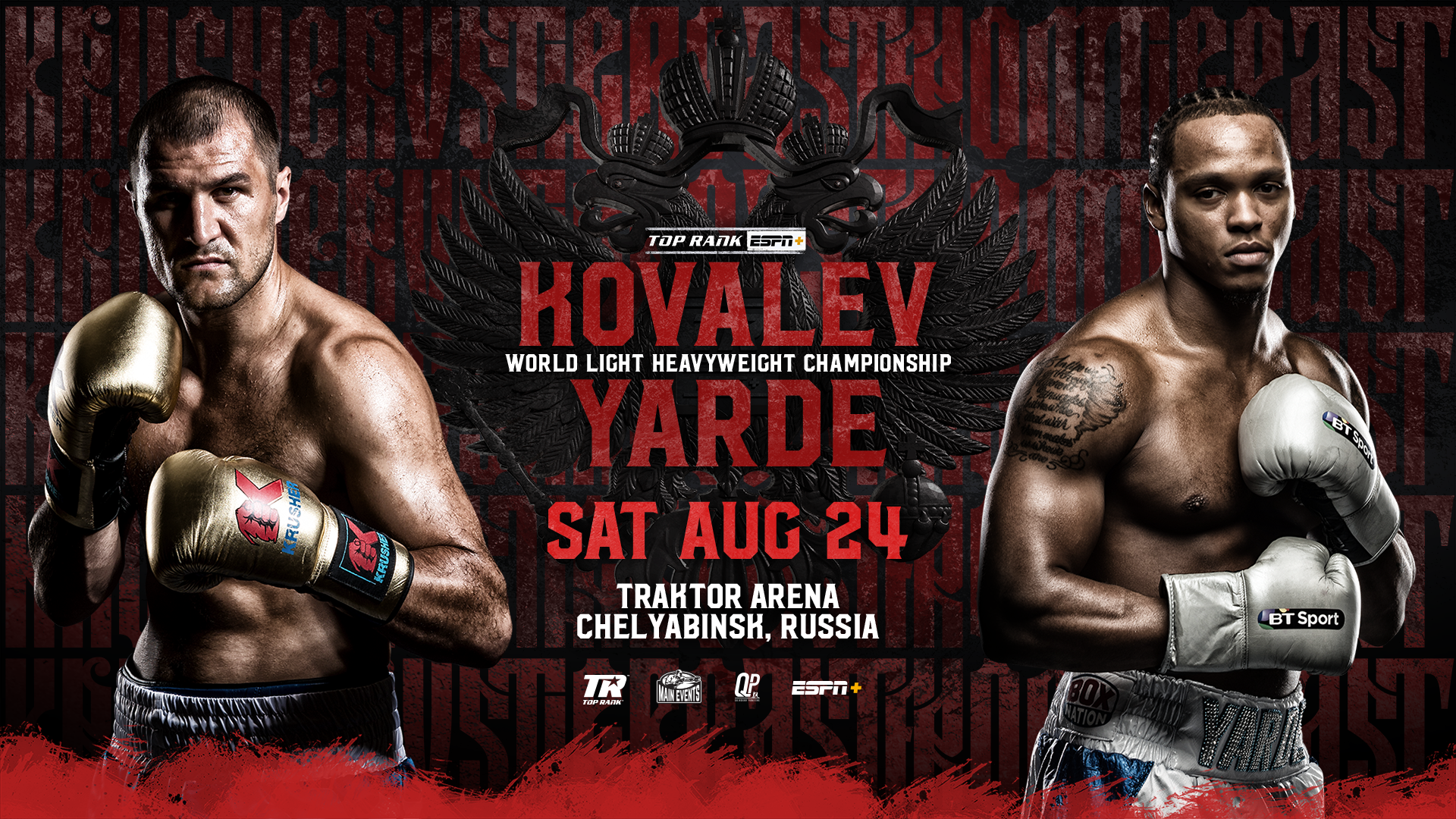 “I am thrilled to fight for the first time in my hometown of Chelyabinsk,” Kovalev said. “It is a dream to defend my WBO title in front of all my friends and family back home. I am also thankful ESPN+ will show the fight to my fans in the U.S. Thank you to Igor Altushkin, Egis Klimas, Main Events and Top Rank for making this dream a reality, and thank you to Anthony Yarde for agreeing to fight in my home.”

“Sergey has done just about everything a professional fighter can do, other than fight in his own hometown,” said promoter Kathy Duva, CEO of Main Events. “One of the sport’s greatest road warriors, Sergey will finally get the chance to salute his legion of fans in Chelyabinsk, where he grew up. It will be an exciting, long overdue homecoming for Sergey. And I am so happy to confirm that Sergey’s many fans in the U.S. will be able to watch this great event only on ESPN+. I wish to thank Igor Altushkin, German Titov and everyone at RCC for making this all possible. I also wish to thank Bob Arum and Top Rank for their continued support.”

Kovalev (33-3-1, 28 KOs) is a veteran of 15 world title bouts and has won the light heavyweight world title on three occasions. A former unified champion, he revived his career in February by scoring a wide points win over Eleider Alvarez, the man who’d knocked him out less than six months prior. One of this generation’s most decorated champions, Kovalev holds victories over Jean Pascal, Nathan Cleverly and living legend Bernard Hopkins. In Yarde (18-0, 17 KOs), he faces a London native with a giant hand who is taking a giant step up in competition. Yarde has won his last 16 bouts by knockout, most recently stopping Travis Reeves in five rounds in a bout that streamed on ESPN+. This will be only his second pro bout outside of England.