GRAND PRAIRIE, TEXAS (Aug. 10, 2019): Knockout artist Vergil Ortiz Jr. (14-0, 14 KOs) defeated Antonio “Relentless” Orozco (28-2, 17 KOs) in the sixth round of their 12-round fight for the WBA Gold Welterweight Title. The event took place on Saturday, Aug. 10 at The Theatre at Grand Prairie in Texas and was streamed live on DAZN. Ortiz stopped Orozco at 2:16 of the aforementioned round. 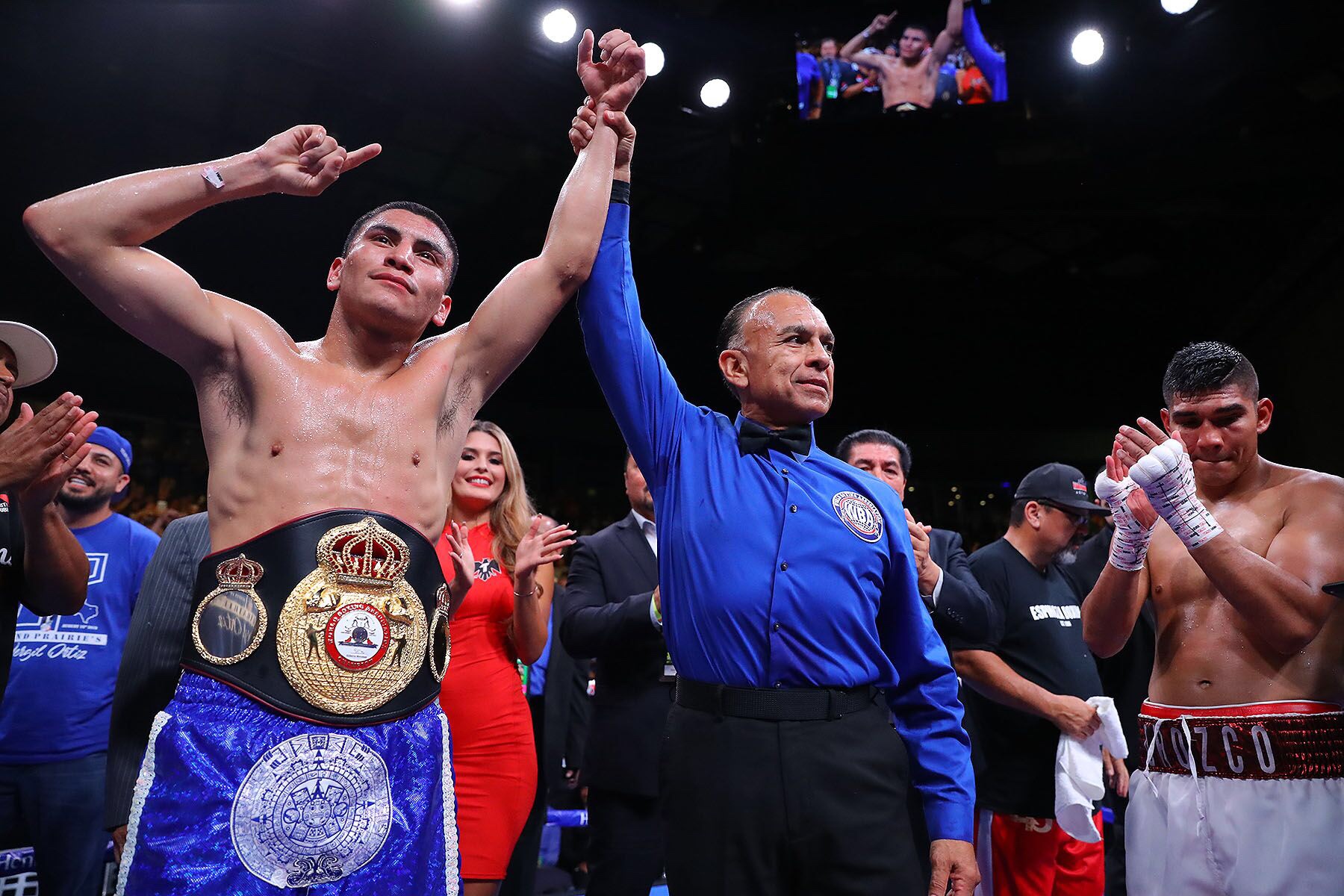 “I’m going to be honest. I don’t like the way I did in the fight,” said Vergil Ortiz Jr. “I don’t even know how many rounds we went; that’s how into the fight I was, but the first three, four rounds, I could have done way better. I definitely have a long way as a boxer to reach that world champion status. But we’re going to keep making those improvements, and we’re going to learn from this fight. I’ve been getting all these KOs. I’ve been saying that they haven’t been getting in my head, but as you can see in that first round, I got a little excited. Maybe I could have ended it, maybe not, but I had to force myself to slow down, and I’m just going to learn from this fight.”
“Everyone knows that Grand Prairie is the grandest of all the cities in the world. We have the best people, the best work ethic, and the best kids that are going to grow up to be something one day. And I just want to set an example for each and every one of you guys, whether you’re kids, teenagers, or adults. You can do it if you put your mind to it.”
“Vergil caught me slipping; that’s all I can say,” said Antonio Orozco. “We kind of got him in the ring and in the fight, but he is an excellent fighter and I can’t take anything away from him. I have to go back and talk to my team to see what’s next. So far I have four kids and my wife waiting for me at home, so I’m going to spend some time with them.”
In the co-main event Joshua “The Professor” Franco (15-1-2, 7 KOs) of San Antonio, Texas and Oscar “El Jaguar” Negrete (18-2-2, 7 KOs) of Paramount, Calif. fought to a split draw in a 10-round battle of non-stop action for the NABF and WBA International Bantamweight Titles. The scores consisted of 96-94 for Franco, 96-94 for Negrete and one score of 95-95. 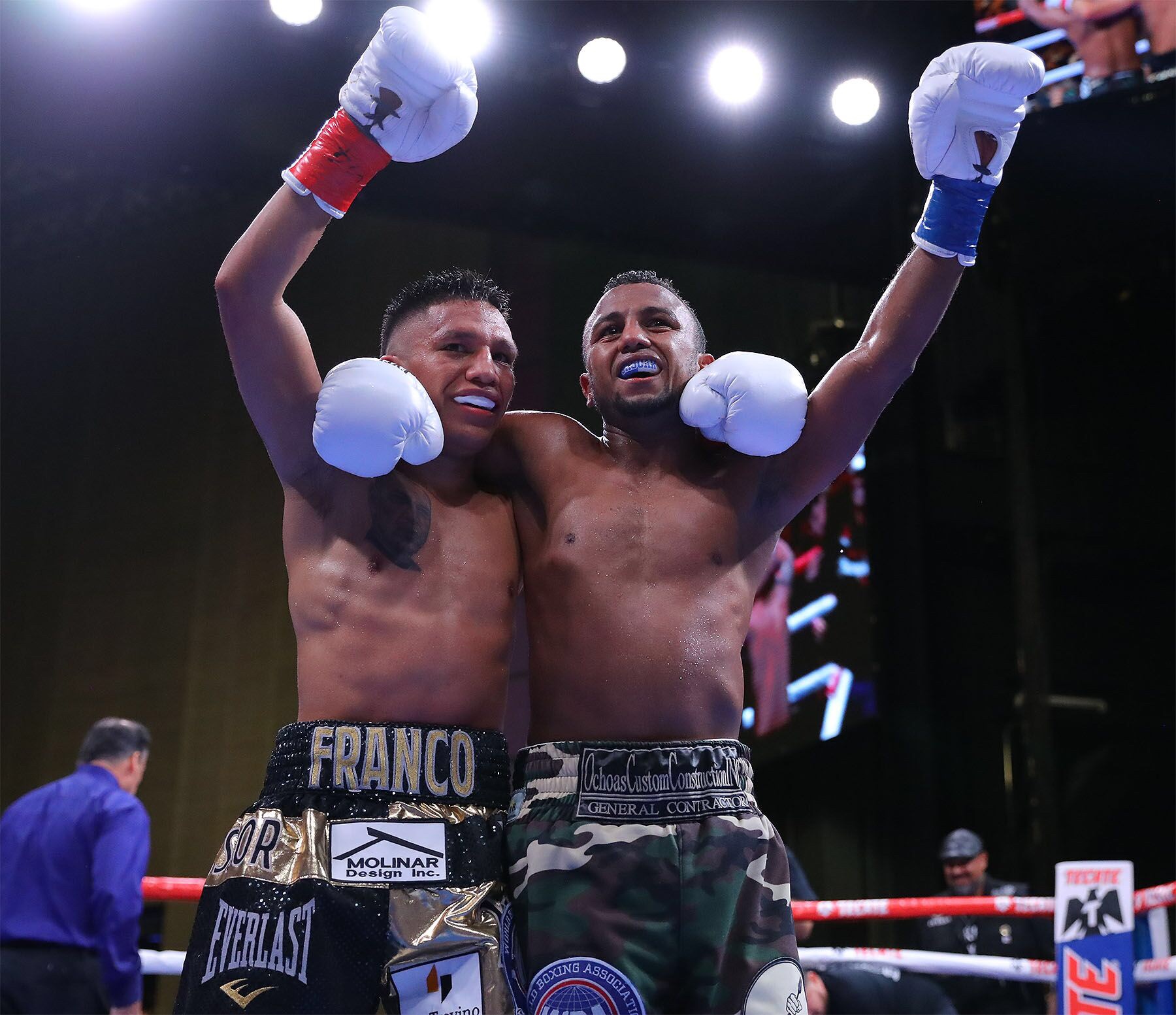 “It was a tough fight, but I put it all towards the end, and it is what it is,” said Joshua Franco. “Negrete is a tough fighter. He is always going to be tougher when we fight. Nothing but respect to Negrete. Nah, no fourth fight. I may move on to something else or see what happens.”
“I think this was a great fight, a close fight and we are in Texas, so I had to knock him out to win,” said Oscar Negrete. “Franco is a great fighter and he has my respect. I have to admit that he knew how to assimilate to my punches and then what resulted is he started grabbing on to me to prevent me from landing more. For right now the fourth fight, to be honest, I want to see what my promoter has to say, but if he wants to fight, let’s do it. I’m right here.”
Hector “El Finito” Tanajara Jr. (18-0, 5 KOs) of San Antonio, Texas successfully defended his USNBC Lightweight Title against Ezequiel Aviles (16-4-3, 6 KOs) of Los Angeles, Calif. via unanimous decision in a 10-round battle. Tanajara won with three scores of 100-90. 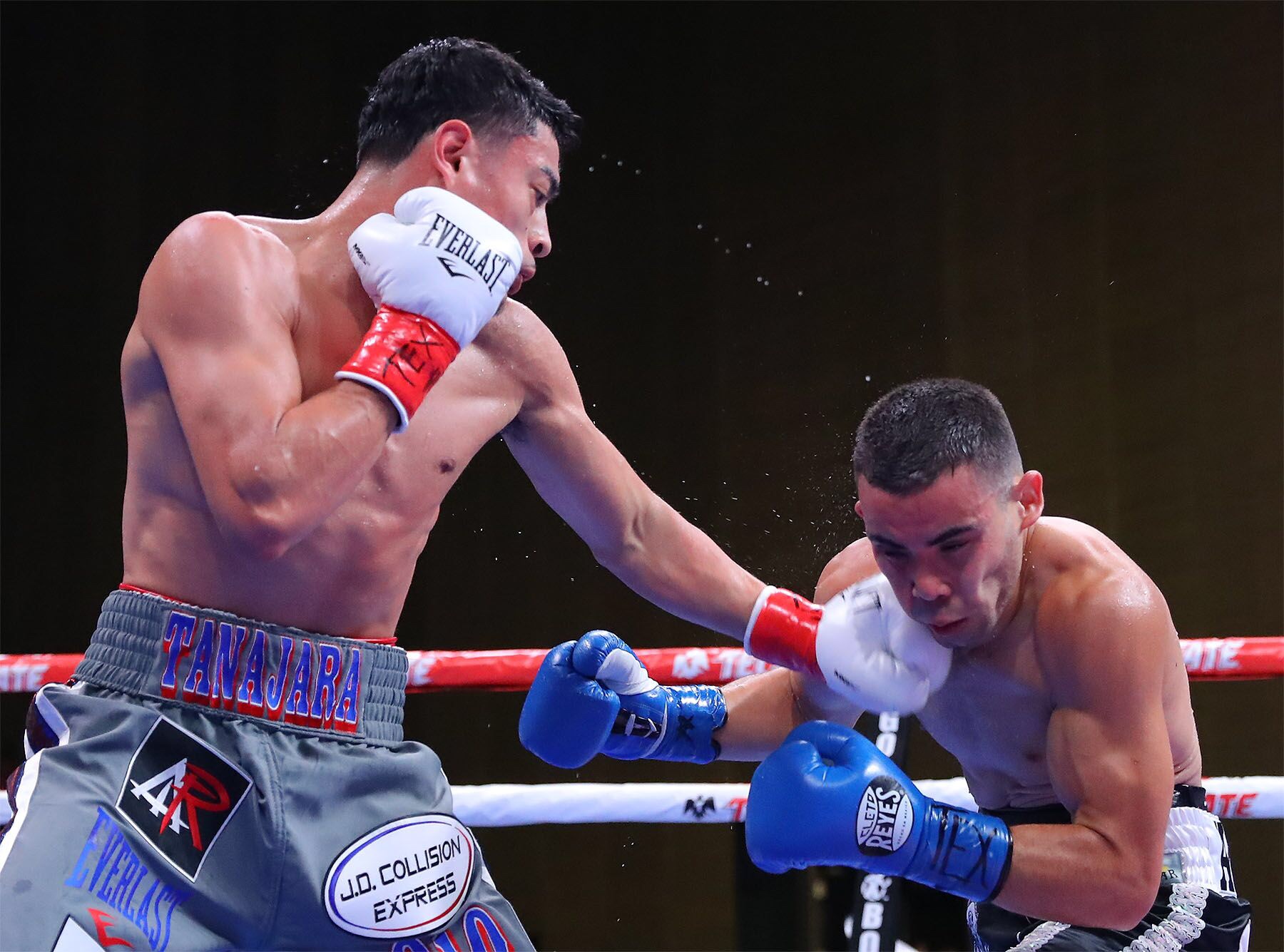 “I felt I gave a good performance, one of my best performances yet, thanks to all my hard work at the gym with my trainer and coach Robert,” said Hector Tanajara Jr.“Everything I worked for in the gym paid off. I had a very tough opponent. He was very good with the distance and the hard punches; he knew how to take a very good punch. I hurt him a lot of times, and I was surprised he stayed until the end. The rhythm change in the seventh round was part of the plan. Robert just said, ‘For the first few rounds, keep working on your jab, and then little by little, all the punches are going to start opening up.’ And that’s what happened. I started catching him with uppercuts, and I started switching with the right hand, and everything was landing after. The only fighter right now I want is Ryan Garcia. We work for the same company. I haven’t turned down a fight Golden Boy has given me, and neither can he.”
Marcelino “Nino” Lopez (36-2-1, 21 KOs) of Buenos Aires, Argentina scored a fifth-round knockout victory against Daniel Echeverria (21-9, 18 KOs) of Durango, Mexico in a scheduled 10-round welterweight fight. Lopez won at 2:54 of the aforementioned round. 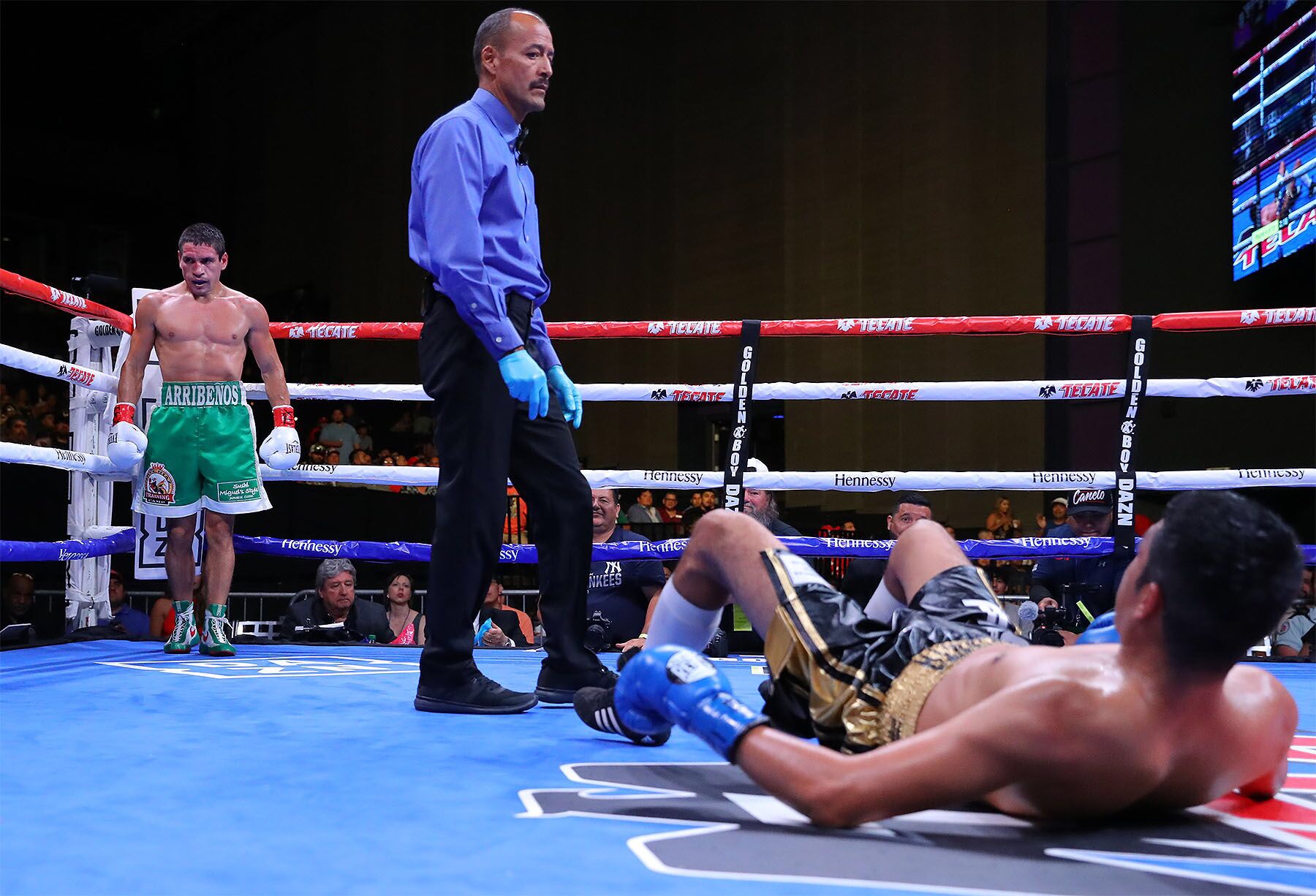 “I’m very happy I won with a knockout, which is something wonderful, but to be honest, I’m not completely pleased with my performance at the ring,” said Marcelino Lopez. “I wasn’t the Marcelino I know I can be, but hopefully with continuity I’ll be able to reach my full potential. It took me a while because I have been out of the gym, out of fighting for about a year. And I think that was an effect for this fight. That’s just something I’m going to fix in the gym, working with Joel, but overall I’m happy with the victory. My opponent performed like we expected. He is left handed, so that complicated me a little bit, but we knew he was going to get a little too confident. I knew I was stronger, and I felt I was a better boxer than him. What I would really like is a world title opportunity. That’s why I’m working hard. If I can’t do that, I want to make an important fight, but I’d love the opportunity to fight for a world title.”
Travell “Back Magic” Mazion (15-0, 12 KOs) of Austin, Texas defeated Jeremy Ramos (11-7, 4 KOs) of Bayamon, Puerto Rico via unanimous decision in an eight-round super welterweight slugfest. Mazion won with two scores of 78-73 and one of 80-71. 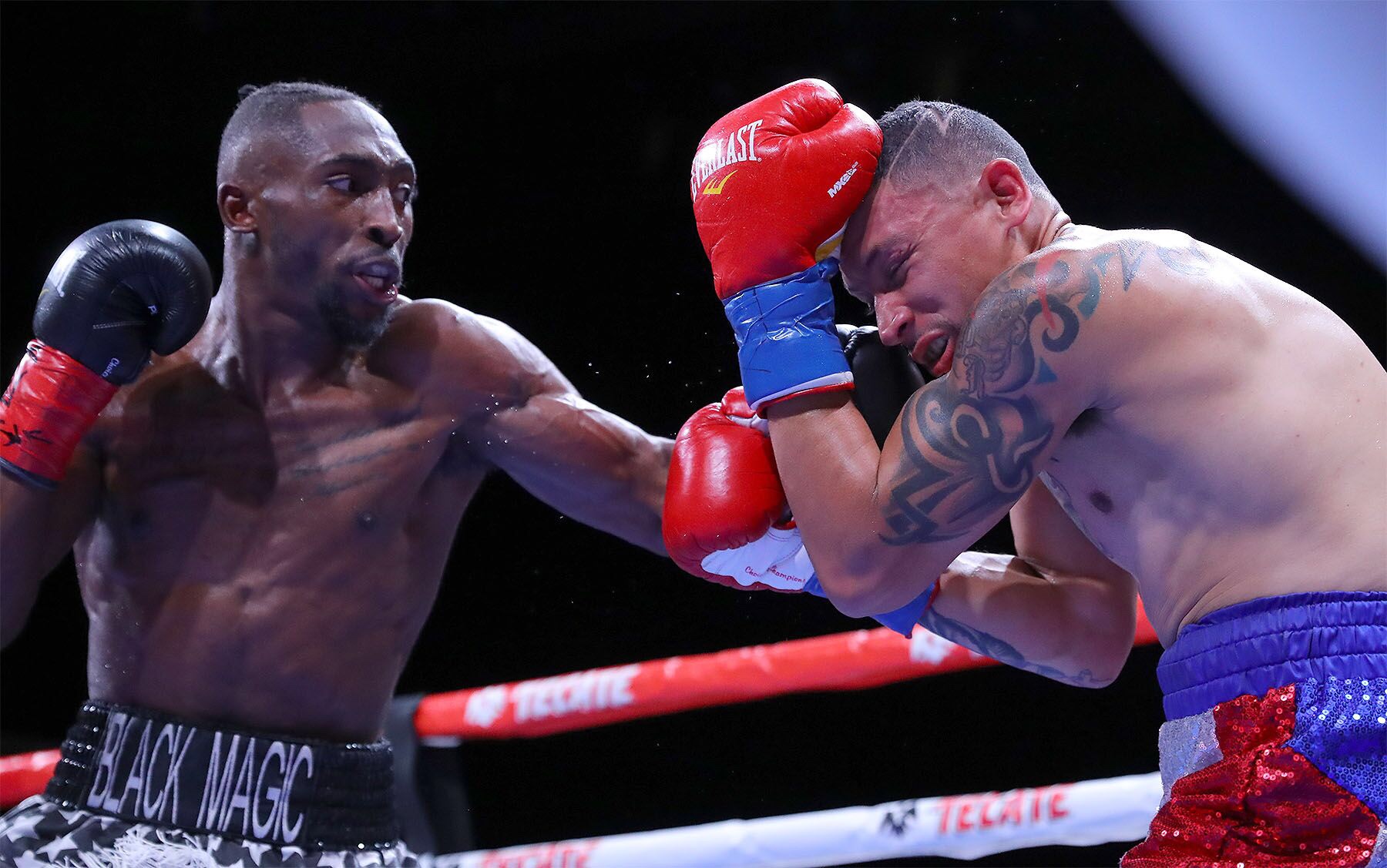 “I had an amazing opponent,” said Travell Mazion. “God bless him. He was such a great opponent. I expected what was right; I went down there and got a good boxing lesson. I feel ready good, and I’m on to the next one. It’s my style. In boxing you’re going to take some hits, so you have to learn how to take a hit. I know how to take a hit, and I know how to come back from a hit. It’s all the sweet science of boxing baby. I’ve called you out one time – come on, Jaime Munguia. You’re fighting a guy I don’t even know. Come to me, 15-0, 12 KOs, come on dude, I’m here. I don’t like to talk no crap. But I want a belt. Come get it. I’m here. I’ll fight anywhere. I don’t care where it is. I’ll fight here. Let’s go.”
Alex Rincon (7-0, 6 KOs) of Dallas, Texas scored a second-round knockout victory against Joel Guevara (4-6-1, 3 KOs) of Charleston, Virginia in a six-round super welterweight clash. Rincon stopped Guevara at :58 of the second round. 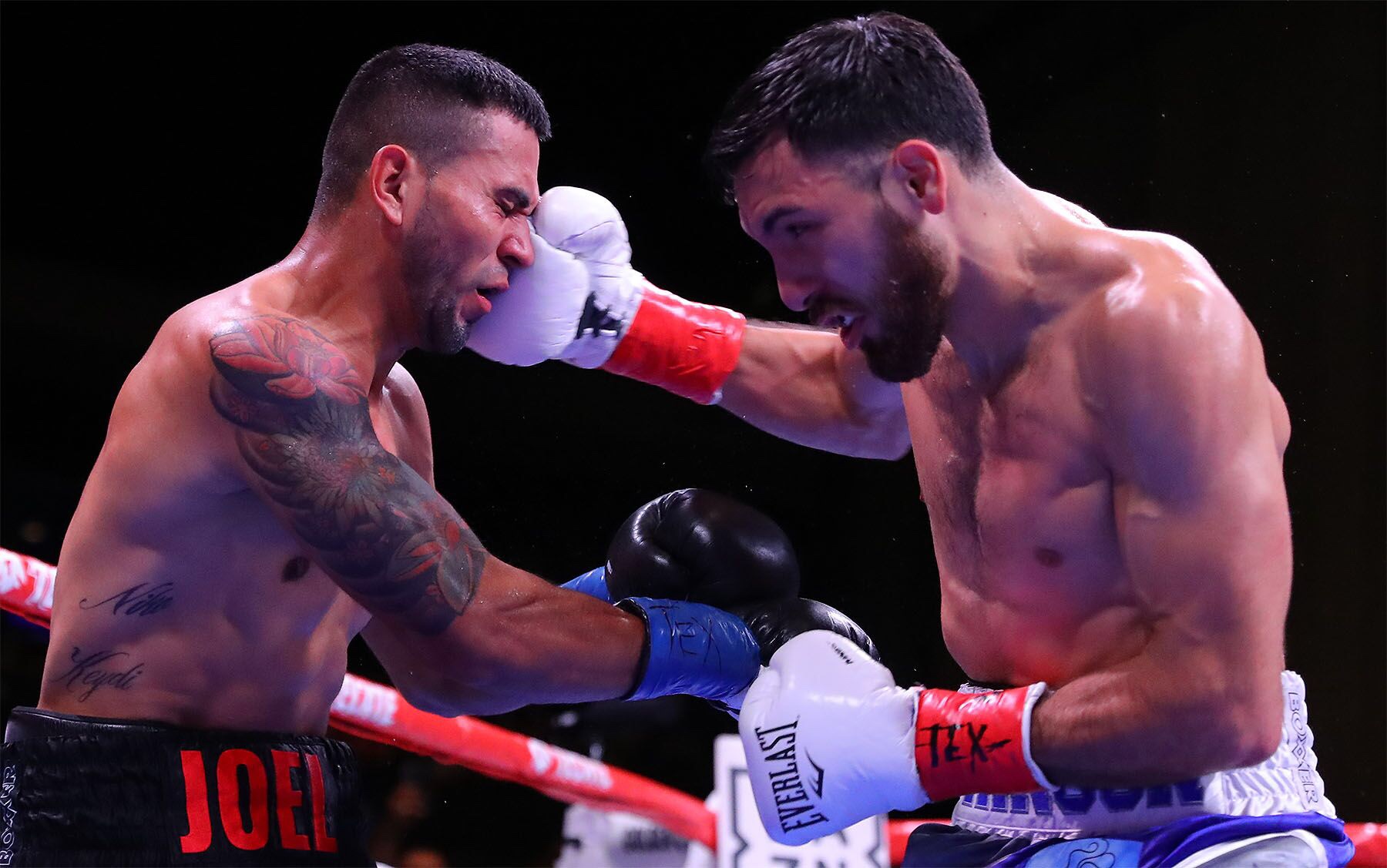 “The fight shouldn’t have passed the first round. I was kind of over patient, but it was a great fight for me,” said Alex Rincon. “I felt strong, I felt that push of confidence having my brother fighting next to me, and hearing my mother felt good to me. You always want that KO. I wanted to give my fans a show. They all paid good money to be here so I wanted to make sure they saw a knockout. On top of that, it was a very emotional win for me just because of everything that’s going on in the world right now. This world needs more love, more peace. There’s a lot of crazy stuff going on in the world right now.”
Tristan Kalkreuth (1-0, 1 KOs) of Arlington, Texas made a successful professional debut by stopping Kynndale Prather (0-2) of Olathe, Kansas in the first round of a cruiserweight fight originally scheduled for four rounds. 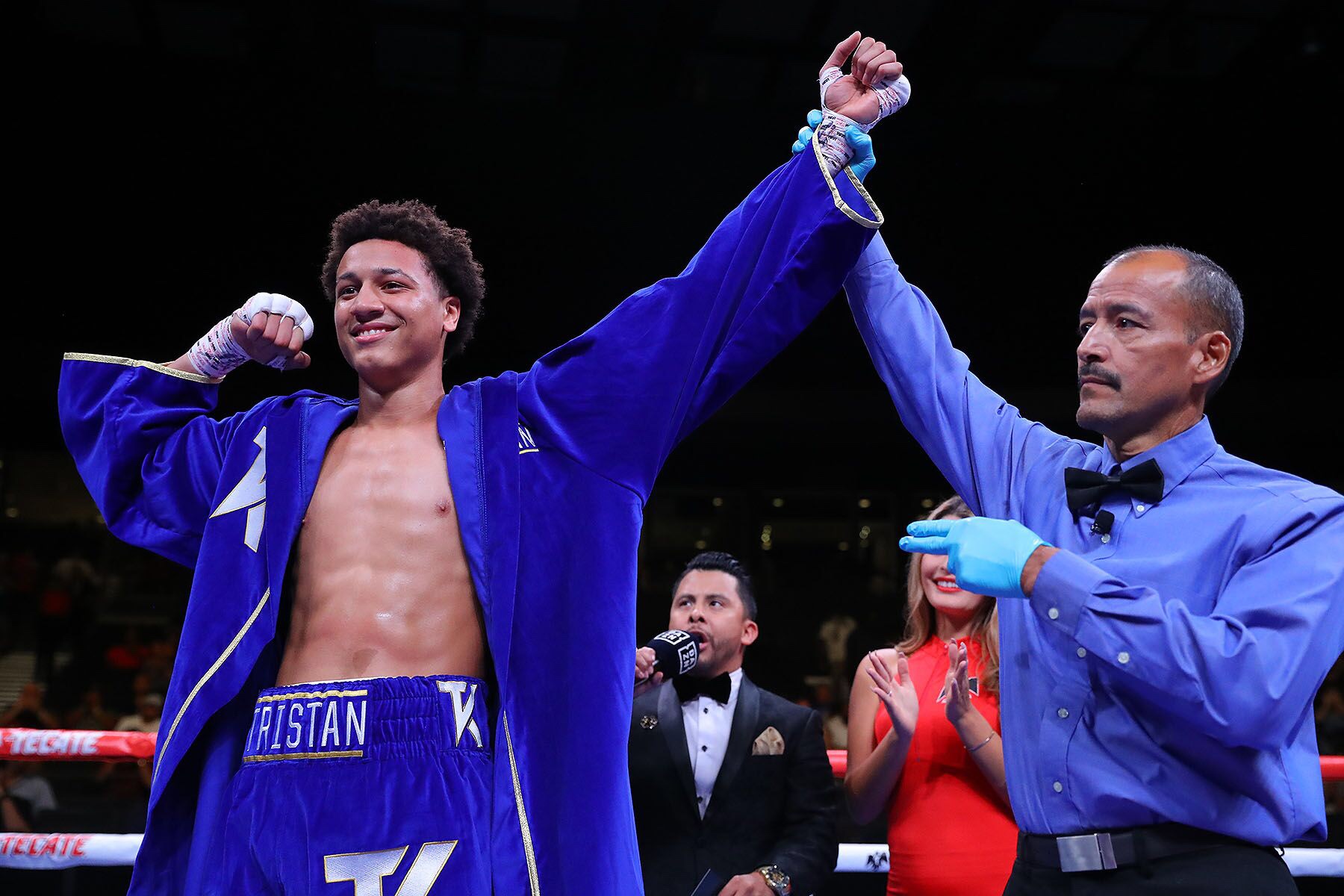 “I’m feeling great. It feels like the fans were inside the ring fighting with me,” said Tristan Kalkreuth. “I’m very grateful to be here. I came out with a knockout. I showcased my power, my skills and my speed. I’m excited. I’m ready to fight tomorrow. If you would give me a fight right now I would fight again. All glory to God. Me and my opponent have families to feed. I know that he came out here trying to knock me out, and I was doing the same thing. I guess it didn’t work out for him.”
Hector Valdez (11-0, 7 KOs) of Dallas, Texas beat Rafael Delgado (6-1, 5 KOs) of Los Angeles, Calif. via unanimous decision in a hard-fought six-round super bantamweight battle. Valdez won with two scores of 58-55 and one score of 59-54. 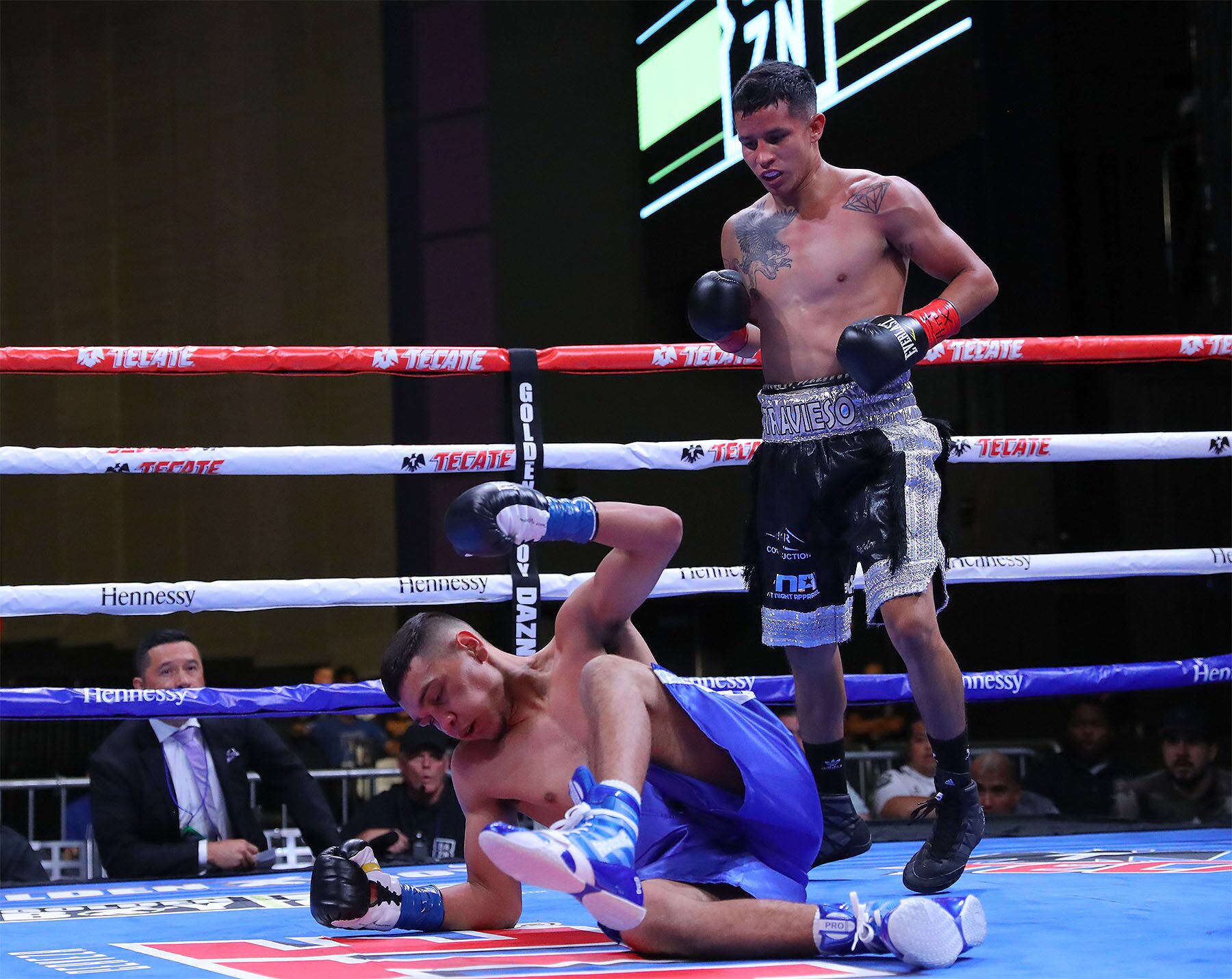 “I feel pretty good about the fight and happy with the result,” said Hector Valdez. “My opponent is a strong kid and he got some badass style. He has a pressure style like me. He just wants to keep coming, but overall my training worked. My coach told me ‘you are not going to knock this kid down because he is tough’, but I executed our plan.”
George Rincon (8-0, 5 KOs) of Dallas, Texas defeated Enrique Escobar (17-7, 14 KOs) of Buenos Aires, Argentina via knockout in the second round of a six-round super lightweight fight. Rincon won at 2:13 of the aforementioned round. 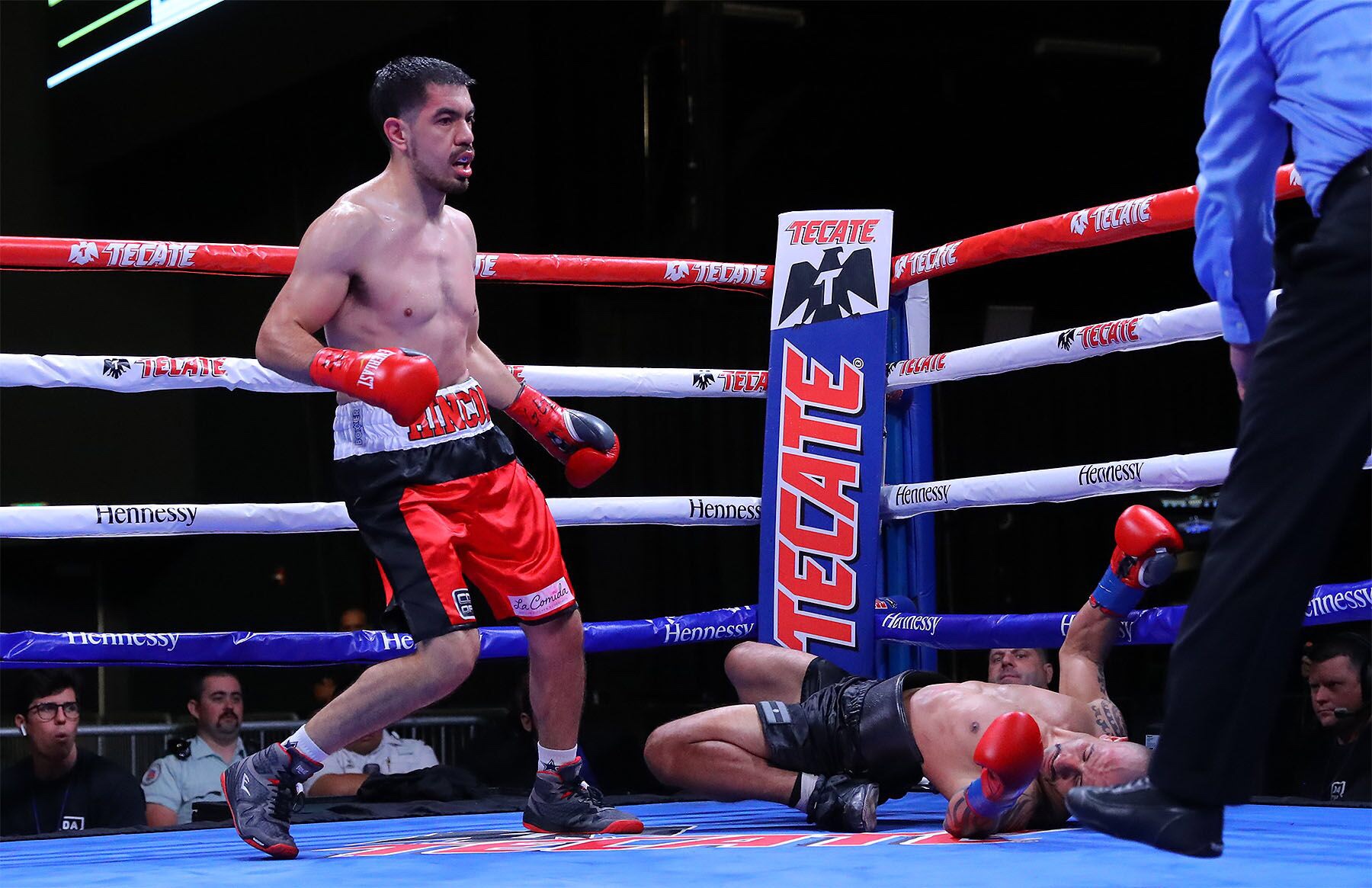 “We went in there not being careless. We knew his style of boxing, so in this world it only takes one punch,” said George Rincon. “I took my time. I feel like I started a little bit slow to set it up, but overall what we worked on worked. The plan we went in with worked, and we are just glad for this victory.”
Joshua Juarez (9-0, 4 KOs) of Laredo, Texas beat Emmanuel Sanchez (7-14-1, 1 KOs) of Jackson, Missouri via unanimous decision in a six-round light heavyweight bout. Juarez won with scores of 60-54, 59-55, and 58-56. 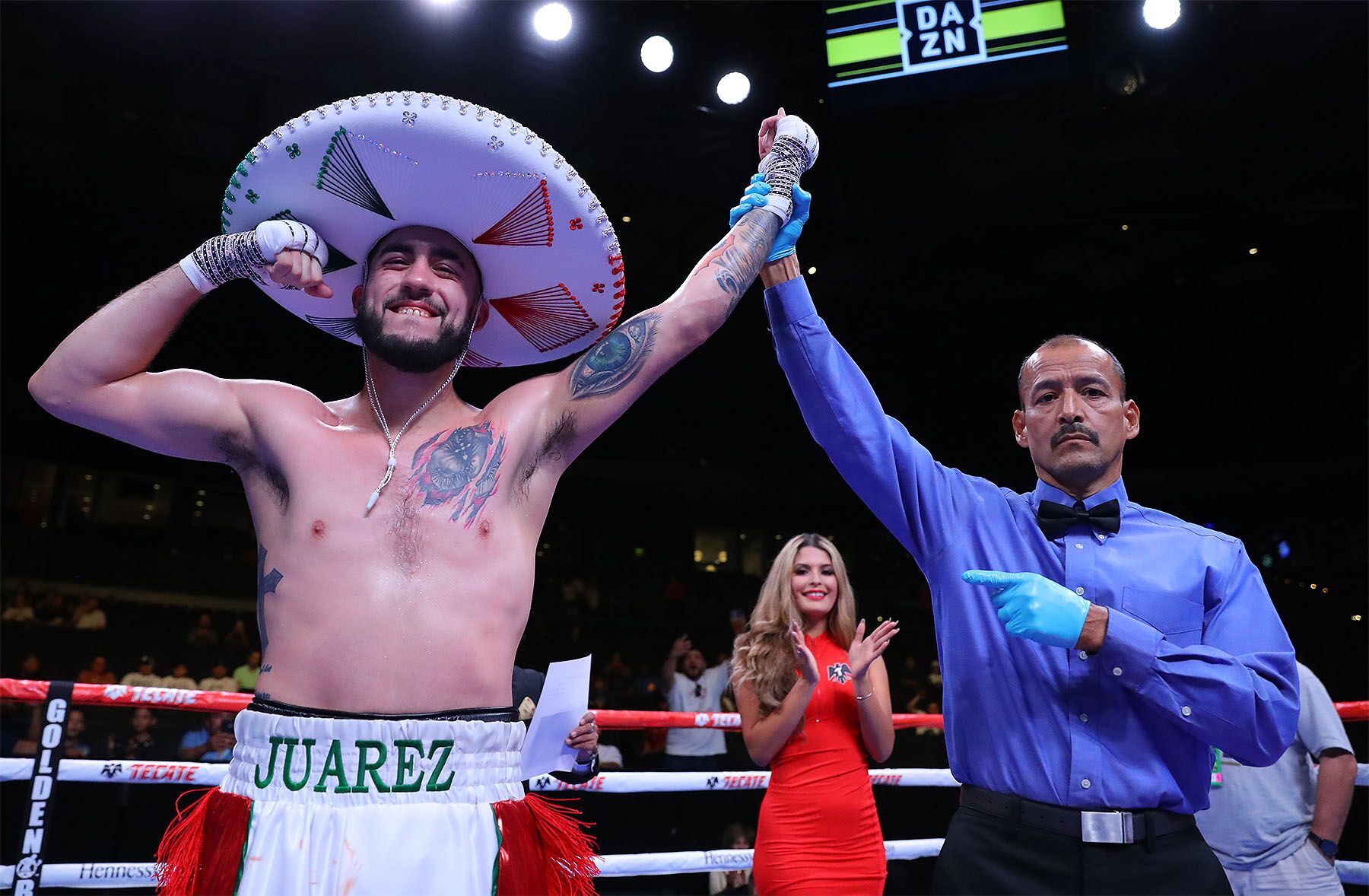 “My opponent was very awkward. When you are that old that’s the way is going to be,” said Joshua Juarez. “I was trying to adjust the whole time, but we figured it out. I felt like I dominated every round; a couple of shots I caught him, a couple of shots he caught me, but at the end of the day, the result came out the way it needed to come out. I won and I need more and more of this. I want to thank Golden Boy for giving me an opportunity, my Texas’ fans for showing up, and my trainer.”