GRAND PRAIRIE, TEXAS (Aug. 8, 2019): Vergil Ortiz Jr. (13-0, 13 KOs) and Antonio “Relentless” Orozco (28-1, 17 KOs) hosted their final press conference today at The Theatre at Grand Prairie in Texas ahead of their 12-round fight for the WBA Gold Welterweight Title. They were joined by many of the undercard fights for this event. The fights will take place on Saturday, Aug. 10 at The Theatre at Grand Prairie in Texas and will be streamed live on DAZN.
Below is what today’s participants had to say at the press conference:
VERGIL ORTIZ JR., Welterweight Contender: 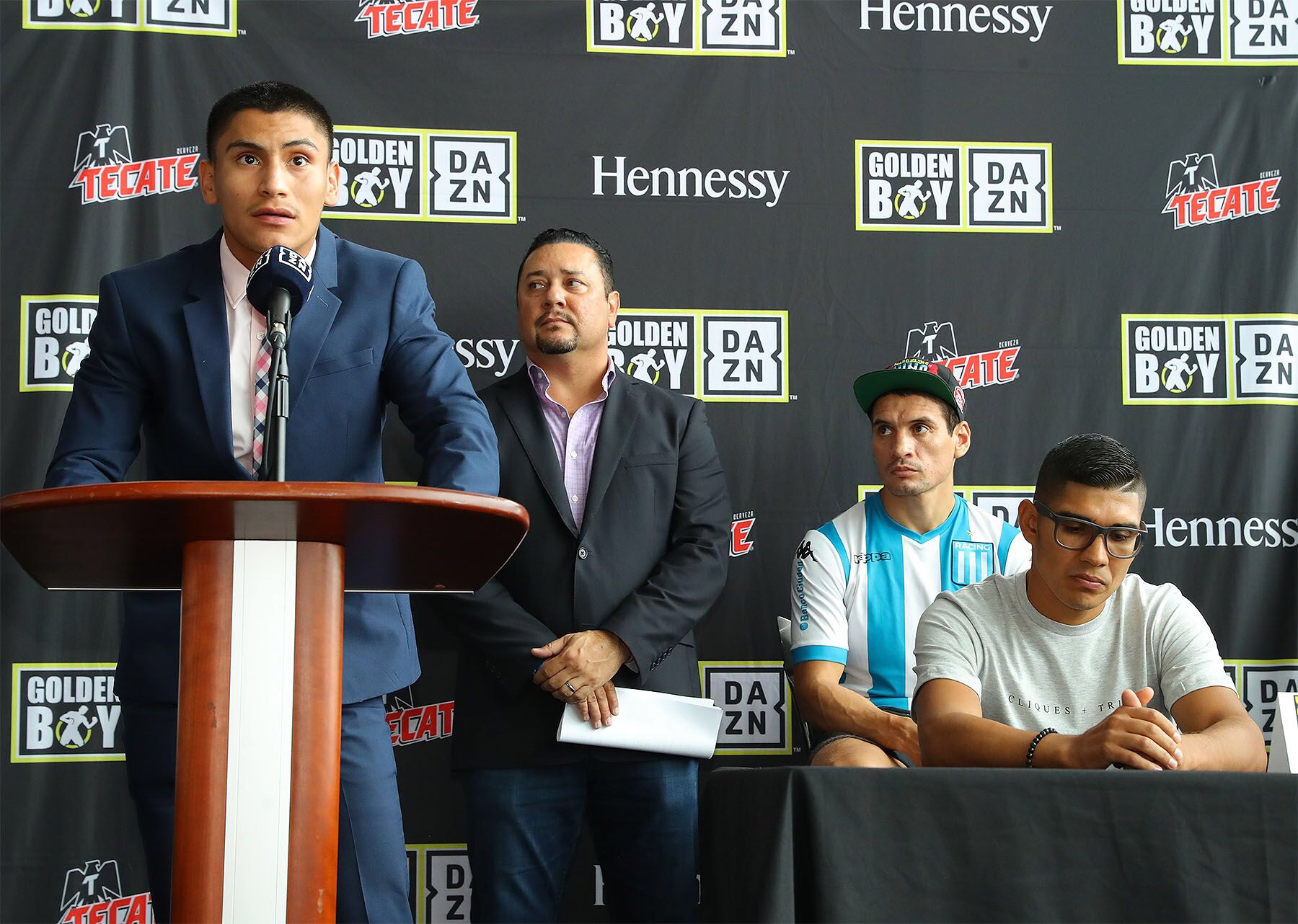 “I want to thank Golden Boy and Eric Gomez; he was the first guy to discover me when I was an amateur and gave me this opportunity, and I’m just really grateful for it. I think everything has been said already I’m not here to mess around. Golden Boy has given me some tough fights and I have passed them with flying colors, even though I’m color blind. Orozco is a very tough opponent, I’m not taking him lightly at all. He deserves all the respect in the world, especially on that ring. It’s sink or swim…good thing I’m a good swimmer. I’m just looking forward to seeing those familiar faces in the audience. Best of luck to Orozco. This isn’t personal, we are here to support our families.”
ANTONIO OROZCO, Welterweight Contender: 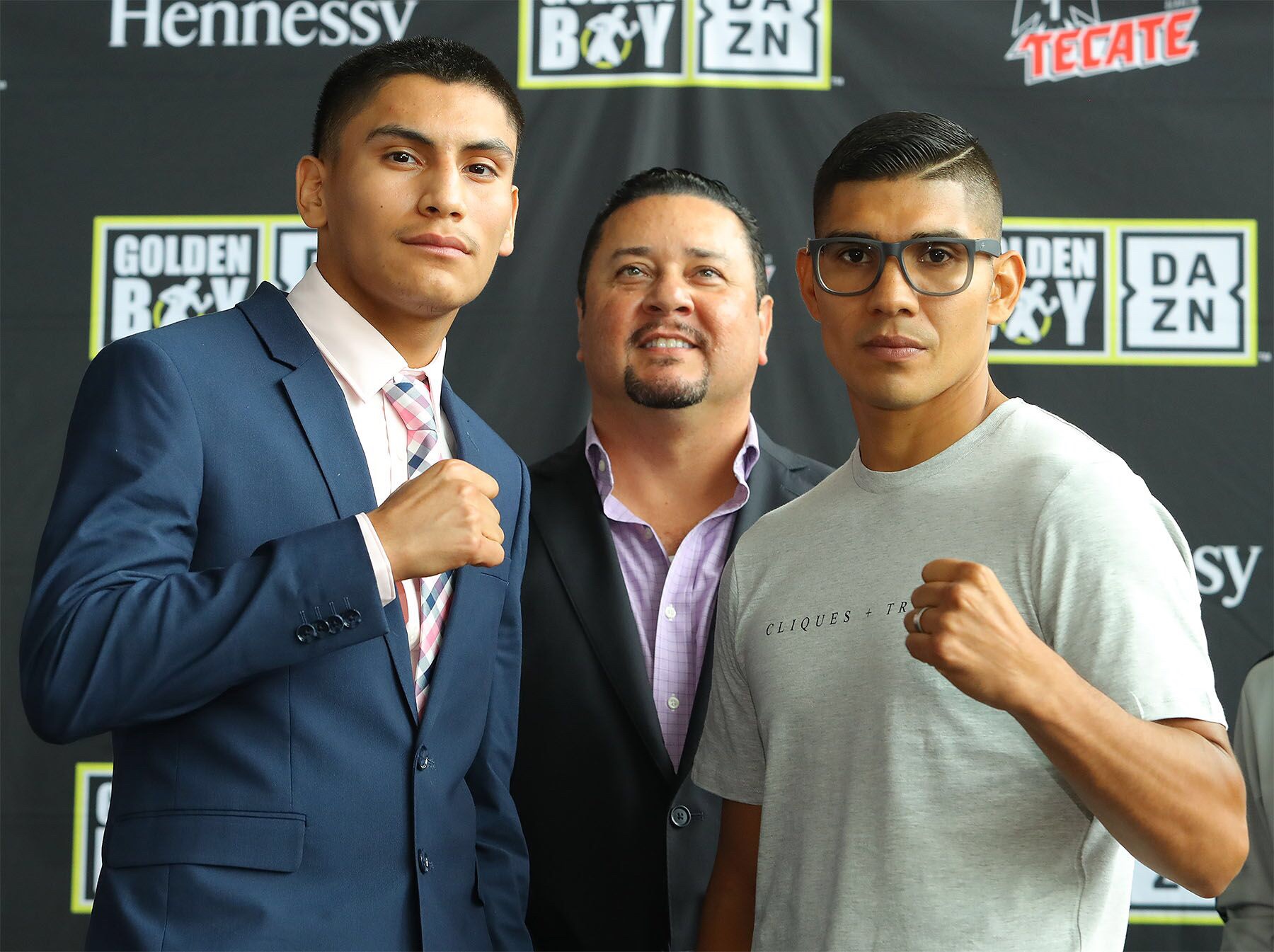 “First of all, I want to thank God for giving me the opportunity to be here. Texas is a big state and I know you guys are going to come strong, like that heat that’s outside. We know the tremendous fighter that Vergil Ortiz is, and everyone knows my style of fighting. This is going to be a fight you don’t want to miss. It’s a great opportunity, putting us both towards that world title shot again, and I’m looking for to that victory on Saturday.”
JOSHUA FRANCO, NABF & WBA International Bantamweight Champion: 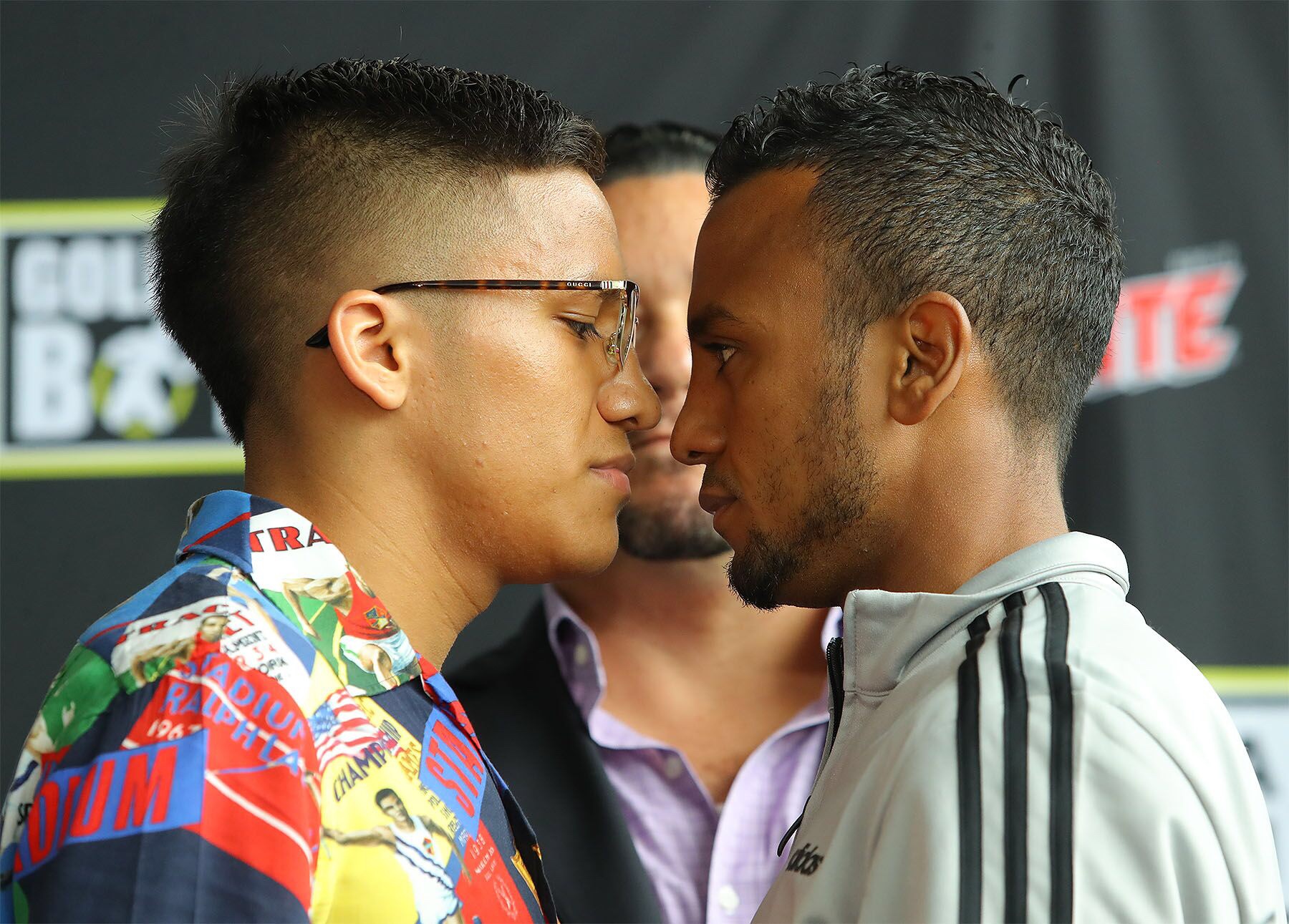 “Thank you everyone for coming out today. Thank you, Golden Boy and God, for this opportunity to fight once again. I hope everyone makes it to see a very explosive card. I think I won the first one, I won the second one, and this time is even going to be worse for him.”
OSCAR NEGRETE, Bantamweight Contender: 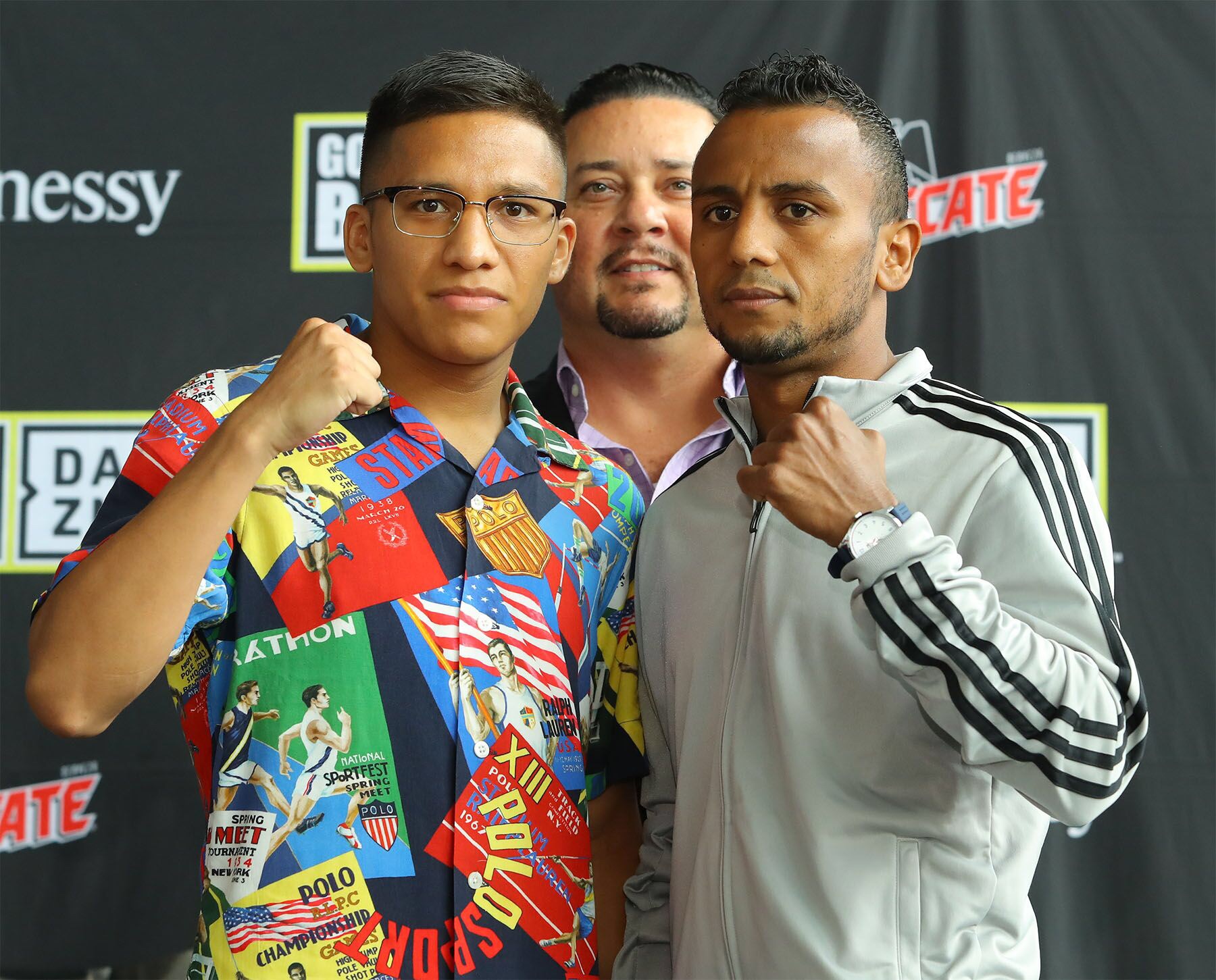 “As you all saw, I fought two exciting fights in the past, those two fights were very good fights, emotional fights, where I felt like I won, and most people have told me that I won. I’m here to prove that I won and show that I am the true champion. This time I have prepared like never before, even better than the first two fights, and I hope Joshua Franco is prepared and I hope that this time, he comes to fight and not to run.”
MARCELINO LOPEZ, Super Lightweight Contender: 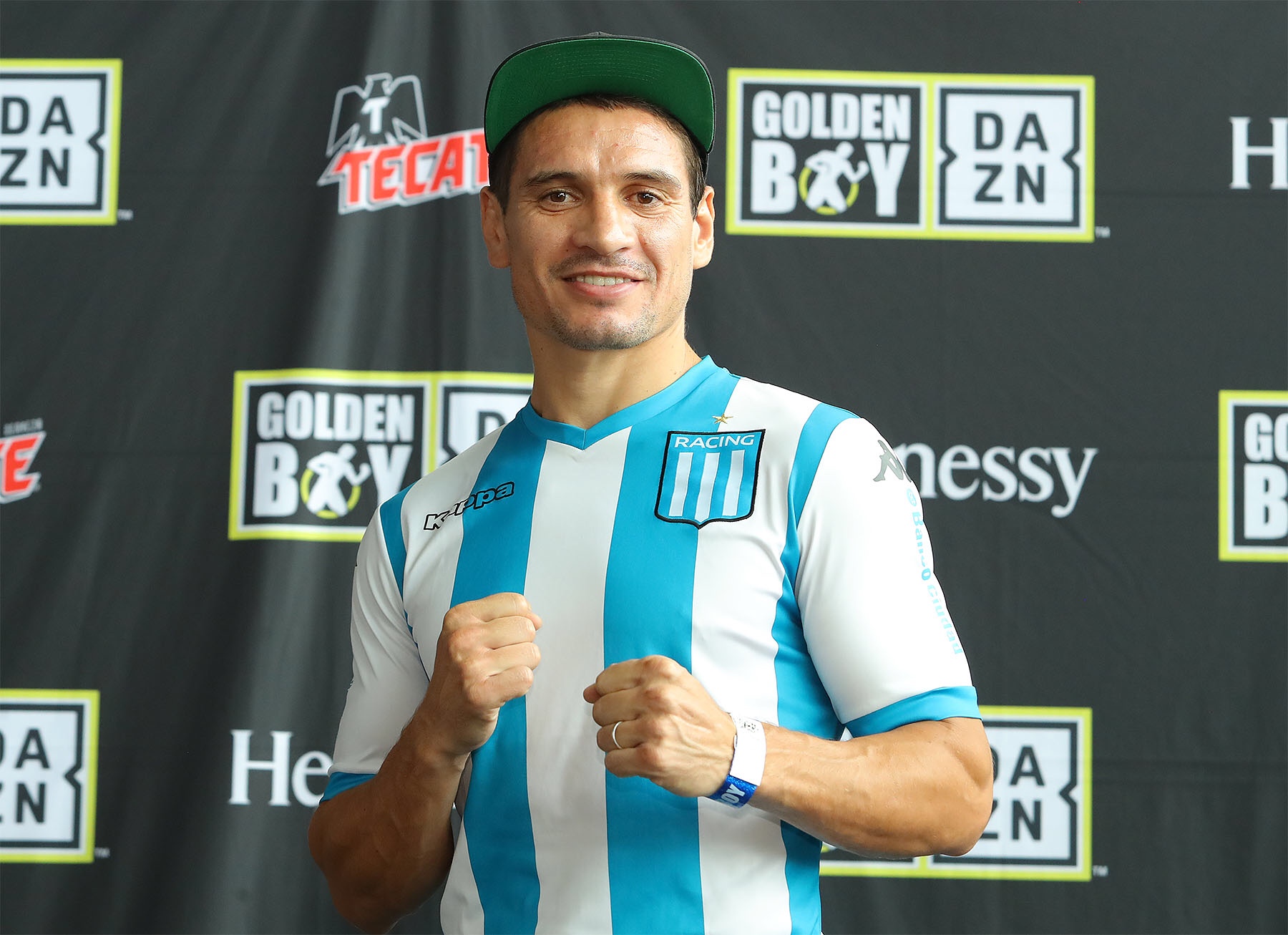 “I’m happy to be part of this event. It’s a great opportunity to be on this card. I’m prepared for what I came for, and I’m ready to show it on the ring. Anything I could say right now is irrelevant if I don’t show it on the ring. To be fighting alongside my ex-stablemate, Vergil Ortiz Jr., is great and I’m here to put on a great show and I’m proud to represent Argentina on Saturday.”
HECTOR TANAJARA JR., WBC USNBC Lightweight Champion: 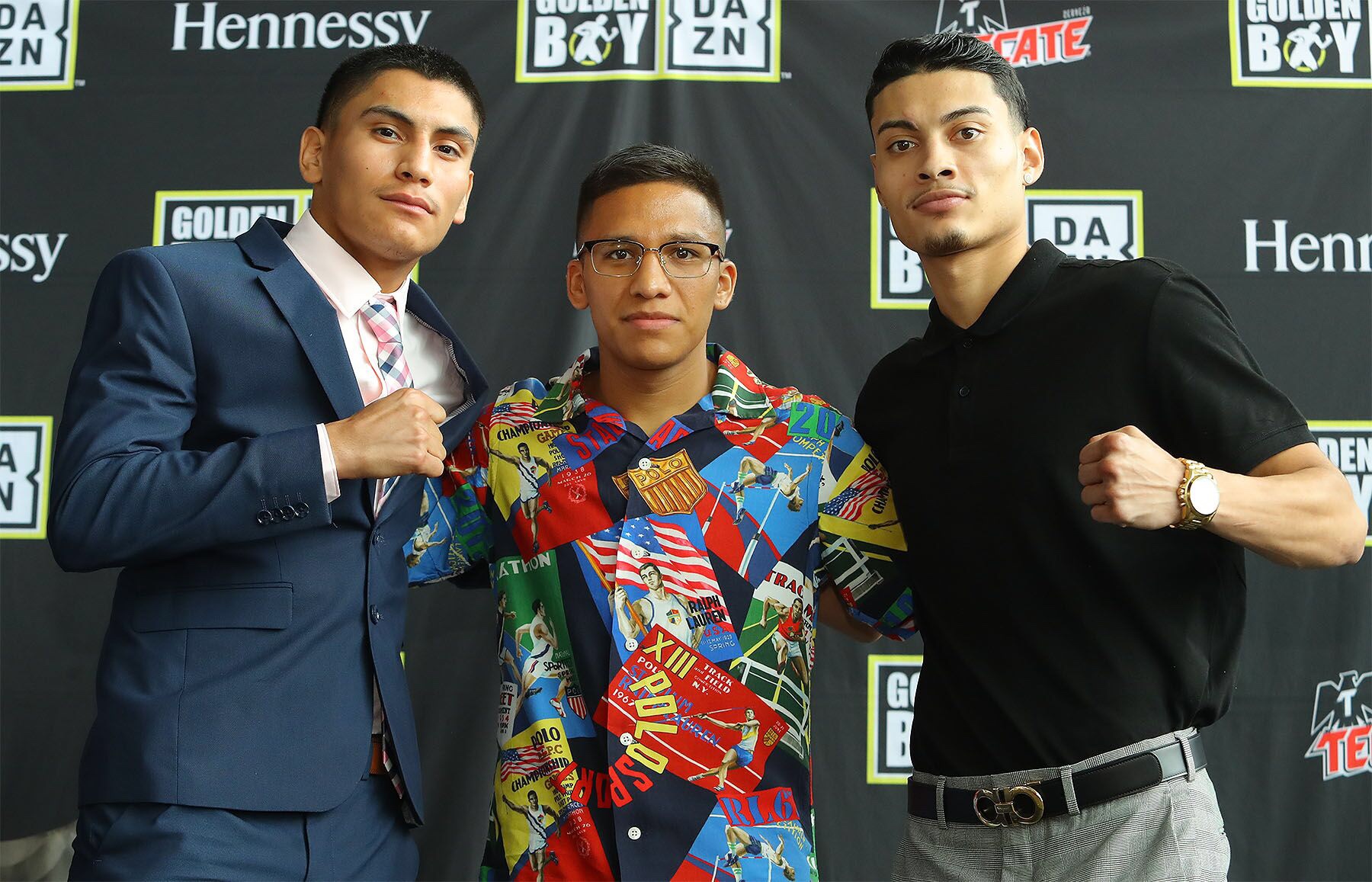 “I want to thank Golden Boy, DAZN, everyone for coming out. I want to thank my team for getting me ready; without them I wouldn’t be where I am today. I’m ready for Saturday and to put up a great show.”
TRAVELL MAZION, Super Welterweight Prospect: 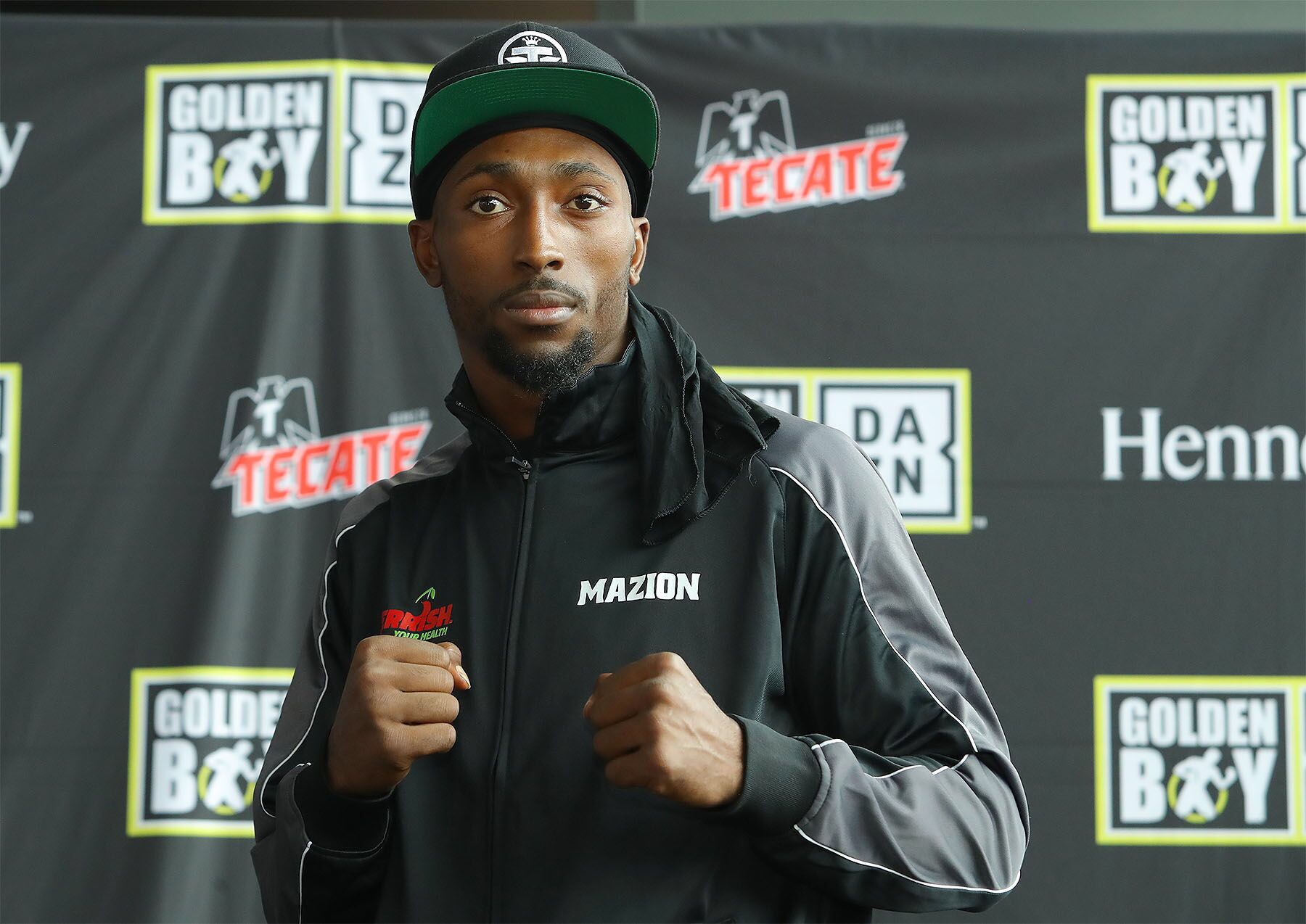 “I’m originally from Austin, Texas so it feels pretty good to actually be here, to be fighting in front of my old fight friends from the amateurs. Alex, George, Hector, we were always in the same locker room, getting ready for the fights together, it feels really awesome. I want to take this moment to dedicate this fight to the victims of El Paso and Dayton, I definitely want to dedicate my fight to them.”
ALEX RINCON, Super Welterweight Prospect: 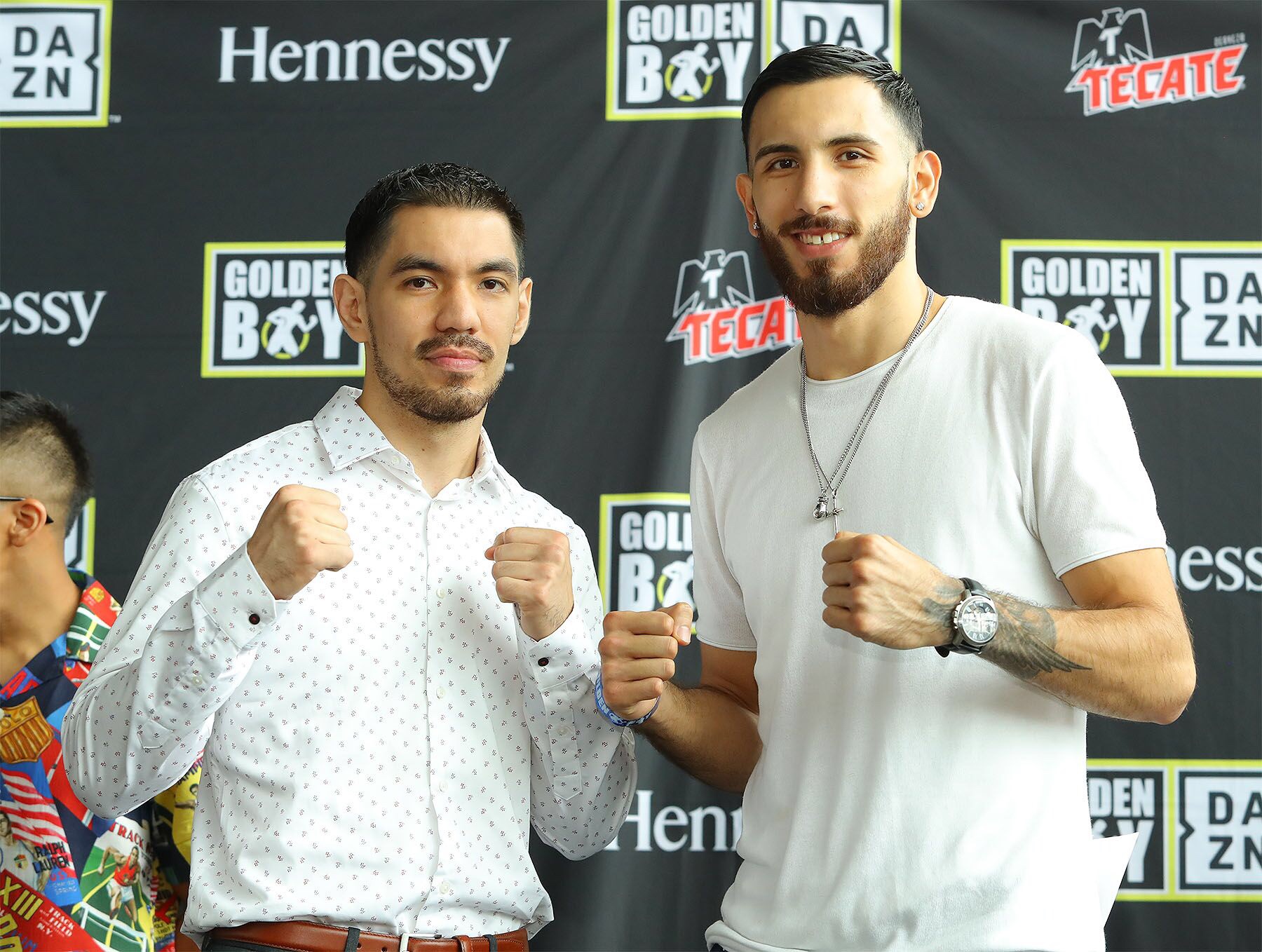 “I just want to thank Golden Boy and DAZN for having us here today. Thanks to everyone here who came to support all the fighters. It’s going to be a great, great show for all the fighters here on the card. As my brother said, we grew up with a lot of these fighters as amateurs, seeing each other in the tournaments, seeing each other on the bout list, but it’s going to be an even greater feeling being in the locker room, warming up next to each other and seeing each other rack up those wins. It feels great to be home. A great, great show is going to be put on Saturday night. Get your earplugs ready because the team Rincon brothers are going to bring a lot of noise on Saturday.”
GEORGE RINCON, Super Lightweight Prospect:

“To be on this stacked card with all these great fighters that I grew up with in the amateurs, it’s a great blessing to be here fighting on the same card. Vergil being the main event and a great fight, all these guys, and of course my brother, fighting with him on the same card is always a great experience, especially here at home. We’re always pushing each other to be greater every time. I’m excited to perform on Saturday night. Training camp went well, weight is good, and I feel great. We have a game plan for the fight and hopefully it won’t take too long to take my opponent down.”
TRISTAN KALKREUTH, Cruiserweight Prospect: 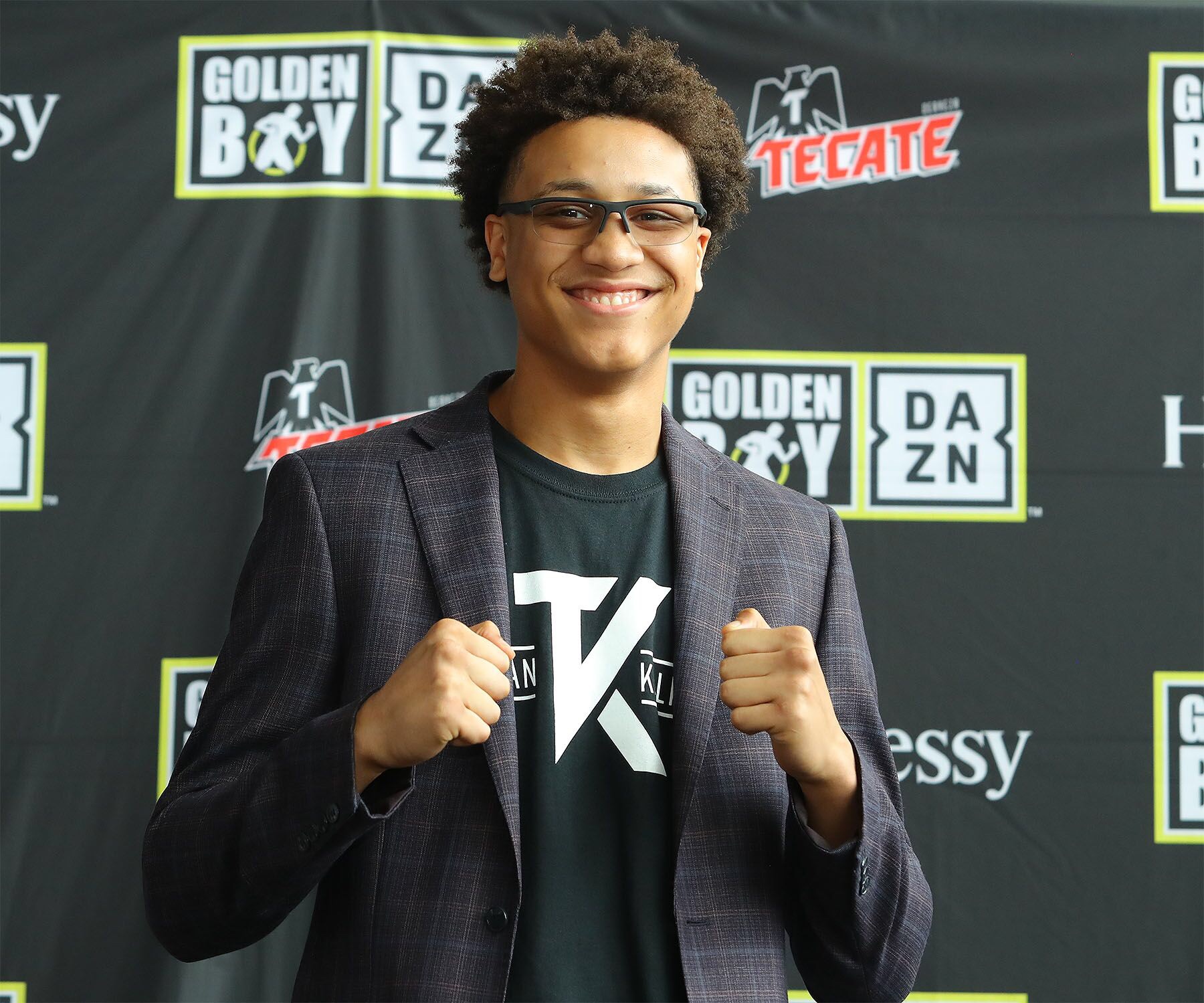 “Without the environment I grew up in with my family, I would be going in a different direction than where I am today. We finished training camp with a bang, we’ve been preparing for this fight with Ronnie, we’ve been working on staying tighter, working my jab more, step back and counter. It’s crazy because me and Vergil, we came from the same high school, so it’s awesome. I used to watch Vergil when he was an amateur TKO’ing people in Golden Gloves. I looked up to him at one point, and it’s just awesome seeing where he is today and for me to be able to fight on the undercard.”
ERIC GOMEZ, President of Golden Boy: 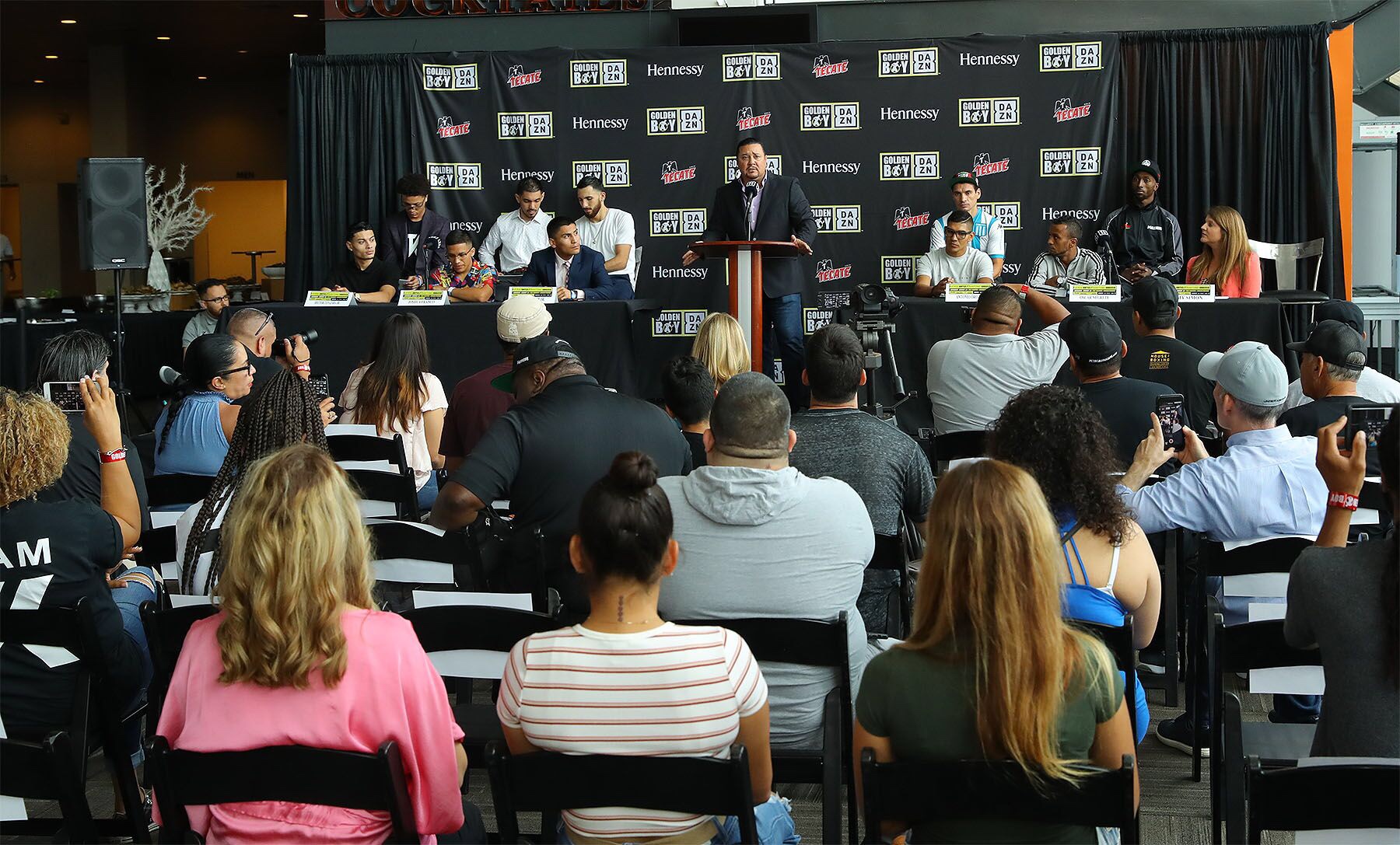 “We are committed to bring these types of events and happy to be back in the great state of Texas. I want to take our sponsors Tecate and Henessy who are very instrumental in helping us put these types of events together. This is a very nice arena and is great for boxing. I think the fans and media are going to enjoy the setting because is an intimate setting. You all are going to be right in front of the action. Everyone here at the Theater at Grand Prairie has treated us well. This is the beginning of a long relationship and I think the fans are going to love it on Saturday.”