The scores for the 122-pound bout were 99-91 twice and 98-92, all in favor for the young and talented Leo, who came in with a tactical game plan to attack the body, keep swift movement, and tight defense, all working to Leo’s advantage in tonight’s win. 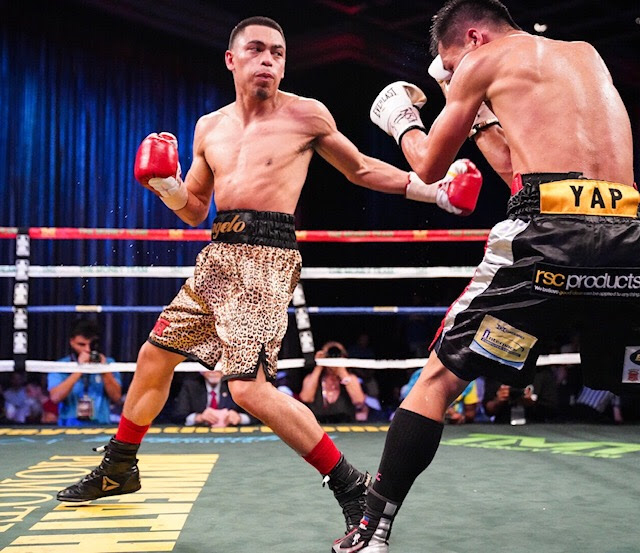 “My strategy is to always go for the body, like they say, attack the body and the head will fall.

“I’m thankful for my fans who came out tonight to support me and my stablemates. All I can do is continue to get better and better and bring in more victories like tonight.”

“Keith Hunter fought a very smart fight and I was impressed with his conditioning, and he beat another one of our guys. Newman looked super sharp and is ready for a step-up fight in his next one. Cortes looked great going to the body tonight to get the knockout win, and Lee fought a great fight tonight. All of tonight’s fights were exciting matchups.”

The highly-anticipated matchup of the night between Cameron Krael 16-14-3 (4KO’s) and Keith Hunter 11-0 (7KO’s) went the distance. Krael found difficulty getting in a groove and Hunter took advantage. After 10 brutal rounds of action, Hunters jab and constant pressure was too much for Krael. Judges scored the bout 93-97, 92-98 twice all in favor of Keith “The Bounty” Hunter.

“I proved that I’m going to be a problem for everyone in the super lightweight division. Krael showed a lot of heart, but I’m on another level and it showed tonight, said Hunter.
“I’m ready to step up against anyone, anywhere. Bring on all the contenders and champions at 140 pounds!”

“He was the better fighter tonight. There’s no excuses, said Krael.”

“I came into the fight feeling great, I just couldn’t really find my comfort spots in the ring and it showed. I got to get back in the gym and work on my jab and defense.”

Opening tonight’s triple-header co-feature, undefeated Las Vegas native, Andres Cortes 12-0 (7KO’s) who scored a spectacular stoppage over Mexico’s Sergio Lopez 22-15 (15KO’s) in round 3. Cortes kept the pressure on Lopez, breaking his body down round after round until Lopez was forced to take a knee ending the fight.

“He was breathing hard, that’s when I knew I got this fight and went for the attack. I got touched a little bit, so I’d rate my performance an eight. There’s a few things I need to work on when I get in the gym, but other than that I’m ready for what and who’s next, Cortes said.”