NEWARK, N.J.  (June 10, 2019) — Shakur Stevenson, born and raised in Newark, New Jersey, and closing in on a world title shot, is coming home. Stevenson, a 2016 U.S. Olympic silver medalist and the WBO No. 1 featherweight contender, will face fellow unbeaten Hairon Socarras in the 10-round main event Saturday, July 13 at Prudential Center, home of the NHL’s New Jersey Devils.

In the co-feature, fast-rising bantamweight contender Joshua Greer Jr. will face Nikolai Potapov in an IBF eliminator for the organization’s No. 2 ranking.

Stevenson-Socarras and Greer-Potapov will be televised live on ESPN and ESPN Deportes beginning at 10:30 p.m. ET/7:30 p.m. PT.

The entire undercard will stream live on ESPN+ — the leading multi-sport streaming service — starting at 7 p.m. ET. 2008 Olympic bronze medalist Vijender Singh (10-0, 7 KOs), India’s most prominent professional boxer and the only Olympic boxing medalist in his nation’s history, will make his long-awaited return on the undercard in an eight-round super middleweight bout. Singh’s countryman, top super welterweight prospect Vikas “The Indian Tank” Krishan (2-0, 1 KO), will see action in a six-rounder. 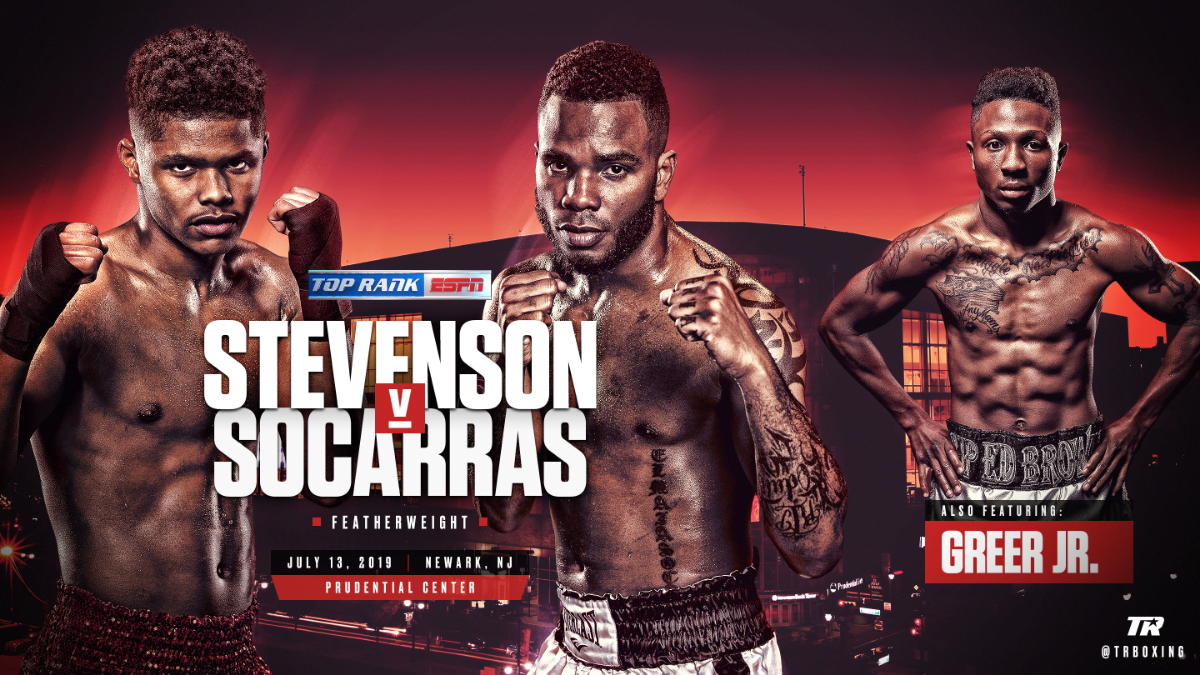 “Newark, I’m coming home! I’ve wanted to fight at Prudential Center since my pro debut, and the time has finally come,” Stevenson said.  “I haven’t fought in Newark in over four years, and I promise it will be worth the wait.  On July 13, I’m going to show the ESPN audience and Hairon Socarras what Brick City is all about. Socarras is an undefeated fighter, but he has never been in the ring with anyone like me. This is my first main event, and my hometown fans are going to see the best Shakur Stevenson yet.”

“I am so excited to be on such a big stage,” Socarras said. “I am looking forward to fight night. This is what boxing is about. I will bring my ‘A’ game and give it my all. I have a surprise for Shakur. I have the utmost respect for my opponent until the bell rings. Although my mother isn’t here on earth any longer, I want to thank her for all the great years she gave me, and this one’s for her. Thank you to ESPN for this platform, and Top Rank for giving me a shot at their top prospect. I’m coming to win.”

“I’ve been ready for these types of fights. I’ve been perfecting my craft every day, and I’m ready to put on a great show,” Greer said. “I’m going to continue to be Mr. ESPN, and watch out, I have something special planned for everyone who tunes in. Potapov looks like my toughest fight on paper, but he’s an average fighter. I’m going to show that there are levels to this game. He will be exposed because I am on a different level. I’m the best fighter he ever fought.”

Stevenson (11-0, 6 KOs) returned from the 2016 Rio Olympics as one of the sport’s most highly touted prospects. He graduated from prospect to contender status in 2018, knocking out longtime contender Viorel Simion in one round as the ESPN-televised co-feature to the Terence Crawford-Jose Benavidez fight in Omaha, Nebraska. Stevenson shined on the Crawford-Amir Khan pay-per-view undercard April 20 at Madison Square Garden, dominating former world title challenger Christopher Diaz over 10 rounds.

Socarras (22-0-3, 14 KOs), who moved from Cuba to Miami at the age of 11, is an eight-year pro who is taking a massive step up in competition against Stevenson. A 5-foot-6 boxer-puncher who has competed as high as lightweight, he is 6-0 with three knockouts since the start of 2018, most recently knocking out Jesus Martinez in five rounds on May 10 in Hollywood, Florida.

Greer (20-1-1, 12 KOs) has emerged as one of the bantamweight division’s hardest punches, as he’s riding a seven-bout knockout streak dating back to early 2017. The Chicago native will be making his second consecutive ESPN appearance. Last time out, Feb. 15 in Hinckley, Minnesota, Greer got up off the deck in the third round to stop Giovanni Escaner in the eighth. Potapov (20-1-1, 11 KOs) has won three in a row since a TKO defeat to longtime flyweight and junior bantamweight world champion Omar Narvaez. Potapov was last seen on American airwaves in March 2017 when he edged Antonio Nieves by split decision. On that same card, Greer debuted his famed “Night Night” pillow celebration following his one-punch knockout over James Smith. Greer, whose pillows have become more elaborate with each passing fight, is having a special one designed for his New Jersey debut.