RENO, Nev. (June 6, 2019) –  Oscar Valdez is set to make the sixth defense of his WBO world featherweight title, and for the third time during his title reign, he will be facing an unbeaten challenger.

Valdez (25-0, 20 KOs), the pride of Nogales, Mexico, will defend his belt against upstart Jason Sanchez (14-0, 7 KOs) Saturday evening from the Reno-Sparks Convention Center in Reno, Nevada. Sanchez is an Albuquerque product who has upset the odds before.

Valdez is now two fights removed from the severely broken jaw he suffered in March of last year against an over-the-weight Scott Quigg. Sanchez burst onto the boxing scene last October, upsetting then-unbeaten Jean Carlos Rivera via 10-round decision in Panama City, Panama. But Sanchez, who received this title shot on a little more than a month’s notice, is ready to tackle the long odds yet again. Valdez bounced back from the broken jaw Feb. 2 in Frisco, Texas, knocking out Carmine Tommasone in seven rounds. 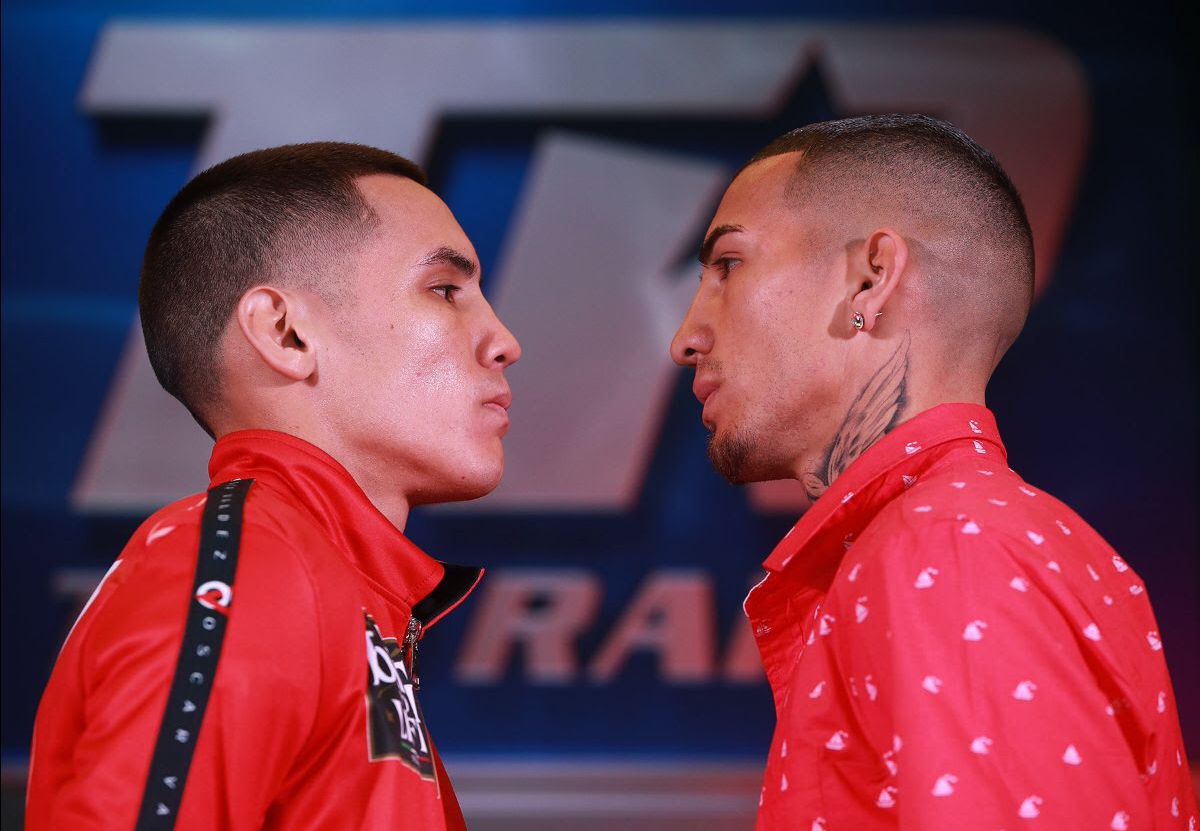 Two days before the bright lights, Valdez, Sanchez, and Flores met the media at the final press conference. This is what they had to say.

On his second camp with trainer Eddy Reynoso

“We’ve worked very hard in the gym. He’s put the time in. That’s one of the first things I thought could happen knowing he trains Canelo Alvarez, that I might not get the time I deserve in the gym to keep on improving. But on the contrary. We’ve been working very hard. Eddy has been 100 percent dedicated to me, and I can just say thank you to him for putting that time in, him and my father, my manager Frank Espinoza, my whole team.”

“I know Jason Sanchez. I know he’s a tough fighter, and I treat him with as much respect as any fighter out there. A lot of people might not know who he is. Unfortunately, in the boxing world, if you don’t know the opponent, they automatically think it’s an easy fight like he’s a bum, a walk in the park, a sack of potatoes, whatever anybody wants to call it. But I don’t see that. I see a young, hungry fighter with the same dream as any other fighter wants to have, which is become a world champion. I have that target on my back. I take no fighter lightly. I see Jason Sanchez as a strong opponent, and I’m going to do my best to win.”

“I don’t plan on leaving this belt anytime soon. I want to move and improve to bigger and better things. Right now, I got only one guy on my radar, which is Jason Sanchez. I got much respect for him and his team, but once the bell rings, all of that is over. We have to give a good fight for the crowd, for the fans all over the world that are watching. That’s what we plan to do, so I’m very excited for this fight, to be honest.”

“I expect the best from every fighter. I saw him when he fought Jean Carlos Rivera, the Puerto Rican. He put up a good fight. Congratulations to him for his career. He’s doing great. This is a dream every fighter has, fighting for a world title. That only makes me more disciplined in the gym. I work very hard in the gym because I worked hard to get here, and I don’t plan on leaving any time soon. I’m taking this belt back to Mexico.”

“There’s been so much going on {since the Rivera fight}, but it’s awesome. I’ve been working hard. I’m ready.”

“We knew beating Jean Carlos Rivera would mean we’d get more opportunities for more stuff. And, yes, sure enough.”

On getting the call to fight Valdez

“I was excited. We took the fight right away. He’s a tough guy. I’ve seen him fight before, but we’re ready.”

“I just need to fight hard and stay smart and active. Bringing the title home to Albuquerque would mean so much.”

“Let’s keep the ball rolling. I feel good, I feel confident, and fighting under Oscar Valdez is a big opportunity. I’ve been in his training camp and everything, so it’s great to fight {on the same card} as him. I’m always in the gym. This is my life, day and night. This is what I do, so to fight again, I’m ready.”

On fighting in eight-rounders now

“More mitts, more rounds of sparring, more conditioning. It’s perfect because I’m still in shape from my last fight {May 4}, and we jumped right into training camp. I did enough six-rounders, and here’s the eight-rounder. We’re ready.”

Use the hashtags #ValdezSanchez and #FloresBriceno to join the conversation on social media.