( June 4, 2019 – Los Angeles, CA) – The World Boxing Council, UPAC (United Peace Officers Against Crime), Los Angeles Sheriff’s Department and USA Boxing have united once again to bring Southern California the 5th Annual Green Belt Challenge June 13, 14, 15 at South El Monte High School. This three day show is COMPLETELY FREE to all participants, family, friends, fans and community! It is truly a one of kind event that has become of of the Nation’s biggest Amateur Shows. Some of Boxing’s Top prospects have either participated or been Champions of the past Green Belt Challenge, like 2016 U.S. Olympian Karlos Balderas, Top Rank’s Chris Zavala, Golden Boy’s Rommel Caballero. Due to an overwhelming request by gyms, this year we will have TWO rings instead of one, we expect over 300 boxers to come by for bouts and have TWO ELITE bouts, one male, one female which will be announced soon. 2012 U.S. Olympian Joseph Diaz Jr.is this year’s Ambassador and he is so proud to be part of this event, especially because it is al his Alma Mater, South El Monte High School. The Green Belt Challenge is also honored to welcome WBC President, Mauricio Sulaiman, for the first time to this great event, as well as Los Angeles Sheriff, Alex Villanueva. 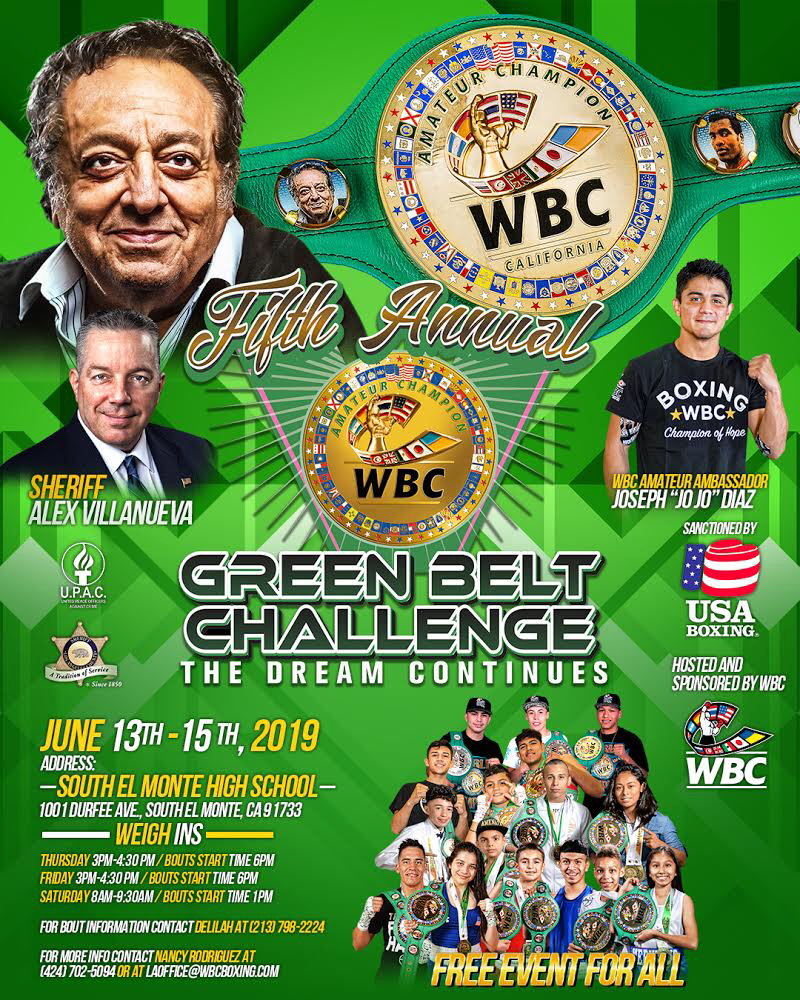 Every year we have many Champions and fighters who come support the event, below is the list of confirmed fighters we have thus far:
JOSEPH DIAZ JR.
MIKEY GARCIA
SHANE MOSLEY
BAM BAM BRANDON RIOS
MARICELA CORNEJO
LEO SANTACRUZ
DANNY ROMAN
ARNOLD BARBOZA
CHRIS ZAVALA
GEORGE NAVARRO
ISRAEL VAZQUEZ
JOET GONZALEZ
JOSEPH LANDEROS
JUAN BARAJAS
MERCITO GESTA
MICHAEL DUTCHOVER
RUBEN TORRES
SAUL SANCHEZ
SULEM URBINA
DANIEL PONCE DE LEON
RONNY RIOS
ALEXIS ROCHA
AND MORE CONFIRMING DAILY!
We have many surprises in store for all the guests in attendance, including one from The Santacruz Family, and one from the WBC we cannot reveal but you sure don’t want to miss it! We will also be dedicating this year’s show to an Amateur Boxer who participated last year and won, Jose Andres Huerta. Huerta was hit by a car while riding his bike home from the gym a few months ago and unfortunately passed away. The Huerta Family will be in attendance on the last day of our show, June 15, as we will have special words from our President for the Family.
The Green Belt Challenge Team appreciates all support for this event as every single person you see working this event is volunteering their time 100%. It’s done for the love of Boxing, for the love of the community, to give back to our future Champions.
WHAT: 5TH ANNUAL GREEN BELT CHALLENGE
WHEN: JUNE 13, 14, 15
TIME: JUNE 13,14 at 6pm / JUNE 15 at 12:30pm
WHERE: SOUTH EL MONTE HIGH SCHOOL, 1001 DURFEE AVE., SOUTH EL MONTE, CA 91733