Ahead of Saturday’s stacked Memorial Day weekend boxing event live on DAZN in the US and on Sky Sports in the UK, the fighters gathered in front of media at the National Harbor in Oxon Hill, Maryland, for the final press conference.

On Saturday evening, undefeated Lightweight sensation Devin Haney (21-0, 13 KOs) of Las Vegas will make his DAZN debut against Mexico’s Antonio Moran (24-3, 17 KOs) in the scheduled 12-round main event. The co-feature of the evening will feature Croatia’s Filip Hrgovic (7-0, 5 KOs) taking on Gregory Corbin (15-1, 9 KOs) of Dallas, Texas, in a Heavyweight title scheduled for 10 rounds. Kicking off the action at 9:00 p.m. ET on DAZN, Michael Hunter (16-1, 11 KOs) of Las Vegas will look to extend his unbeaten streak at heavyweight when he faces off against Brazil’s Fabio Maldonado (26-2, 25 KOs) in a scheduled 10-round affair.

Three undercard bouts will air on DAZN beginning at 7:00 p.m. ET, prior to the main card at 9:00 p.m. ET. In anticipation of Saturday’s fights, Matchroom Boxing USA’s Eddie Hearn and the main card fighters spoke to a packed room of media in Maryland. 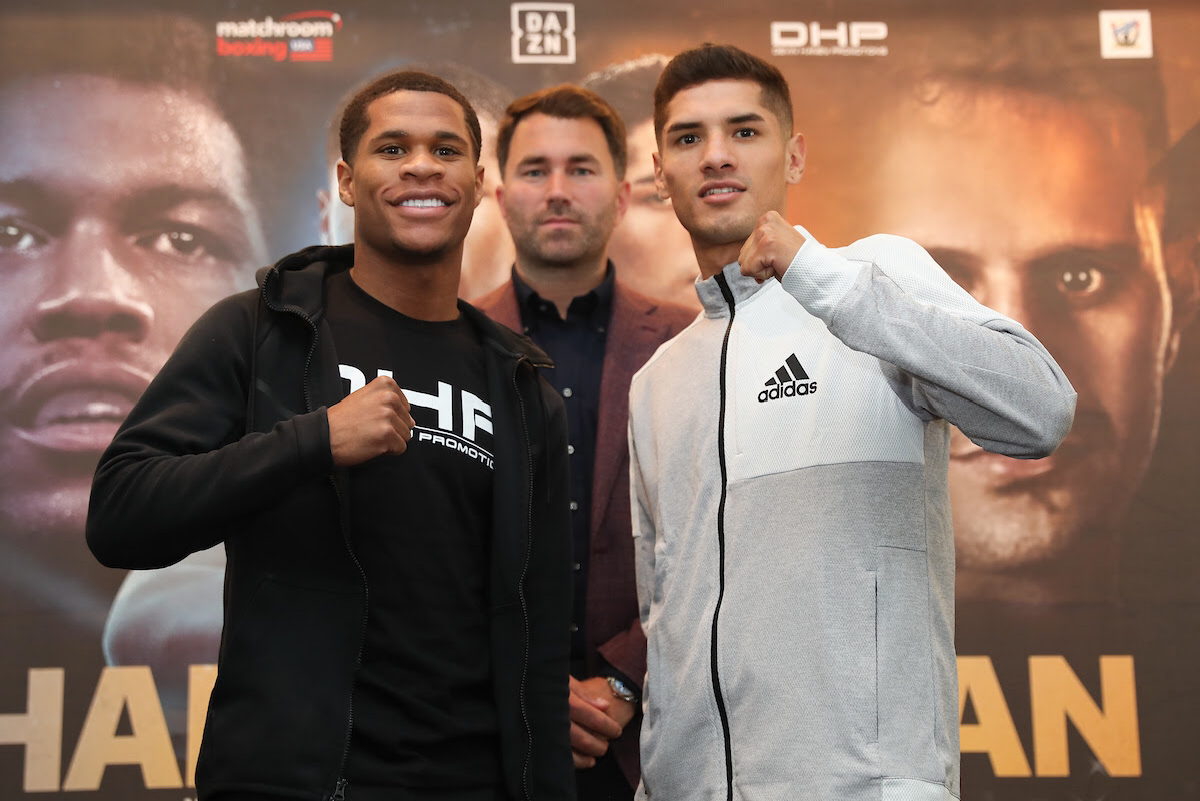 “I want to thank God, my dad, my team, Matchroom Boxing and DAZN. I had a wonderful training camp. I am feeling strong and ready. This is going to be my big breakout fight. I’m feeling it and I am excited to do it on DAZN. I am going to show the world who I am. Moran put up a great fight with Jose Pedraza but I’m not Pedraza. I’m different. I am going to prove it on Saturday and show you something that you have never seen before – especially from a 20-year-old.”

“I am really excited for this weekend’s fight. I am very excited, we had a great training camp in Mexico. We trained 9,000 feet up in the mountains. I am thankful to Matchroom and DAZN. I am planning to put all that hard work on the line on Saturday.”

“I am very glad to be part of this great event. I would like to thank my promoters and DAZN. I am excited for my American debut. It is an honor for me to fight here. For those who do not know, I come from Croatia, a small country in Europe. On Saturday night, I want to make my country proud.”

“I would like to thank Matchroom, DAZN and all of the other people who have helped me in my career. I am excited to once again fight in the DMV and fight at MGM. I have a determination about me. I refuse to be moved and I am excited to show all the fans what I have to prove in the heavyweight division.”

On the Heavyweight division: “The heavyweight division is in a great place and is bigger than ever. You have the biggest and best heavyweight in the world Anthony Joshua making his U.S. debut next weekend on DAZN against Andy Ruiz, Jr. You have Deontay Wilder with another piece of the heavyweight championship and he just scored a brilliant knockout over Dominic Breazeale last weekend. There’s former champion Tyson Fury fighting again soon. It’s a great time for the heavyweight division. But this weekend we have Michael Hunter. He is a guy who refuses to say no – he takes fights on short notice, he fights anyone you put in front of him. He is a guy who is determined to get a title shot sooner rather than later and I think he is going to prove this weekend why he is deserving of that shot.”

On Devin Haney: “I am proud to stand here today as Devin Haney’s promoter. Not only do I think he is one of the best young fighters in the world, but he is also a great man and a good ambassador for the sport. He is inspiring a generation of kids coming up and he shows them what is right and how to conduct themselves. Well done to his father Bill for raising a great young man, he is a fighter I would never worry if he is training and working hard and staying on the straight and narrow. He is a great kid and the talent he possesses is different. He is 20-years-old, just 20! He is well beyond his years. Devin has a real tough fight this weekend in Antonio Moran and he needs to prove his abilities. Devin’s talent is incredible. He has skills to burn. He has all it takes to be the next biggest fighter in the United States.”