Pacquiao and Thurman will square-off in a welterweight world title attraction that headlines a PBC on FOX Sports Pay-Per-View event beginning at 9 p.m. ET/6 p.m. PT. Plant will make the first defense of his title against the unbeaten Lee in the main event of FOX PBC Fight Night and on FOX Deportes preceding the Pay-Per-View and beginning at 7 p.m. ET/4 p.m. PT.
Tickets for the event, which is promoted by MP Promotions, Mayweather Promotions and TGB Promotions, are on sale now and can be purchased online through AXS.com, charge by phone at 866-740-7711 or in person at any MGM Resorts International box office. Plant vs. Lee is presented by TGB Promotions and Sweethands Promotions.
Here is what the fighters had to say Tuesday from Gotham Hall in New York City: 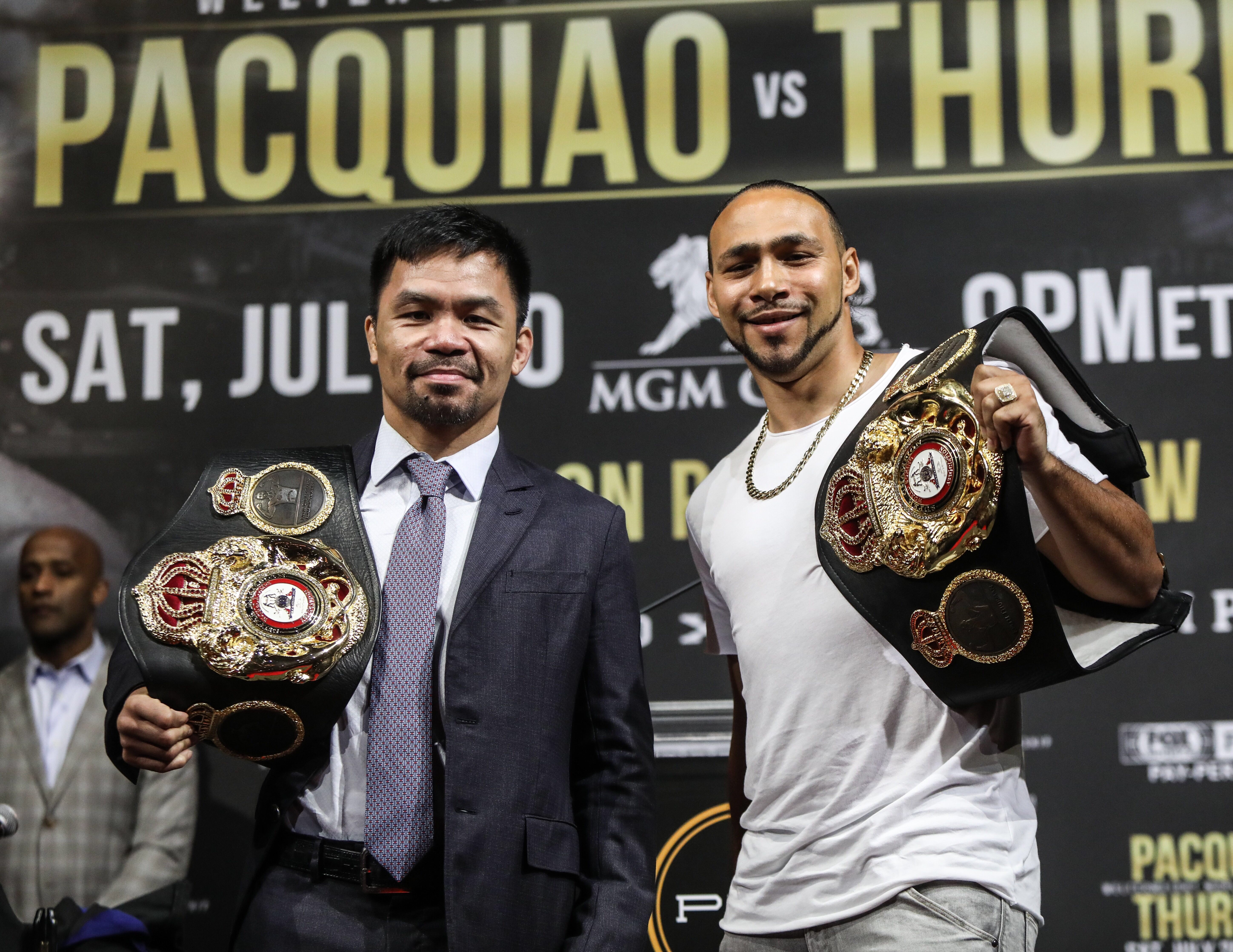 PHOTOS BY: DARNELL ELLERBE FOR MAYWEATHER PROMOTIONS
MANNY PACQUIAO
“I’ve never been scared of a challenge. I’m so excited for this fight against an undefeated champion. He’s the kind of fighter that you can’t underestimate. His record and successe gives me more motivation to work hard. 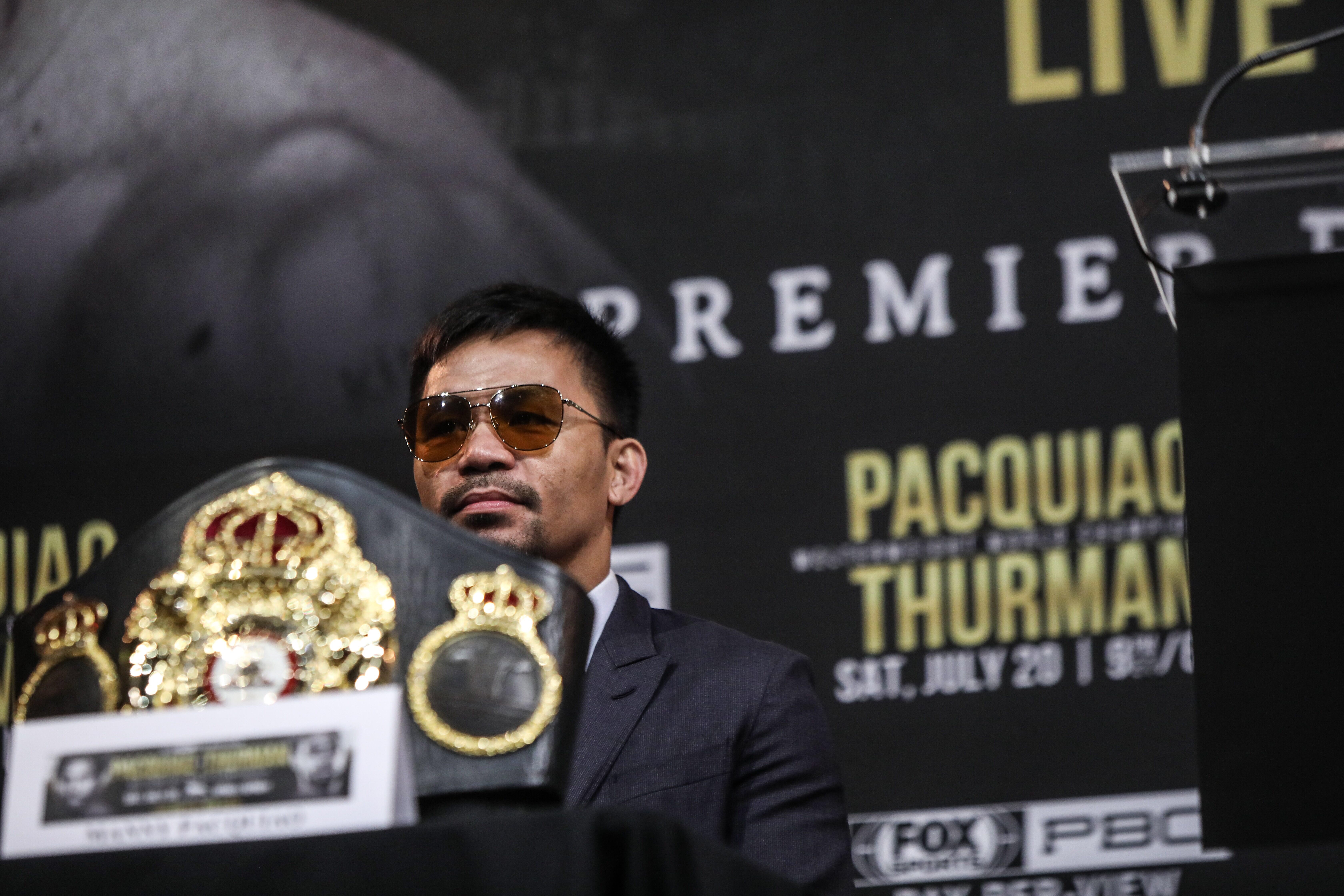 “I will make sure that I’m 100 percent and ready for this fight. We’ll find out what happens on July 20, but it’s going to be exciting. I like being the underdog for this fight because that gives me more focus in training.
“I’ve been careless and over confident in some fights, but this time around it’s different. Keith Thurman is a good fighter and we’re going to make sure the fans are happy on July 20.
“It’s a great honor for me to be fighting back in Las Vegas and on the FOX Sports pay-per-view. I’m going to take advantage of the opportunity.
“I chose Keith Thurman because he’s undefeated and I want to prove that at age 40 I can still beat a great fighter like Keith.
“My time is not yet over. My journey is continuing. I’m going to prove that and more on July 20 against Keith Thurman.
“I’m the kind of fighter that I don’t talk too much. I do my talking in the ring. I can do a lot of things in that ring. He can prove his words in the ring. I’m going to be a warrior on July 20 and show Keith Thurman what it’s like to be in the ring with me.
“I will work hard for this fight. I haven’t felt this motivated and excited since the Oscar De La Hoya fight. I feel like I’m back against the best fighters in the world.
“Our focus in every fight is on the speed and footwork, because those are advantages for me. We’re going to work on avoiding Keith’s offense.
“Fans should watch this fight because it’s a once in a lifetime showdown. We’re going to bring action and I’m confident I will be victorious.”
KEITH THURMAN
“We’re ready. This is a blessing to be here and a dream come true. I started boxing at the age of seven. I worked hard to be a champion and I’ve always wanted to fight the greatest names in the sport. 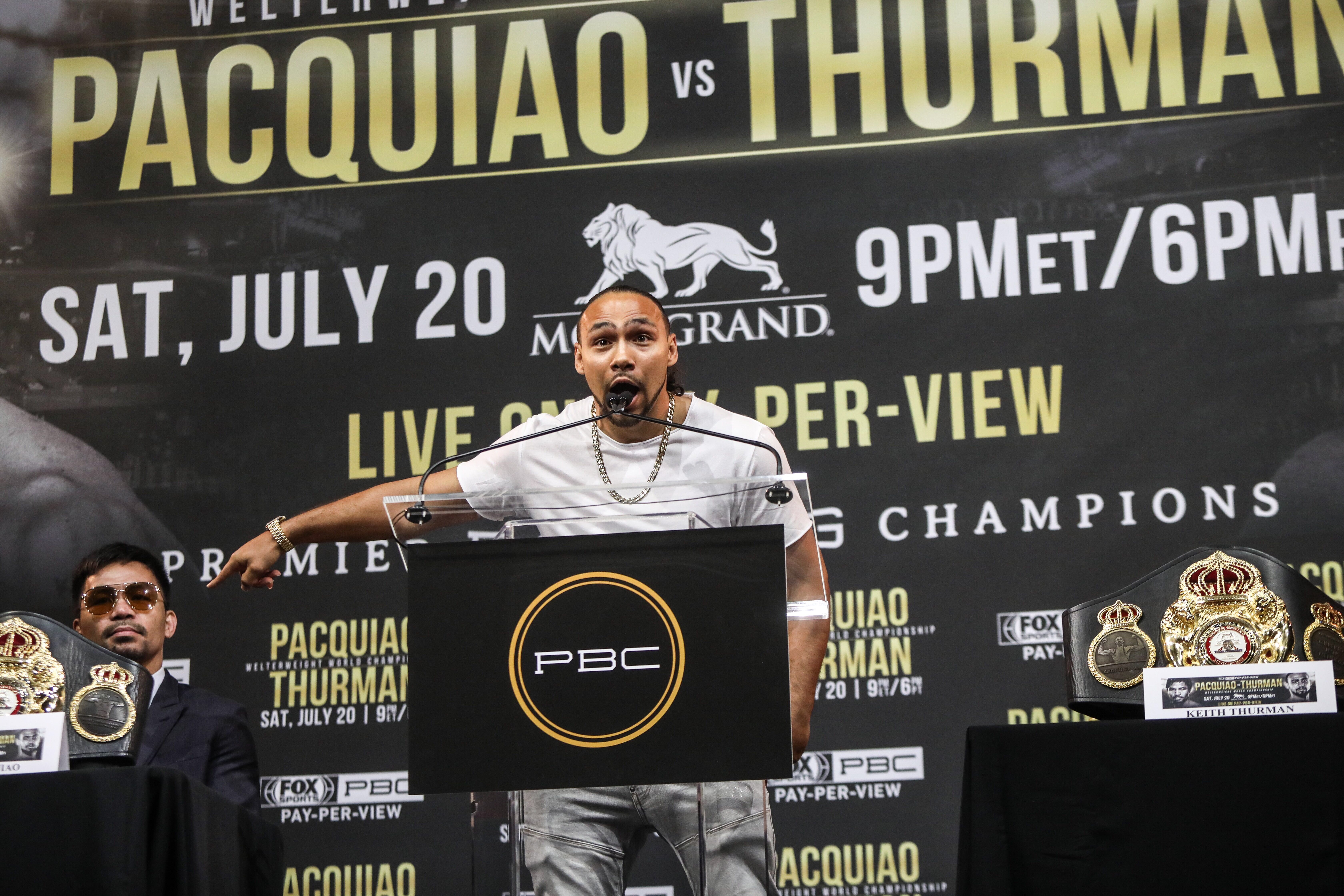 “Pacquiao wants a challenge and I’m very grateful to be sharing a ring with a legend. If you understand boxing history, you know that times change. I believe boxing is in a new era. Come July 20, Pacquiao will disappear. He’ll always be remembered in the sport, but I’m doing to Manny Pacquiao, what he did to Oscar De La Hoya.
“This is a big fight. I’ve waited 22 months to get back in the game. We had our ups and downs, but Keith Thurman is back on the rise. I’m going to make a big statement.
“This training camp is going to start this Saturday. Once I get home, it’s grind time and on July 20, it’s going to be my time.
“July 20 is 23 years in the making. I’ve dedicated myself to this beautiful sport of boxing for so long and my first trainer Ben Getty told me that I had what it takes to be a great champion. I’m truly looking forward to having another chance to show it.
“We definitely had a stretch with a lack of activity. Not everyone knows who Keith Thurman is today. You could see that I wasn’t at my best in January. But on July 20, ‘One Time’ is back. I’m getting ready to have one of my best training camps for this fight.
“I had the knockdown in my last fight that was a reminder of what ‘One Time’ is all about. We brushed the dust off and we’re taking that momentum into this fight.
“I’m excited to be the guy who shows Manny Pacquiao where the exit is. He’s a legend who’s done great things. But I’ve never lost to a fighter who’s lost seven times. I have no intention of losing this fight and I don’t see him winning in any shape or form.
“Speed, power and overall ring IQ will be the difference. I’m one of the smartest fighters in the sport. I always find a way to win. I know Pacquiao comes in shape, but he’s going to fall short of that finish line.”
CALEB PLANT
“I’ve been boxing my whole life. They say it takes 10,000 hours of work to become a true success at something. Come July 20, I’ll have been doing this for 18-years straight. No breaks and no Plan B. I’ve just been boxing, day in and day out.

“Mike Lee may have a financial degree, but in boxing, I have a Ph.D. That’s something he doesn’t know anything about. I came from very rock bottom, where nobody makes it out. If he thinks I’m going to let him mess this up for me, he’s not half as educated as I thought he was.
“I have everything to lose. Every night from now until July 20, I hope Lee and his team are envisioning the worlds ‘and still’. Because that’s all anyone is going to hear on fight night.
“It’s exciting to be on this primetime card. Everyone who wants to take it to the top of the sport wants to be a main event at MGM Grand. At the same time, where we fight is not most important to me. We can fight in the parking lot, because it’s about legacy to me.
“Anytime that someone steps into the ring and wins their first world title in fashion, it’s going to be a confidence booster. But I did tell everyone what was going to happen. There’s a season for everything and right now is mine.
“He may come into the ring bigger and heavier than me, but boxing skills are what wins fights. Years of repetition with boxing teachers, are what wins fights. You’ll see all of that on July 20.
“I don’t look at myself as the favorite in any fight. I’m the one who’s not supposed to be here. Put everyone through what I’ve been through, and see if they would make it here.”
MIKE LEE
“This has been a culmination of years of hard work and sacrifice. Most importantly, I’ve gotten somewhere no one thought I would get. I’m fine being the underdog. I have nothing to lose.
“I’m coming out with everything I have. This is everything I’ve ever wanted. I respect Caleb Plant, but on July 20, I plan on making it my moment.
“I’ve headlined cards in Chicago and at Notre Dame before so the bright lights are nothing new to me. I’m very excited and working hard. On July 20, I’m going to keep proving people wrong.
“The whole reason I got into this sport is to do it on big stages. Everyone wants to prove it on the biggest stage possible and there’s no bigger stage than at MGM Grand in Las Vegas. It’s a dream come true and it’s the reason I’ve worked so hard.
“Moving down in weight is an advantage. I’ve got a great team working with me to make the weight easily and rehydrate the right way. I’m going to be the bigger and stronger guy in the ring.
“I’ve had people that never thought I’d get here and I love it. It takes a different kind of person to step into that ring in front of so many people. You have to be ready to go out there and risk it all. I fight who they put in front of me and keep winning. That’s what I plan to do on July 20.”