BROOKLYN (May 16, 2019) – WBC Heavyweight World Champion Deontay “The Bronze Bomber” Wilder and mandatory challenger Dominic “Trouble” Breazeale continued their war of words and further escalated their longstanding feud at the final press conference Thursday ahead of their showdown this Saturday live on SHOWTIME from Barclays Center, the home of BROOKLYN BOXING™, and presented by Premier Boxing Champions.
Also featured at the final press conference were WBC Featherweight World Champion Gary Russell Jr. and former world champion Kiko Martinez, who meet in a 12-round bout for Russell’s world title, and unbeaten Juan Heraldez and former world champion Argenis Mendez, who compete in a 10-round super lightweight fight. Those two bouts will be part of SHOWTIME CHAMPIONSHIP BOXING coverage beginning at 9 p.m. ET/6 p.m. PT on SHOWTIME, while three undercard fights will stream live on SHOWTIME Sports social platforms beginning at 6:30 p.m. ET/3:30 p.m. PT on SHOWTIME CHAMPIONSHIP BOXING COUNTDOWN.
Tickets for this BombZquad event can be purchased at ticketmaster.comand barclayscenter.com. Tickets also can be purchased at the American Express Box Office at Barclays Center. Group discounts are available by calling 844-BKLYN-GP. The Heraldez vs. Mendez fight is co-promoted with Mayweather Promotions.
Here is what the press conference participants had to say Thursday from Barclays Center:
DEONTAY WILDER
“These fighters always get into great shape and think they have the game plan to beat me. They think they’re going to catch me. It’s not going to work. Nothing this guy has prepared for is going to work. 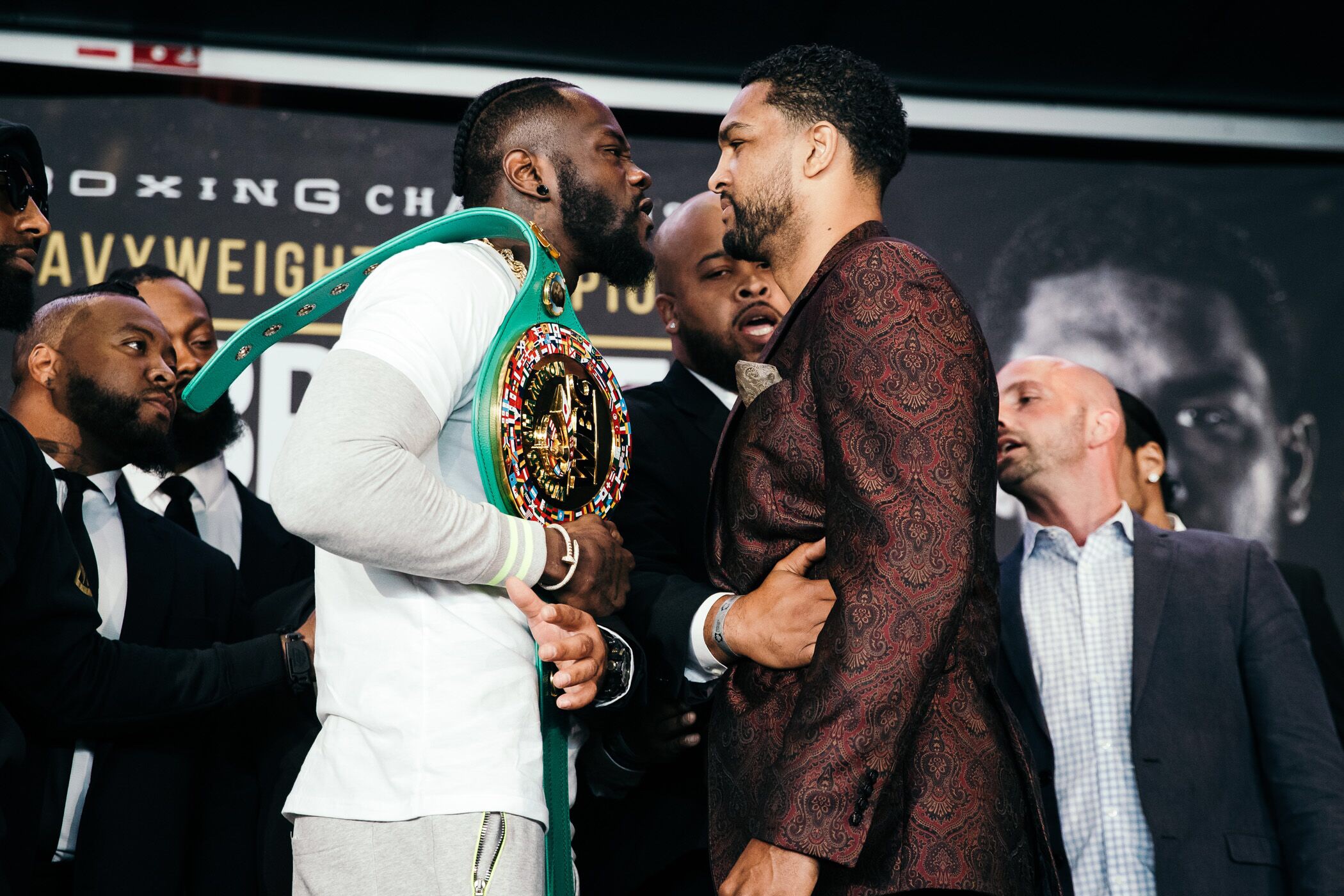 PHOTOS BY: AMANDA WESTSCOTT FOR SHOWTIME
“I hope he brings the best he can bring. This is more than just a boxing match. I’m passionate about what I do. This has been a long time coming for me and Dominic. He asked for this, and he shall receive.
“It’s going to be an amazing night for me, and a sad night for him. Being heavyweight champion is a big responsibility. Not everyone is made to be a champion. It’s more than being glamorous or carrying around this prestigious belt.
“I’ve trained harder than I’ve ever trained. He’s got me inspired like I was against Bermane Stiverne. I want to hurt Breazeale so bad. I’m going to keep my composure until that time comes Saturday night.
“I don’t believe Breazeale when he speaks. I’ve been in this game for a very long time. Someone like him is not going to beat me. The closest he’s going to get to this belt is in his dreams.
“My whole team has been with me since day one. We started together and we’re going to go all the way together. It’s been an amazing run for me. I started my career at the very bottom and worked all the way to this point.
“We never rushed anything. Even in the Olympics, I was still learning on the job. We trained to be a long term champion, not a short term champion, and we accomplished that. I’m appreciative for how far I’ve come and for everything that’s come with it. Hard work pays off.
“My actions are going to speak louder than my words. I am the best. I am the chosen one. He can say what he wants. It’s going to be a great fight for as long as it lasts. I’m going to bring the pain. Saturday night, everyone is in for a treat.”
DOMINIC BREAZEALE
“I’m super excited for this fight. Virgil Hunter and myself had a great camp. It was truly one of the best of my life. I’m mentally focused and physically right. 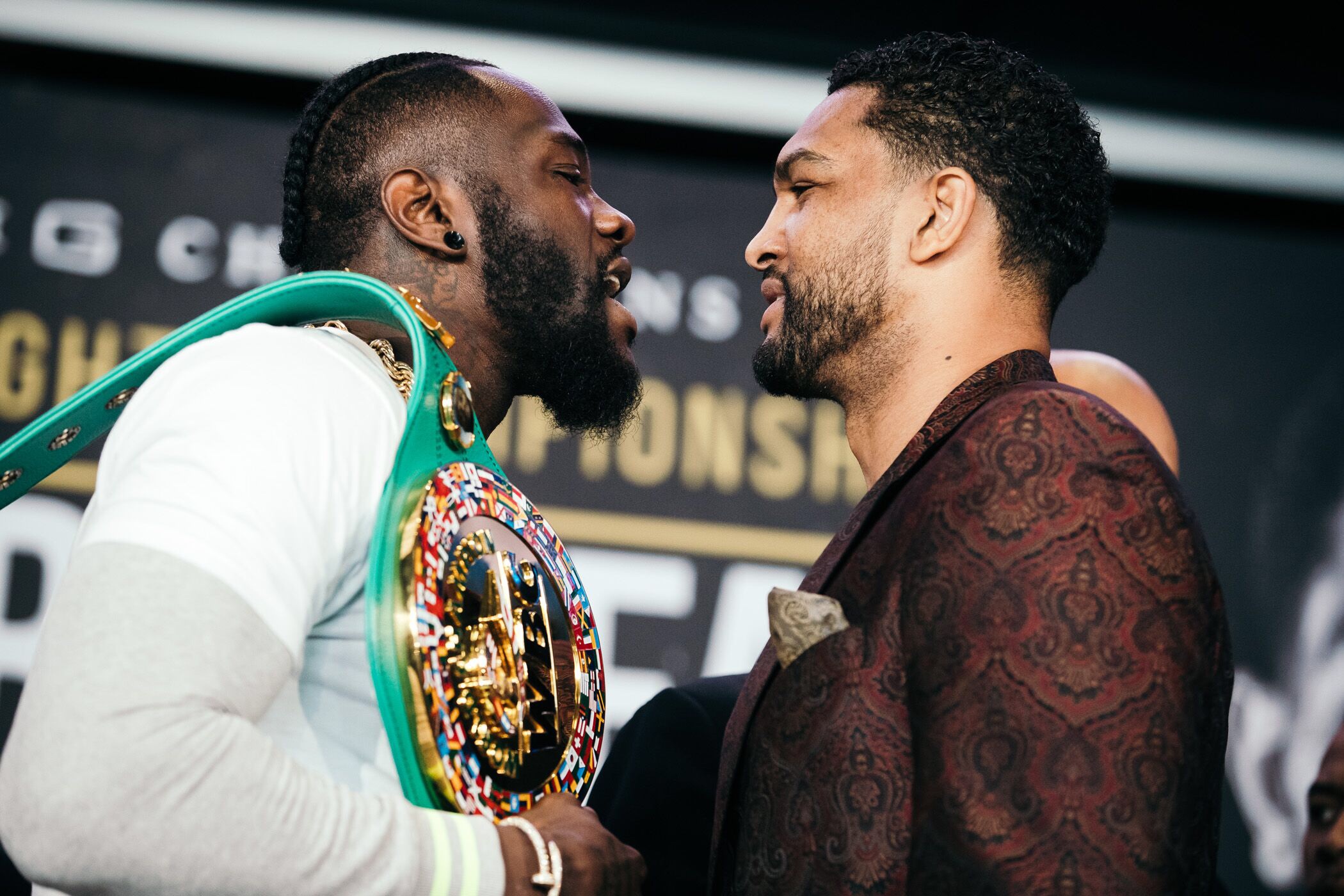 “I’m excited to be back and get another knockout win. Getting that WBC belt is everything to me. This is my Super Bowl.
“Victory for me on Saturday is everything. Wilder doesn’t know what he’s getting himself into. He’s in for a fight. He better be confident in his abilities, because Saturday night, he’s going to be in the toughest fight of his life.
“I’m going to beat Deontay so bad that he’s not going to ever want to lace up the gloves again. Sports are 80% mental. When I’m done with him, the mental aspect is going to be beat out of him.
“I’m going to put on another explosive performance. I’ve been dreaming for the last year about hearing ‘and the new.’ It’s a beautiful thing and I can’t wait to make it come true and have my hand raised.
“Wilder hasn’t developed at all during his career. He looks the same as he did in the amateurs. He needs to talk himself up to make himself feel confident.
“I’m too mentally in-tune to be focused on what someone says. When I go into a fight I don’t worry about what my opponent can do, but about what I want to do and how I can execute.
“None of Deontay’s words affect me at all. He’s going to keep barking and I’m just going to keep waiting. I’m going to quiet him down on Saturday night.”
GARY RUSSELL JR.
“I’m hungry and ready. Anyone that I step in the ring with is standing in the way of my goals. Anyone trying to stop me, is in a dangerous position. 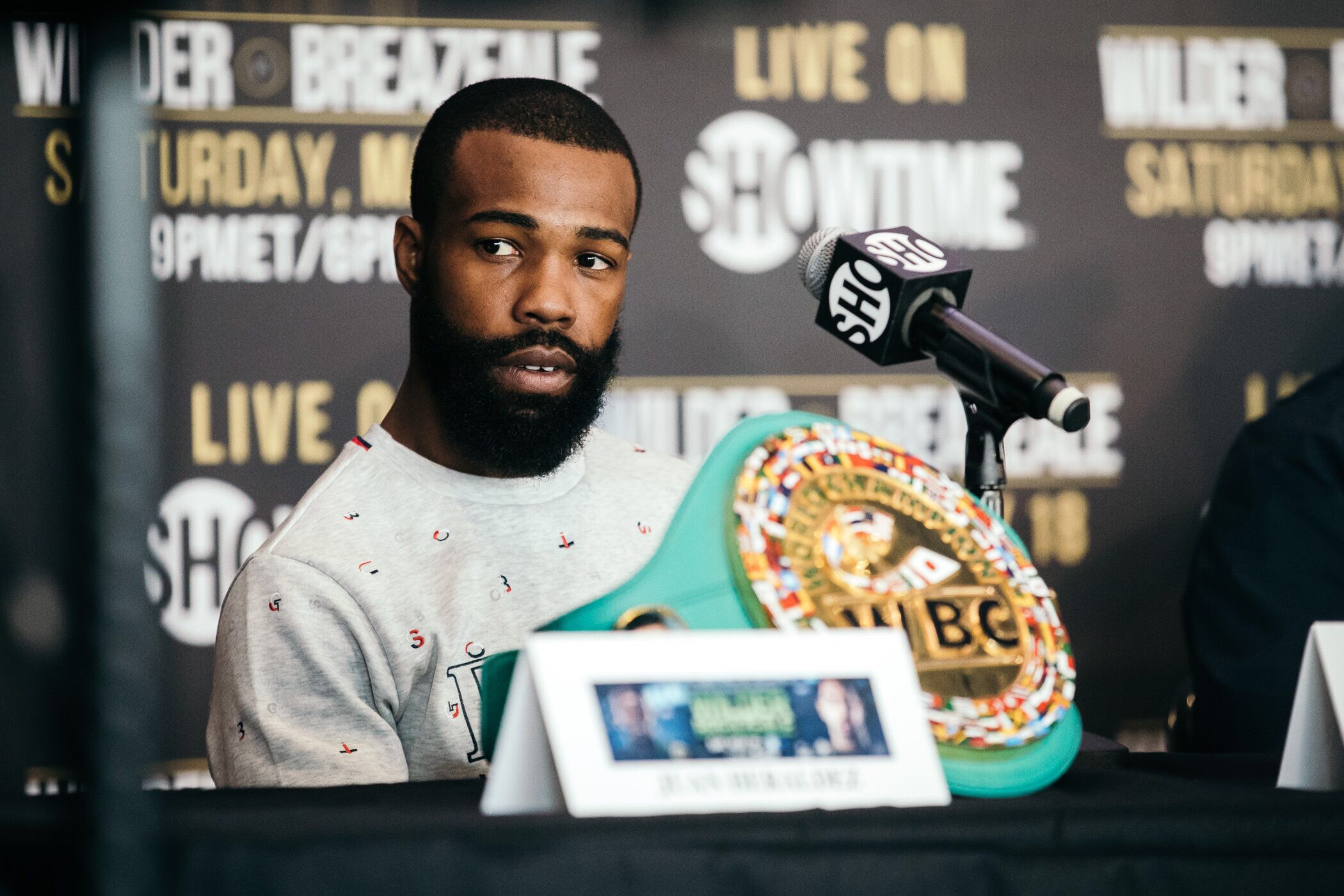 “We’re going to try to control the pace of the fight with my jab. I don’t think he’s going to get past the jab. He’s going to try to get rough and physical. My plan is to make the adjustments that I need to get this win.
“It’s always a family affair with the Russells. We move as a unit and we excel as a unit. My family is where I pull all my energy from. It’s never a distraction. They give me the fuel I need.
“In boxing you need to have full trust and belief in your coach. I couldn’t imagine a better fit than having my dad. Even if he gives instructions that might not be 100% right in my eyes, I know that it’s going to be the best thing for me.
“No one in this division wants to step in the ring with me. They know the speed and power and abilities that I bring every time I step into the ring.
“Deontay and I were on the same Olympic team, plus Dominic and my little brother Gary Antuanne Russell were also U.S. Olympians. It makes for an amazing card on Saturday night.”
KIKO MARTINEZ
“I come to fight and get that title. I had a very smooth training camp and feel 100 percent physically. 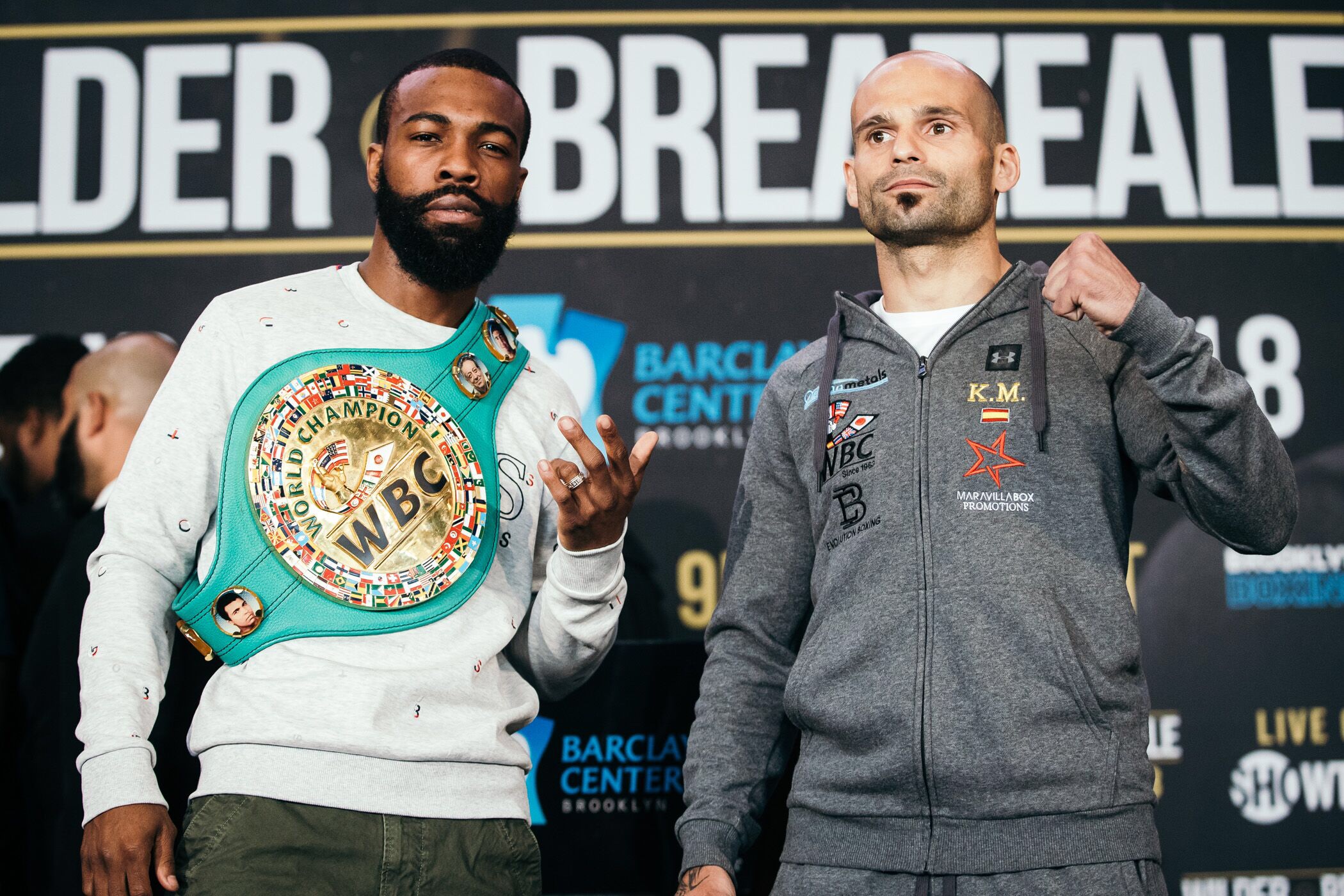 “I think my experience is superior. He thinks I’m only a pressure fighter, but he hasn’t seen me box the way I’m going to box him on Saturday.
“This is the biggest opportunity of my life. To be on this platform and be able to fight for the championship is very special. I’m going to make the most of it.
“I hope that Russell doesn’t take me lightly because I still have a lot of abilities left. It’s going to be a great fight for as long as it lasts.”
JUAN HERALDEZ
“Camp went great and I can’t wait to put on a show. I’m going to let everyone in this division know that I’m coming for them. I’m going to seize the moment and take full advantage of it. 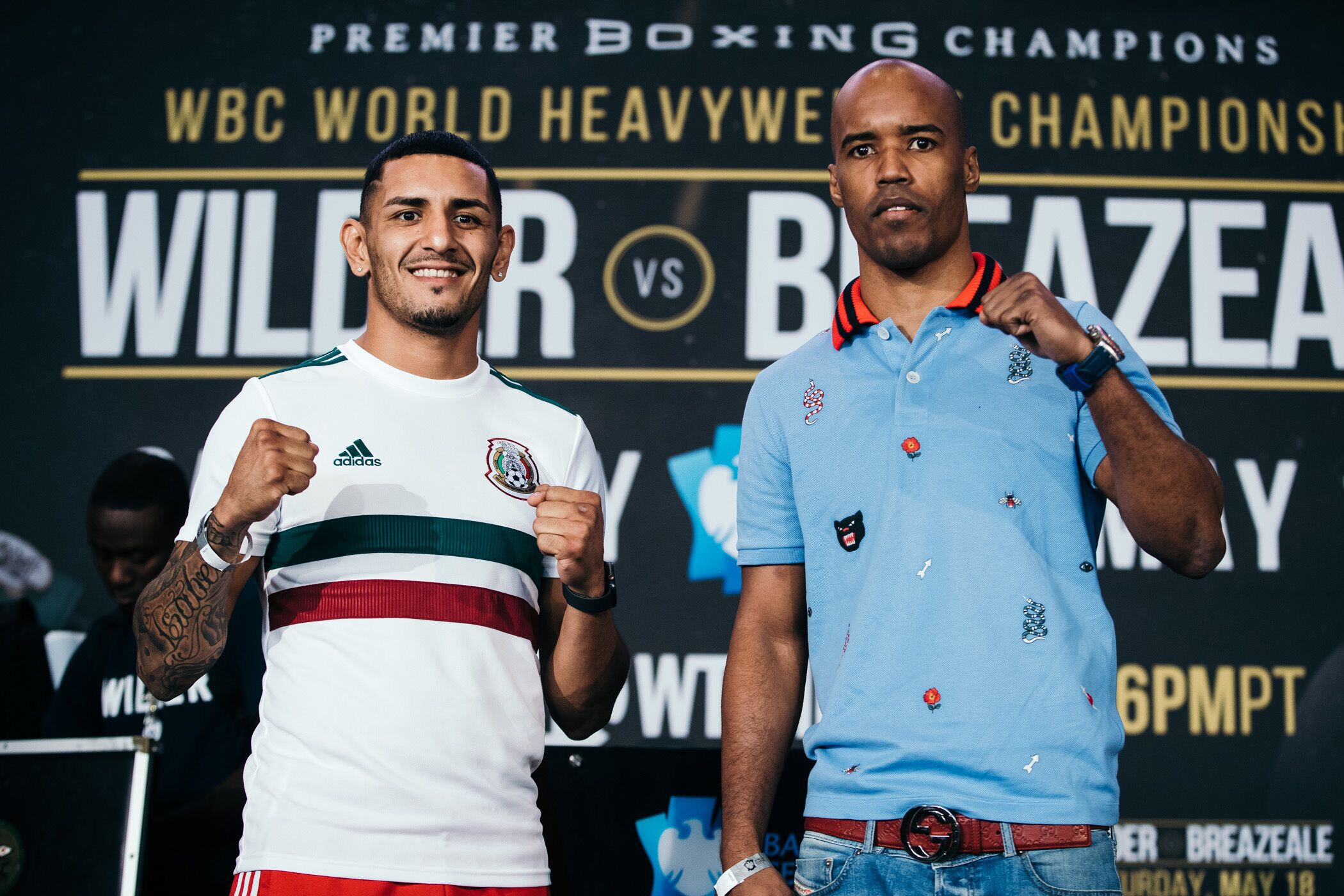 “I feel strong and I’m ready to fight. I’m just counting down the minutes until I can step into the ring. It’s a lot of excitement and I’m going to let it all out Saturday.
“I plan to win in spectacular fashion on Saturday. I’m going to show everyone that I’m a player at 140-pounds and I’m ready for anyone they can put in front of me.
“I’m not planning to get hit. I’m going to out box him and stick and move. He’s not going to be able to touch me. If the opportunity for a knockout comes, I’ll take it.”
ARGENIS MENDEZ
“I’m very excited for this opportunity. I had a great training camp and on Saturday night you’re going to see a show at Barclays Center.
“I love boxing and I love this opportunity that I have on Saturday night. I’m going to show my passion for the sport during this fight. I feel great physically and just cannot wait to get into the ring.
“A win on Saturday night opens the door for me. People are going to start seeing me as one of the best fighters from the Dominican Republic.
“It’s going to be a good fight. I have the speed and skills to out box him. We’re both very smart fighters. I believe I’m the better fighter and it will show on Saturday night.”
STEPHEN ESPINOZA, President Sports and Event Programming, Showtime Networks Inc.
“The heavyweight division is exciting again and a lot of that has to do with Deontay Wilder. It’s also been helped by SHOWTIME and our commitment to the division. No other network has been more committed or invested more in the heavyweights than SHOWTIME has and we’re proud of that. 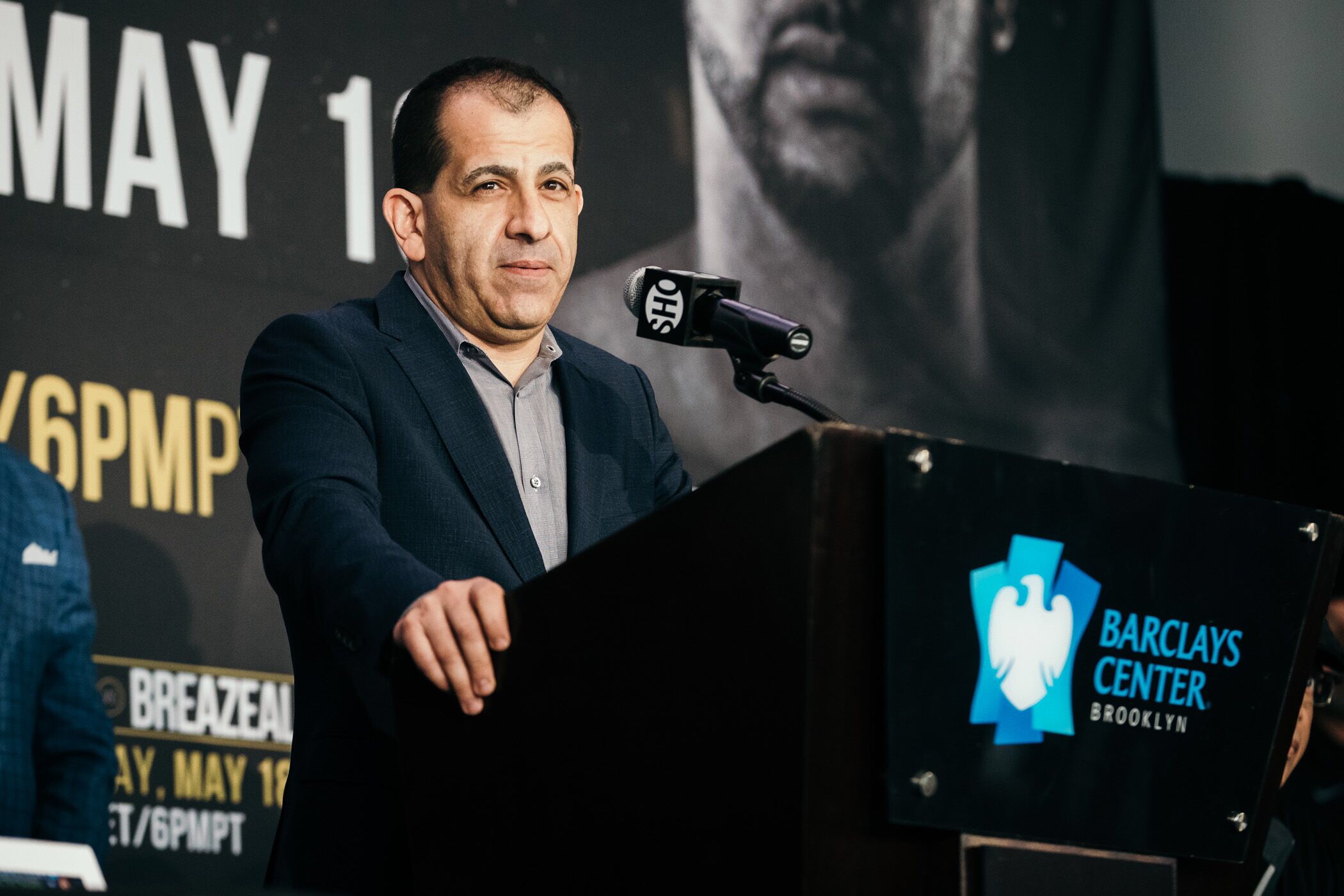 “We’re also proud that several of the fighters on this card have fought frequently on SHOWTIME. Deontay will make his 12th appearance and Gary will make his 11th. Wilder, Russell and Dominic all launched their careers on ShoBox, like so many other great fighters.
“When you get two guys together for a long-awaited grudge match, there’s not a lot that needs to be said. Deontay is the longest-reigning heavyweight champion in the sport. This would be the ninth defense for him, which is something that only nine other heavyweights have done in boxing history.
“Deonay had two of the most exciting heavyweight fights in recent history last year. As for Dominic, he’s a big strong experienced guy who’s been on the world stage before. He has fought for a world title and he’s coming off of three consecutive wins. He has plenty of power and we saw that in his last fight against Carlos Negron that he can change the fight in one punch.”
BRETT YORMARK, CEO of BSE Global
“The heavyweight division has been the talk of the sports world for months, and it’s fitting that the world champion will defend his title right here in Brooklyn in one of the biggest fights in the sport this year. 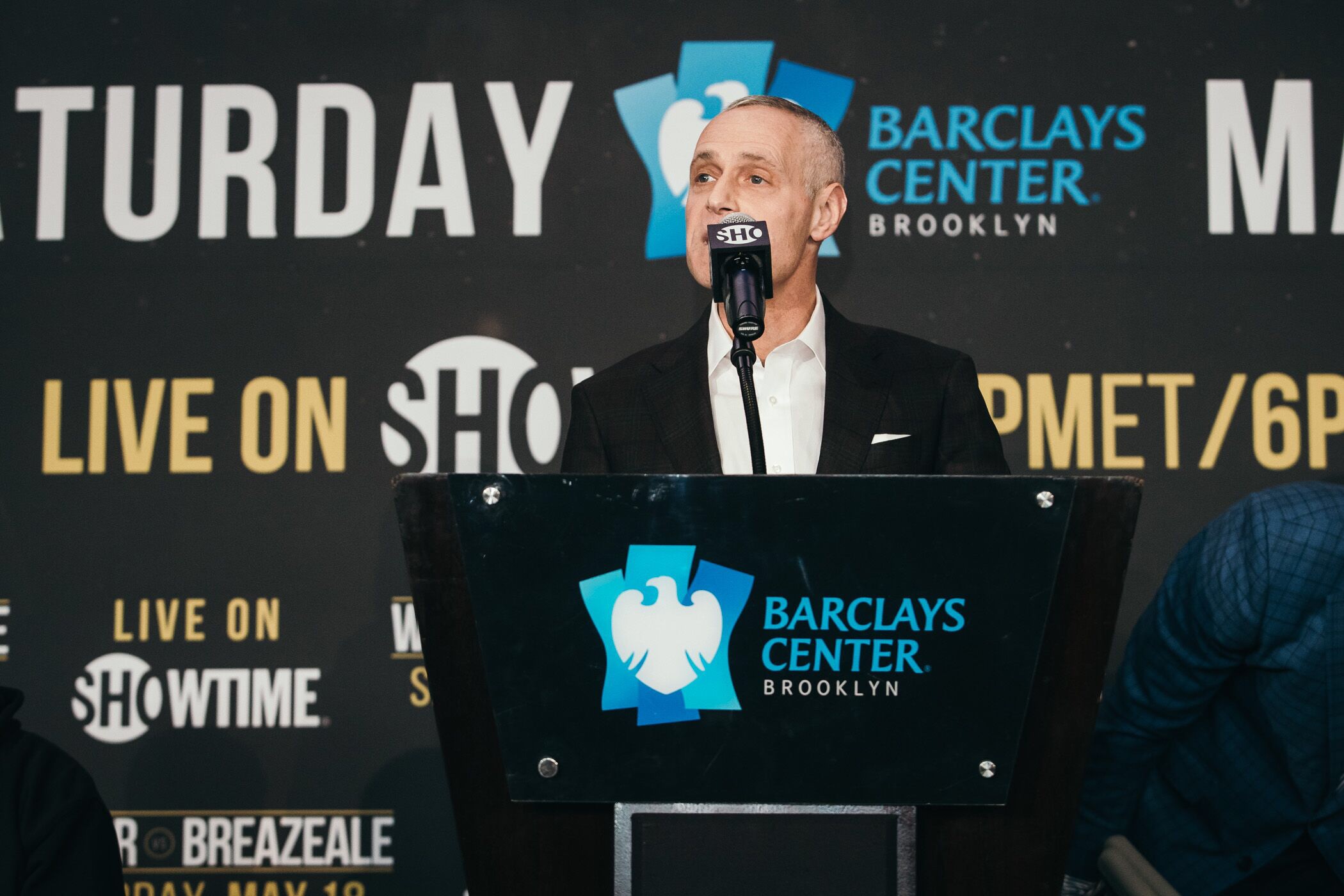 “Deontay, I’ve said for a long time that this is your home away from home and we can’t wait to have you back. You have a big opponent this week in Dominic Breazeale. Dominic you’ve already made two appearances in our ring and we know the fans are looking forward to another great show.”