(PRESS RELEASE) ATLANTIC CITY (April 14, 2019) – Claressa Shields is the undisputed middleweight champion of the world. The 24-year-old Flint, Mich. native delivered the best performance of her career and cruised to a unanimous decision over Germany’s Christina Hammer Saturday on SHOWTIME in arguably the most significant women’s boxing match in history. The judges scored the fight from Boardwalk Hall in Atlantic City 98-92 and 98-91 twice. 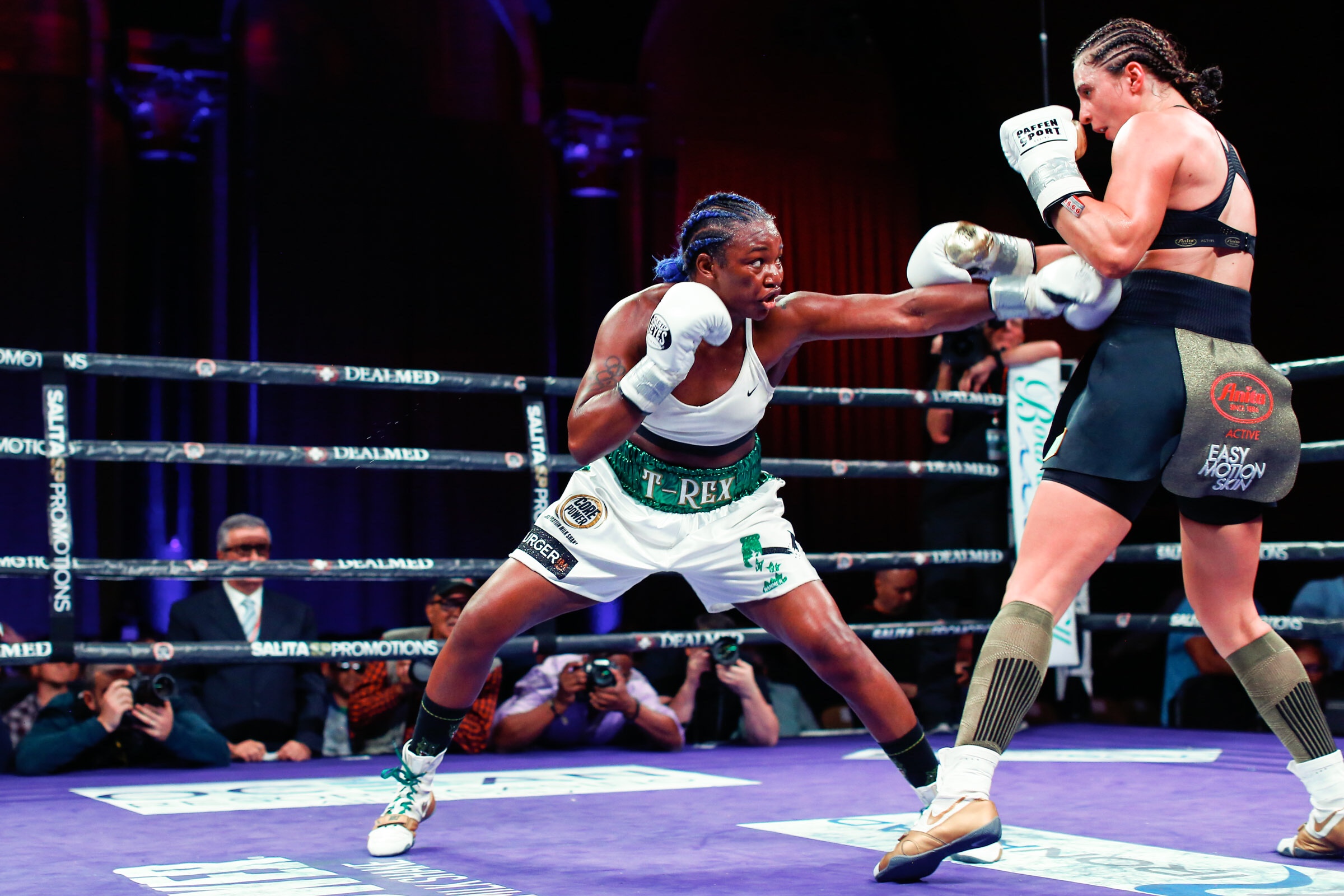 PHOTOS BY: STEPHANIE TRAPP FOR SHOWTIME

The two-time Olympic gold-medalist Shields (9-0, 2 KOs), who entered the fight holding the IBF, WBA and WBC 160-pound titles, showed off her complete arsenal of skills in the dominating performance and now joins Terrence Crawford, Jermain Taylor, Bernard Hopkins, Oleksandr Usyk and women’s welterweight champion Cecilia Braekhus as the only fighters to have unified all four major world titles in any weight class. 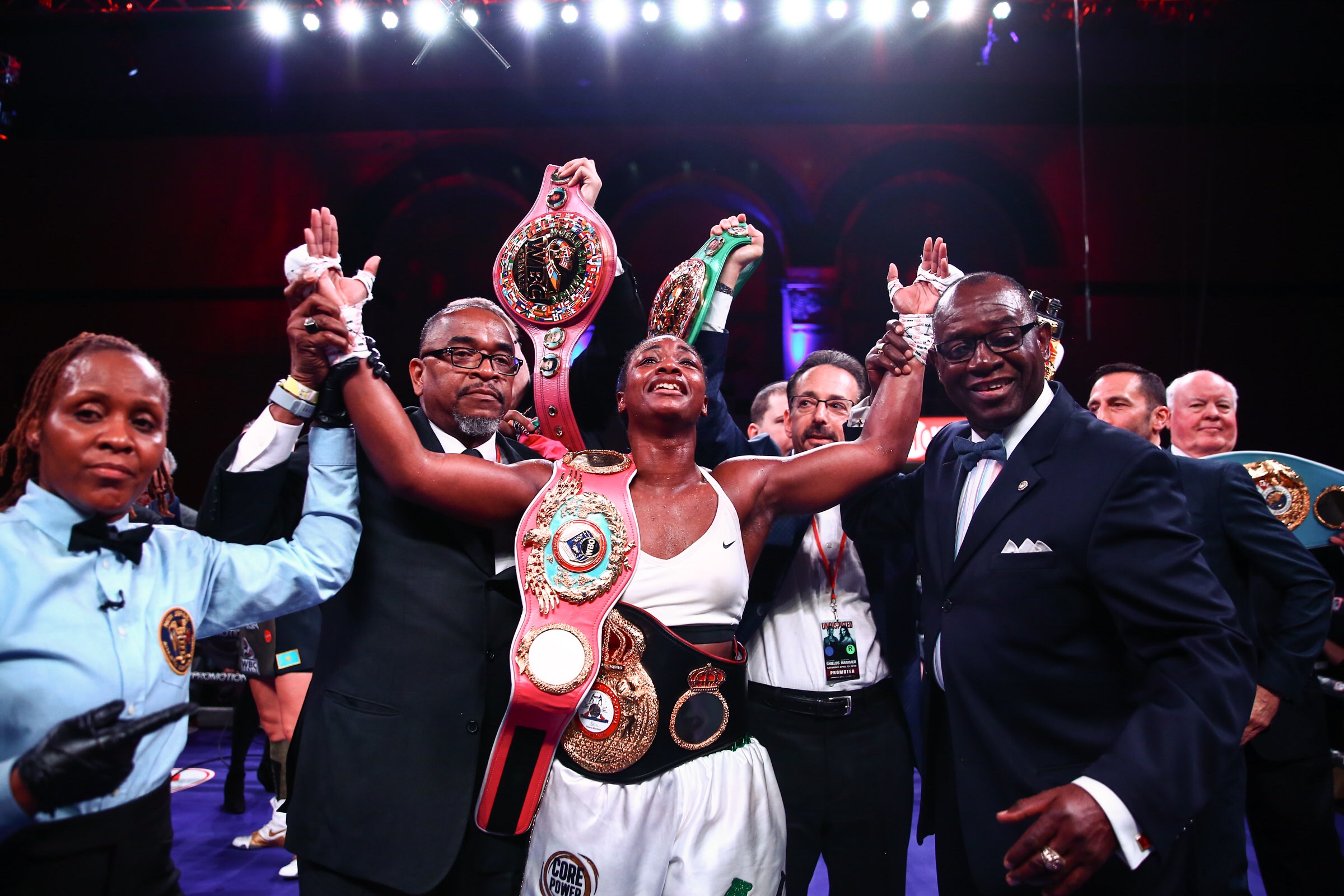 Christina Hammer (24-0, 11 KOs), who owned the WBO belt entering the fight, had her jab largely neutralized and her defense exploited from start to finish. Shields landed a remarkable 44% of her power punches and landed on 112 total punches compared to just 49 for Hammer. As impressive as her offense was, Shields’ defense and head movement was immaculate as Hammer was able to connect on just 13% of her total punches, 11% of her jabs and 18% of her power shots.

Speaking to SHOWTIME’s Hall of Fame analyst Steve Farhood following the historic night for women’s boxing, the outspoken and emotional Shields held nothing back.

“I am the greatest woman of all time,” said Shields, who nearly earned a stoppage during a barrage in the closing moments of the eighth round. “I did it. She didn’t win a single round.  I almost knocked her out. I swear I feel like I’m dreaming right now. Thanks to Christina Hammer and her team. They said she had a hard jab and they weren’t lying. Her jab is off the chain.

“I was just calculating in the first round and after that I started picking her apart,” she continued. “I knew I could hurt her. I thought I finished her in round eight. I thought the fight should have been stopped.  She was holding onto me.  I just told myself, stay cool, stay cool.  I was trying to get the perfect punch to get her out of there.”

Fresh off the biggest win of her professional career, the newly-crowned undisputed champion of the world already has her sights set on another opponent.

“Women’s boxing, we’re on fire.  I cannot wait to see the next super fight. Give me Cecilia Brækhus at 154 pounds. That’s who I want next. Either her or Savannah Marshall.”

“I didn’t fight very good or fast,” said a subdued Hammer. “That’s boxing, anything can happen. I wanted this fight. She won, respect to her. She’s a tough, strong woman and that’s all I can say.

“She’s fast, she comes forward. She has fast hands. I couldn’t land my jab as good as I expected. I’ll come back and I’ll be back stronger.”