ONTARIO, Calif. (December 21, 2019) – Jermell Charlo reclaimed the WBC Super Welterweight Championship from Tony Harrison with a blistering stoppage at 2:08 of the 11th round in a FOX PBC Fight Night main event and on FOX Deportes from Toyota Arena in Ontario, Calif.
Charlo (33-1, 17 KOs) lost the title to Harrison (28-3, 21 KOs) by unanimous decision last December. In the buildup to the rematch, there was much animosity between the two boxers. The heated atmosphere surrounding the fight made for a much-anticipated grudge match. 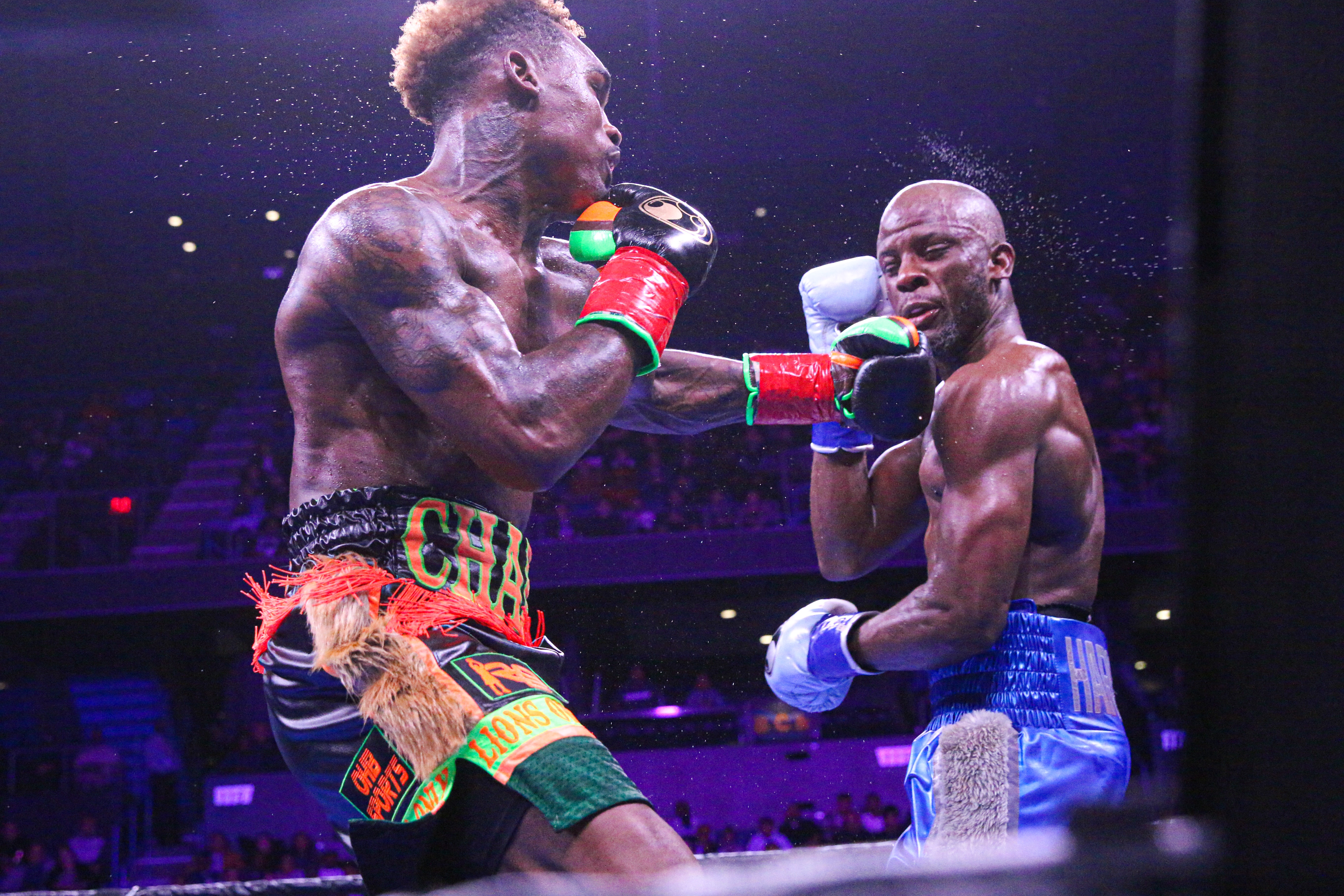 PHOTOS BY: LEO WILSON FOR PREMIER BOXING CHAMPIONS
“I got the belt back and I didn’t leave it up to the judges,” Charlo said. “Tony is a former champion. He had a lot on the line. I dominated and I knocked him out.”
Charlo dropped Harrison for the first time in the second frame. He said it was a signal to let Harrison know that his power was real.
“It let him know that the power was real and 2020 is going to be real,” Charlo said. “It’s going to get loud.”
Harrison didn’t argue with the stoppage. 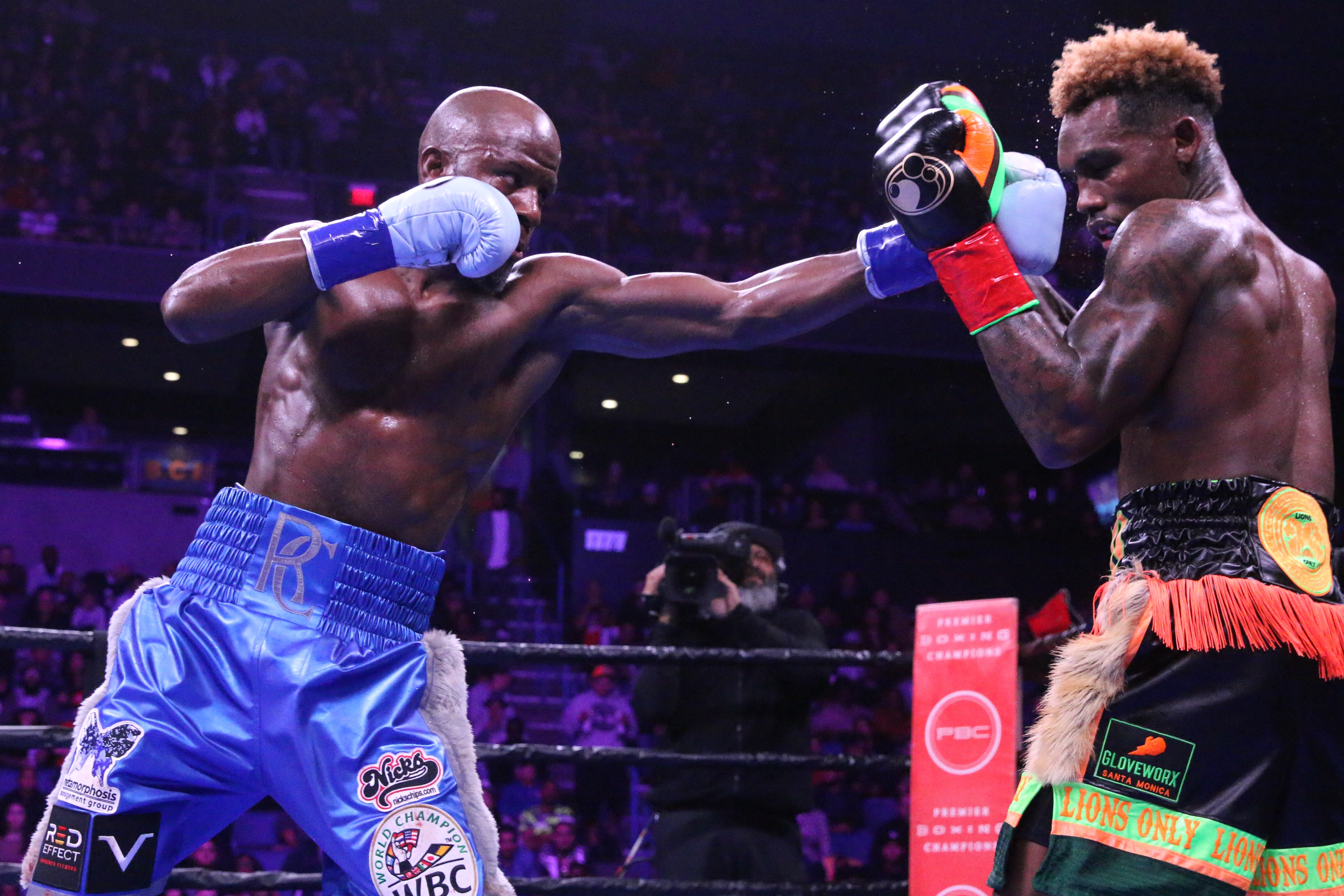 “Jack is a championship referee. I started getting a little lax and got caught,” Harrison said. “He earned it. I hate it, but he earned it. The game plan was to do a little boxing. But taking a year off, my boxing wasn’t used to it. He earned it and no excuses. I got caught slipping. I never trade offense for defense. He caught me in between. I feel like I let us down. I let me down. It’s one on one. Back to the drawing board.”
In the 11th round, Charlo caught Harrison with a devastating right hand that dropped Harrison for the second time in the fight. Harrison managed to get up from that knockdown and Charlo charged ahead again, opening up with a barrage of punches, dropping him onto the second rope again.
Charlo thought the fight was over and jumped up on the ropes in Harrison’s corner as referee Jack Reiss hovered over the prone Harrison. But Harrison managed to get back to his feet and Reiss allowed the fight to continue. Harrison was hurt and Charlo opened up on him again, forcing Reiss to step in and finally call a halt to the match.
Harrison and Charlo spent the first half of the bout fighting in close quarters, firing uppercuts and short hooks to the body. Both men appeared to enjoy the close proximity. Charlo dropped Harrison with a sharp left-right combination in the second stanza, which seemed to embolden him to keep head hunting. Harrison managed to keep his head about him and settled into an easy rhythm as he tried to walk Charlo down.
Charlo picked up his pace in the later rounds and tried to force Harrison to fight at a faster tempo, but he couldn’t force Harrison into the type of firefight that would work to his advantage. Harrison maintained his easy pace, working behind a consistent jab and landing clean punches.
Just like the first match, Harrison was hoping that his steady pace behind the jab would carry the night. It did until it didn’t, and then Charlo brought matters to a conclusion.
Charlo said the animosity that built up before the rematch is real.
“Listen, I’m a gentleman at the end of the day. I showed my respect, but at the end of the day I don’t like the dude. He can get it again, but I’m off to bigger and better things. I’m down for making history. He held the title too long and I had to come back and get it.”
Click HERE to watch highlights of Harrison vs. Charlo.
The co-main event featured heavyweight sensation Efe Ajagba (12-0, 10 KOs) and Georgia’s Iago Kiladze (26-5-1, 18 KOs) slugging it out and trading knockdowns before Ajagba dropped Kiladze in the fifth round, prompting the ring doctor to call a halt to the bout. The end came at 2:09 with Ajagba scoring a TKO victory to maintain his unbeaten record.
It was an action-packed slugfest from the opening bell as the two giant heavyweights traded heavy shots. Late in the second round, Ajagba dropped Kiladze with a straight right down the middle. Kiladze was dazed but made it to his feet and finished the round. In the third round, Ajagba landed another heavy shot that buckled Kiladze’s knees and sent him stumbling around the ring on rubbery legs. Kiladze never went down. Though he was hurt, he was still dangerous as he proved when he dropped Ajagba with a thunderous right hand.
In the fifth round, Ajagba dropped Kiladze again, but he got up on unsteady legs. Ajagba was unloading unanswered shots on Kiladze when the ring doctor climbed on the apron waving a white towel, signaling that the fight was over. 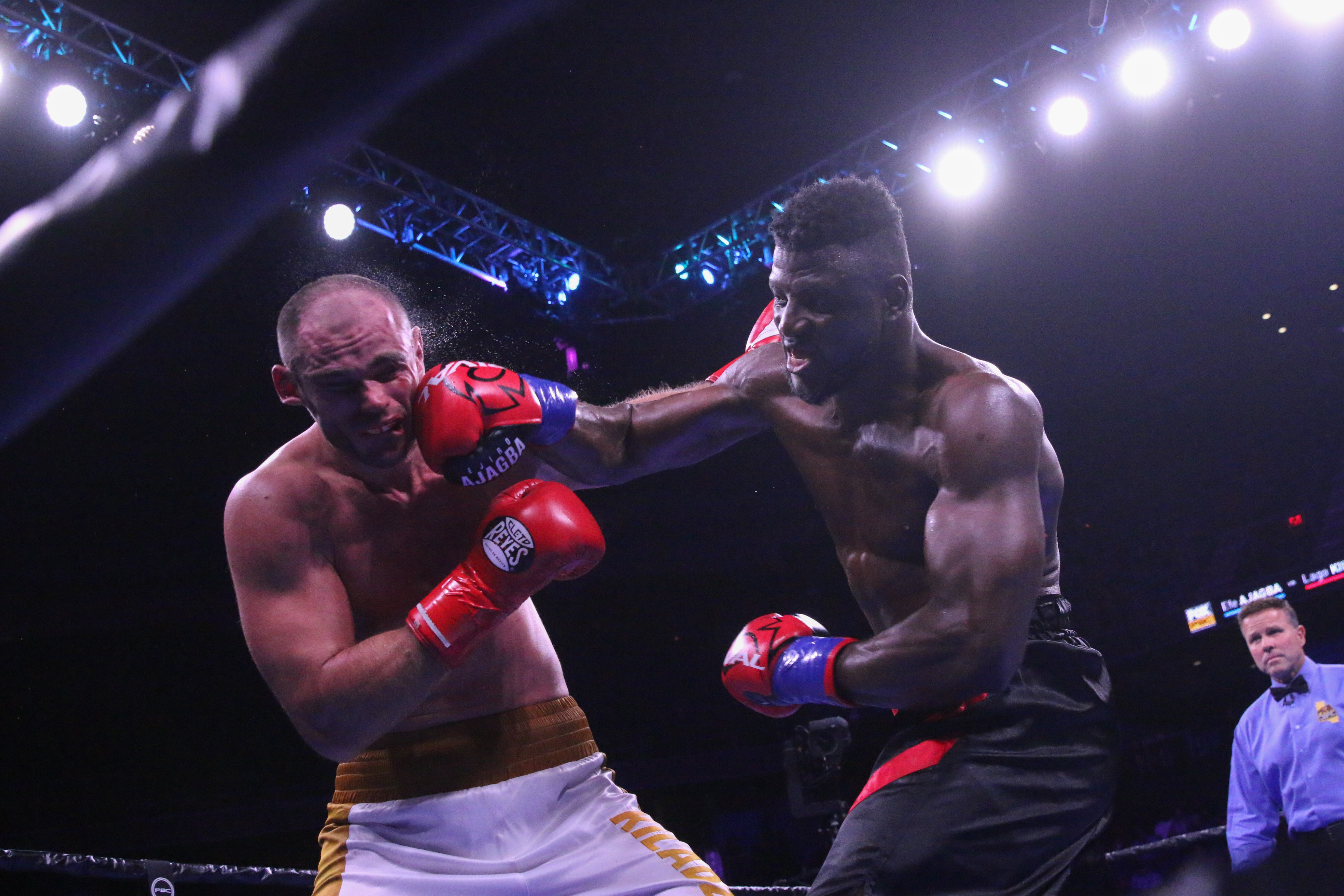 “When I got knocked down, I didn’t see the punch coming. I tried to hit him with the left hook and that’s when I got caught,” Ajagba said. “He has a lot of experience and he’s a good fighter. This kind of fight will help me perform better in the future. This guy was a good fighter and he can take a lot of shots. I missed a lot of shots. Ronnie Shields, my trainer, kept telling me to work behind the jab and come back with the hook. It’s something that I have to learn to do. I made some mistakes, but I will go back to the gym and work on it. I’ll do better next time.”
Click HERE to watch highlights of Ajagba vs. Kiladze.
In the FOX opener, Mexico’s Rene Tellez Giron (14-1, 8 KOs) scored a sixth-round knockout against 2016 U.S. Olympian Karlos Balderas (9-1, 8 KOs) to hand Balderas the first loss of his professional career. The fight was scheduled for eight rounds, but Giron brought matters to a close at 2:59 of the sixth round when he landed a smashing left hook and caught Balderas on the chin and sent him falling flat on his back to the canvas. Balderas made it to his knees, but couldn’t beat the count of referee Ray Corona.
Giron dropped Balderas with a left hook in the third round, but Balderas managed to beat the count and Corona let the fight continue despite the fact that Balderas stumbled backwards when Corona asked him to walk forward. 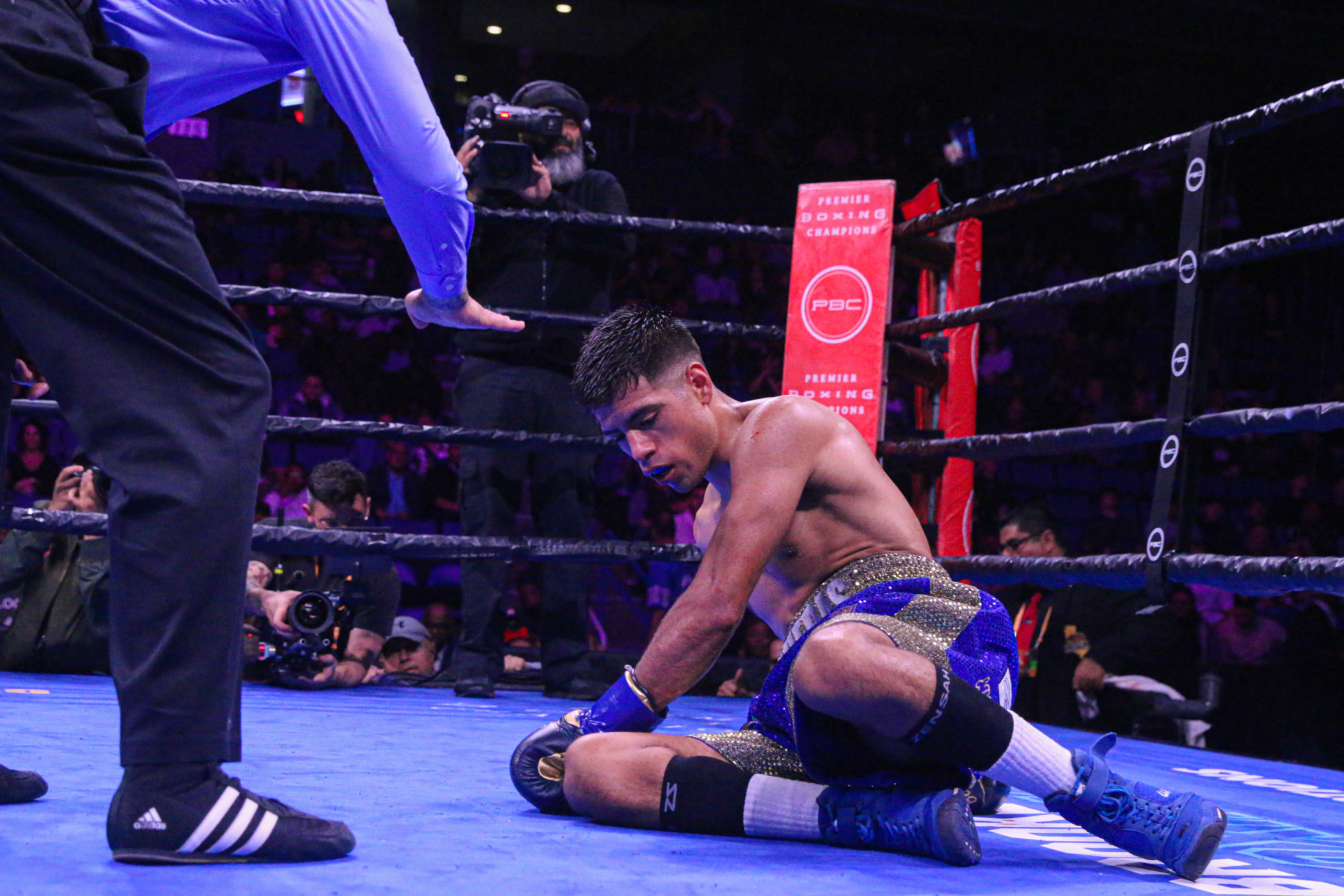 “After I knocked him down in the third round, I saw his eyes were rolled back like he was hurt, but he has the heart of a lion,” Giron said. “He didn’t want to lose his undefeated record in front of his people. When he got up, I was like, ‘Wow! He got up! He’s up!’ So, I kept on him and left everything in the ring. I’m really happy. Karlos had said he fought with the best and he was an Olympian. Well, I fought a lot of people too and you see the result.”
Click HERE to watch highlights of Balderas vs. Giron.
In FS1 action, rugged former title challenger Oscar Escandon (26-5, 18 KOs) stunned undefeated Filipino featherweight contender Jhack Tepora (23-1, 17 KOs) with a crushing first-round knockout in a scheduled 10-round bout. Escandon landed a perfectly placed left hook to Tepora’s body, sending him to the canvas on his hands and knees. That is where he remained as referee Jack Reiss counted him out and gave Escandon the victory. The end came at 1:30 of the first round.
“This fight was very important to me because I know I needed to win if I wanted to continue forward with my career,” Escandon said. “I know I have a lot of fight left in me. I just want to thank my team. Ruben Guerrero, my trainer, was on me about listening to him in the corner and all his instructions worked perfect. I want to thank the PBC and Bob Santos for always believing in me. I give all the glory to God for this victory.”
Hugo Centeno, Jr. (27-3-1, 14 KOs) and Juan Macias Montiel (21-4-1, 21 KOs) fought to a majority draw (97-93 Centeno, 96-94 Montiel, 95-95) in a 10-round middleweight fight. Centeno and Montiel traded heavy shots throughout the match, but neither was able to land anything telling. There were no knockdowns in the fight as Centeno tried to control the fight from range and potshot.
“I don’t agree with the decision at all. I thought I out-boxed the guy. He landed a couple shots, but I don’t think it was enough to get a draw or win on any of the cards,” Centeno said. “To be fair, I’d give him like three rounds. I know I didn’t win all the rounds, but I know I won enough to win the fight. If I can, I’m going to appeal the decision because I thought it was (the wrong) decision. This is the thing that drives away fighters from boxing is scores like this.”
“I took the fight to him and he was just boxing. I’d like a rematch and I’d like him to fight and not run,” Montiel said. “I was inactive for a year and I gave him three pounds and he still didn’t bring it. In reality I brought it to him. Next time, I want him to stand and fight.”
The FS1 opener saw undefeated super welterweight prospect Raymond Guajardo (5-0, 4 KOs) score a devastating first-round knockout of Donnis Reed (3-5, 2 KOs) in a scheduled four-rounder. Guarjardo landed a six-punch combination, punctuated with a powerful right-left combo that dropped Reed to the canvas. The referee waved off the fight, giving Guajardo the KO victory at 1:40 of the first round.
“I’m always looking to get my opponents out, so that was the first thing I wanted to do,” Guajardo said. “I think I had landed a hook before that and I saw I had hurt him, so that’s when I went in for the kill. Everything happened naturally after that.”
The event was promoted by Lions Only Promotions and TGB Promotions.