LOS ANGELES (September 25, 2019) – IBF Welterweight World Champion Errol “The Truth” Spence Jr. and WBC Welterweight Champion “Showtime” Shawn Porter had an intense faceoff at Wednesday’s final press conference before they headline a FOX Sports PBC Pay-Per-View this Saturday, September 28 at STAPLES Center in Los Angeles.
The press conference also featured WBC Super Middleweight World Champion Anthony “The Dog” Dirrell and former world champion David “El Bandera Roja” Benavidez exchanging words before they clash in the co-main event of pay-per-view action that begins at 9 p.m. ET/6 p.m. PT.
Tickets for the event, which is promoted by Man Down Promotions, TGB Promotions and Shawn Porter Promotions, are on sale now and can be purchased at AXS.com.
Here is what the fighters had to say Wednesday from the Wilshire Grand Ballroom II at the Intercontinental Hotel:
ERROL SPENCE JR.
“I feel like all of my fights prepared me for this moment. Porter is not like Mikey Garcia. They have different styles and different mentalities. But there are a lot of distractions fighting at home and I feel like I overcame that to lead me to this point. 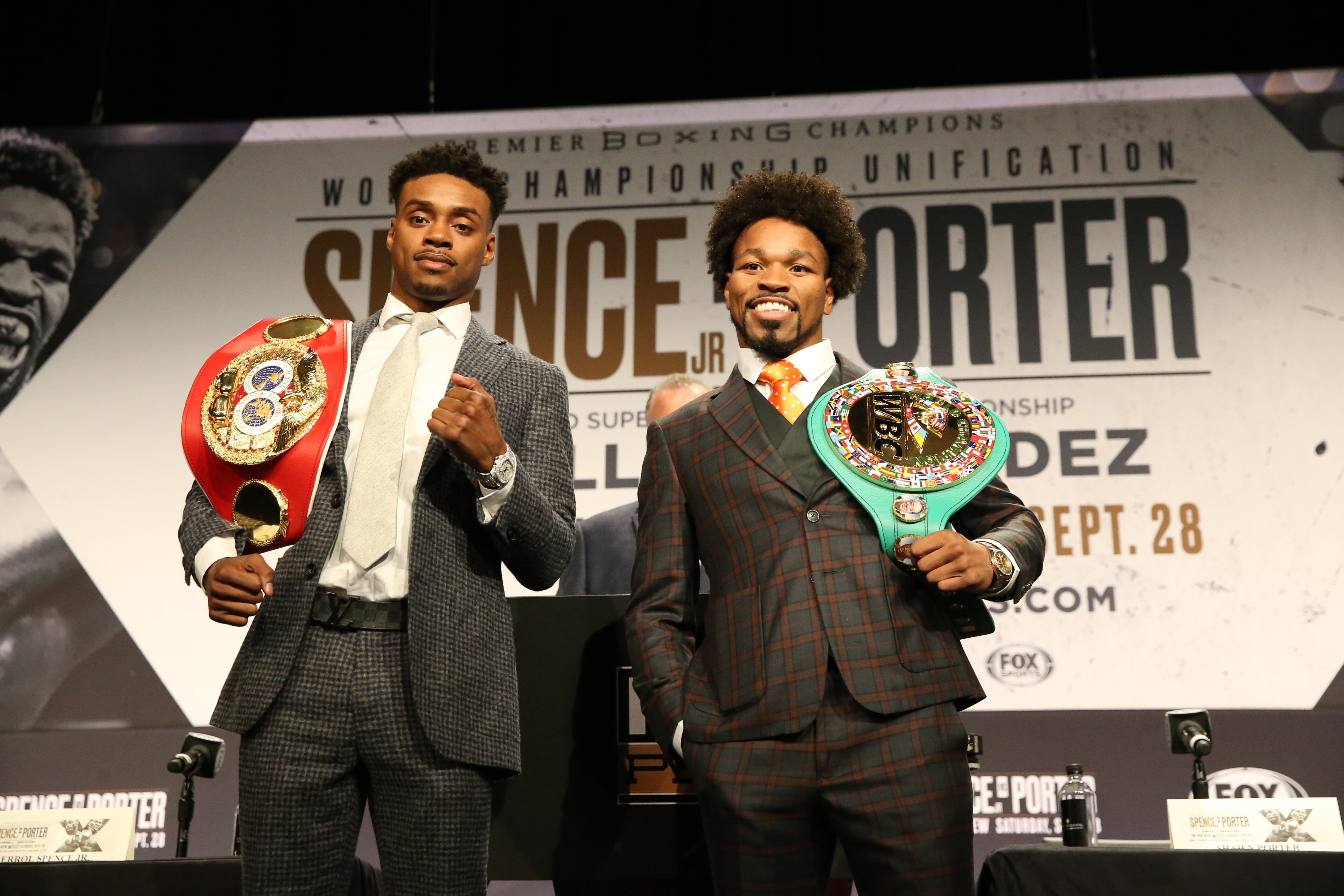 PHOTOS BY: LEO WILSON FOR PREMIER BOXING CHAMPIONS
“I don’t make anything of the words he’s saying. We train hard and we’re focused and prepared for anything he brings Saturday night.
He’s been talking a lot, his dad’s been talking a lot and I’m going to shut him up. They’re going to call me the “show stopper’ after Saturday night.
“I’ve prepared for everything. It’s all about adjustments. I make them fast in the ring. People thought Kell Brook’s experience would help him but it didn’t at all. I can adjust to my opponent’s style and we will show it Saturday.
“I’m ready to go. I never missed weight and I’m always professional. It’s just hard work and dedication. I’m going to be even more ripped and ready than I was against Mikey Garcia.
“This is going to be an amazing event come Saturday night. I will be the unified champion of the world. Shawn comes to fight and I embrace that. I can’t wait because I promise this is going to be one for the history books.
“I just have to do what I’ve been doing. I don’t care about the rounds as long as it doesn’t go 12.
I’m going to win and do it in dominating fashion.
“It’s important to me to get the knockout. It’s a goal of mine to stop him and I hope to get it done. If can’t get it done, then I’m just going to be comfortable with the victory. But you know I’m looking for the stoppage.”
SHAWN PORTER
“It’s the competitor in me to get at him any way I can. Until that bell rings, we’ll do whatever we need to do to let him know we’re really here to fight him. 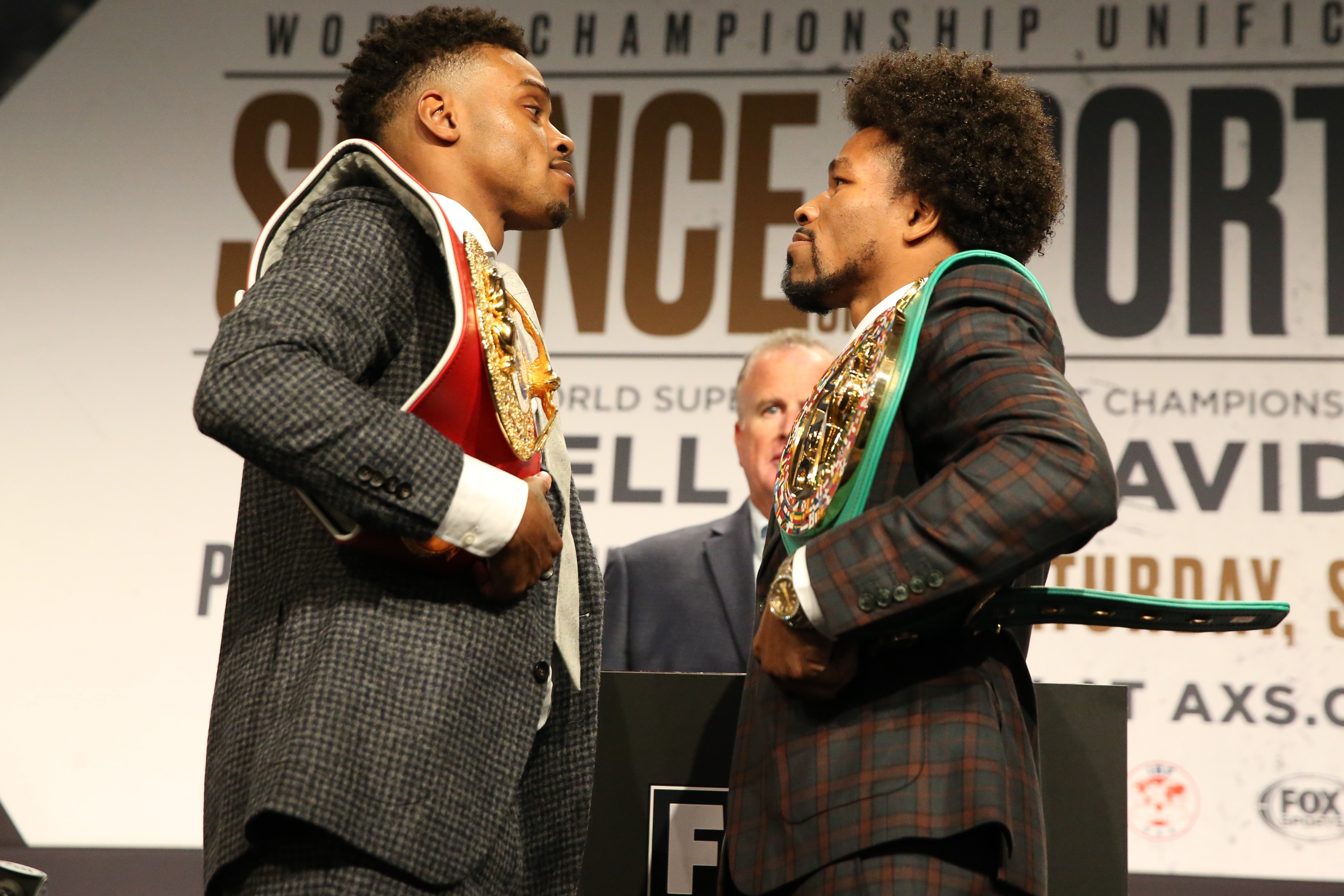 “When you’re in there with a top level opponent, it’s supposed to be a close action packed fight. I have everything it takes to make each fight exciting when I step into the ring.
“Everyone has seen everything what I’ve done in my career. Everyone knows I can take a punch and I’ll be there from the first round to the last round. We’ll see what happens to Errol as the fight goes on.
“This is the best camp I’ve ever had. The nutrition and everything has been spot on. I’m ahead of schedule and that’s where I plan to stay. I expect to be eating Friday morning.
“I’m aggressive and I’m strong and guys can’t handle it. There are things that happen in the ring and you just have to move with it. I’m always ready to do whatever it takes to get the job done.
“I expected it to get heated today. I know that if I fire at Errol, he’s going to fire back. That’s how the fights going to be as well. Everyone got a good taste of what you’ll see Saturday.
“Being in the underdog position is literally where I come from. Northeast Ohio is always an underdog. Everybody works where I come from. We always do the best we can.
“The resume is for everyone else to compare and contrast. For me, it’s all about who’s in front of me. I believe I have the right recipe to be the person to get the job done Saturday. I have the style to challenge him physically and mentally.
“We didn’t change too much of our program heading into this fight. For the second time we went down to Washington, D.C. for part of our camp.”
ANTHONY DIRRELL
“The underdog or the favorite I’m always going to ”The Dog’ no matter what. People can have their opinion on the odds, but it doesn’t play into my mentality at all for this fight. 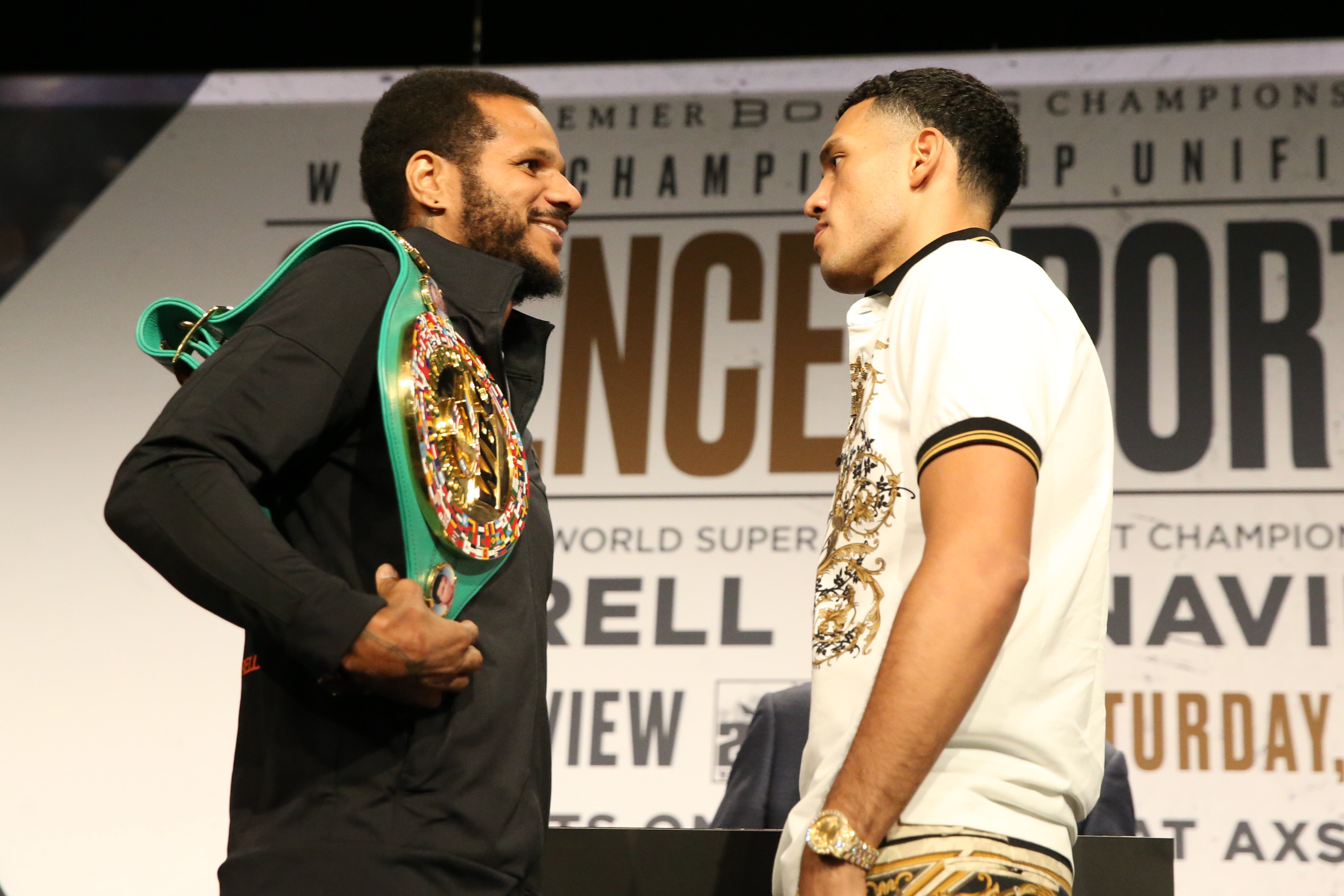 “This is a fight that could very well steal the show on this pay-per-view. It’s an honor to be in this position. It’s a dream to be on a card like this defending my title.
“I have to see how it plays out, but age is just a number. You see Manny Pacquiao and fighters like that who went out and beat younger opponents. You have to be determined and still focused on the game.
“Experience is definitely a big key in this fight. I think that he has holes in his game and I’m going to expose it on Saturday night.
“The cut from my last fight won’t be an issue for this one. That fight was over six months ago, so if it’s going to heal, it should be healed. It doesn’t affect anything I’m doing in the ring.
“My training camp in Las Vegas was spectacular. It’s all about taking yourself out of your comfort zone and push yourself to the max to be successful at this elite level.
“I don’t think this fight is going the distance and I know I’m having my hand raised at the end. He got dropped with a jab and I hit harder than Ronald Gavril.”
DAVID BENAVIDEZ
“I’m very motivated for this fight. I feel like I have another opportunity to not just get a title, but take it from a champion. I’ve worked very hard for this fight. Dirrell has never been knocked out and I’m taking the challenge to be the man who does it. 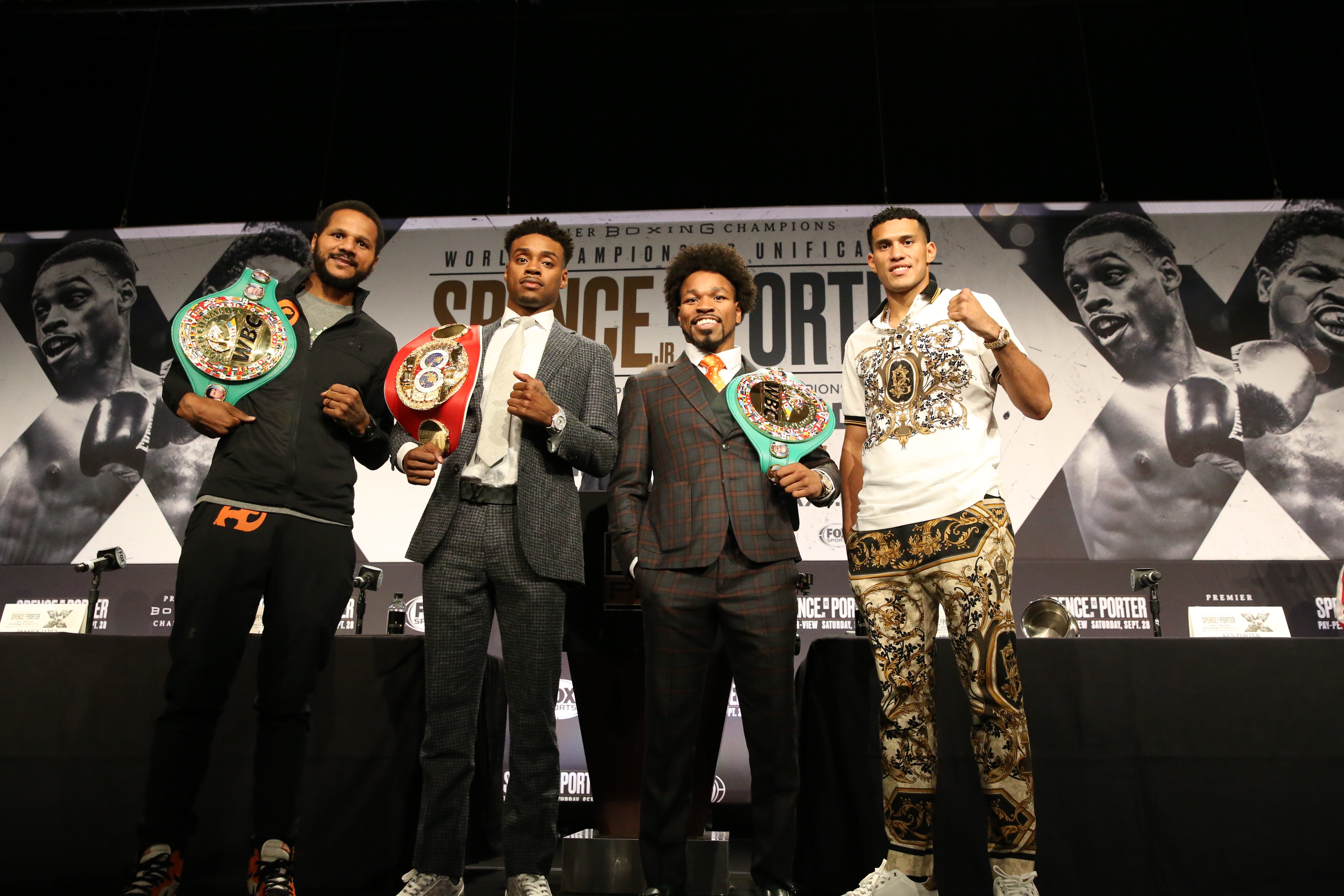 “This is the perfect time for this fight. I’m getting stronger every day. Dirrell feels like he has a lot to prove to the fans. So it’s going to be a war as long as it lasts.
This is going to be an amazing card. It’s a stacked card from beginning to end. I want to make a statement and steal the show.
“Dirrell is a great fighter and we’re both ready for what we’re going to do. There’s a respect between us, but I’m going for the knockout. If I don’t, he’s going to get a beating.
“I’m definitely going to make this weight class my home. I have no problem at all making weight. There’s a lot of great fights to be made at super middleweight and we’re going to stay here as long as we can get those fights done.
“As of right now, all of my attention is on Anthony Dirrell. We give him the respect he deserves because he’s a champion at the end of the day. It’s going to take my best to beat him and we’re looking forward to doing it.
“Dirrell has experience, plus some speed and power. He can change from orthodox to southpaw and has a lot of tricks in his book. He’s been in there with some good fighters. But what motivates me the most is that he’s never really been hurt and I want to be the first. I know when I put my hands on somebody, I can hurt them.”