In the other co-feature, WBO junior featherweight champion Emanuel “Vaquero” Navarrete will make the second defense of his title against the undefeated Francisco “Panchito” De Vaca. 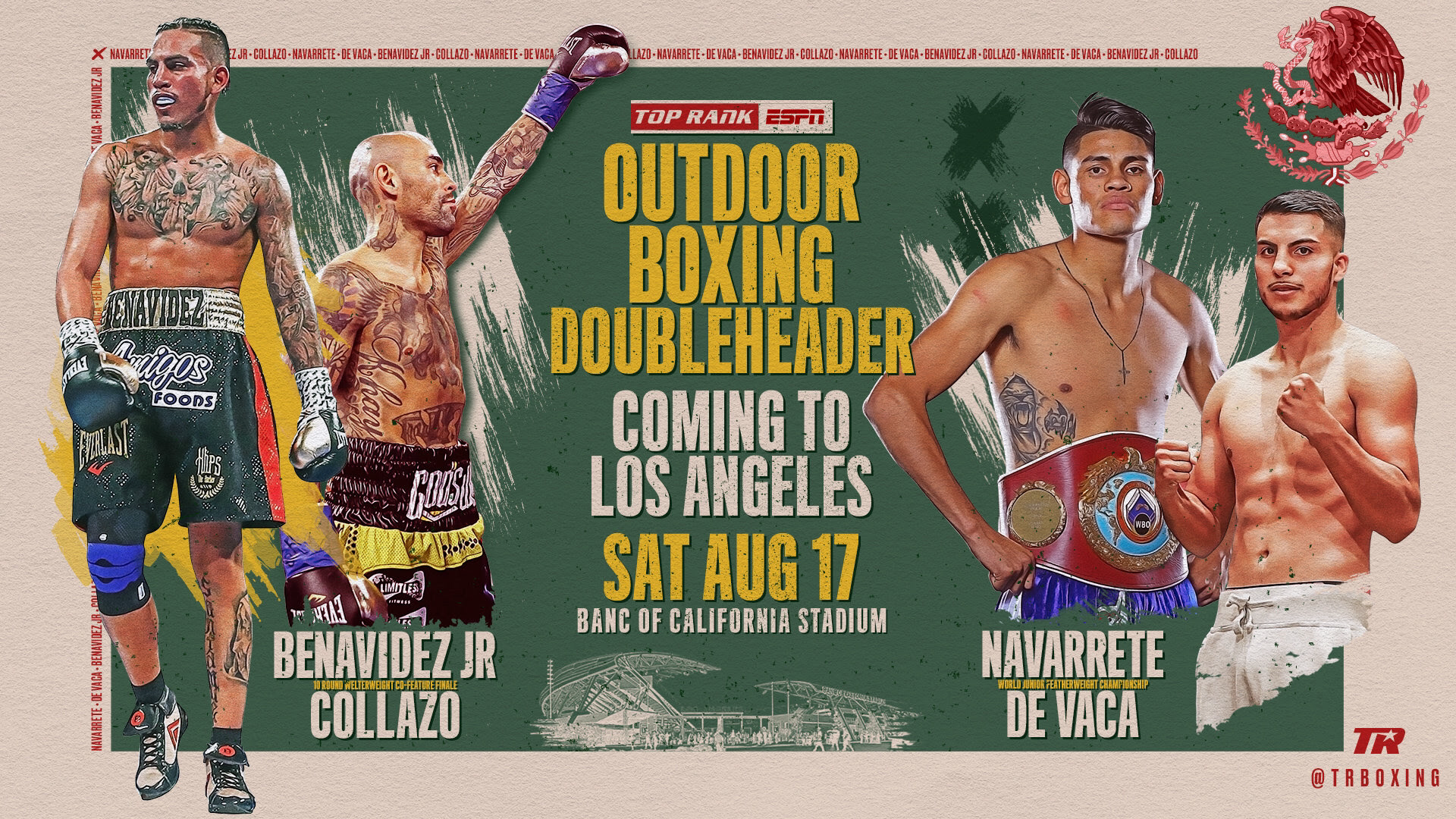 “I am very focused, and I see this as a must-win fight,” Benavidez said. “Collazo has been in the game for a long time and is still a top fighter, but I am going to push him towards retirement. He looks good for his age, but trust me, youth will prevail when we fight.”

“I’m coming for everything they said I couldn’t have,” Collazo said. “Talk is cheap. I’m here to show that I’m still one of the top welterweights in the world.”

Benavidez (27-1, 18 KOs) is coming off his most notable performance to date, a spirited effort in a 12th-round TKO loss versus pound-for-pound great Terence Crawford in Crawford’s hometown of Omaha, Nebraska. Crawford-Benavidez was ESPN’s most-watched boxing event of 2018, and now, the Phoenix native has a chance to return to title contention with a victory over Collazo (39-7, 20 KOs). A native of Brooklyn, New York, Collazo held a piece of the welterweight title from 2005-2006 and has remained a top contender in the 13 years since he lost his belt via controversial decision to Ricky Hatton. Collazo has won three in a row since falling short in a title challenge to Keith Thurman, most recently edging Samuel Vargas by split decision on St. Patrick’s Day at Hulu Theater at Madison Square Garden.

Navarrete (27-1, 23 KOs) has won 22 consecutive bouts dating back to 2012, but his breakthrough came last December when he upset Isaac “Royal Storm” Dogboe via unanimous decision to win the WBO junior featherweight title. Five months later, in Tucson, Arizona, he repeated the deed, this time knocking out Dogboe in the 12th round. A native of San Juan Zitlaltepec, Mexico, Navarrete had a reported 108-7 record in the amateur ranks and comes from a family of fighters. His uncle, Pedro Navarrete Sr., and two of his cousins, Pedro Navarrete Jr. and Johnny Navarrete, fought as professionals.

De Vaca (20-0, 6 KOs) was born in Michoacán de Ocampo, Mexico, and moved to Phoenix, Arizona, as a small child. All but one of De Vaca’s pro fights have taken place in the Phoenix area, where he has developed into one of the region’s most popular attractions. The 24-year-old boxer-puncher made his Top Rank debut last August in Glendale, Arizona, outlasting Jesus Serrano by unanimous decision in a crowd-pleasing brawl. He last fought in February at the Celebrity Theater in Phoenix, where he shut out Ernesto Guerrero over eight rounds.

“This is a great opportunity to defend my title against an exciting fighter like De Vaca,” Navarrete said. “I’ve worked hard to prove myself as a true champion, and I won’t let anyone take that away from me. It’s going to be a great night outside in Los Angeles, and whenever you have two Mexicans in the ring, you can expect a battle.”

“This is the fight of my life,” De Vaca said. “I am going to show my Mexican heart and prove to the world that I belong on the world stage. I’m not going to talk any trash. I have a lot of respect for Emanuel Navarrete, but his reign will end on August 17.”