LOS ANGELES (July 9, 2019): World War III has been officially been declared in the 118-pound division as Joshua “The Professor” Franco (15-1-1, 7 KOs) and Oscar “El Jaguar” Negrete (18-2-1, 7 KOs) will meet for a third time on the undercard of Ortiz vs. Orozco for the unified NABF and WBA International Bantamweights Titles. The event will take place on Saturday, Aug. 10 at The Theatre at Grand Prairie in Texas and will be streamed live on DAZN.
In their first fight, Franco and Negrete fought toe-to-toe for 10 rounds in a fight that ended via controversial split draw in October 2018. However, the controversy did not end there. The two met again in April of this year in another barnburner that Franco won via split decision. Franco believes he won the rematch clearly, while Negrete claims he was robbed. The two will meet one last time to bring even more fireworks as both men are eager to erase all doubts.
Franco is a 23-year-old bantamweight contender of San Antonio, Texas who brings an exciting and intelligent style to the ring. Franco, under the tutelage of renowned trainer Robert Garcia, has maintained a near-perfect record since debuting as a professional in 2015. Though suffering a defeat in 2018, Franco bounced back immediately a win against Isao Carranza and two-action packed fighters against Negrete. 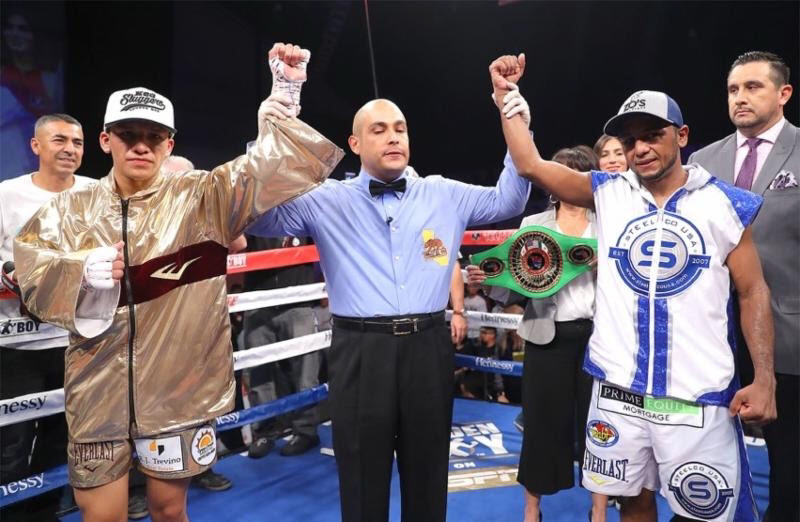 PHOTOS BY: TOM HOGAN FOR GOLDEN BOY PROMOTIONS
“I’m excited to have this third fight,” said Joshua Franco. “I think it’s good for boxing to have trilogies like this because they bring a lot of excitement and attention to the sport. I’ve been training really hard, and I’m ready to show everyone why I believe I won the first two fights. With a win, I’ll be more than ready for a world title shot.”
Negrete, of Tierraalta, Colombia, built an impressive resume by defeating tough opponents in both the bantamweight and super bantamweight divisions. In his most important victory to date, the 31-year-old defeated Sergio Frias for the NABF Bantamweight Title in the main event Golden Boy Boxing on ESPN in June 2017. Negrete then suffered the first loss of his career in a valiant effort against WBC Super Bantamweight Champion Rey Vargas in December of that year. Negrete bounced back with a victory against Dhiul Olguin and two tough fights against Franco, both of which he feels he won.
“I feel happy and motivated to once again fight against Joshua Franco to get back what rightly belongs to me, the two belts,” said Oscar Negrete. “The truth is that after they gifted Franco that fight, I felt robbed and disappointed. But now it’s time to clarify everything.”
Hector “El Finito” Tanajara (17-0, 5 KOs) of San Antonio, Texas will defend his USNBC Lightweight Title in a 10-round clash.
Travell “Black Magic” Mazion (14-0, 12 KOs) of Austin, Texas will participate in an eight-round super welterweight clash against Jeremy Ramos (11-6, 4 KOs) of Bayamon, Puerto Rico.
Alex Rincon (6-0, 5 KOs), the hard-hitting southpaw of Dallas, Texas, will fight in a six-round battle.
George Rincon (6-0, 3 KOs) of Dallas, Texas will return in a six-round super lightweight battle against Rafael Reyes (9-15, 6 KOs) of Reynosa, Mexico.
Joshua Juarez (8-0, 4 KOs) of Laredo, Texas will participate in a six-round light heavyweight fight.
Newly-signed Golden Boy prospect Tristan Kalkreuth of Duncanville, Texas will make his professional debut in a four-round light heavyweight fight.
Opponents for this card will be announced shortly.
Ortiz vs. Orozco is a 12-round fight for the WBA Gold Welterweight Title presented by Golden Boy. The event is sponsored by Tecate, “THE OFFICIAL BEER OF BOXING,” and Hennessy “Never Stop. Never Settle.” The event will take place on Saturday, Aug. 10 at The Theatre at Grand Prairie in Texas and will be streamed live on DAZN.