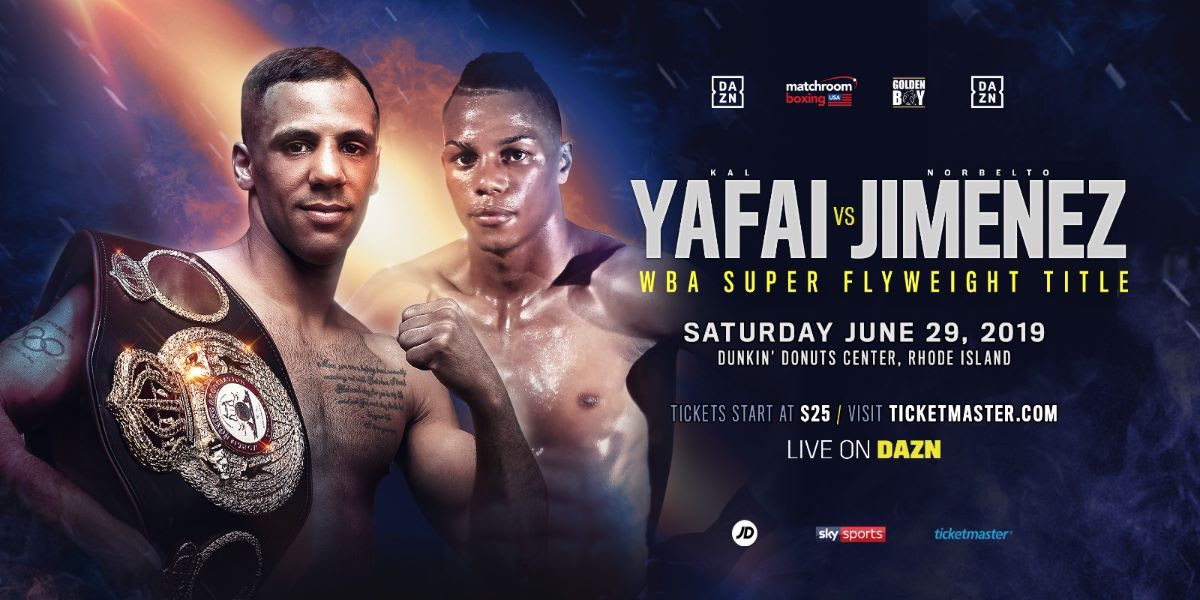 Kal Yafai will defend his WBA World Super-Flyweight title against Norbelto Jimenez on Saturday June 29 at the Dunkin’ Donuts Center in Providence, Rhode Island, live on DAZN in the US and on Sky Sports in the UK.

Yafai (25-0 15 KOs) puts his title on the line for the fifth time and the Birmingham star returns to action following a points win over Israel Gonzalez in Monte Carlo in November. The unbeaten champion makes his second appearance on American soil after forcing David Carmona to retire after dominating the Mexican over seven rounds.

Yafai’s next obstacle in the way of the unification bouts he desires comes in the shape of mandatory challenger Jimenez (29-8-4 16 KOs), the Dominican man is unbeaten in 30 fights after turning his career around from early defeats, and the 28 year old will fight for the WBA belt for the second time having drawn against previous champion Kohei Kono back in 2014.

“I’m very excited to be back in action,” said Kal Yafai, who turns 30 today. “After my last fight I’ve got to go out there and win and look good doing so.

“He’s obviously going to be a good fighter because he’s my mandatory. I know he boxed for the World title nearly four and a half years ago against Kono and he drew in Japan. Since then he hasn’t really boxed fighters of a high calibre. It’s a long time to box guys at that level and then step up and fight someone like me. I’m looking to show everyone that I’m one of the finest World champions out there and make my mark in America.

“I fought in America last year and we all thought we were going to fight Jerwin Ancajas afterwards, the IBF Champion, but they didn’t seem to be up for it at all. It’s been a bit frustrating at times, and I had a hand injury earlier this year. After my last fight, and especially the performance, it’s given me that hunger to want it even more, to stay at the top and get those big fights. I think at times I’ve got a bit complacent, before my last fight, and that’s completely changed for this one so I’ll be at my game 100 per cent.

“It was a disappointing night for me in Monte Carlo. I didn’t perform how I’d normally like to perform. Everyone can see that that wasn’t myself in there that night but like I said on the night, I don’t like to make excuses. I get in the ring and I fight, and when I get in the ring to fight I should beat them up, at my best, and if I’m not at my best I shouldn’t be in the ring fighting. There’s a few things that I could have done better, but I’ve rectified all of my issues that I had going into that fight and hopefully I can show that it was just an off night in my last fight.”

“I want to say thank you for the opportunity to Team Yafai because they waited until the WBA ordered the fight and I became a mandatory challenger,” said Norbelto Jimenez. “I feel like they are underestimating me, and that make me happy because it motivates me every day much more. I thank Bélgica Peña of Shuan Boxing for the great support of many years, and also thanks to Golden Boy who is allowing me to be part of their family.

“It has been a long wait after fighting to a draw in Japan in my first world title opportunity. And now I just want to say that on June 29, the Dominican Republic will have a new world champion, and his name is Norbelto “Meneito” Jiménez.”

“This is a big fight for Kal, especially in light of what lays ahead,” said promoter Eddie Hearn. “If he can beat Jimenez on June 29, it’s very likely his next fight will be a unification with pound for pound star Juan Estrada, so he must get the job done in Providence. It’s amazing that he now stands as Britain’s longest reigning World champion and we are expecting a top class display on a huge night of boxing.

Yafai’s clash with Jimenez is part of a blockbuster night of action in Providence as hometown hero Demetrius Andrade defends his WBO World Middleweight title against Poland’s Maciej Sulecki, while former Heavyweight world ruler Joseph Parker fights for the first time under his new deal with Matchroom Boxing USA.

Tickets are on sale NOW – with tickets starting at just $28 (including fees) from https://www1.ticketmaster.com/event/010056AAED7788D1?brand=dunkindonuts&camefrom=cfc_dd_center_boxing19_web