OXON HILL, MARYLAND, May 25, 2019 – Undefeated lightweight sensation Devin Haney capped off an action-packed evening of boxing on DAZN from the MGM National Harbor in Oxon Hill, Maryland, with a stunning seventh-round knockout. Making his DAZN debut, Haney (22-0, 14 KOs) impressed a raucous crowd with his highlight-reel stoppage of Mexico’s Antonio Moran (24-4, 17 KOs). In the heavyweight co-feature of the evening, Croatia’s Filip Hrgovic (8-0, 6 KOs) scored a brutal first-round technical knockout against Gregory Corbin (15-2, 9 KOs) of Dallas, Texas. Michael Hunter (17-1, 12 KOs) of Las Vegas kicked off the evening’s main card in dramatic fashion with a scintillating second-round technical knockout victory over Brazil’s Fabio Maldonado (26-3, 25 KOs) to continue his unbeaten streak at heavyweight. On the preliminary card of the evening, Jessica McCaskill (7-2, 3 KOs) and Anahi Sanchez (19-4, 11 KOs) wowed the Maryland crowd with a thrilling slugfest. McCaskill emerged with a unanimous decision victory to unify the WBA and WBC Women’s World Super Lightweight titles. 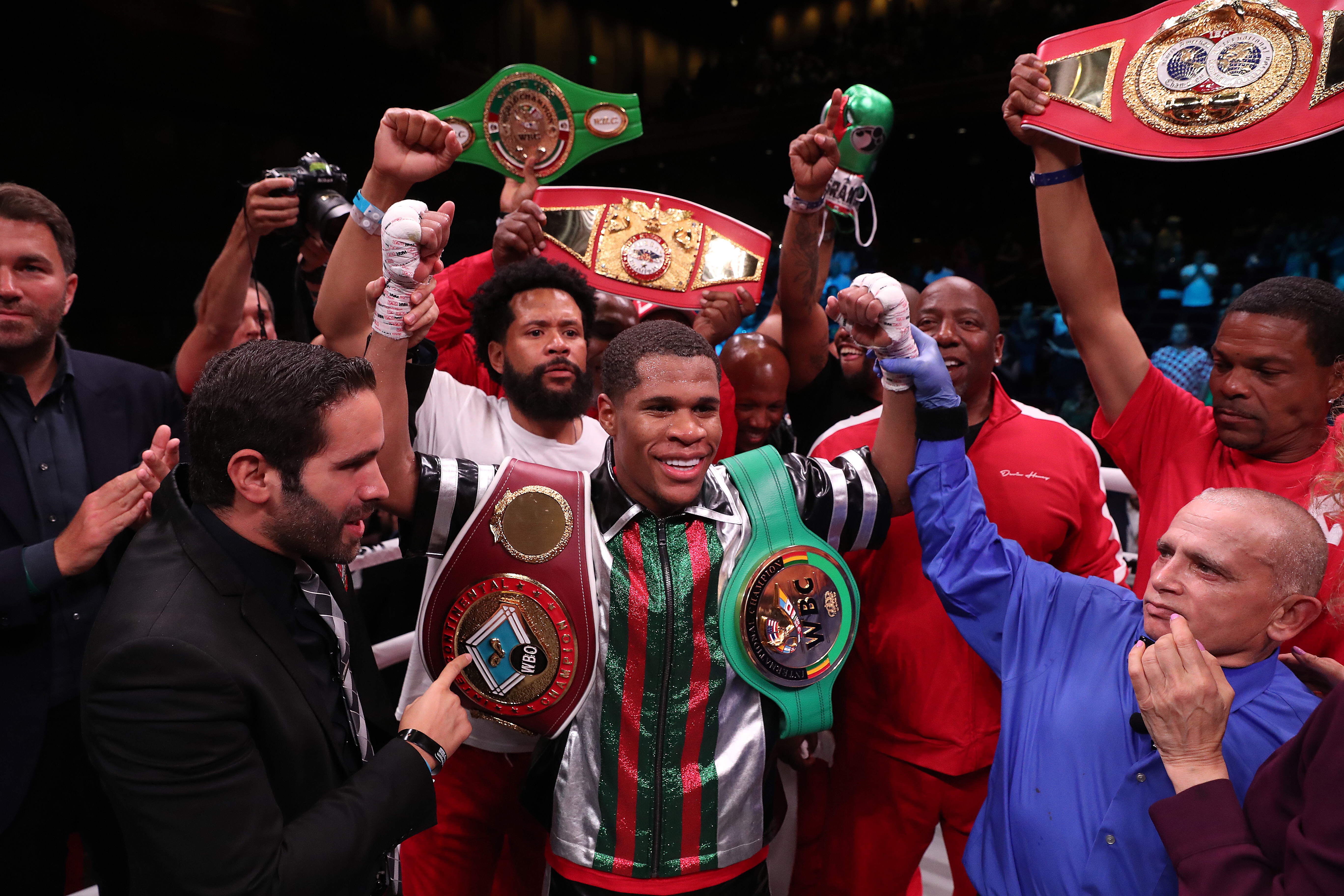 Photos By: Ed Mulholland For Matchroom Boxing USA
Devin Haney
On his performance: “I want to thank God, my dad, Eddie Hearn, my whole team behind me. Coming into this fight, I wanted to make a statement. There were a lot of rumors going around that I didn’t have any punching power and I can’t knock anyone out. But as you see, I can. I went in there and broke my opponent down and then knocked him out.” 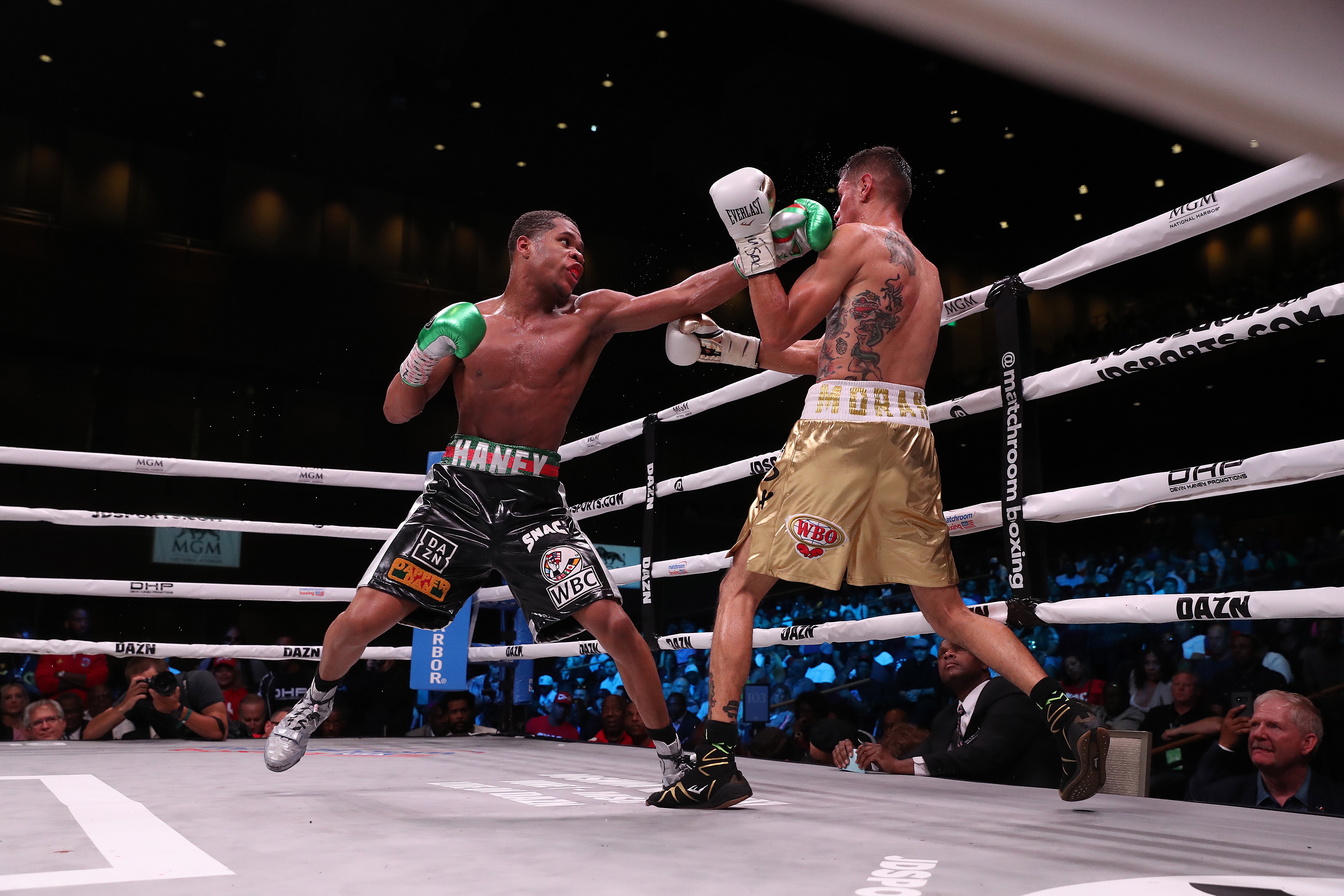 On the moment he knew the knockout was possible: “I know I got him hurt with that first shot. My dad always tells me, when you get him hurt go right to the body. So I went to the body and then went over the top. I knew when I landed and saw his facial expression that he was out.”
On his abilities on offense and defense: “All of the above. I am overall a great fighter. I have speed, I have power, I have head movement. Like I said before, I have many tools in the toolbox. It just depends on what I want to bring out that night. I am able to make adjustments the whole fight, too.”
On what he did to neutralize Moran: “Honestly, I don’t think a lot of the guys that I have been fighting actually have more experience than me. I have been in there with world class fighters. They say that sparring doesn’t count but I believe it does. I have put in many rounds with many different world champions so I believe that I have the experience factor.”
Eddie Hearn

On Devin’s performance: “It was unbelievable. Where I come from in England, if we had a star like this, the country would be going mad. So you guys need to get behind Devin Haney because let me tell you, America has a superstar on their hands. He is 20 years old. He is 22-0. They say he doesn’t carry power but he is taking guys out like that. Jose Pedraza struggled against that guy, a champion who went the distance with Lomachenko. That was like watching an artist draw a beautiful picture and then at the end just sign his name off and walk away into the night. This is a beautiful, beautiful start. We are so lucky to have him with Matchroom and DAZN. Devin Haney Promotions is a great team to work with and we are going to enjoy watching him go all the way to the top – winning world titles in different divisions. The WBC have ordered him to fight Zaur Abdullaev in a title eliminator to fight the winner of Lomachenko vs. Campbell. Devin wants to fight them all – Teofimo Lopez, another guy called Gervonta Davis, Ryan Garcia. These are the super-fights that Devin Haney will be in over the next few years. If it’s Maryland, if it’s Las Vegas, if it’s the Bay Area. The whole United States needs to get behind this guy. He is a superstar.”
Filip Hrgovic
On his quick performance: “Greg Corbin is a really good fighter. Thank you to him for taking on this challenge. It is an honor for me to box in this great country and arena. Thank you to all the fans who came out here. You didn’t have time to see the best Hrgovic. I look forward to big fights, strong opponents and to give the U.S. really good fights.”
On facing Joe Joyce next: “I told Eddie Hearn I will fight anyone, anywhere, anytime in the heavyweight division.”
Michael Hunter
On his performance: “You know, I just tried to use my quickness, my speed and my ability. I knew I had the agile footwork over him so I just wanted to use that to be impressive.”
On his power remaining while fighting at heavyweight:  “It is the heart where I win at. I run them down. We are all over 200 pounds, but the difference is that I just have a bigger heart than everyone else.”
On fighting Anthony Joshua and what’s next:  “I would love that fight at any time. Any mandatory, anytime, really. I will take any fight anytime. I am here to stay and I will take on anyone. I want to fight Joshua next. He is the cash cow and it’s an easy fight to make, we are both on Matchroom and DAZN. It should be easy to make that next. I’d like to fight Dillian Whyte if I couldn’t get AJ next.”
Jessica McCaskill
On her performance: “It was for sure nonstop. I got punched in the throat so excuse my voice. But Anahi has great accuracy and solid power. She sure wasn’t afraid to fight and mix it up. The scorecards were a little drastic and I don’t like when that happens to me when I go somewhere else so respect to Anahi.”
On a possible rematch: “I have to talk to Eddie Hearn and my manager about that. But like I said, it was a great fight, she is a great fighter and I enjoy a good challenge.”
Anahi Sanchez
On the scorecards: “I don’t think the judges gave me any love on the scorecards. I was getting hit low, I was getting headbutted but I didn’t get any love from the judges or the referees.”
12-Round Lightweight Fight @ 135 lbs.
Devin Haney (22-0, 14 KOs) defeats Antonio Moran (24-4, 17 KOs) by KO at 2:32 of Round 7.
10-Round Heavyweight Fight
Filip Hrgovic (8-0, 6 KOs) defeats Gregory Corbin (15-2, 9 KOs) by TKO at 1:00 of Round 1.
10-Round Heavyweight Fight
Michael Hunter (17-1, 12 KOs) defeats Fabio Maldonado (26-3, 25 KOs) by TKO at 1:45 of Round 2.
10-Round Super Lightweight Championship Unification Fight
Jessica McCaskill (7-2, 3 KOs) defeats Anahi Sanchez by unanimous decision.
(99-91, 98-92, 96-94)
Boxing on DAZN returns next Saturday when undefeated global superstar Anthony Joshua defends his WBA, WBO, IBF and IBO World Heavyweight titles against dangerous challenger Andy Ruiz, Jr. Joshua’s United States debut on June 1 will take place under the bright lights at Madison Square Garden with action kicking off at 5:30 p.m. ET.
For more information, fans can follow DAZN’s U.S. social channels: @DAZNUSA on Facebook, @DAZN_USA for Twitter, and DAZN_USA for Instagram.
About DAZN: 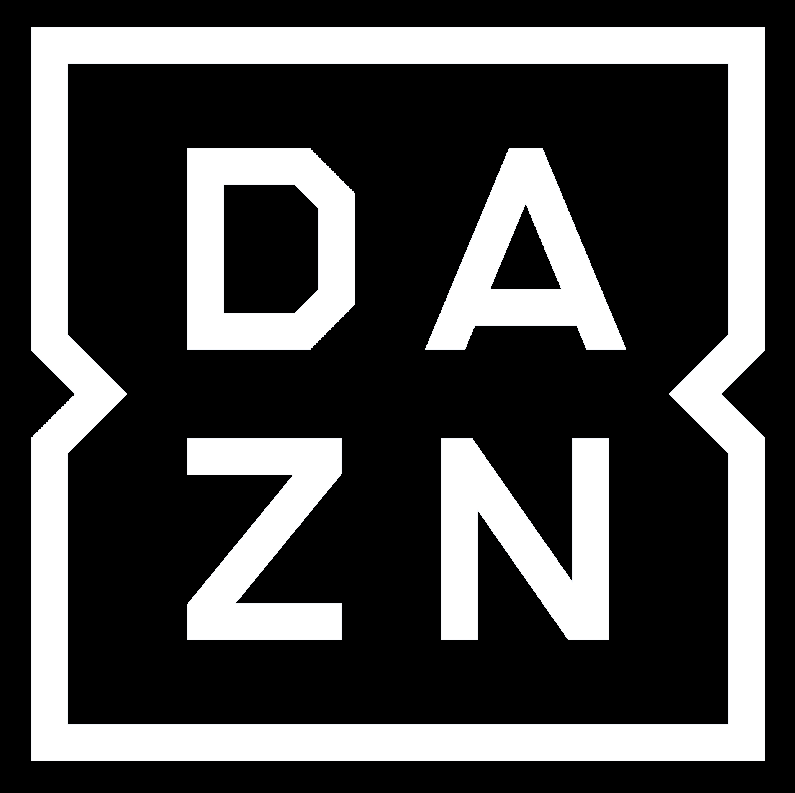 DAZN is the largest global sports streaming platform in the world. Since launching in 2016, DAZN had expanded across four continents with the service available in the United States, Canada, Germany, Austria, Switzerland, Italy, Spain, Japan and Brazil. DAZN guarantees no long-term contract, no bundles, just affordable access to all the service’s sports on connected devices including smart TVs, smartphones, tablets, games consoles and PCs. In the U.S., DAZN has made its mark as an attractive alternative to pay-per-view within the combat sports industry. The platform features more than 100 fight nights per year from Matchroom Boxing, Golden Boy Promotions, GGG Promotions, Bellator MMA, the World Boxing Super Series and Combate Americas. DAZN also features live MLB action each day of the season with its new daily show, ChangeUp.
About Devin Haney Promotions:

Based in California, Devin Haney Promotions (DHP) is a first-class promotional company headed by boxing phenom, Devin “The Dream” Haney. The company was founded in September of 2018. Devin Haney at 19-yrs old became the youngest active fighter/promoter in boxing history. DHP has a commitment to bring fans the most exciting shows with some of the best fighters in the world. Globally, DHP is respected as a premier promoter in boxing.