(PRESS RELEASE) LAS VEGAS – April 27, 2019 – Robert Easter Jr. and Rances Barthelemy fought to a split-draw in their matchup for the vacant WBA Lightweight World Title Saturday on SHOWTIME from The Chelsea inside The Cosmopolitan of Las Vegas.

The challenging fight to score was ruled 115-113 Barthelemy, 115-113 Easter and 114-114. The WBA 135-pound title remains vacant following the split decision.
With both former world champions needing a win in a crossroads affair, neither fighter was able to pull the trigger in a matchup of talented counterpunchers. The tall, rangy lightweights competed on the outside for much of the 12-round bout, and while both relied on their reach to keep their opponent at bay, they failed to land many effective shots from the outside.
The switch-hitting Cuban Barthelemy (27-1-1, 14 KOs), who fought defensively for most of the fight, transitioned to mostly southpaw in the third. The former two-division world champion’s most effective punches appeared to be body shots from the southpaw stance, while Easter (21-1-1, 14 KOs) was at his best when he countered with his right.
As the 12-round affair progressed, the corners of both fighters – Robert Easter Sr. and former Cuban champion Joel Casamayor – pleaded with their pugilists to increase their output to little avail. Neither fighter landed 10 punches in any round, and while Easter was slightly more active they combined to throw just 743 punches. They combined to land just 106 total punches.
“I feel I did enough to win this fight but the judges saw it differently,” said Easter, who was fighting for the first time since losing to pound-for-pound great Mikey Garcia in a unification last summer. “They saw it a different way. Rances is a crafty fighter, an elusive fighter. I tried to take the fight to him but he wouldn’t take it. It was hard to land my shots.” 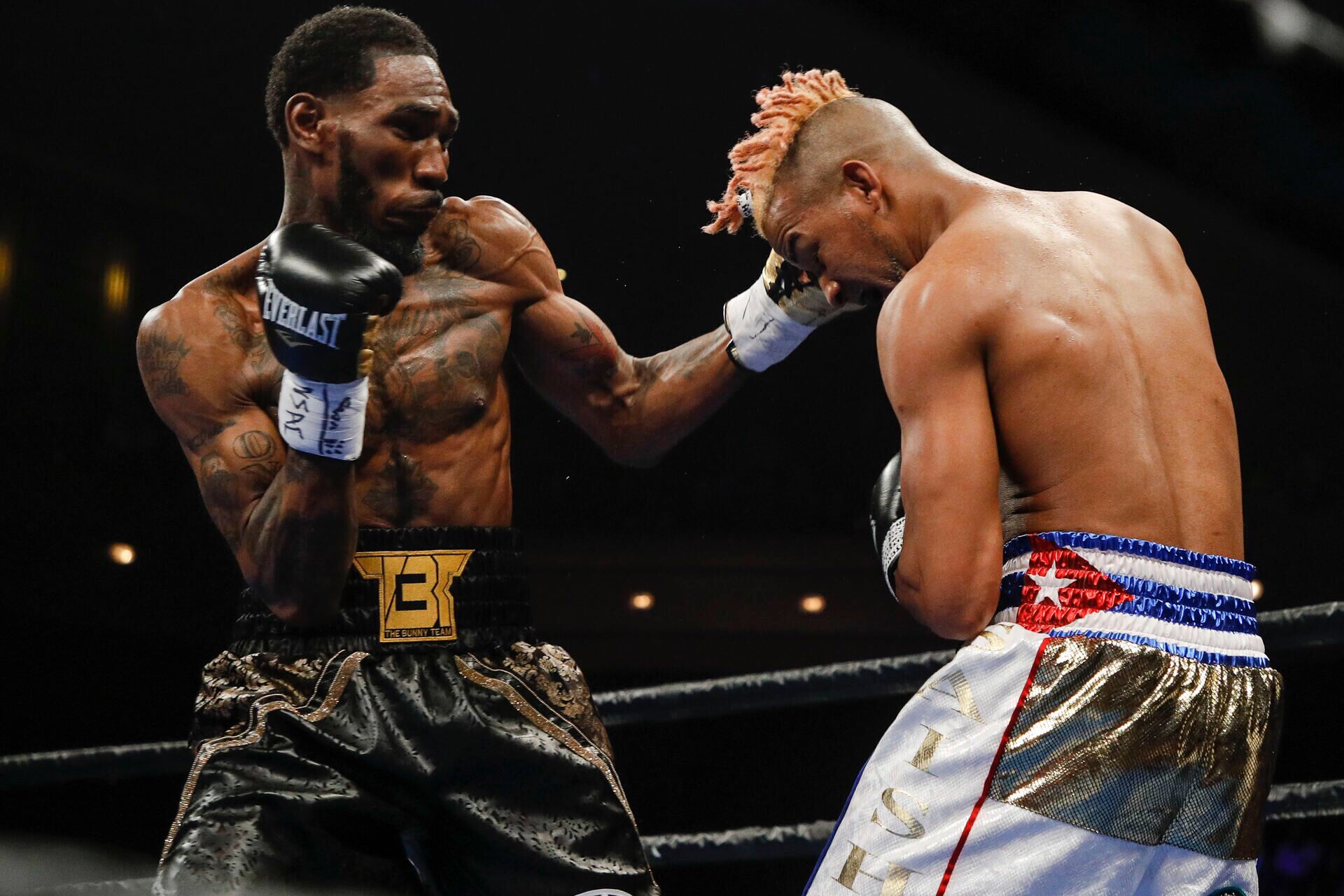 PHOTOS BY: ESTHER LIN FOR SHOWTIME BOXING
Barthelemy, who was returning to lightweight after losing a rematch to Kiryl Relikh in his bid to become Cuba’s first three-division world champion, was frustrated with the decision.
“Robert was absent in the ring tonight,” Barthelemy said. “I wanted him to land his right and he didn’t. I wanted him to come forward and he didn’t. We were prepared for a different Robert Easter – the one that attacks – but he didn’t show up so I couldn’t deliver my strategy. 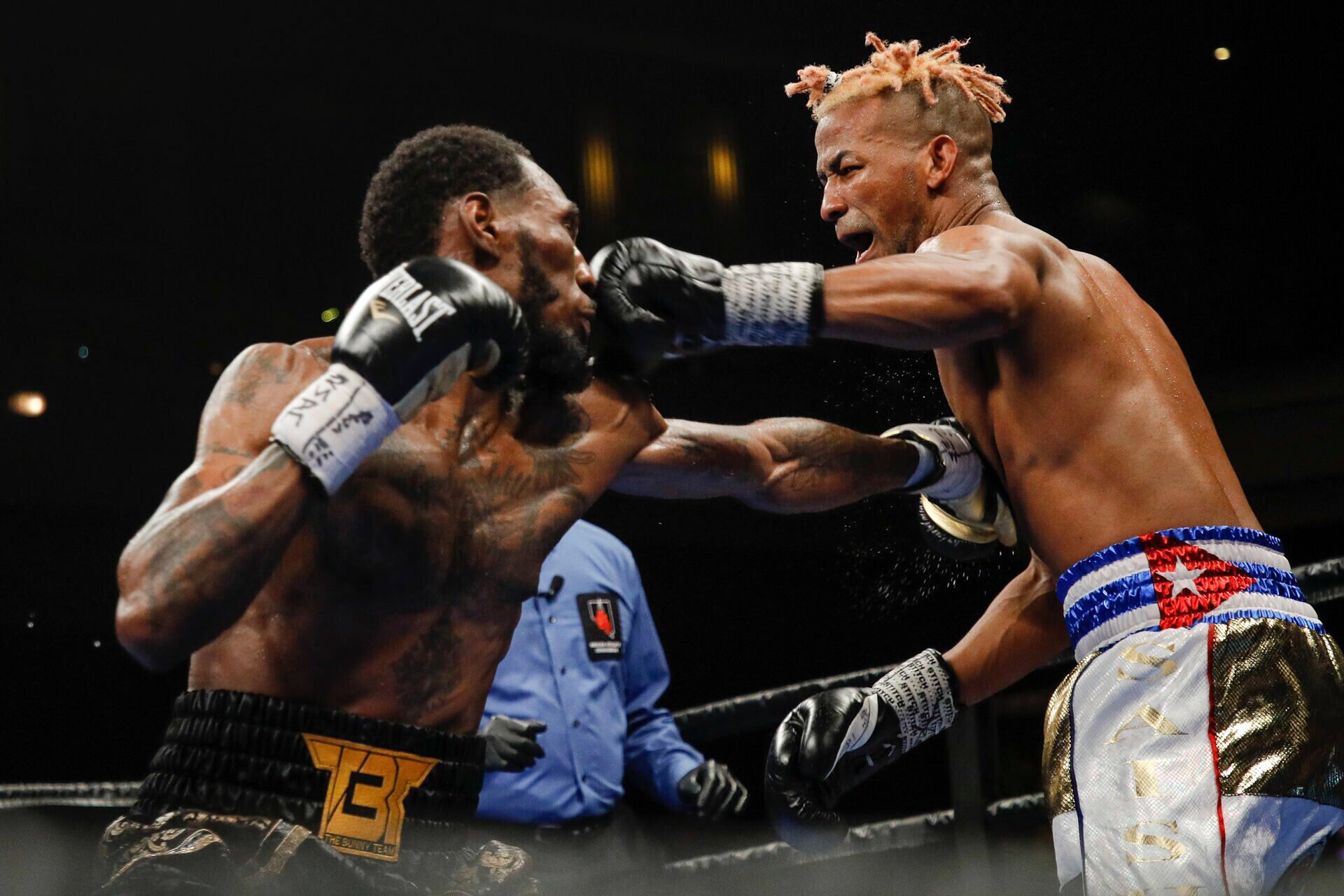 “I landed the cleaner and more accurate shots. I feel I threw more punches. I was the busier fighter. I won the fight. I think this was a missed opportunity for me. I really feel I won this fight.”
Former 140-pound world champion Viktor Postol outclassed Mohamed Mimoune in a WBC Super Lightweight Eliminator, winning via unanimous decision 98-92, 97-93, 99-91 in the SHOWTIME BOXING: SPECIAL EDITION co-feature. 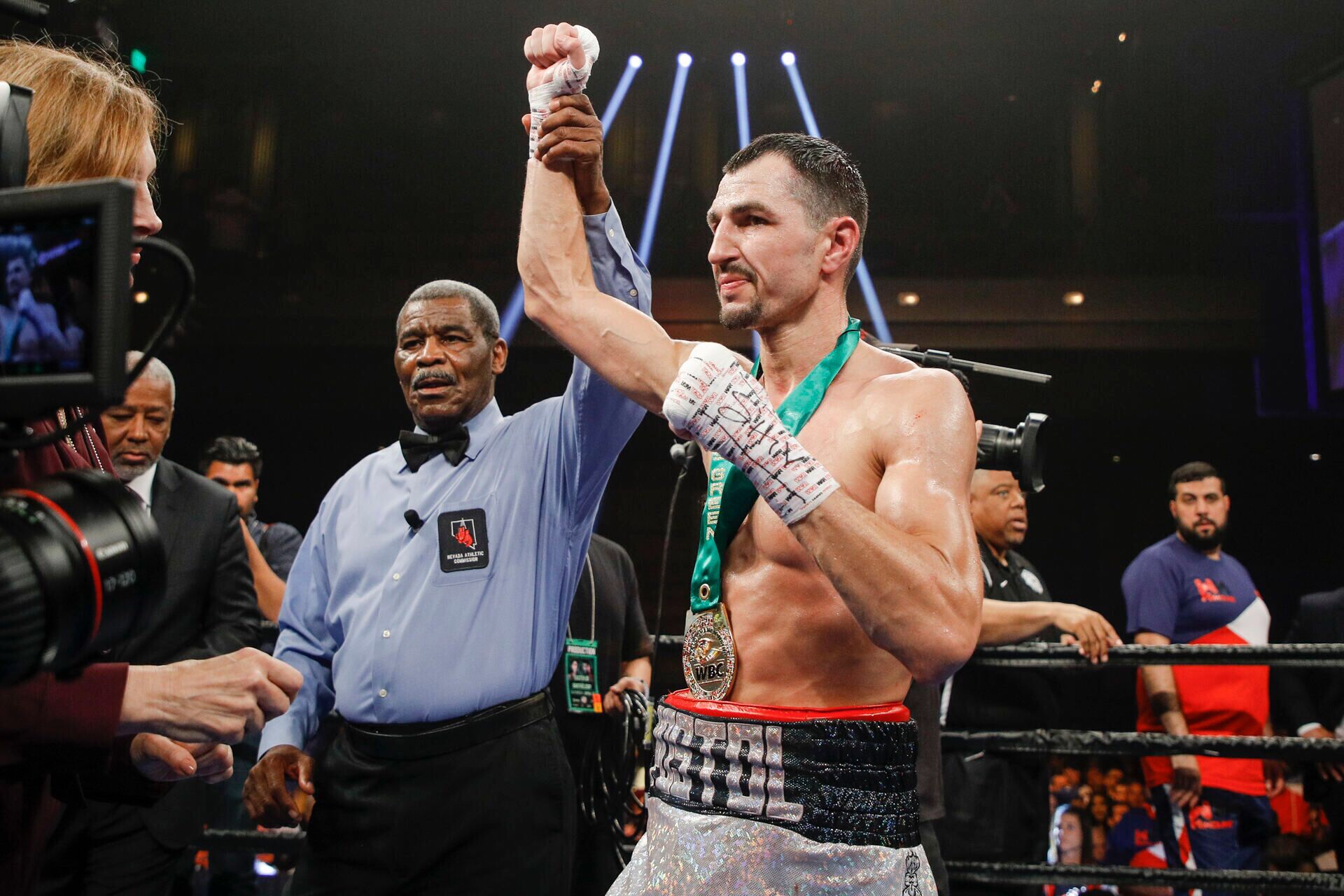 Postol fought off a stiff jab and utilized his reach advantage to keep the fight at range. The Ukrainian, who was working with Hall of Fame trainer Freddie Roach, was the more active fighter from bell to bell, throwing 587 punches compared to just 306 for the French Mimoune. While Mimoune was elusive and able to slip many of Postol’s power shots, he never left himself in a position to effectively counter his taller and more aggressive opponent. The southpaw Mimoune (21-3, 2 KOs) averaged just 30 punches per round and was off balance for much of the fight, throwing wide looping shots that rarely landed.
After the fight, Postol attributed his victory with being able to remain disciplined and stick to the game plan of Roach.
“I always try to be disciplined,” Postol said. “I did well tonight. My opponent’s style was a little awkward, but I did okay. If I could fight a guy like (Terence) Crawford, I can handle Mimoune. And I did.”
After the fight, Postol, who’s only losses came against top fighters Terence Crawford and Josh Taylor, promised to chase the elite of the 140-pound class.
“I want the next big fight,” Postol said. “Doesn’t matter who – WBC Champion Jose Ramirez would be a great choice. I was away for two years so I was a little bit worried before, but now I feel like I’m back. I’m 100 percent back and ready for the next test.”
Hall of Famer Steve Farhood, who served as unofficial ringside scorer for the SHOWTIME telecast, gave Postol all 10 of the rounds in the WBC Eliminator.
In the opening bout of the telecast, fast-rising heavyweight Efe Ajagba added another knockout to his resume with a second-round TKO of previously once-beaten Michael Wallisch. 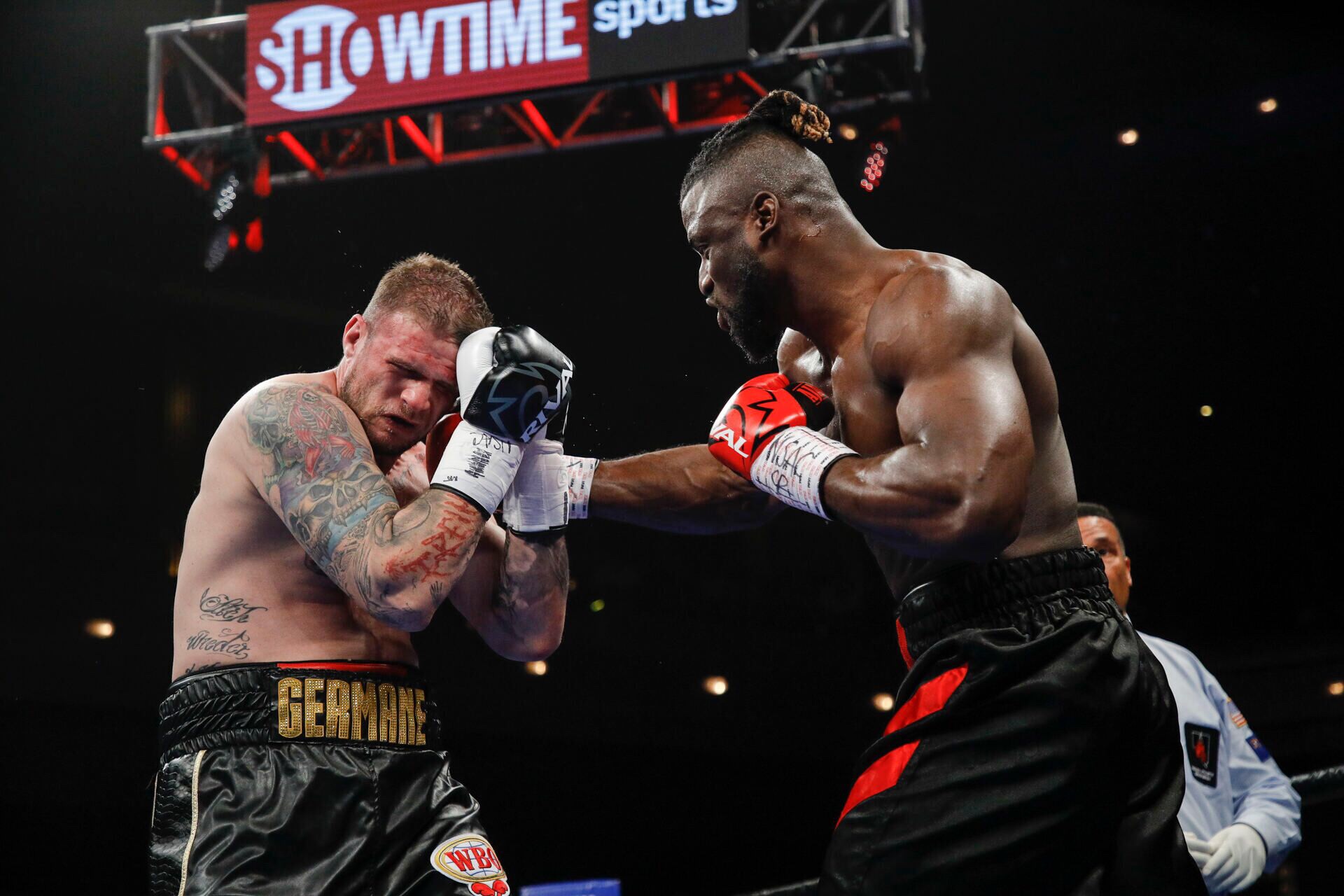 Ajagba (10-0, 9 KOs) was aggressive from the outset, throwing nearly 100 punches in the opening round. Utilizing a steady diet of 1-2 combos, Ajagba landed at will in the second against Wallisch, who fought behind a high guard but couldn’t prevent the Nigerian’s power shots from landing. After eating a series of combos in the second, Wallisch (19-2, 12 KOs) took a knee and was given time to recover after Ajagba appeared to throw and land a punch with his opponent on his knee. Wallisch got back up but was defenseless against Ajagba’s onslaught, forcing referee Tony Weeks to step in to stop the contest at 1:40.
“I took my time in there, I used my jab a lot and it worked,” said Agjaba, who landed 43 percent of his power shots. “When I shot my right hand and he took it, I decided to keep unloading. I kept throwing combinations and I knew I was hurting him so I kept doing it.
“I’m happy to be training with Ronnie (Shields). He is one of the best trainers in the world. He helped me with my jab and he’s helping me develop as a fighter.”
Said trainer Ronnie Shields: “I think we still have a lot to learn. You saw he’s a busy guy and for a big guy to throw 93 punches in the first round, it’s a lot. He may be about a year away to becoming a contender. He will get there.”
Tonight’s live event was promoted by Mayweather Promotions and TGB Promotions in association with About Billions Promotions.
An encore presentation of the tripleheader will air Monday at 10 p.m. ET/PT on SHOWTIME EXTREME and will be available via the network’s On Demand platforms.